Amazon offers inside look at Greenwood facility during COVID-19 pandemic

The COVID-19 pandemic forced lifestyle changes, including how people shop as stores closed and stay-at-home orders went into effect. 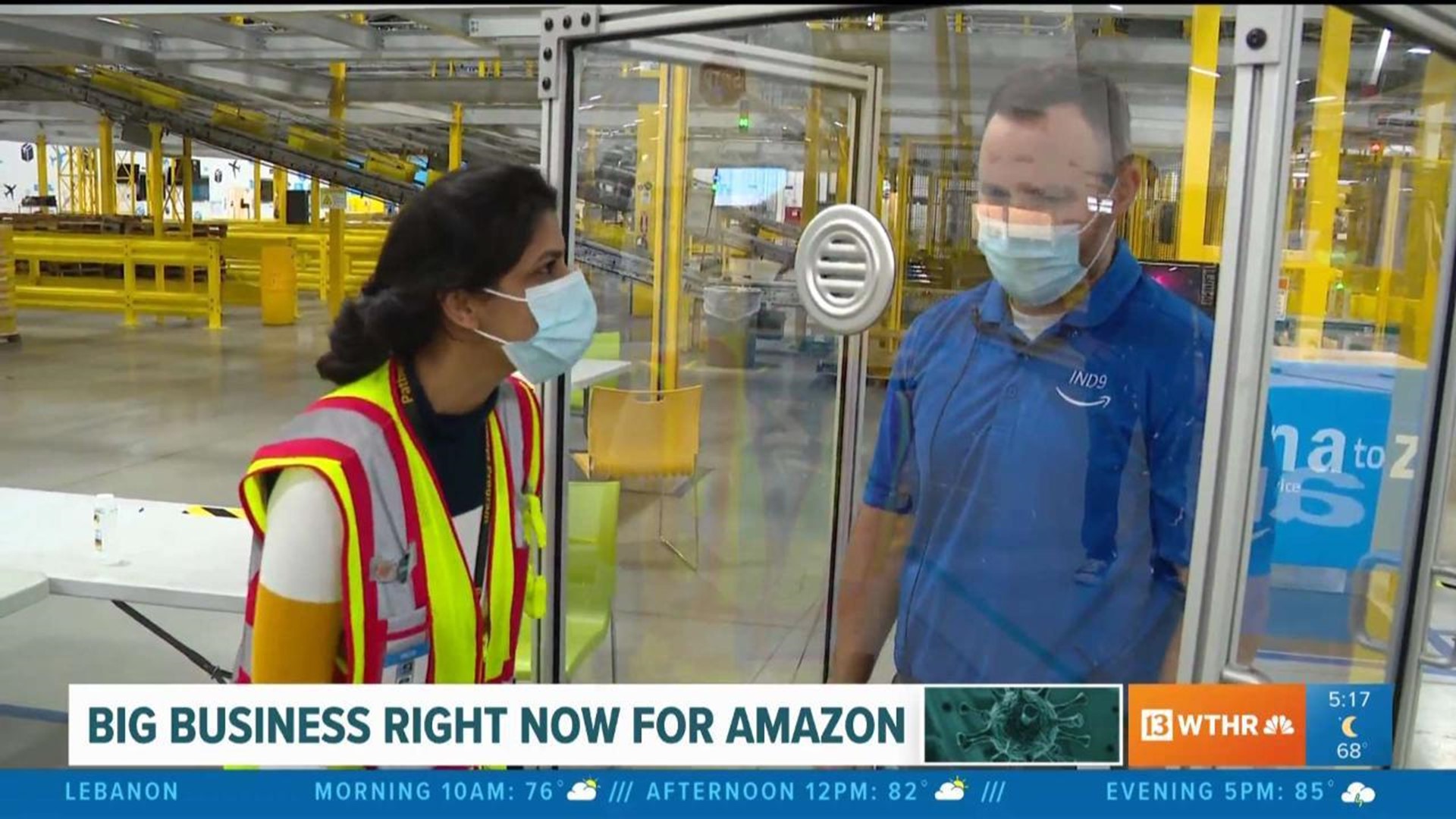 Online retailers like Amazon noticed a boom in sales and demand. Since the company hired more people to keep up with business, there have been nationwide concerns over the safety of employees.

The company gave 13News an exclusive look inside to see the changes to protect employees at one of the Indiana locations.

The Amazon facility in Greenwood, known as IND9, opened in the fall of 2019 and employs more than 1,000 people. Matt Rawlings is the Operations Manager at the Greenwood facility.

"I think when you build any type of building, you don't think about it in terms of 'we have to have 6 feet of distance,' so there were some things we had to change to make all of this work," Rawlings said.

The Johnson County location mainly receives items from vendors, processes them, and then distributes them to nearly 50 different warehouses. That means customer orders aren't typically processed at the Greenwood building.

Before the tour started, the 13News team had to have their temperature taken just like employees do as soon as they walk in each day and wear a mask. Hand sanitizer and masks were available at the entrance.

Rawlings has been busy making changes, which include moving HR cubicles away from the front entrance to avoid lines. They're now located on the processing floor with plexiglass barriers and speakers.

Timekeeping is also now done on phones, which replaces the traditional time clock and means one less item for a worker to have to touch. Then, there's break time, which used to be a set time for everyone.

"We've now divided that into four groups, so it's a very small group of associates that's in our break room at any given time, and we've reduced our break room capacity by 75 percent in order to maintain that 6 feet," Rawlings said.

Tables and chairs are now spread out around the building for meals and break time.

COVID-19 safety reminders are also posted everywhere, including in Burmese to reach the large population that works at the Greenwood location.

Rawlings said employees have had six hours of new training, including proper measures on social distancing.

"They know exactly what to do to maintain 6 feet of distance and how to get to their workstation so they don't feel like they could bump into another associate for example," he said.

"That's something that has been a real challenge from the very beginning, where we have to change associates' mindsets of how they move throughout the building," Rawlings said.

So, some employees have transitioned their duties to roaming the building and watching the break room to enforce the rules. Rawlings said they can monitor what they see and immediately remind employees to space themselves apart and can offer feedback to management on ways to better distance workers.

IND9 opened in 2019 and processes items from vendors and distributes them to nearly 50 warehouses. (WTHR/Matt McCutcheon)

Amazon says it has tripled the number of custodians, who do a daily disinfecting spray-down of the building.

"I think we've done a really good job responding to our associates and being very clear and upfront with them right off the bat if we have an infection or anything like that, so our associates know about that in real time, and I think that's really important," Rawlings said. "Also, we're being very transparent in communicating the changes in the process, and we try to do it ahead of time so they know next time they come to work, you'll see this, and this is how you respond to it so we can help keep you safe."

Missy Koors, who has worked for the company for two years.

"I was a stay-at-home mom, and then my kids got older, and I said Amazon fascinates me with how they get products to people, so I went for it," Koors said.

She said the changes can be a challenge.

Rolling barricades are now used for close conversations. They are tall, two-sided plexiglass barricades on wheels with a slot for speaking.

This is the second Amazon facility Koors has worked at. She wanted to work at the Greenwood location because it gets her closer to her Rush County home.

When asked if she felt safe at work she said, "Absolutely. I feel safe every day that I come in."

The Greenwood facility is one of 17 Amazon properties in the state. The online giant first came to Indiana in 2008 and has seven fulfillment center warehouses in Indianapolis, Plainfield, Whitestown and Jeffersonville. Other properties include five Whole Foods Market locations, along with a Prime Now Hub and the Amazon Wind Farm Indiana located in Benton County.

In 2019, the company said it employed more than 8,000 people in Indiana and announced an additional 2,000 positions this spring.

Workers are also receiving a temporary increase in pay during the pandemic.