The average wait time to reach a 911 dispatcher more than doubled from 9 seconds in January - March to 25 seconds in June and July. 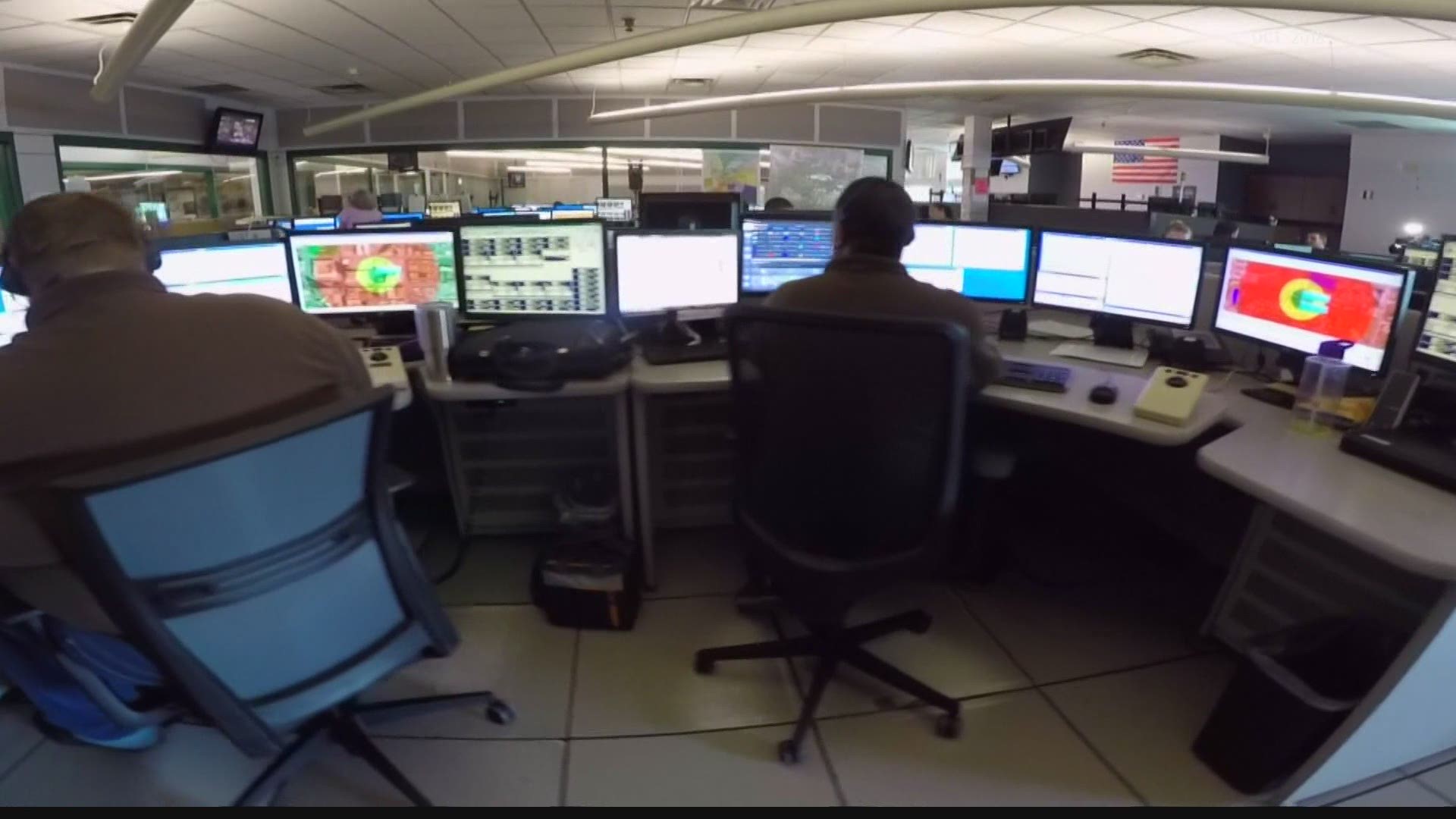 INDIANAPOLIS — Sarah Evans says it was like a bad dream. She was still sleeping on the morning of August 27 when she got a rude awakening.

Her father had just collapsed in his bedroom. Eric Evans has a long history of heart problems and was now unconscious.

“He was laying on the bed and from right here, he has this growling sound and he wasn’t moving,” Evans said, pointing to her throat and imitating the low-pitched gurgling noise she has heard from her father during his previous cardiac emergencies. “I said, ‘That’s it, I'm calling an ambulance!’”

Her 911 call did not go as she expected. Instead of speaking to an emergency dispatcher, Evans found herself listening to a recording.

The next voice Evans heard was another recorded message: “Remain on the line for the next 911 dispatcher.”

“What is going on in your mind as you are sitting on hold?” 13News asked Evans outside the westside Indianapolis home she shares with her parents.

"There's a good chance I could lose my dad,” she responded, shaking her head. “I'm an only child. All I have is my parents.”

While Eric Evans lay unconscious inside his home, call logs show it took 3 minutes and 39 seconds before a dispatcher answered his daughter's call for help. By then, Sarah Evans was both scared and angry. Her frustration is evident during the 911 call recording obtained by 13News.

“Marion County 911. Is anyone experiencing flulike or COVID-19 symptoms?” the dispatcher asked.

“No. My dad is standing here on his death bed because no one wants to answer your damn phone,” Evans responded.

She quickly provided her address and explained her father had collapsed due to a suspected heart problem. The dispatcher then explained the call needed to be transferred to the Indianapolis Fire Department to get an ambulance sent to her home. (IFD dispatchers sit across the hall from their 911 colleagues inside the Marion County emergency call center.)

The transfer was fast. Nonetheless, 4 minutes and 8 seconds had passed before Sarah Evans talked to someone who could dispatch paramedics to help her father, according to call log data obtained by 13 Investigates.

“It felt more like 4 hours,” Evans said. “It’s just not right. This literally could kill somebody.”

Fortunately, the August 27 emergency did not kill Eric Evans. An ambulance dispatched from Wayne Township Fire Station 83 arrived at the Evans home 16 minutes after Sarah initiated her call to 911. Paramedics rushed Eric to a nearby hospital where medical staff discovered he was suffering from atrial fibrillation, a quivering of his heart, which caused a loss of oxygen to his brain and a loss of consciousness.

The irregular heartbeat was not detected by the defibrillator already implanted inside Eric’s chest. If it had been, the device could have used an electrical shock to fix the abnormal rhythm without the need for further medical intervention.

“I'm still here breathing, that's the main thing,” Evans told 13News. The incident has left him worried not only about his heart, but also about the response from the Marion County 911 call center.

“It scares the hell out of me. It really does,” he said.

Of course, calling 911 is not supposed to work that way. Marion County has struggled in recent years to answer emergency calls quickly.

Two years ago, 13 Investigates exposed a serious emergency inside the county's 911 call center. A severe shortage of dispatchers meant callers were waiting as long as 6 minutes to get through to 911. A display monitor inside the emergency call center shows the current wait time at any given moment, and in 2018 it frequently showed callers on hold for 60 seconds or longer.

Following the 13News investigation, city and county leaders responded with a 10% pay raise for dispatchers, and that helped attract dozens of new staff members. Wait times got much better – at least for a while. Coronavirus quickly changed the trend.

MCSO has budgeted for 152 full-time positions but currently has only 126 of those positions filled -- some with part-time staff members. According to a department spokesman, 23 dispatchers have resigned or retired since the start of the pandemic. 28 others have had to quarantine at various times over the past few months – usually for weeks at a time. And unlike workers in many other industries, Marion County emergency call dispatchers who need to quarantine cannot work from home.

“Not when you're a 911 dispatcher,” Williams explained. “Based on the equipment you need to use, the technology is not available right now for any of our dispatchers to work from home.”

Staffing levels have been so low, the 911 call center has mandated many dispatchers work overtime. Supervisors who usually serve in management roles have been answering 911 calls. Staff members willing to work extra overtime shifts have plenty of opportunity to do so. According to Williams, some are working 16-hours shifts four days in a row.

“We're doing everything we can, in our power, to get people in here,” he said.

How many 911 callers are on hold

Credit: WTHR
The Marion County 911 call center saw increased performance after pay increased, but the improvement reverses because of staffing problems caused by the COVID-19 pandemic. This photo is from 2018.

But once COVID-19 hit, the numbers dropped sharply: 80% in April, 75% in May, 64% in June and 67% in July. Overall, call records show just 74% of 911 calls in Marion County were answered within 10 seconds between March and July, with more than 100,000 calls falling outside of the accepted 10-second industry standard.

And it’s important to remember: holding 20 to 25 seconds to reach 911 represents the average wait times. Many callers, like Sarah Evans, have waited much longer. According to monthly call data obtained by 13 Investigates, nearly 29,000 callers trying to reach Marion County 911 since March waited more than 60 seconds to reach a dispatcher.

Williams admits those wait times are not acceptable.

“No, they are not. We want to answer calls as soon as that phone rings,” he told 13News. “We know we are here for one thing, and that is to answer emergency calls and dispatch the police.”

Don’t place all the blame on COVID

Credit: WTHR
Kelvis Williams, commander of the communications department, looks through his office window into the Marion County 911 Dispatch Center.

The sheriff's office now has 15 new dispatchers in training, which is expected to help ease the staffing crisis and prevent wait times from growing further. The hiring comes at a time when finding and training new staff is more challenging than ever.

“It’s been very hard to get people hired because the class sizes for the aptitude test had to be reduced dramatically and the number of trainees had to be reduced to allow for appropriate social distancing inside the center,” explained MCSO Capt. Mitchell Gore. “All of this makes it incredibly challenging to get people in chairs and on the phones to meet the demands of the fifth busiest 911 center in the country.”

Even when those 15 new dispatchers are fully trained and on board later this year, Marion County’s 911 call center will be still be understaffed. The department is still dealing with COVID-related staff shortages and still faces another daunting obstacle when trying to hire and retain dispatchers.

Despite last year's 10% pay raise, Marion County dispatchers continue to earn some of the lowest 911 salaries while handling more emergency calls than anywhere else in the state. To better understand, compare a dispatcher who works in Marion County and one who works in Kendallville:

Kendallville, a small city near Fort Wayne, covers about 6 square miles and has a population of roughly 10,000 residents. Its 911 call center answers an estimated 35,000 emergency calls each year and pays its dispatchers a starting salary of $42,340.

Marion County, including the city of Indianapolis, covers just over 400 square miles and is home to about 965,000 residents. Its emergency call center – one of the busiest in the nation – responded to 950,909 emergency calls last year and offers its starting dispatchers $35,006.

13News has also surveyed 911 call centers in each of the counties surrounding Marion County. The starting salaries offered to nearly all of those neighboring dispatchers is higher – in some cases significantly higher – despite handling far fewer calls.

The lower salary and higher stress level helps explain why hiring new dispatchers in Marion County is hard – and why keeping them is even harder.

“We hire them and train them, and then they go work for other call centers to make more money, and you can’t really blame them,” Williams said. “Making money is what’s what people work for.”

“Don’t want to see someone die”

“I didn't know they paid them that little to do that much work. I don't think that's fair to the operators at all,” Sarah said, after learning of the pay discrepancy from 13News.

But they say those challenges need to be fixed quickly.

“I just hope they get things in order and can start answering the phones quicker for me and a lot of people,” Eric said.

“Yeah, you’re always told to call 911 when you need help,” added Sarah. “But if they’re not going to answer the phone right away – I mean, I could have gotten [my father] to the hospital faster than waiting on them – what’s the point? I just don’t want to see somebody die while waiting.”

A fix might not come right away. The 10% raise that county officials approved in early 2019 is part of a 3-year negotiated union contract for dispatchers that runs through 2021. It includes small pay raises in 2020 and 2021. A new contract to raise salaries again and to bring them more in line with nearby emergency call centers would not be expected until 2022 – unless county leaders and sheriffs administrators step in to address the issue sooner.

The 2019 contract agreement was part of a $1.7 million overall investment in dispatcher pay hikes designed to stabilize staffing and reduce 911 call wait times.

MCSO is looking to hire more dispatchers right now, and qualified candidates who pass their exams are “just about guaranteed a job,” according to Gore.

To apply, you can go the sheriffs office recruitment website.