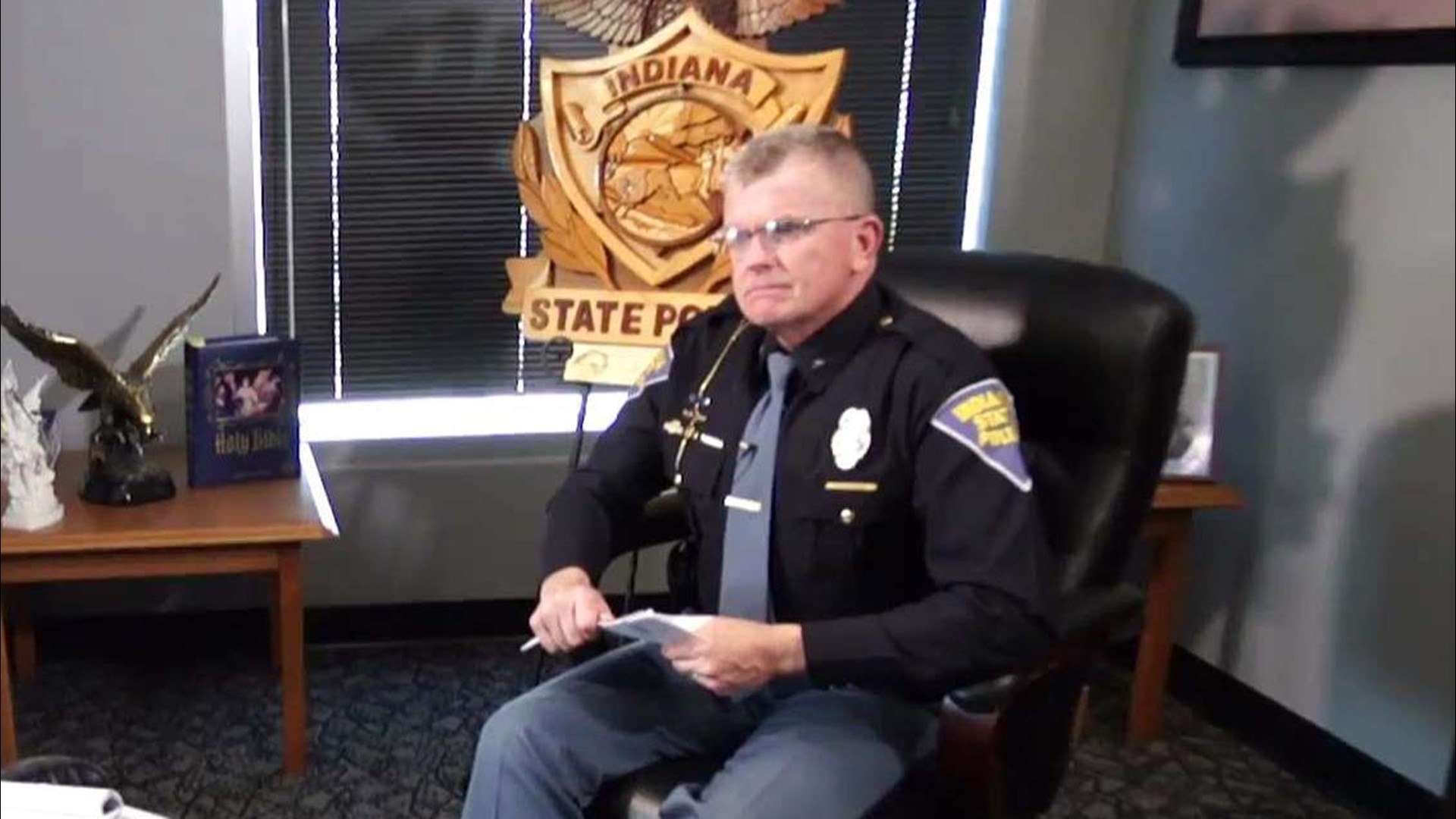 INDIANAPOLIS — If you are among the growing number of Hoosiers now crossing the border to buy marijuana in Illinois or Michigan and you plan to bring it back to Indiana, the man who runs Indiana State Police has a message for you.

“Don't get caught. Don’t. Get. Caught,” said ISP superintendent Doug Carter, slowly repeating himself for emphasis. “That substance in Indiana is still illegal.”

During a recent visit to The ReLEAF Center, a marijuana dispensary that is just eight miles north of the Indiana border in Niles, Mich., WTHR found the majority of cars in the crowded parking lot had Indiana license plates. Most customers waiting in the long line outside the business were Hoosiers who asked not to be identified because they planned to transport their purchases back to Indiana.

“I’m going to use in it the safety of my own home,” said Jeff, a resident of NW Indiana who purchased more than $100 worth of marijuana products.

“Indiana is 100 percent our number one out-of-state customer,” said Summer Ransom, president of Skymint, another marijuana dispensary with multiple locations around Michigan. “They cross the border with it.”

Carter told WTHR he is not surprised to learn more marijuana is now crossing the state border.

“Yes, that was all expected and anticipated as we watched what's happening across the state of Indiana,” he told 13 Investigates. “We’re now pinched between four other states that have legal marijuana.” (It’s actually three. Illinois and Michigan have legalized both medical and recreation marijuana. Ohio allows medical marijuana only, and Kentucky lawmakers are now considering legislation that would do the same.)

But Carter says, so far, his troopers have not seen an increase in arrests or traffic accidents linked to legal marijuana sales in neighboring states.

“The reality is, we haven't seen an uptick, and we were kind of expecting that but we've not seen it,” he explained.

What troopers are targeting

Asked if ISP has added extra patrols along the Michigan and Illinois borders since those states began allowing legal marijuana sales a few months ago, the state police superintendent was emphatic.

He said motorists crossing the border with small amounts of marijuana are not the people his troopers are really looking for.

“A lot of those people, they want to participate in that activity on the weekend, or they want to give it to a family member who might be dying of cancer and allow them to have peace. That's not who I’m worried about. I'm worried about our kids and I'm worried about people who are going to be feeding this poison to communities around Indiana. That's what I'm focused on,” Carter explained.

In other words, Indiana State Police is much more interested in stopping suppliers – the people illegally shipping methamphetamine, heroin, cocaine, Fentanyl and other opioids to Indiana.

That is not to say the superintendent is OK with marijuana. To the contrary, he strongly opposes any efforts to legalize it in Indiana. Carter said state troopers already have a hard enough time dealing with drivers impaired by alcohol.

“I have 35 years in this business and I can go back and remember that smell of alcohol at four in the morning and those two dead bodies inside that car and broken glass and blood,” he said. “Until you've seen that kid bent around that tree because he or she is impaired, I can't expect you to understand why I feel so strongly. The last thing I would ever want to do is put another intoxicant out there to give people a choice to use. Personally and professionally, it's the last thing in the world I'd want to do.”

Carter said he has seen data that shows a significant increase in marijuana-related traffic accidents and deaths in states that have legalized marijuana, along with a host of other societal problems now facing those states.

“Property crime, violent crime, substance abuse, addiction, all of those things,” he said. “We don’t want to be a Denver, Colorado.”

Other studies suggest the number of crashes and deaths in those states spiked only temporarily after legalization, did not increase at all, or were consistent with a trend of increased crashes and deaths that is unlikely related to marijuana.

What about medical marijuana?

The superintendent is aware of growing support in Indiana for legalizing medical marijuana. A statewide survey by Ball State University showed more than 80 percent of Hoosiers questioned in 2018 approve of medical marijuana. Carter told WTHR he sympathizes with Hoosiers who want to use marijuana to ease chronic pain caused by disease, but he said his agency still must follow current law.

“It's illegal in Indiana until the Indiana legislature says it's not.”

“Just because I'm the superintendent doesn't give me the authority to decide which laws we will and won't enforce. It's illegal in Indiana until the Indiana legislature says it's not,” he said.

That means crossing the border with products that were purchased legally a few miles away can bring stiff penalties.

Illinois allows its residents to legally possess about 30 grams of marijuana. Michigan permits possession of 2.5 ounces (about 70 grams). A Hoosier who buys those legal amounts and brings them back to Indiana can be charged with a misdemeanor that brings up to six months in jail and a $1,000 fine. Getting caught with 30 grams of marijuana a second time is a felony, punishable by up to 30 months in prison and a $10,000 fine.

Many Indiana state lawmakers want to change that. But for each of the past ten years, their legislation to decriminalize possession of small quantities of marijuana has been ignored or stalled in the General Assembly.

Several lawmakers, both Democrats and Republicans, plan to re-introduce legislation in 2021 that would legalize medical cannabis and prevent Hoosiers from being sent to prison for possessing small amounts of marijuana.

In the meantime, Carter said he has sent no special directive to state troopers when it comes to marijuana enforcement.

“I haven’t and I won’t,” he said. “They do have pretty wide discretion, but until the law changes, I’ve given them no direction other than follow the law. Anything different, it would be wrong of me to do that.”