A raid at an Indianapolis grocery store has sent shockwaves throughout the state, as Hoosiers suffering from pain, anxiety and other medical conditions try to understand why Indiana is cracking down on a dietary supplement that is considered legal elsewhere. 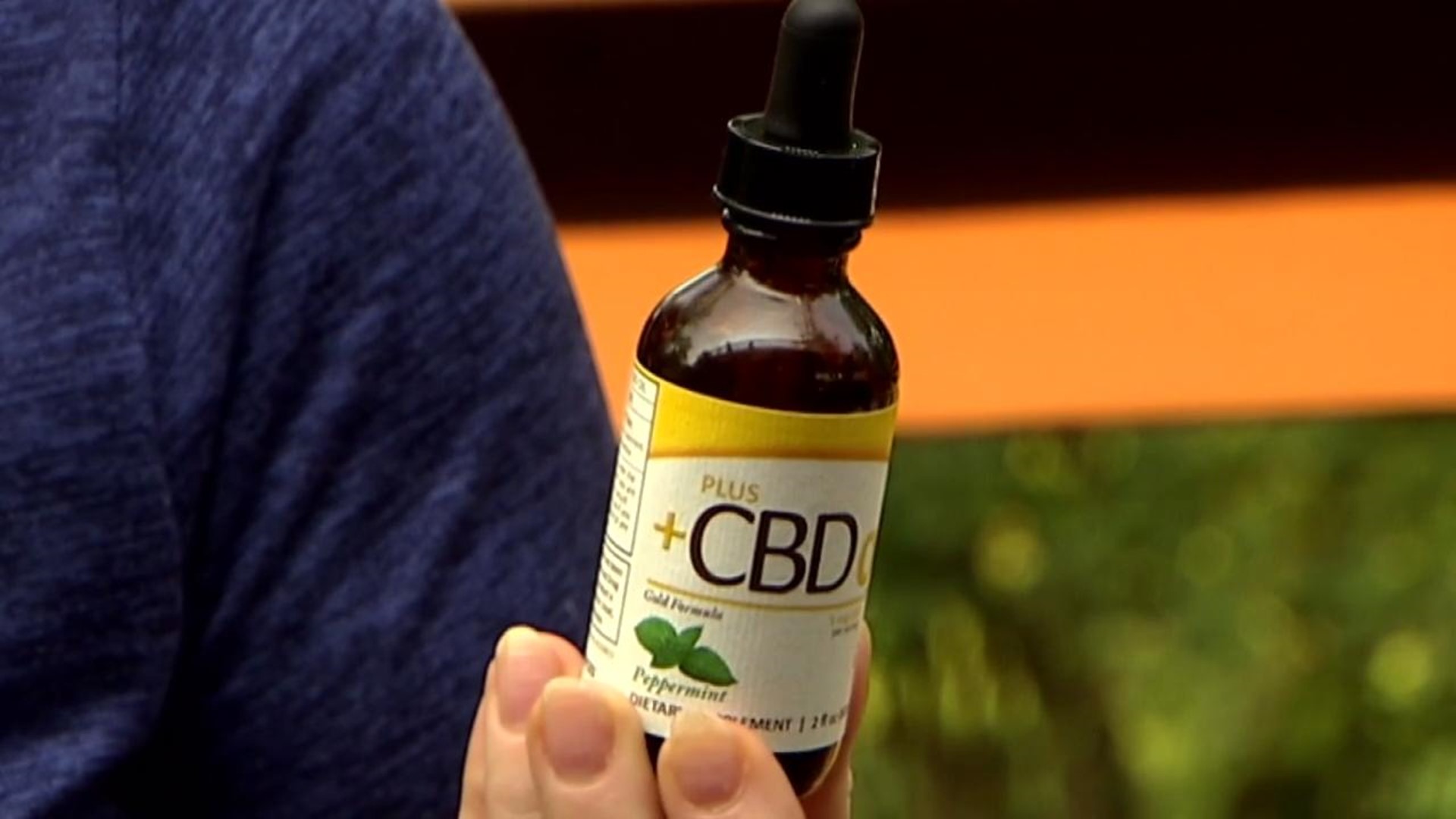 INDIANAPOLIS (WTHR) - A raid at an Indianapolis grocery store has sent shockwaves throughout the state, as Hoosiers suffering from pain, anxiety and other medical conditions try to understand why Indiana is cracking down on a dietary supplement that is considered legal elsewhere.

It has triggered a legal debate between law enforcement agencies, Indiana’s agricultural and business communities, and families trying to deal with debilitating pain.

“It gave me my life back”

Edie Caito of Center Grove was diagnosed ten years ago with fibromyalgia, a disorder that causes excruciating muscle pain throughout her body.

“Every muscle in my body just screams. You can’t move. You can’t get out of bed. It got so bad, I was suicidal,” Caito told WTHR. Doctors prescribed her powerful painkillers, but they did little to improve her quality of life.

When Caito learned about CBD oil, she was desperate to find an alternative to her addictive prescription medications which all seemed to trigger a wide variety of side effects.

“As soon as I read the literature, I took home my first bottle of CBD oil, and within five days it was like this veil had been lifted,” she said. “I had energy. My pain level was low. It was like, ‘Wow.’ I feel like me for the first time in years. It gave me my life back.”

Her daughter, Michaela, who also suffers from fibromyalgia, anxiety and depression, said CBD oil helped her, too.

“I feel better than I’ve felt in years, and no side effects at all,” Michaela said. “It’s just amazing.”

Angela Hopkins had a similar experience.

Last month, she fell while walking in the woods and broke her left ankle in three places.

“My foot was pointing in the wrong direction and the pain was just unbelievable, so I knew it was really bad,” Hopkins told 13 Investigates, recounting the accident that sent her to the hospital. “They gave me multiple doses of Fentanyl and Dilaudid, which is the strongest thing they can give you, and every 25 minutes I was begging for more.”

The longtime nurse did not want to get addicted to opioid pain medications, so when a friend suggested CBD oil to help alleviate her pain, Hopkins was open to the idea.

“I had heard of it. I had read about it. But everything you read isn’t always true, so I was still kind of skeptical,” she said.

That skepticism didn’t last long. She soon discovered a few drops of CBD oil liquid placed under her tongue each day allowed her to wean off her prescription painkillers: from four pills daily down to just one.

“I think it really helps a lot. I really do,” Hopkins said.

So what is CBD? The initials are short for cannabidiol oil. The compound comes from cannabis plants, better known as the source of hemp and marijuana. CBD has gained popularity among people suffering with arthritis, chronic pain and epilepsy because of its ability to reduce pain without the significant side effects and addiction commonly seen with prescription opioids.

While marijuana has high levels of THC, a psychoactive compound that gives users a high, most CBD comes from industrial hemp and contains only miniscule amounts of THC. Marijuana is illegal in Indiana, but state law clearly defines industrial hemp products that contain less than 0.3% THC as not falling under the same category or definition as marijuana. Shunned for decades due to fears, stigma and confusion about the different types of cannabis, industrial hemp is now legal in all 50 states.

“Hemp CBD is completely different from medical marijuana CBD,” explained Rick Monteith, owner of Georgetown Market Natural Foods on the northwest side of Indianapolis. “One is legal. One is not legal. We’re only selling the legal CBD and there’s a big difference – especially from a legal standpoint.”

The products are available in balms, sprays, liquid drops, and capsules.

“You don’t get a high from CBD,” explained Edie Caito. “You don’t get dizzy or nauseous. This is not marijuana. That’s why it’s legal.”

Like Caito, thousands of other Hoosiers were also under the impression that CBD oil is legal in Indiana. Thanks to word of mouth and positive testimonials, the product was becoming a hot seller in health food stores across the state. The sales came to a sudden stop six weeks ago, when Indiana Excise Police raided Fresh Thyme.

Executives at Fresh Thyme headquarters in suburban Chicago did not return WTHR’s phone calls to discuss the June raid, but employees at the south-side grocery store said the crackdown came as a shock.

“We can't sell it anymore. They took it all away,” said a Fresh Thyme worker, who is not being identified because the employee is not authorized to speak on behalf of the company. Asked why state investigators confiscated the CBD oil, she shrugged her shoulders. “Talk to the state of Indiana. I don’t know. It's not like marijuana or anything like that, but they determined it was not -- by law -- they couldn't sell it, so we had to take it off the shelves. It’s ridiculous. So many people were benefiting from it.”

Another employee showed 13 Investigates a counter in the store’s nutritional supplements section that used to be the site of a large, locked display case filled with CBD oil products. A printer and office supplies are now sitting in the same spot. “They haven’t told us when we’ll get them back or when we can start selling them again. A lot of people are asking, and we just tell them to keep calling the store for updates.”

The Indiana Alcohol and Tobacco Commission confirmed for WTHR that it confiscated CBD oil products from Fresh Thyme as part of its routine enforcement activities.

“We enforce illegal possession and sale of CBD oil in Tobacco and Alcoholic Beverage licensed establishments,” an ATC spokeswoman wrote in response to WTHR’s questions. “CBD oil is not legal to sell or possess in Indiana… The businesses found in possession are cited administratively under their alcohol or tobacco sales certificate for the preliminary charges of possession of marijuana and possession of [a] counterfeit controlled substance.” Even though the raid took place six weeks ago, a prosecutor has not yet reviewed the citation against Fresh Thyme, according to the Indiana State Excise Police.

News of the bust came as a surprise to customers.

Recovering from her ankle surgery and running low on CBD oil, Hopkins learned about the raid when her husband went to Fresh Thyme to get her more.

“He said there was nothing. None at all. Shelves were completely empty,” Hopkins told WTHR.

“Gone. Out of every one of the stores,” recalled Edie Caito, who also got her CBD from Fresh Thyme. “I was completely freaking out.”

The raid also came as surprise to other grocers around the state. After hearing about the crackdown, many stopped selling CBD products to their customers.

“That obviously got our attention,” said Montieth, showing 13 Investigates a small room near the back of his store where he is now storing CBD oil that has been pulled off Georgetown Market shelves. He disagrees with the ATC’s decision to confiscate CBD oil from retailers.

“Until this is resolved, it’s best for us to just support the legal system and do what’s best so we don’t get in trouble,” Montieth told WTHR. “I do think the state and the governor’s office need to understand the difference between medical marijuana CBD and industrial hemp CBD. I think it’s definitely a misunderstanding.”

The misunderstanding comes just a few months after Indiana Governor Eric Holcomb signed a bill creating a CBD registry for epilepsy patients, making the product legal for Hoosiers suffering from treatment-resistant epileptic seizures. According to the ATC, the new law “only allows certain people to lawfully possess CBD oil.” But Indiana retailers sold CBD oil products prior to the April bill signing with few interventions by the state.

The raids also seem to contradict the governor's pledge to fight widespread opioid addiction that has gripped families across Indiana. As part of a wide-ranging effort to curb drug abuse and addiction, Gov. Holcomb has indicated a willingness to find creative solutions to battle the state’s growing drug problem.

Halting access to an over-the-counter supplement that offers hope and relief to many Hoosiers dealing with addiction to pain pills is a move in the wrong direction, according to those who rely on CBD oil.

“When I ran out and couldn’t get more for several days, my pain went up tremendously,” said Hopkins. “I was down to one [opioid] pill a day, and I went back up to four a day because I just couldn’t stand it.”

Supporters of CBD oil say they have contacted the governor’s office for answers.

“I called and said, ‘Why has this been taken off the shelves?’ but they never called me back,” Edie Caito told 13 Investigates.

WTHR contacted the governor’s office, as well. The governor’s spokeswoman, Stephanie Wilson, has not yet responded with answers to any of WTHR’s questions.

The office of Indiana’s Attorney General told Eyewitness News it was not aware of last month’s CBD raid. It is now further investigating the issue to provide perspective on the legality of CBD oil in Indiana.

Informed of the Indiana ATC statement that CBD oil is illegal, one of the nation’s leading CDB manufacturers said the position is misguided.

“I disagree with any interpretation of the law when talking about CBD or any product that is derived from agricultural hemp because it almost always is just a case of lack of education on the subject,” said Josh Hendrix, a hemp farmer who is also a spokesman for CBD oil producer CV Sciences.” I believe these agencies are limiting the market potential of this alternative crop and inhibiting the rebirth of an industry here in America simply because they aren't educated on the differences between hemp and marijuana, but we are working hard to make sure that everyone understands the difference as well as the benefits of the many products that hemp can create.”

Major Dwight Frost, who leads the Drug Task Force in Hamilton and Boone counties, tells WTHR Indiana state code specifies that industrial hemp is not illegal, so if CBD oil is made from hemp, the product is not illegal, either. “It has a very low level of THC,” Frost explained, offering a very different legal interpretation than the Indiana ATC.

While the debate plays out in Indiana, Hoosiers families like the Hopkins Caitos are ordering CBD oil over the internet. They say that’s more expensive than buying locally, and Indiana retailers say they are losing out on local sales revenue.

“I don't understand why they’re doing this,” Hopkins said. “So many people are benefiting from CBD oil. It just doesn’t make sense.”