Bobby Musgrove says in total, the IRS now owes him more than $10,000 because of the mix-up. 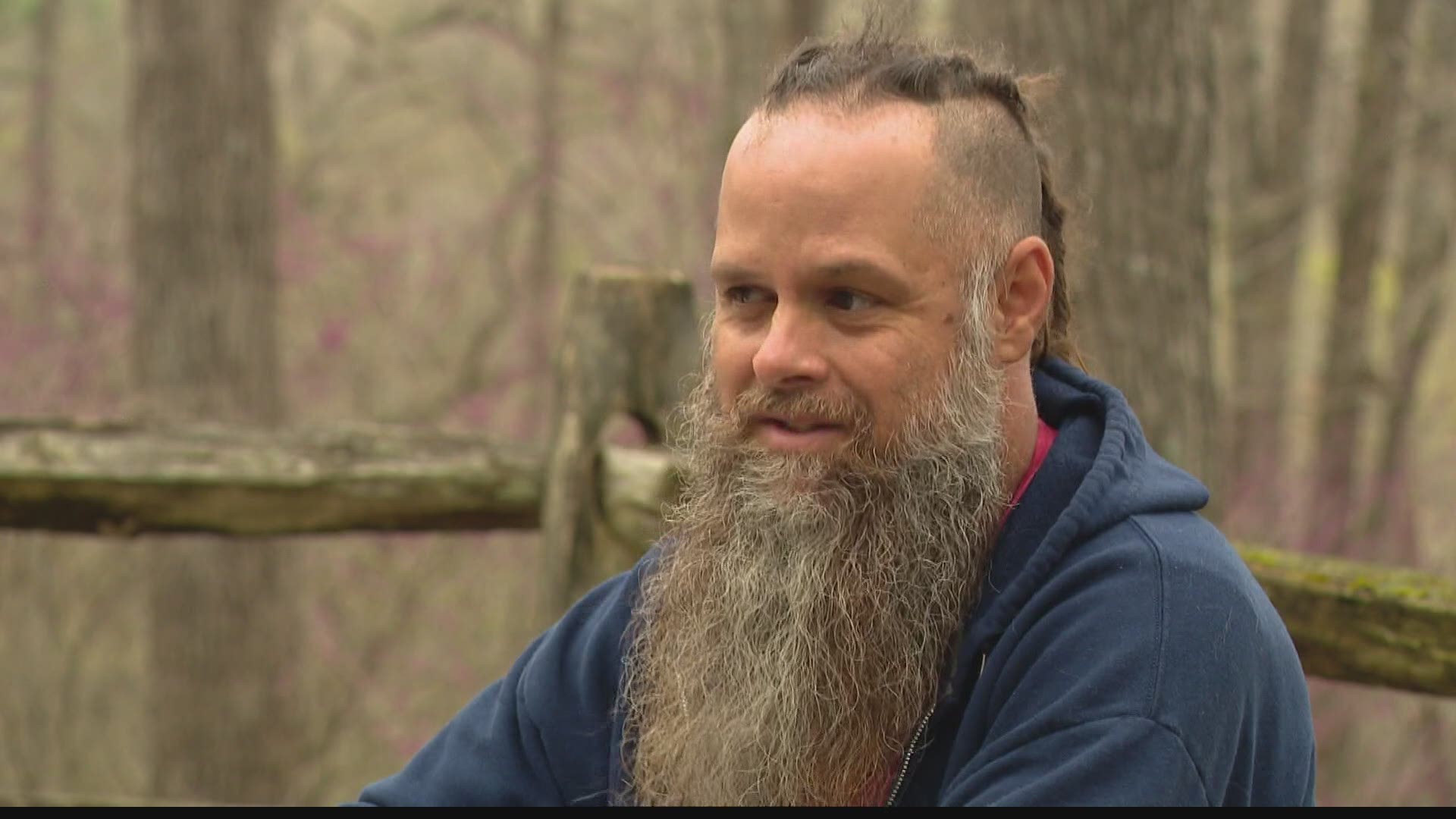 BROWN COUNTY, Ind. — Bobby Musgrove is in training. This summer, he hopes to become one of the first dialysis patients to hike all 2,100 miles of the Appalachian Trail. For a guy with serious kidney disease, Bobby is in really good shape.

But don't try telling that to the IRS.

"Deceased" is the designation the IRS currently has on file for Bobby Musgrove. After just a few minutes talking with Bobby and observing him closely, it's pretty clear the IRS got this one wrong.

Bobby has a good sense of humor, but being killed by the IRS is a serious problem that's strained his patience. Because the IRS thinks he's dead, Bobby never got his first stimulus check. Or the second. Or the third. He says the IRS also owes him several years of tax refunds.

The Columbus, Indiana resident says in total, the IRS now owes him more than $10,000 because of the mix-up.

"That's a lot of income that I really need," he explained. "I'm begging to be alive in the system and can't do it."

The problem started with a confusing letter from the Social Security Administration offering condolences about Bobby’s death. He immediately contacted his local Social Security office to alert the agency of the error.

Credit: WTHR
The problem started with a confusing letter from the Social Security Administration offering condolences about Bobby Musgrove’s death.

A month later, Social Security sent an apology, admitting it made a mistake. But the damage was done. Social Security had already included Bobby's demise in its Death Master File, which is shared with the Internal Revenue Service. And once the IRS thinks you're dead, you're essentially dead.

"It's difficult to unwind the information once it's in the IRS' system that someone is dead," said Leslie Book, a Villanova University law professor who also sits on the board of the Center for Taxpayer Rights. "Whatever the source of the problem is, you'd think it would be easier to fix. That it's persisted this long is troubling."

The problem has persisted for two years, despite Bobby's repeated requests to the IRS to revive him in the agency's records. He even visited the IRS office in the downtown Indianapolis federal building so he could meet face-to-face with IRS staff. Bobby says he took his birth certificate, state identification and previous tax returns with him to the meeting. That still wasn't enough to get the problem resolved.

Other dead taxpayers are angry too

While it is unclear just how prevalent this problem is within the IRS, 13 Investigates has determined Bobby is far from alone.

Earlier this year, two Kansas residents reported they could not access stimulus checks or file tax returns because they are also considered dead by the IRS.

Veteran Franklin Jackson said the IRS owed him more than $4,000 because an agency representative told him "somebody hit the wrong key," triggering a two-year battle as Jackson tried to convince the IRS that he is not actually dead. "It's hard to speak to a real, live human being," the 52-year-old told NBC affiliate KSNT. And after that news report, Kansas resident Tyson Vrbas contacted the TV station to say the same thing has been happening to him.

Shakira Evans also battled the IRS for years, trying to collect her tax refunds after the IRS classified her as deceased.

"Every time I contact the IRS, they tell me to wait. Wait for what? How long will it take to go into their system and change a simple error?" she asked during a 2019 interview with the PhillyVoice. "My children and I are suffering at the hands of the IRS. Someone just needs to do their job and fix this! How much more do they need?"

Credit: PhillyVoice
Shakira Evans also battled the IRS for years, trying to collect her tax refunds after the IRS classified her as deceased.

Pat Lowman can relate to those stories. The retired English teacher from central Pennsylvania was declared dead by the IRS, and she thought she had the problem resolved in 2019. But last year when she tried to file her tax return, the IRS notified her that it had placed a lock on her Social Security number because "IRS records show that it belongs to a deceased person."

"I've been very frustrated, annoyed, angry," Lowman told The (Allentown) Morning Call. "I feel like I've done all that I could possibly do."

Taxpayers in Tennessee, New York, Utah and other states have reported the same thing happening to them, too. They were all left for dead by the IRS, even after trying to prove they're very much alive .

"We shouldn't have to deal with a system that requires over two years to prove that you're alive. That's frankly just unacceptable," Book told 13News. The law professor said the IRS has struggled for years to provide adequate customer service—and the COVID-19 pandemic has made things even worse.

"Even before the pandemic, the IRS had a challenge in successfully communicating with taxpayers. So you have a perfect storm of circumstances coming together now where the IRS is really having a hard time meeting basic standards of service. We deserve better as a society and as citizens from our government."

13 Investigates contacted the IRS to ask questions about the delay in resolving Bobby's case. Agency spokesman Luis Garcia responded "…federal law and IRS disclosure regulations do not allow me to comment on the status of any tax matter of a taxpayer." He did, however, ask for Bobby's contact information and offered to help find a solution as quickly as possible.

Credit: WTHR
IRS spokesman Luis Garcia responded to 13News about Bobby Musgrove's case saying “…federal law and IRS disclosure regulations do not allow me to comment on the status of any tax matter of a taxpayer.”

Two weeks later, Bobby said he is still considered dead with the IRS, and no one from the agency has even reached out to contact him.

"I'm not totally shocked that it would be hard for people to un-do this designation, but I would think the IRS would have to have a way to fix it," said Keith Fogg, who directs the Harvard Law School tax clinic. He echoed concerns that COVID-19 has seriously reduced the IRS' ability to assist taxpayers who need help. "The pandemic really set the IRS back and they're struggling right now. I'm regularly trying to get information about my clients from the IRS, and I used to be able to do it in a few days. Now it takes a few months."

Fogg said taxpayers who cannot resolve their ongoing issues with the IRS can file legal action in an attempt to force the agency to take action and pay money that is owed. But he advised frustrated taxpayers to first contact the IRS Taxpayer Advocate for help. The Taxpayer Advocate is an independent agency within the IRS charged with advocating for and assisting taxpayers with complex matters that they cannot otherwise get resolved with the IRS.

"That's the part of the IRS designed to fix these kinds of problems. That's where I'd suggest people go," he said, acknowledging the Taxpayer Advocate has also been impacted by the pandemic.