Bob and Julia Taylor bought an inflatable pool to help cool off during the pandemic. But that pool got them in hot water with their homeowners' association. 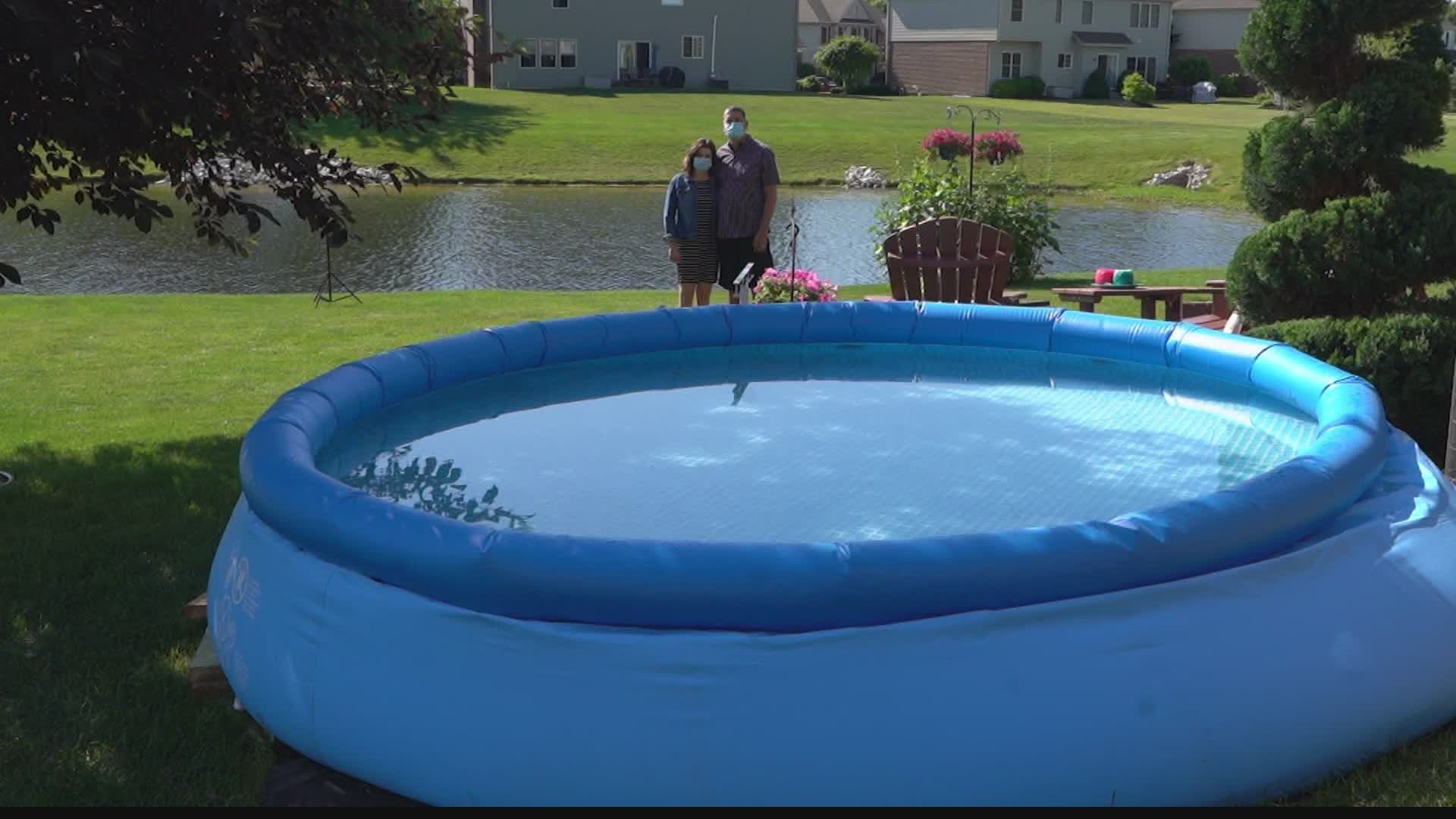 FISHERS, Ind. — It's only 12 feet across and just a couple of feet deep, but a wade pool in Fishers is causing some big waves.

“I think it’s insane,” said Bob Taylor. “And what’s so interesting is this really all started about safety.”

Taylor and his wife, Julia, purchased the pool this spring for their 12-year-old daughter. The family has a neighborhood pool they can use in their Oak Hall subdivision, but because Julia has a severe autoimmune disorder, using the community pool during the COVID-19 pandemic feels too scary.

“We’re simply not able to use the neighborhood pool,” Julia told 13News. “So we got this wading pool for my daughter just to have some fun. That’s it. We wanted to do something that’s allowed and within guidelines.”

But the Oak Hall homeowners association says the Taylors' pool does not meet guidelines, and the family has since been put on notice.

“We got a letter probably the day after we set it up from the homeowners' association, basically telling us we were out of compliance with the covenants and we needed to take it down,” Bob said, providing 13News with a copy of the letter he received from Kirkpatrick Management, the management company for the Oak Hall homeowners association.

That letter cited Article 10, Section 6 of the neighborhood covenants, which state “No above-ground swimming pools shall be permitted.”

Less than a week later, the family started getting letters from an attorney hired by the HOA. Those letters, which included photographs of the controversial wade pool, stated the Taylors would eventually be responsible for paying the association’s legal fees and court costs if they didn't remove their pool. “Your above-ground pool depicted in the enclosed photograph clearly violates Article X, Section 6 of the declaration,” wrote attorney Stephen Donham.

But the HOA, its management company and attorney all failed to mention important language within the HOA rules. The Taylors say that language shows they are being needlessly harassed by the HOA for a type of pool that neighborhood regulations have permitted for years.

More than a decade ago, the Oak Hall homeowners association approved Architectural and Landscape Design Standards that address small pools in the Fishers subdivision. The document states “portable or inflatable wading pools without filters, up to two feet in height, and located in back yards” do not require approval from the HOA.

Credit: WTHR
Bob and Julia Taylor and their backyard pool

“Those guidelines are incorporated into the covenants, so in effect, they are part of the covenants,” said Peter Kovacs, a Fishers attorney whose practice includes HOA legal disputes. He reviewed the Oak Hall legal documents at the request of 13News. “The covenants treat swimming pools and wading pools as two different things, and it is clear that swimming pools have to go through an approval process. Wading pools do not.”

The Taylors say the difference is important, and one they considered when deciding what pool to purchase this spring.

“We’re only going to have it this year and it’s really just to keep everybody safe,” Julia explained. “It’s in compliance. We’re rule followers…and I just want to be allowed to continue to follow the rules by having a pool and let my daughter swim and play.”

After receiving complaint from the HOA management company ordering them to remove the wade pool, Bob said he took careful measurements of the pool to show it met all neighborhood requirements. He sent those photos to the management company and HOA attorney. They show the pool is less than two feet tall, has no filter and is placed in the backyard. 13 Investigates also measured the pool on all sides, and each of the measurements was between 22 and 24 inches.

“You can see it's a good inch, inch-and-a-half, below the 2-foot mark, so we're totally in compliance with this pool,” Bob said.

He also invited the town of Fishers to inspect the pool, and Fishers permit manager Tammy Green supported the Taylors’ conclusions. Her inspection determined the pool is less than two feet high and meets the other conditions of the Oak Hall covenants. Green’s inspection also casts doubt about the HOA’s argument that the structure is considered an above-ground swimming pool – rather than a more loosely regulated wade pool – under Indiana law.

The HOA’s management company and attorney extended the Taylors’ compliance deadline to June 15, but they have not rescinded their order to remove the pool -- despite the family providing photos and copies of HOA documents that appear to allow pools like the one now sitting in the Taylors’ backyard.

“At this point, we really feel like we're being bullied,” Bob told 13News.

“It's been such a heavy-handed, strong reaction for something that's allowed,” echoed Julia.

Kirkpatrick Management has requested that the family either provide the model and specifications of the pool or allow a representative of the HOA to inspect it up close.

The Taylors initially refused that request, frustrated with the HOA’s aggressive legal tactics and fearing the HOA was being unreasonable in its enforcement. They have since agreed to allow an HOA representative to inspect their pool, as long as that person is escorted on the property and agrees to wear a face mask and other protective equipment to help reduce any risk of the family contracting COVID-19.

Credit: WTHR
Oak Hall has a community pool for residents of the neighborhood, but it poses a COVID-19 risk for Julia, who has a severe autoimmune disorder.

Contacted by 13 Investigates last Friday, Kirkpatrick Management said Oak Hall community association manager Brian Kavanaugh was not available to speak with 13News. Dan Quigley, the company’s vice president of associations, said he believed the complaint against the Taylors might be dropped as soon as a HOA representative had a chance to confirm the pool was less than two feet tall.

“Yeah, I think at that point they’d walk away, but we just need to verify that,” Quigley said. He referred further comment to Stephen Donham, the attorney hired to represent the Oak Hall HOA, but Donham has not returned multiple phone calls from 13News.

Monday morning, 13 Investigates spoke with Oak Hall HOA president Ken Juskow. He said Donham had advised him not to speak about the case and instead “to let the lawyers handle it.”

But Juskow did provide 13News with additional information about the complaint involving the Taylors' wade pool, including that the initial complaint originated from an Oak Hall resident before being forwarded to the management company and attorney. He also said another family in the neighborhood recently received a similar complaint for having the identical wade pool in their backyard.

“We never said they can’t have a pool. It just needs to meet the specs,” Juskow told 13News, adding that the real concern is whether the pools in question can be inflated to a height greater than two feet. “We believe it’s a 30-inch pool. If you have a 30-inch pool and have it inflated to be a 23-inch pool, technically that wouldn’t fit [the covenants]. That’s the thing that’s in question. We’re not going to be out there every day to measure it to see if it stays 2-feet high.”

Kovacs, the attorney who reviewed the Oak Hall covenants for 13News, said he believes the HOA’s argument is not supported by the law.

“The potential of it to be in non-compliance, I don’t think that’s something that holds water, so long as the homeowner is adhering to the rules as they are written,” he said. “Those covenants specify no more than 24 inches for a reason, and they homeowner has complied with that. So visually, it doesn’t make a difference if the pool could be expanded to 30 inches. Right now, it’s compliant and it’s adhering within the standards the covenants specify.”

The attorney said “how the pool is being used” is the legal standard that should apply in disputes like the one taking place Oak Hall.

“Just by way of example, let’s say hypothetically there was a restriction on flag poles that they cannot be higher than 14 feet. If someone installed a pole that was 14 feet and the objection was it could be extended to 16 feet and, therefore, it’s not in compliance, I would not agree with that argument. It’s how the flag pole is being used and whether it’s within compliance, not whether it could be non-compliant at a later time.”

Kovacs also expressed surprise that a homeowners association would so aggressively pursue legal threats over a backyard wade pool during a pandemic.

“There is a health and safety dimension to this issue, and I think all things considered, the homeowner is being reasonable,” he said.

The Taylors say they hope the HOA will stop sending them legal notices, dismiss the case and allow them to keep their wade pool through the summer.

“I’m not even sure what lessons we can take away from this. We just want my daughter to have a small wade pool in our backyard until all this passes,” Julia said.

13News will report on the Fishers HOA dispute as new developments become available.

The Homeowners Protection Bureau has resources and tips for families dealing with disputes involving their HOAs.