Feds investigating popular SUV for unexpectedly braking by itself

Braking complaints collected by NHTSA over the past 18 months all seem to describe the same phenomenon with drivers reporting their Nissan Rogue “brakes suddenly without warning,” “slammed on its brakes by itself,” and “came to a sudden and extreme stop” for “no apparent reason.” 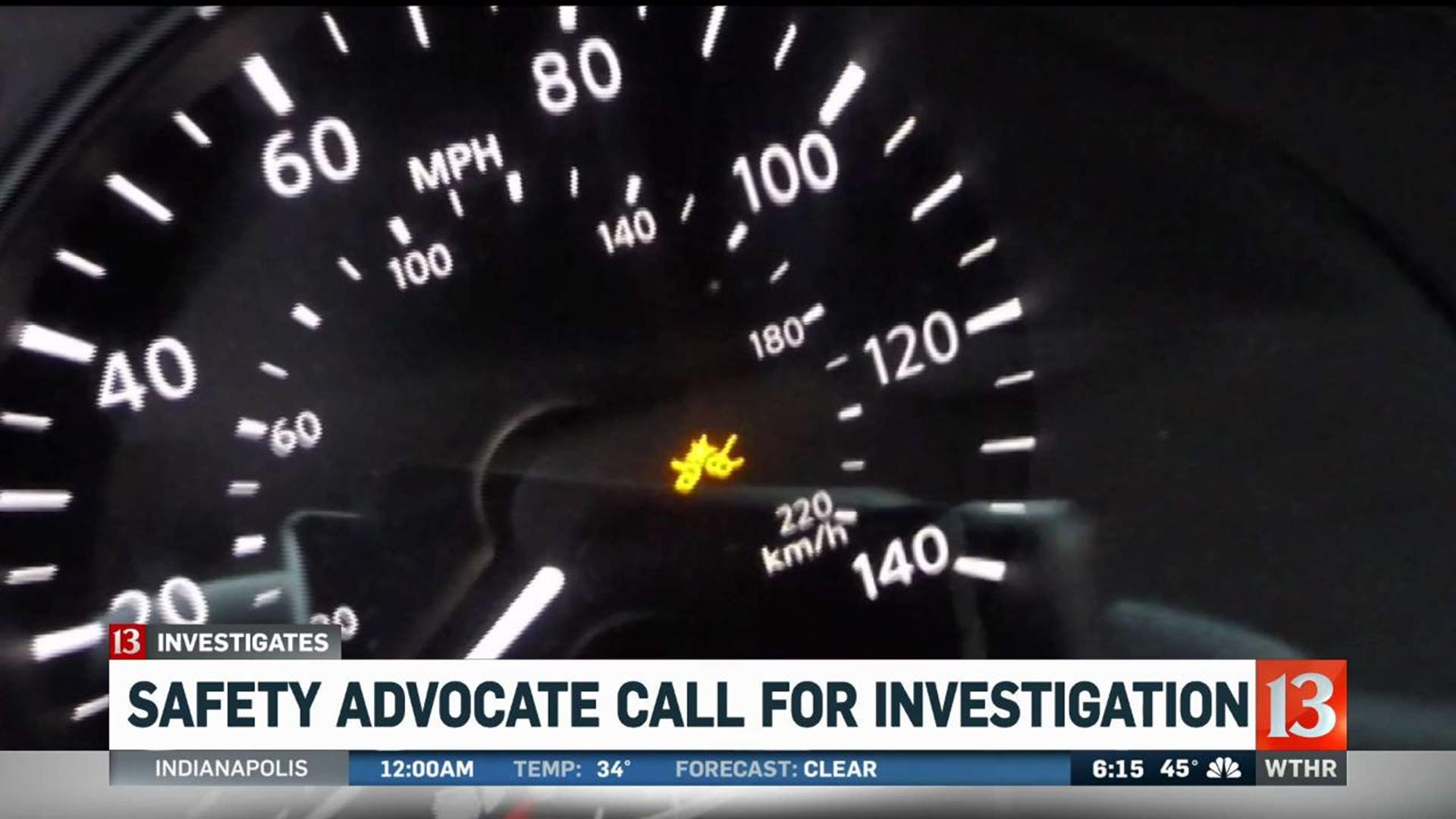 BROWNSBURG, Ind. (WTHR) — Cassandra Brown's Nissan Rogue still has that new car smell, but her new car excitement wore off months ago. In fact, she doesn’t want to drive it at all.

“I'm nervous every time I turn this car on,” Brown said. “I’m driving it because it’s the only transportation I’ve got, but I don’t feel safe in it at all.”

Brown first noticed a problem in May, less than two weeks after she drove the new vehicle home. At the time, she was driving north on Interstate 65 for a business trip to northwest Indiana.

“I'm nervous every time I turn this car on.”

“All of a sudden it was like a stop … a hard stop and then it was just stalled, like it wasn't going to move,” Brown recalled. “Things were flashing. A ‘warning malfunction’ and this little crash symbol. And all this time I’m on the highway, and I have to like struggle to get it to the side of the road. My heart was beating so fast, and I just didn’t know what happened.”

Brown told WTHR the same frightening experience – sudden, unexpected braking accompanied by a malfunction warning light on her dashboard – has happened at least three other times while driving her 2019 Nissan Rogue. She said it's an accident just waiting to happen -- especially while traveling at highway speeds.

“I was driving like 65 [miles per hour] and it just comes to a stop. Thank goodness nothing was around me. If there had been a big semi truck there, I would not be here,” she said.

Brown’s story is shared by other Rogue owners who've filed hundreds of complaints with Nissan and the National Highway Traffic Safety Administration (NHTSA) involving one of the top-selling sport utility vehicles in the country. 13 Investigates has learned those complaints prompted a flurry of activity, with government regulators launching a formal safety investigation and Nissan conducting a “service campaign” in an attempt to fix the problem. At the same time, safety advocates and frustrated consumers criticized the automaker for not issuing a full recall to warn and protect more than a million Rogue owners who could be impacted by the problem.

At the center of that problem is technology designed to prevent crashes that might instead be causing them.

Braking complaints collected by NHTSA over the past 18 months all seem to describe the same phenomenon with drivers reporting their Nissan Rogue “brakes suddenly without warning,” “slammed on its brakes by itself,” and “came to a sudden and extreme stop” for “no apparent reason.” Those complaints reported, at times, the sudden braking occurred at low speeds in parking garages and driveways, while in other situations it happened at higher speeds on highways.

Other concerned Rogue owners told government regulators the sudden braking is often accompanied by jerking, shaking and an “awful grinding noise” that left them "totally freaked out."

After experiencing the problem, the owner of a Nissan Rogue in Michigan informed NHTSA “this is a serious problem with the potential to cause serious injury and or kill people.”

And an anxious New York driver wrote, “I refuse to have a car and play Russian Roulette with mine and my families [sic] lives … I am extremely scared to go on a highway.”

Brown understands each of those comments.

“That's what I feel like when I start that car up every day,” she told WTHR. “I’m just waiting for it to happen again and I’m bracing myself for that sudden impact.”

What began as a few dozen reports of unexpected braking has now grown to at least 893 complaints, including 14 crashes and five injuries linked to the Rogue braking malfunction, according to government documents and a Failure Report Summary filed by NHTSA’s Office of Defects Investigation.

Nissan said its AEB system uses radar to track the vehicle directly in front of you. The system is designed to trigger audible and visual warnings if it determines a risk of colliding with that vehicle. If the driver does not respond to those alerts by decelerating and the risk of collision increases, Nissan said the AEB system will apply automatic emergency braking immediately before the collision to avoid or reduce the damage.

But some Rogue owners now claim the system meant to avoid front-end collisions is putting them at an increased risk of rear-end crashes because it has been activating even when no other vehicles are in front of them. NHTSA describes the problem as “unintended braking due to the Automatic Emergency Braking (AEB) system engaging with no apparent obstruction in the path of the vehicle.”

“We started seeing people saying it was braking for no apparent reason, and that’s really scary and potentially very dangerous,” said Center for Automotive Safety executive director Jason Levine. “We told them this needs to be investigated and there probably needs to be a recall here because this vehicle is braking when it shouldn't be.”

“It begs the question: ‘When did Nissan know it had the problem and how long were they going to wait before announcing it had a proposed solution?’” Levine told WTHR.

Internal Nissan documents obtained by 13 Investigates show the automaker was aware of the braking problems by spring 2018. That is when Nissan published the first of several Technical Service Bulletins involving unexpected operation of Automatic Emergency Braking, Forward Emergency Braking and Forward Collision Warning systems in 2018 models of its Rogue, Rogue Sport and Rogue Hybrid. A 26-page bulletin issued in June 2018 explains how qualified mechanics can reprogram the vehicles’ radar to correct AEB malfunctions.

A few months later, Nissan sent a “quality action” campaign notification to its dealerships, instructing them to reprogram both the radar and the Advanced Drive Assist System (ADAS) software on certain 2018 model year Rogue and Rogue Sport vehicles.

According to a bulletin sent to Nissan service and parts department managers in March 2019, the automaker said it had already mailed a letter to 2017 and 2018 Rogue owners making them aware of a “customer service initiative to increase awareness of an available update for the Automatic Emergency Braking (AEB) system.” The bulletin cited rare instances in which “unique roadway environments such as certain types of railroad crossings and metal overpasses could activate braking when not needed.” It also said drivers who experience unexpected activation of the emergency braking system can override the AEB system by pressing the accelerator.

A Nissan North America spokeswoman sent WTHR the following statement in response to our questions:

Nissan is committed to the safety and security of our customers and their passengers. Nissan has investigated the issue of false-positive activation extensively and, in consultation with NHTSA, launched field actions notifying affected customers of a software update that improves MY17-18 Rogue AEB/FEB system performance. Customers are invited to bring their vehicle to an authorized Nissan dealership where the update will be applied at no cost to the customer. As always, Nissan will continue to work collaboratively with NHTSA on all matters of product safety.

WTHR contacted several Nissan dealerships in Indiana to get more information about the AEB software update. Their service departments were all aware of automatic emergency braking problems involving Nissan Rogues and said the update takes between 45 and 90 minutes to perform. Several service department employees referred to the updates as a recall, even though Nissan has been very clear it has not issued a recall related to AEB malfunction.

Some Rogue owners who already received the software update have complained Nissan’s solution has not prevented continued braking problems on their vehicles.

This month, for example, a 2018 Rogue owner in Virginia told NHTSA she was “surprised to see that this incident happened for the third time with the vehicle after performing the update fix for the AEB malfunction at a Nissan service center two times prior to this.”

“Those are all the wrong ways of handling this,” Levine told 13 Investigates. “This is a defect that is dangerous, and if they were taking this seriously, they’d conduct a recall. They’d make sure every single person who owns one of these has been contacted, has brought their vehicle in and has had the repair for free. When they say ‘We’re going to do a service campaign’ that sounds a lot like a free oil change, that’s not taking things seriously.”

Other Rogue owners have expressed frustration that Nissan dealers have not been willing to fix their AEB problems during service visits because mechanics could not re-create the sudden braking issues.

And while 2019 Rogue owners have been filing a growing number of complaints involving unexpected braking in their vehicles, there is confusion about whether 2019 models are covered under Nissan’s quality action campaigns. Brown said a local dealership recently told her that her 2019 Rogue is not included in Nissan’s service campaigns, and Nissan’s corporate office made no mention of 2019 Rogues in the statement it sent to WTHR.

But the most recent Technical Service Bulletin obtained by 13 Investigates shows Nissan now acknowledges AEB problems extend not only to all 2017 and 2018 Rogue models, but also to 2019 Rogue, Rogue Sport and Rogue Hybrid vehicles, and to the 2020 Rogue. That bulletin, dated August 29, 2019, also says Nissan is exploring unexpected activation of the Rogue Forward Emergency Braking (FEB) and Forward Collision Warning (FCW) systems. It means approximately one million model year 2017-2020 Rogue vehicles sold in the United States could be impacted by the types of braking and warning problems described in NHTSA’s defects investigation.

Brown has asked Nissan to buy back her SUV. So far, that request has been denied. She said the automaker instead offered to pay $1,500 for her inconvenience – an offer Brown declined.

“They haven’t been able to fix it, and I don’t want this vehicle anymore,” said Brown. “I’m afraid for my life every time I drive it.”

Levine hopes Nissan will voluntarily issue a widespread Rogue recall to address what he calls “phantom braking” without waiting for NHTSA to require further action.

“You’re dealing with hundreds of thousands of them, and this isn’t just scary. It’s dangerous,” Levine said. “The complaints keep piling up. Our goal is to get this fixed before we see a fatality.”

Letter to take to the dealer

Nissan has not recalled its popular line of Rogue SUVs for problems related to unexpected activation of its automatic emergency braking (AEB) system. But in late August, the automaker acknowledged to dealerships that it had expanded a service campaign in an effort to remedy reported problems associated with AEB, as well as Nissan’s Forward Emergency Braking (FEB) and Forward Collision Warning (FCW) systems. This Technical Service Bulletin obtained by 13 Investigates shows Nissan is now addressing false activation of all three systems in the 2017-2020 Rogue, 2017-2019 Rogue Sport and 2017-2019 Rogue Hybrid. Nissan has not notified all Rogue owners about the service campaign. Customers who have experienced unexpected braking or false collision warnings can take the Technical Service Bulletin to their nearest Nissan service department to request service.