Diana Calkins adores her two dogs, but she's the first to admit they sometimes drive her crazy. 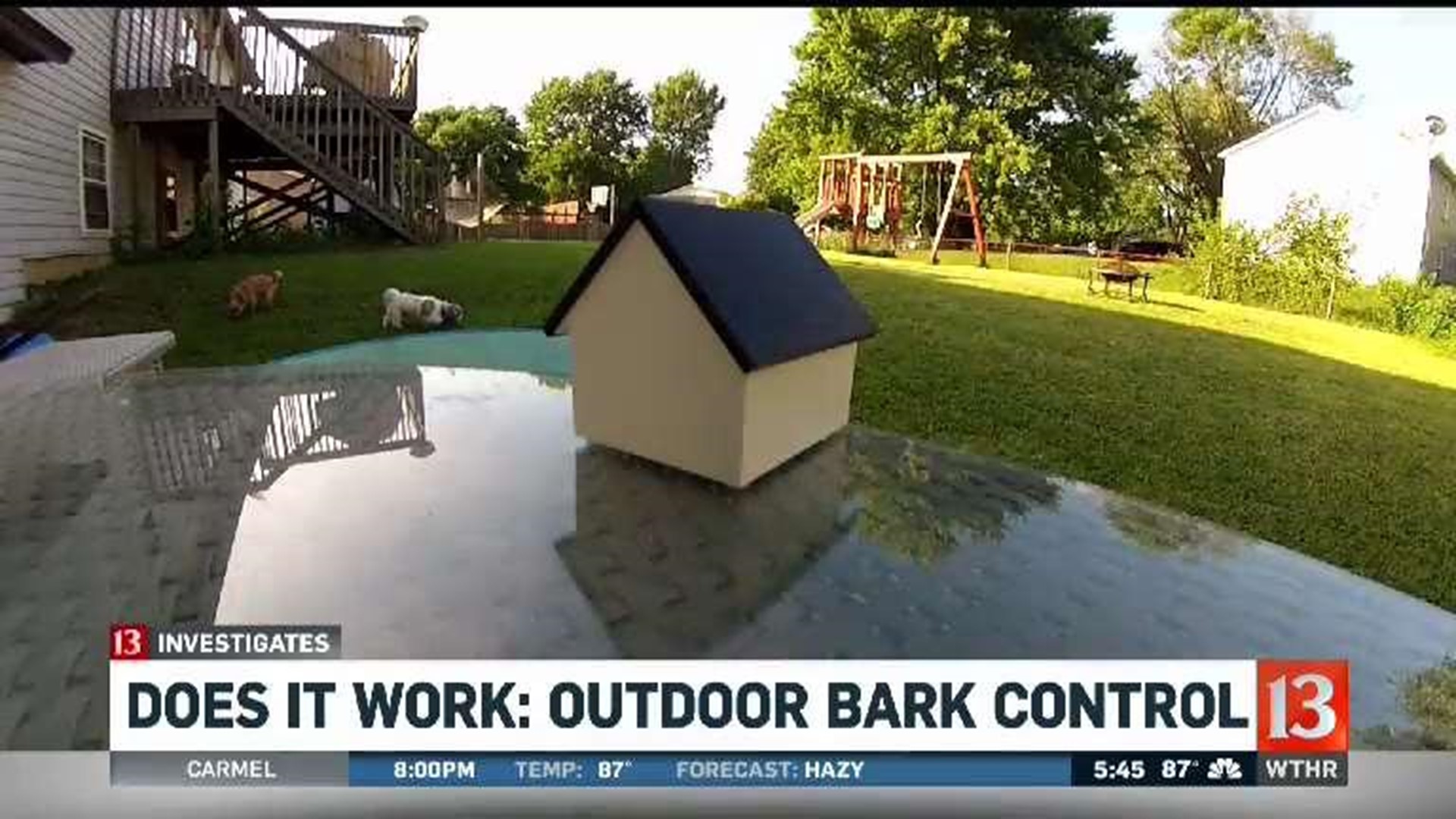 INDIANAPOLIS (WTHR) — Diana Calkins adores her two dogs, but she's the first to admit they sometimes drive her crazy.

Diana Calkins says her two dogs’ frequent barking hurts her ears and can be a nuisance. (WTHR)

JuJu (short for Junie B. Jones, the young, spirited girl who serves as the protagonist of a children’s book series) is a spunky Shichon who barks at the first sign of visitors.

Vicki, described by her owner as a “mostly Chihuahua rescue mutt,” barks at the first sign of, well, almost anything. Named in honor of Indiana Pacers all-star guard Victor Oladipo, Vicki is full of energy and in constant motion. “She’s smaller than the other dogs, but she’s fearless and has a 4-foot vertical leap,” explained Calkins.

The dogs are small, but when they are both awake, Calkins’ south side Indianapolis home can get very noisy.

“Anytime anyone comes in, they bark. Anytime the neighbors do anything out of the ordinary, they go crazy,” Calkins explained, shaking her head. “There’s incessant barking the whole time the neighbor mows his lawn. They bark at the neighbors’ dogs. And with these little dogs it's a very, very high pitch. It hurts your ears.”

Vicki (left) barks at a dog who lives next door. (DogBarks4)

That's why Calkins has had her eye on Outdoor Bark Control, a product that claims to use ultrasonic sound to stop dogs from barking. The device looks like a small plastic house and has a microphone inside. According to its user’s manual, when the Outdoor Bark Control unit detects the sound of barking, it emits its own high-pitch noise that “can be heard by dogs but is silent to humans.” That unpleasant, startling noise is supposed to annoy your dog and prompt it to stop yapping. When the barking stops, the ultrasonic sound stops, as well.

“Seems like a good idea, and I’ve been curious as to whether or not that works,” Calkins told WTHR, eagerly offering up JuJu and Vicki as product testers. So 13 Investigates purchased the device to see if it delivers on its promise to deter nuisance barking.

Set up was easy. The small, plastic device requires a 9-volt battery (not included) which Calkins installed in less than a minute. She then followed the product’s instructions to test the device’s audio sensors, which showed the Outdoor Bark Control unit was properly detecting the sound of barking.

Calkins then placed the product on her patio table to see what would happen.

Vicki and JuJu respond to the sound of a doorbell with little barking while the bark control device is operating. (WTHR)

The first few days of the test didn’t provide any useful results. Because of very hot temperatures, Vicki and JuJu spent most of their time indoors, out of range of the Outdoor Bark Control unit. Their frequent indoor barking prompted Calkins to move the device inside – something the manufacturer does not recommend. (Neither the user’s manual nor online materials provided details explaining reasons for not using the product inside.) She noticed an immediate impact.

“The minute I turned it on, they stopped barking,” said Calkins.

13 Investigates observed the dogs’ behavior as a visitor knocked on the front door and rang the doorbell, two triggers that normally result in prolonged barking. With the bark control device operating just a few feet away on its lowest setting, JuJu and Vicki both ran toward the front door and each let out a single bark in response to the noise at the door.

“Definitely a difference. They would have been barking liking crazy. It definitely worked,” Calkins said enthusiastically. “Usually there’s nothing that will distract them, and this seems to do it.”

But the excitement did not last long.

After the impressive indoor test, JuJu and Vicki went outside to play. Calkins returned the Outdoor Bark Control device to her backyard patio table and increased the unit’s sensitivity to a higher setting.

Within just a few minutes, a neighbor's dogs decided to come outdoors, too. Things got very noisy very quickly, with several minutes of sustained, intense barking by dogs on both sides of the backyard fence. The Outdoor Bark Control says it effectively stops barking up to 50 feet away. Obviously no one bothered to inform JuJu and Vicki.

Face-to-face with their nextdoor neighbors, the dogs did not seem to notice the presence of the anti-barking device. The unit appeared to be sending out ultrasonic noise – we could not hear it but did see a red flashing light indicating that the device was emitting a sound in response to barking – the entire time JuJu and Vicki were yapping.

“I don’t think it worked very well,” Calkins said, clearly disappointed and pausing for nearly 20 seconds while her dogs continued to bark at the canines next door. “As soon as those dogs came out, they were all barking like crazy. Obviously it didn't work on the neighbor's dogs either, and we were within 10 or 15 feet of the box and there seems to be no effect at all.”

If you browse online or at local pet stores for products that claim to deter barking, you’ll quickly find a number of devices that utilize ultrasonic sound.

A red light on the bark control device activates, indicating it is emitting ultrasonic sound as dogs bark nearby (RedLight)

Ultrasonic refers to sound frequencies above 20,000 hertz, which is the upper limit of sound that is generally audible to the human ear. Dogs have much more sensitive hearing – up to 45,000 hertz – so anti-barking products use frequencies in that higher-frequency range.

Aside from the effectiveness of such devices, 13 Investigates also inquired about their safety. Local veterinarians consulted by WTHR expressed few concerns about the technology’s impact on dogs.

“It’s not going to be hurtful to dogs, and it’s not going to hurt their eardrums,” said Denise Katz, a veterinarian and director of professional development at Noah’s Animal Hospitals.

“Are they safe? I believe yes, they are, within reason,” agreed Meredith Engerski, the practice manager at Allisonville Animal Hospital and Cottage Animal Clinic in Hamilton County. She recommends these types of devices be used only for short periods of time to train dogs since there are few published studies to show the long-term impact of ultrasonic sound on animals’ hearing.

“There is not a lot in the literature to suggest it leads to hearing loss or neurological problems in dogs … but I’d say there’s a lack of studies,” said Amanda Rigterink, a Lebanon veterinarian who specializes in animal behavior. “I do worry more about it being a nuisance and causing increased anxiety in dogs because they are a lot more sensitive to sounds than we are, so it can be bothersome.”

All of the veterinarians who spoke with WTHR said their customers have not found ultrasonic devices to be particularly effective in stopping unwanted barking.

“Some dogs might be bothered by it and stop barking, and some might be very agitated by the sound and bark more,” Rigterink said.

Katz said she does not recommend ultrasonic devices for homes with more than one dog because it may severely affect one dog where it doesn’t impact the other at all.

“You could also be in a situation where you may be correcting a dog that’s already shut up and doesn’t bark anymore, and if you have another dog that doesn’t care and keeps barking, that can create a hostile relationship between the dogs,” said Katz.

“Every dog is different. I've seen people try to use it and come in and say it hasn't worked because their dog is just fighting through it and they're just barking at whatever source [caused] the barking to begin with,” added Engerski.

Online reviews show mixed results for customers who purchased the same Elenest Outdoor Bark Control unit tested by Calkins. The product currently gets 2.4 (out of 5) stars on Amazon.com. Some reviewers wrote “works great” while others said it’s a “waste of money.” It is available from various online retailers for $30 to $45.

Overall, Calkins gave the product a grade of C-. She said at certain moments, the Outdoor Bark Control seemed very effective. At other times, JuJu and Vicki barked nonstop as if it wasn’t there.

“Still looking for solutions,” she said. “I kind of liked it in the house, but outside I don’t think it worked.”

Veterinarians warn pet owners against the idea that an ultrasonic bark control product will be a “cure” for their dog’s barking problems.

“They might modify behavior, but they don’t address the underlying motivations and reasons for the barking,” explained Rigterink, who runs Veterinary Behavior of Indiana.

“I recommend trying to find the reason this is happening — why is it happening — and then modifying that,” agreed Engerski.

How do you curb your dog’s barking

There is no one-size-fits-all solution for putting a stop to barking. “It really does depend on why they are barking in the first place,” said Mica Riedner, a professional dog trainer at Paws & Play Training Center in Fishers.

Here are Riedner’s tips for pet owners looking for relief from constant barking:

If there is a product you'd like 13 Investigates to test, let us know. Send information about the product to 13investigates@wthr.com. We’ll let you know if your suggestion will be featured in an upcoming 13 Investigates product test report.