After a week of inspecting rides at the Indiana State Fair, inspectors from the Indiana Department of Homeland Security were still busy Thursday morning looking for safety problems along the Midway at the fairgrounds. 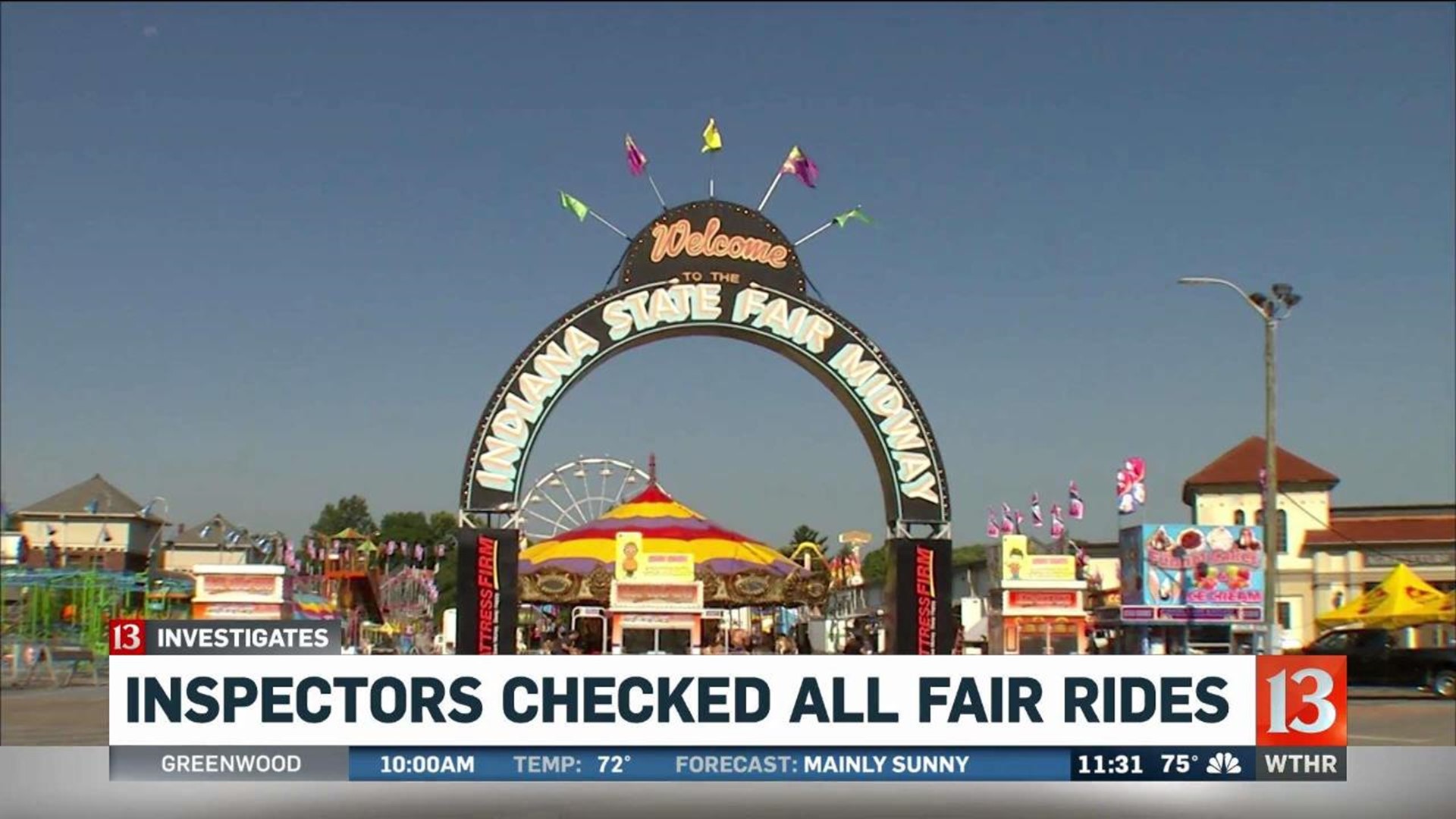 INDIANAPOLIS (WTHR) - After a week of inspecting rides at the Indiana State Fair, inspectors from the Indiana Department of Homeland Security were still busy Thursday morning looking for safety problems along the Midway at the fairgrounds.

"We're basically looking for everything," said ISDH chief ride inspector Tom Hendricks. "All the bolts, the shocks, the safety chains...we look at all of it."

13 Investigates watched as inspectors climbed under, over and through more than 50 rides that will open to the public Friday, the first day of the state fair's 17-day run.

Hendricks told WTHR inspections can take up to four hours for larger, more complex rides, as inspectors check for potential safety problems within the structural, electrical and mechanical components of each attraction.

During Thursday morning's inspections, Funkhouser found loose plexiglass on one of the Ferris wheel's gondolas. The material is part of the ride's safety features meant to keep people inside the ride. Hendricks showed 13 Investigates a cracked seat on a ride called "The Tornado." He said the crack poses an injury threat to a child due to the sharp edges of the fiberglass.

"That will have to be fixed before we'll approve it," Hendricks said. "We don't want nobody to get hurt. We want everybody to come enjoy [themselves] and go home at night."

IDHS inspectors say checking every bolt, pin and safety harness on fair rides is essential because malfunctions can be "catastrophic."

A catastrophic malfunction at last summer's Ohio State Fair is still on the minds of some Indiana inspectors. That accident killed one fair patron and seriously injured seven others when a car on the "Fire Ball" ride, which spins and swings passengers in a pendulum-like motion, separated while in mid-air.

"The whole car went flying off and over the side while in motion," a witness told NBC News.

"It's always on people's minds," Funkhouser said Thursday morning, moments after crawling out from an inspection under the Indiana State Fair ferris wheel support platform. "It's a learning experience for everybody."

Each ride has a sign with a number for riders to call if they suspect a problem with the ride.

By late Thursday morning, most fair rides had already been approved by state inspectors.

"These rides, I'm going to say they're safe to go," Hendricks said. "I'd let my own granddaughter ride them."

Inspectors say each ride has a sticker with a phone number that will connect fairgoers straight to the state's emergency operations center. They encourage anyone who sees or suspects a problem with a fair ride to call the hotline (888-203-5020) so inspectors can come back to investigate.