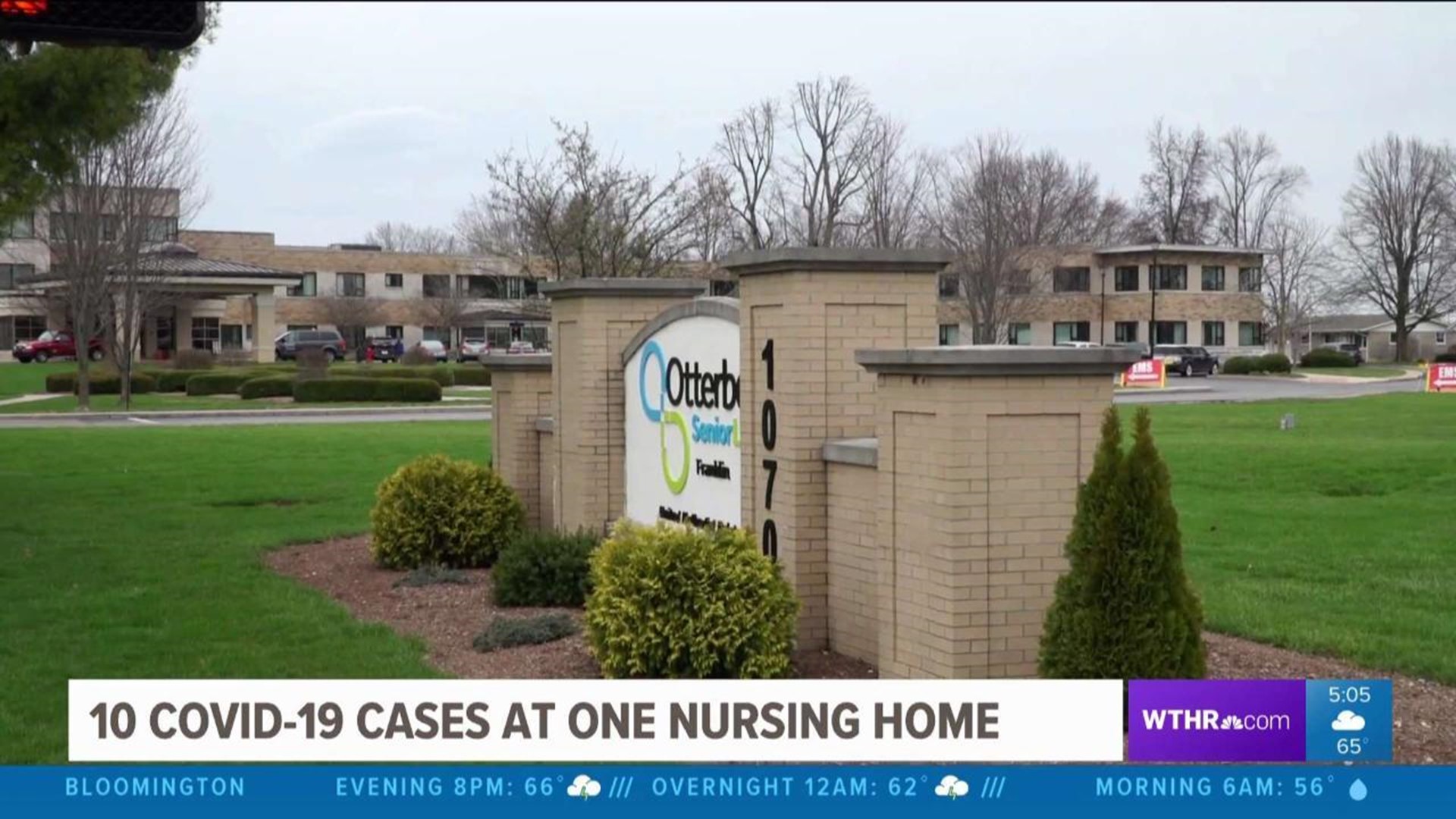 One of the nursing homes is Otterbein Senior Life Community in Franklin. The Johnson County Health Department will not name the second facility, citing federal privacy regulations.

As of Thursday afternoon, officials at Otterbein told WTHR ten people who live or work at the facility have tested positive for COVID-19. Eight of those people are elderly residents, one is an Otterbein nurse and the other is a contracted therapist.

How the virus spread

Otterbein spokesman Gary Horning said the first positive case was identified when the therapist learned she had COVID-19 on March 21, one week after she had last worked inside the Franklin nursing home. A day later, a resident at the facility was hospitalized with coronavirus symptoms. Testing confirmed his diagnosis on March 24. Horning said that resident is in stable condition in the hospital.

The company said a nurse has since tested positive for COVID-19 at a local hospital, and she is now recovering at home in isolation. When another resident was hospitalized with symptoms Tuesday morning – he would eventually test positive for COVID-19 – that prompted additional concern and testing inside the nursing home.

“Ten residents were symptomatic yesterday, all ten were immediately tested on site by the Indiana Department of Health,” Horning said. “Seven tested positive and were immediately transported to the local hospital. We are steadily monitoring their progress.”

The positive test results are a concern for local and state health officials because approximately 750 seniors live on the Otterbein Franklin Senior Life Community campus and, according to Horning, more than 300 people work there.

Attention is now is focused in the facility’s main building that houses more than 300 seniors who need skilled nursing and assisted living. That's where all the positive cases have been identified in a rehabilitation ward within the skilled nursing area. All residents in that ward have been relocated to other areas to enable cleaning.

“We want to deeply cleanse and disinfect the unit where the majority of people had been identified as positive so we can protect against any additional outbreaks,” Horning told WTHR. “And as a result of the tests, the Indiana Department of Health is helping us expand the testing program, so now we are beginning the process of testing additional individuals where most of these residents came from.”

He said the testing is scheduled to take place Thursday and Friday, and Otterbein would like to test as many residents and staff as possible.

“If we had our druthers, we’d test everyone in the building – both partners, employees, caregivers and residents. We realize that might be beyond the scope of available testing at this time,” Horning said, summarizing a series of steps the facility is taking to protect residents and staff:

Otterbein said they have been in frequent contact with families who have loved ones there. The director of the Johnson County Health Department said her agency has also been working to help contact families.

“No news is good news. We have been in the process of reaching out to families to make sure they are informed,” said Johnson County Health Department Director Betsy Swearingen, adding that she cannot reveal the name of the second Johnson County nursing home that has a confirmed case of coronavirus due to HIPAA regulations.

“Everyone who has come into contact with [COVID-19] at these locations will be notified and so will their families,” she said.

Not everyone has been impressed by the nursing home’s response.

Of particular concern was Otterbein’s decision to send seven residents to local hospitals late at night upon learning of their positive test results.

According to the Johnson County Joint Incident Management Team, emergency medical crews from Franklin Fire, Bargersville Fire, and Seals Ambulance transported the Otterbein residents to Johnson Memorial Hospital, Community South Hospital, and Franciscan St. Francis Health, even though the patients had “no symptoms to mild symptoms.”

The state health commissioner Dr. Kristina Box criticized Otterbein for that decision in an afternoon press conference at the Indiana Statehouse.

“We had a situation last night in which a facility sent several residents who had tested positive to the hospital when some could have been appropriately isolated at the facility at the time. This taxes our health care system and unnecessarily exposes health care workers and others to this virus,” Box said. “We need every facility to have a firm plan in place about how they will handle COVID-19 cases so we can reduce the spread of infection and preserve our hospital beds and health care resources for those who need them the most.”

Representatives from the Indiana State Department of Health, Johnson County Health Department and Johnson County Joint Incident Management Team will meet with officials from the nursing home Friday morning to discuss the facility’s COVID-19 plan and to determine what steps will be taken next.

Horning defended the nursing home’s response, saying he was frustrated to hear the health commissioner’s remarks.

“Otterbein Senior Life makes decisions based on our medical assessment and best judgment. The 7 sent [to hospitals] all had symptoms and a positive test of COVID. One was placed on a ventilator within 24 hours after leaving our community,” he told 13 Investigates. “We simply will not take unnecessary risks, especially when dealing with this extremely dangerous and lethal virus -- for the patient, the other at-risk residents in the community and our caregivers.”