13 Investigates searches for doctor who sent pregnant soldier into combat

The only person who can say why Private Ashley Shelton was sent to serve in Afghanistan despite five positive pregnancy tests is Dr. Jonathan Richard Coyle. 13 Investigates is on his trail to track down why he made the decisions he did with Private Shelton. 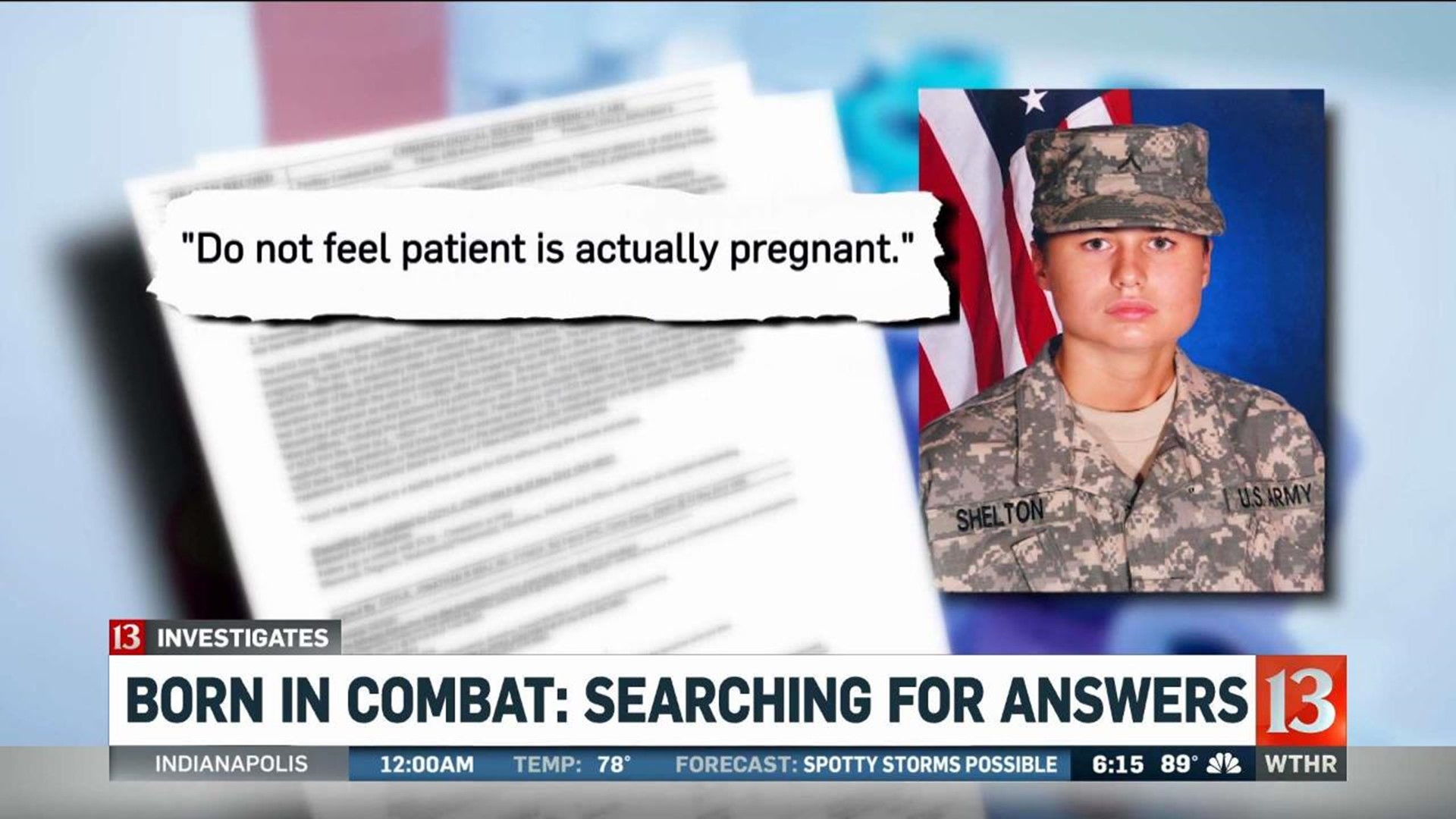 INDIANAPOLIS (WTHR) — 13 Investigates has been digging to find out more about an Army doctor who sent a pregnant Indiana soldier into combat.

Ashley Shelton and her son, Benjamin, shortly after he was born in Shindand, Afghanistan.

Private Ashley Shelton was sent into a war zone pregnant and delivered a five pound baby boy in 2012 with no forewarning and no prenatal care.

"They gave me shots for deployment plus I was working around chemicals that were hazardous," she told 13 Investigates.

The only person who can say why Shelton was sent to Afghanistan despite five positive pregnancy tests is Dr. Jonathan Richard Coyle.

Coyle is an Osteopathic Physician assigned by the Army to perform Shelton's pre-deployment screening. But Dr. Coyle isn't talking about it.

"Why? Why? Why did you deploy me?" she asked, repeating the same nagging question as if she were talking directly to Dr. Coyle.

"I was pregnant, but he still said I was not pregnant." she told 13 Investigates.

The doctor said the positive tests were a result of the soldier's exposure to mice.

Shelton believes the U.S. Army is covering up what happened by refusing to address how Dr. Coyle could blame mice for her positive pregnancy tests.

In the military publication, "Stars and Stripes" an Army spokesman confirmed in 2012 that an internal review was conducted and said "appropriate action had been taken."

But despite repeated requests by 13 Investigates for reports about that investigation, the Army won't say what action was taken or if Dr. Coyle was disciplined.

13 Investigates wanted to ask Dr. Coyle about Shelton's deployment, but finding him took us across the country.

According to the Army, Coyle was sent back to Germany until January 2014.

He was then assigned to an army clinic in Fort Stewart, Georgia before leaving the service in 2016.

Following that stint, Coyle worked at the Winn Army Community Hospital in Georgia before taking his doctor's license west along I-70 into the Rocky Mountains.

The doctor who approved Pvt Ashley Shelton for deployment to Afghanistan was working occasionally at the Grand Junction VA Medical Center in Colorado. (WTHR Photo)

13 investigates followed his trail to the Grand Junction VA Medical Center where he worked as a fill-in emergency room doctor and asked a receptionist if Dr. Coyle worked as part of the staff.

"He does work here occasionally yes," she said.

Coyle was not on duty that day and she could not say when he was scheduled to return.

"I don't know, their schedules are all over the place," she added.

One of Coyle's friends also told 13 Investigates Dr. Coyle was out of the country vacationing in Amsterdam.

13 Investigates sent several messages to the doctor, but he did not return our calls.

Inquiries by 13 Investigates into Dr. Coyle's status in Grand Junction raised many questions in Colorado. 13 Investigates went to check his medical license at the Colorado Department of Regulatory Agencies and could not find Coyle in the database.

Colorado state officials say they do not have any record of a Colorado medical license for Dr. Jonathan Coyle. (WTHR Photo)

Under Colorado State law, doctors, including those who do fill-in work, are "required to obtain and hold a license as a physician in that State."

The requirement includes former military doctors unless they are "commissioned" and working under military orders.

Colorado also works with the Interstate Medical Licensure Compact to help doctors who work state-to-state get screened and licensed faster.

The State of Colorado reports "there are no public documents or records for licensure for Jonathan Richard Coyle."

Officials from the Interstate Compact tell 13 Investigates Coyle has not applied either.

So how is Dr. Coyle working in the emergency room of the V.A.?

A controversial VA policy allows doctors with a valid license from any state to work in VA facilities across the country. The VA relaxed its rules so that doctors do not have to get a license in the state where they are working, as long as they have a valid medical license somewhere.

Critics of the VA policy worry background checks are inadequate.

The Grand Junction V.A. refused to answer questions about its verification standards and told 13 Investigates Dr. Coyle was hired as a contractor through one of two staffing agencies.

But A-Team Solutions, the staffing agency that currently holds the V.A. Contract in Grand Junction, told 13 Investigates Dr. Coyle is not one of its doctors. The contractor also revealed it requires a three month verification process for the doctors it places in temporary jobs.

A second staffing agency, Loyal Source, that worked the Grand Junction VA did not answer our questions about Dr. Coyle.

Back in Indiana, Pvt. Shelton wants to know if Dr. Coyle was held accountable for what happened to her and ultimately her son, Benjamin.

Doctors warned Ben could suffer from congenital birth defects after being exposed to anthrax and other vaccinations.

In an email Shawn Montgomery, the public affairs officer with the hospital, wrote:

Montgomery would not say why the VA took action.