Late Thursday afternoon, in a statement sent to 13 Investigates, DCS director Terry Stigdon admitted the department's legal work had indeed "fallen short of the standards I have set for our agency." 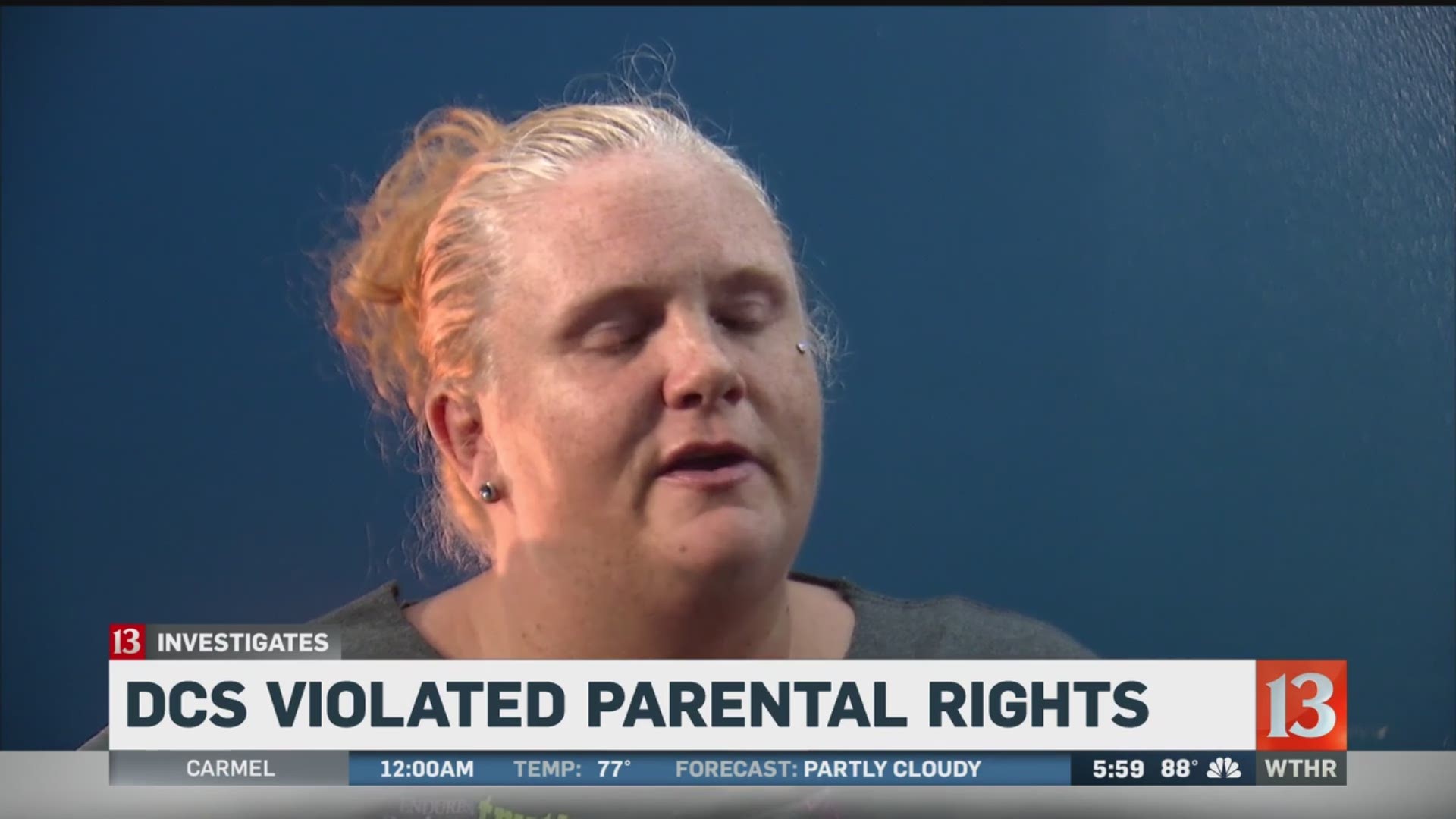 INDIANAPOLIS (WTHR) - Judges from the Indiana Court of Appeals have issued a scathing rebuke of the state's Department of Child Services, saying the agency repeatedly violated parents' rights. The appellate judges identified "significant violations of due process occurring in termination of parental rights cases throughout the state."

Late Thursday afternoon, in a statement sent to 13 Investigates, DCS director Terry Stigdon admitted the department's legal work had indeed "fallen short of the standards I have set for our agency."

Stefanie Thomas and her daughter

Attorneys involved in several cases cited by the Court of Appeals told WTHR they were surprised by the judges' strong admonishment and by DCS's admission that it made mistakes. "It is very rare [the State] would concede a point like that," noted Anderson attorney Dorothy Ferguson. She filed the first case cited by the court, representing a mother who had lost her parental rights.

The Court of Appeals cited a "disturbing trend" with 10 cases it received between September 2017 and March of this year. In each of the cases, one or more parents appealed the termination of their rights, and DCS asked for the case to be sent back to the trial court rather than have the appellate judges issue a ruling.

In a July court order, the Court of Appeals formally admonished DCS. The judges wrote, "DCS essentially concedes that [the parent appealing the termination] has either not been provided with adequate notice or that their due process rights have been violated." The judges criticized DCS for repeatedly requesting that the cases be returned to a lower court rather than submitting a formal response to the appeals, thereby avoiding DCS having to defend its actions.

The details of all the cases are not publicly available because these types of child welfare cases are typically sealed in the courts.

"I thought you forgot about me"

As her struggles continued into last summer, she learned DCS had terminated her parental rights at a July court hearing that she did not know about.

"I never got papers. I never got any notice," Thomas told WTHR. "The only thing I got was a text after the hearing .... the case worker wouldn't talk to me no more and said 'your rights have been terminated.'"

Thomas learned she had only a short time to appeal the state's decision. She filed her appeal and was assigned public defender Dorothy Ferguson, who immediately recognized problems with the way in which DCS handled the case.

"She was never notified of the court date or given a petition letting her know your rights are going to be terminated if you don't show up at this hearing on this day," Ferguson said. "I told her right away I think we have a good chance of winning the appeal."

Thomas' attorney then received a surprise phone call from the Indiana Attorney General's office. She discovered the AG, who represents state agencies such as DCS, was also concerned by DCS's actions and wanted to help her client.

"They told me they agreed with our position and wanted to file a motion to send the case back to the trial court," recalled Ferguson. "I was like 'What? This is crazy!' This has never happened to me in my entire [career]. That's really unheard of."

"Wow! This is really strange. They are conceding, and they never do that."

"Wow! This is really strange. They are conceding, and they never do that," Ferguson said to 13 Investigates.

The case was returned to Madison County court and, after extensive counseling and treatment, Thomas' parental rights were restored. But with her then 12-year-old still in foster care, Thomas would not see her daughter for another 10 months.

"She told me 'I thought you forgot about me, mom,' and that broke my heart," Thomas told 13 Investigates. "The important thing is she's back with me now, and it's wonderful. We're very grateful for each day we have together. [DCS] gave up on me but I fought for a second chance because being a mother is everything. She was taken away once, and I'll never let that happen again."

Bad for parents and children

Situations like what happened to Thomas are a prime example of the heartbreak and fear that can happen when the child welfare system fails.

"You can't create this type of instability in a system that wields a lot of power over people's lives," explained Katie Kelsey, director of the Children's Law Center of Indiana. The non-profit center works with families and courts on a variety of legal issues including child welfare cases.

"If you have managed to terminate a parent's rights to that child but you didn't do it properly, then that termination can get overturned on appeal and you've put that child's stability back in play again and it creates this massive limbo for the child," Kelsey said.

The Court of Appeals also took aim at the trial courts, reminding judges that they too have a "duty to ensure that litigants' due process rights are not violated."

In its most recent opinion, the judges were so frustrated by "repeated violations" of the parent's rights and other failures of the trial court, they wrote, "We are at a loss as to any possible, just reason for such conduct."

The appeals court does not frequently use that type of language, according to Kelsey, who has been working with child welfare cases for more than a decade. She and other attorneys who spoke with 13 Investigates were surprised by the strong rebuke, the chastisement and the pattern of violations.

"Any time you get an admonishment from an appellate court, it's something to be taken seriously," she said.

The cases of concern originated in seven counties, including Lake, Madison, Monroe, Porter, Spencer, Tippecanoe and Vanderburgh. Four of the cases were from the same courtroom in Vanderburgh County.

In the first seven cases, the Court of Appeals simply granted the DCS request to send the case back to the trial court without a ruling.

Then, by the eighth case, the Court spotted a pattern. That is when it issued its July 9 order with a formal admonishment of DCS. An order from the Court carries some weight but not the same impact of an opinion.

About two months later, on September 7, the Court ruled on a ninth case involving the termination of parental rights in which DCS made the same remand request. This time, the judges issued a formal opinion that reversed the trial court's decision to terminate the mother's rights and sent the case back to the lower court.

The Court of Appeals also reversed and remanded the tenth case it cited. Judges wrote that the circumstances were particularly "unusual and alarming." In that case from Spencer County, a DCS worker became involved in a sexual relationship with the father and lied about drug test results. She was one of two case workers fired because of improper behavior during the case. The opinion, issued September 11, notes that the State concedes "the chaotic and unprofessional handling of this case violated Mother's and Father's due process rights."

"How many other cases are out there without proper due process?"

With so many cases in the spotlight from the Court of Appeals, Ferguson wonders, "How many other cases are out there without proper due process?"

In a statement sent to 13 Investigates, DCS director Terry Stigdon said she agrees with the Court of Appeals.

"After a thorough review of the cases in question, I believe our legal work has fallen short of the standards I have set for our agency. We are working to recruit and retain top legal talent and provide additional staff training.... as well as build and maintain strong relationships with judges across Indiana."

Stigdon began as DCS director in late January after being appointed by Gov. Eric Holcomb.

Some public defenders told 13 Investigates they are aware of other cases in which DCS allegedly violated parental rights during termination hearings, and they expect more cases will be brought to light in the months ahead.