19-year-old Pam Milam's body was found in the trunk of her car on campus. 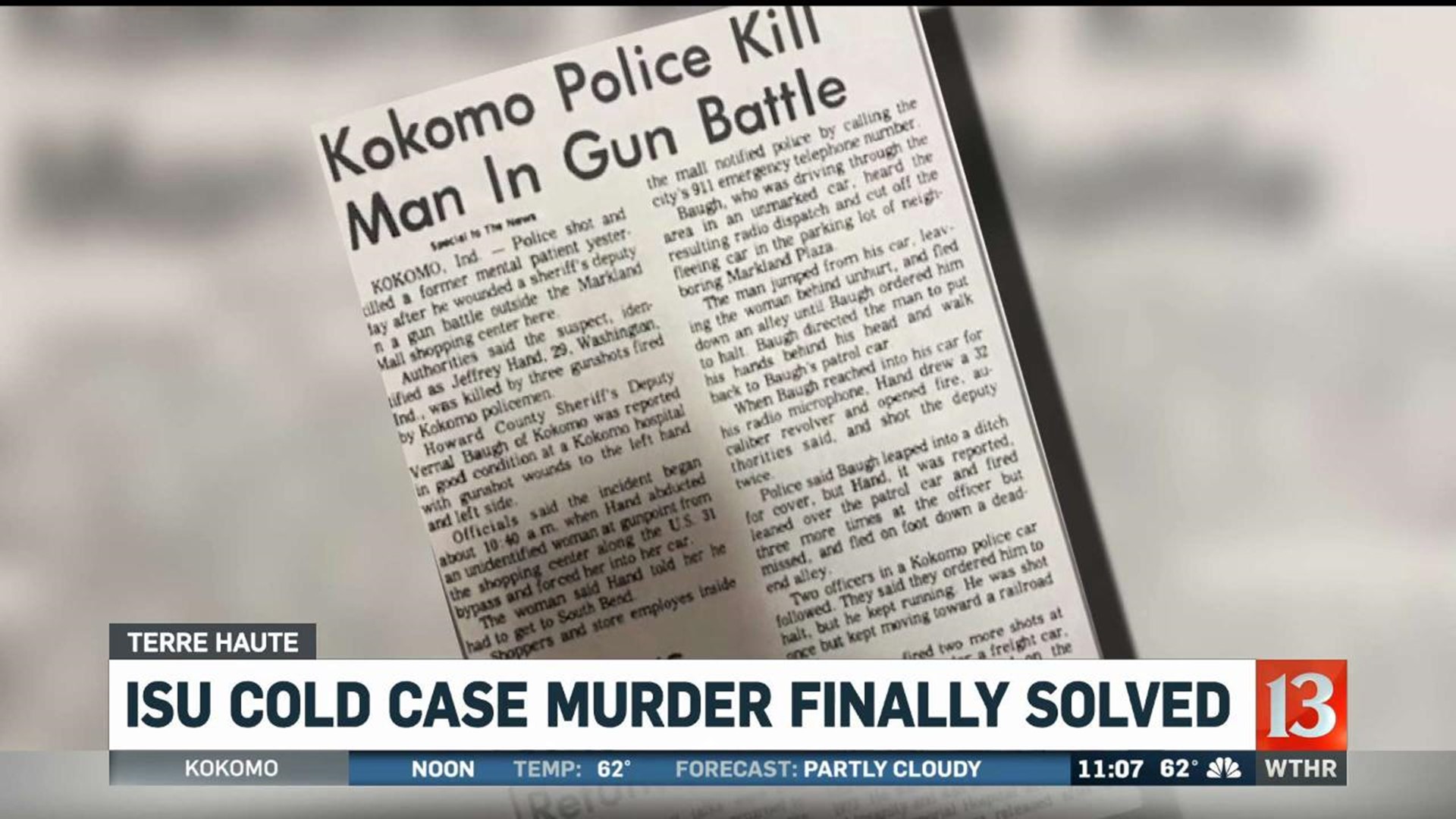 INDIANAPOLIS (WTHR) — After nearly 47 years, police say they have identified the killer of an Indiana State University student.

Pam Milam was 19 when her body was found in the trunk of her car on campus back in 1972. She was tied up and strangled.

Clothesline was used to bind her hands and another piece was around her neck. A gag in her mouth was held in place with tape.

In the car, more of the clothesline was used to bind her along with the tape was found.

All of the items had been used at a rush party that Milam had been at earlier and were in a box of decorations she had been carrying to her car.

Police were left with no witnesses and no description of the suspect.

About seven weeks after the murder, Robert Wayne Austin was arrested for a series of attempted and successful abductions on campus. Police say he sexually assaulted the students and then later returned them to the campus.

Austin was convicted on the other abductions, but police were unable to link him to Milam​'s murder.

No other DNA matches were found. In 2001, police were able to identify a fingerprint on Milam's glasses found in her car. It did not match Austin either.

In 2008, Terre Haute Police Chief Shawn Keen reviewed the case himself. The ropes used in the murder helped establish a partial DNA profile. That helped establish it was one male suspect involved.

In 2009, familial DNA testing was requested, but it was never approved.

In 2018, a DNA sample was used to try and match DNA submitted to genealogy companies. It came back with a potential family that the DNA might have come from.

Working through that family tree, two potential suspects were identified.

Jeffrey Lynn Hand was then identified through more DNA testing. He had already been convicted of picking up a couple who was hitchhiking and killing the husband in 1973. The woman had managed to free herself and run to a neighbor who called police. Hand was found not guilty by reason of insanity.

In 1978, he was spotted in Kokomo trying to abduct a woman. An officer witnessed it and went after him. Hand shot that officer and was then shot and killed by another officer.

"I never thought we would get to this day," said Charleen Sanford, Pamela's older sister. She then thanked Terre Haute Police Chief Shawn Keen for never giving up on the case.

"Pamela was taken from us by one of the cruelest methods possible," said Sanford. "The pain of losing a child, a beloved sister, a friend never goes away."

Sanford said they were happy to learn Hand was dead and not still out there living his life or hurting others.

"We will continue to miss Pam," Sanford said.

"Losing her was like losing part of my body and my soul," Shiela said.

She regretted that her parents died never knowing who killed their daughter.

The prosecutor determined that if Hand were alive today, he would be charged with the murder.