Of all the recovery programs for drug addicts, one of the most successful in our state right now is in an unexpected place. Hoosiers are ending addiction by going to jail. 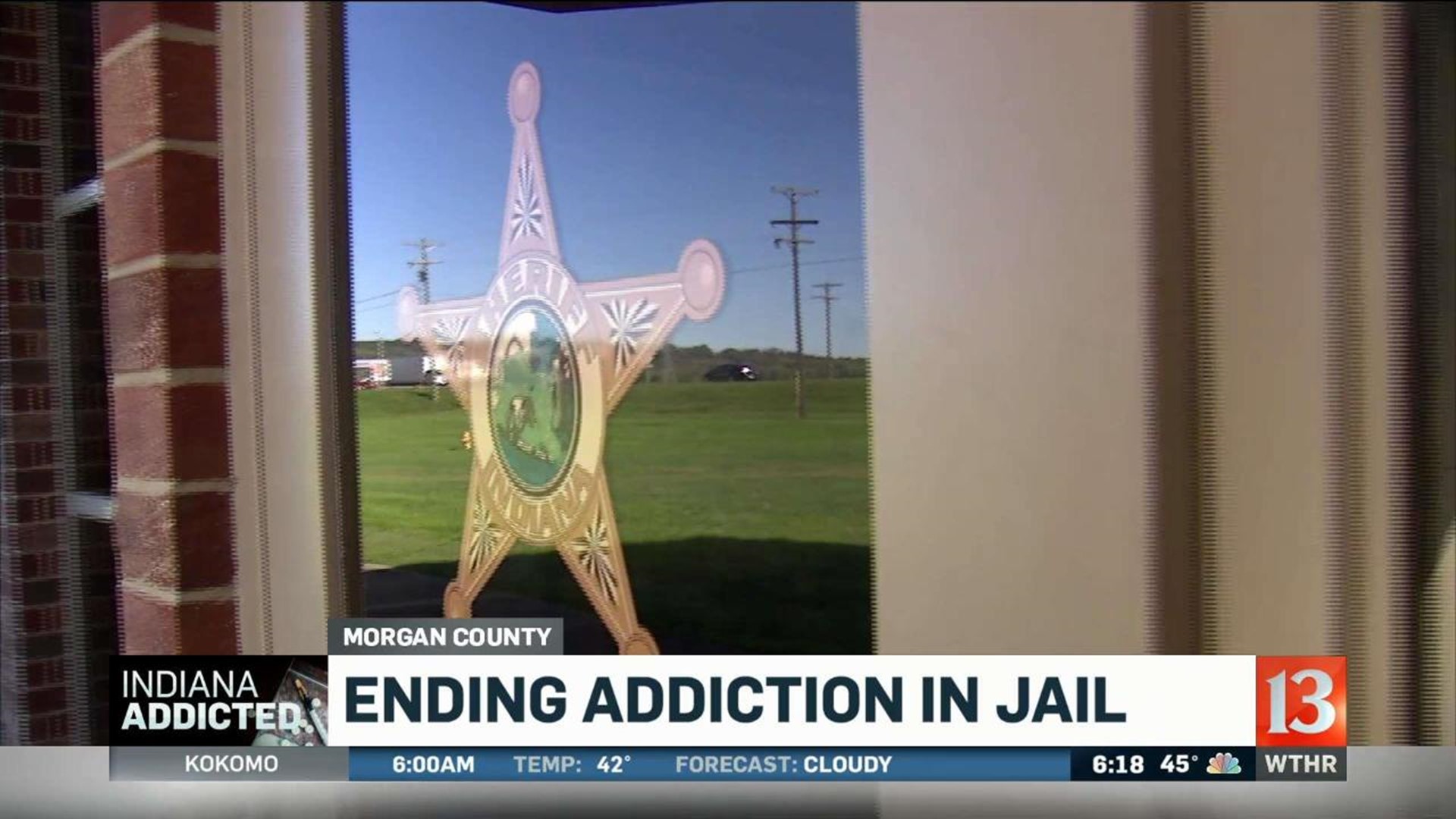 MORGAN COUNTY, Ind. (WTHR) - Of all the recovery programs for drug addicts, one of the most successful in our state right now is in an unexpected place. Hoosiers are ending addiction by going to jail.

Time spent simply playing with her kids is precious to her now because a couple of years ago, this Martinsville mom lost that.

"I was a totally different person back then," Bennett said of herself two years ago.

“Getting arrested and coming to jail saved my life.” Stephanie says Morgan County’s addiction recovery program showed her how to live. You can SEE the difference in before & after pics. 6pm @WTHRcom pic.twitter.com/IqbelKTpW6

Bennett's addiction snowballed from alcohol and marijuana in high school to ecstasy and cocaine in college. Eventually, prescription pills and meth controlled her life.

But she finally broke free of addiction by getting locked up in the Morgan County Jail.

While serving felony time, she went through RSAP, Morgan County's "Residential Substance Abuse Program" Paid for by grants, not taxpayers, RSAP is intense behavioral counseling. There are no reduced sentences in exchange for participation, just hard work for 100 inmates a year.

Addicts say they're actually grateful they got put in this jail.

"It's the only program I have that's a non-time cut program that I have inmates that want to be here," said Morgan County Jail Commander David Rogers. "I would say at least 80 percent of our population wants to participate in this program."

Eyewitness News asked a roomful of inmates if they were glad to be in jail.

Every hand went up.

"Judge Williams sent me to do all my backup time and by doing that, he saved my life," Martin said. "I was down a dangerous path and there's not a doubt in my mind that my 15-year-old would have been motherless had he not sentenced me like he did. Had the commander not approved me for RSAP, I would have went right back out and done the same things again."

"I'm tired of being a slave to it," added inmate Jonathan Critser. "I've lost family relationships that I've ruined. I've lost friends. I'm here and this is working."

"Getting arrested and coming to jail saved my life," Bennett said.

Commander Rogers says RSAP has a 72 percent success rate. That means most graduates don't ever use drugs again.

They don't come back to jail. They stop committing crimes.

"Every day they're not back is a day the taxpayers are having a success. Every day they have a job, that's success for everyone," said Judge Brian H. Williams, Morgan County Superior Court II. "This makes you feel better about what you're doing because anyone who is in the business of just putting people in jail to warehouse them and then see them come out the back no better, no different than they were, if you like that, I don't think you're in the right position. Having a program where they can't walk away, they can't just refuse to comply, it's makes a difference."

"The odds are against us when we walk out them doors and anything that I can do to even them odds, I'm game to learn," said inmate David Sturgell.

What they're learning in RSAP is more than addiction recovery. It's a practical plan for how to live without drugs. There's spiritual support, conflict resolution, how to raise children, how to get and keep a job.

Licensed addictions counselor and RSAP coordinator Gus Matthias, who's 29 years sober, is their guide. He believes every single one of the inmates has value. That means the world to them.

"He sees something in us before we see it in ourselves," Martin said.

"We don't take any guff. We don't allow any attitudes. Acceptance is the answer to all problems," Matthias explaind. "Then we work on attitude and behaviors, thinking errors, character defects, so it's not just about not using it's about what it takes to be not using."

"Just being able to have the tools necessary that I've always needed, it's given me life, you know," said inmate Brandon Eggers.

Rick Lang is the Morgan County reentry officer. He used to put people like this away as a detective. Now, he's on the other side.

"Honestly the goal is still the same as Rick Lang the reentry officer as Rick Lang the former detective: reduce the rate of crime and the amount of victims out there," he explained. "I try to find a place for them to live, find gainful employment. And you get what we call a foundation group around them of people that, for lack of a better word, are their guardrails to keep them in the lane."

That foundation group includes former addicts who are essential to this program. RSAP graduates volunteer in the jail and provide a support system that continues on the outside.

"I come back in here to show these guys that there is hope out there," said RSAP graduate and volunteer Josh Claywell. "I'm a productive member of society now. I have a good job where they trust me."

"My passion is to help these women not make the mistakes I made," said volunteer Holly Jones. "They have all the opportunities and all these people standing behind them, working with them, fighting for them."

Bennett is now working to become a licensed addictions counselor. She just graduated Ivy Tech and will soon attend Indiana Wesleyan. She has a career, a home, a family again.

She plans to keep coming back to jail to help others survive addiction. Being confined in Morgan County set her free.

"My heart feels so full afterwards. It's so much better than any high any drug could ever give me - being able to help other people and be here with my kids," Bennett said. "I'm here for them. They have their mom."

Clark and Monroe Counties both now have similar RSAP programs after observing the success in Morgan County.

According to Jail Commander Rogers, it's not only helping addicts, but also helping the overcrowding problem at his facility and the jail is calmer with fewer fights. He says inmates are behaving so they can get accepted into RSAP and beat their addiction for good.