Thousands of employees of a popular Indiana-based restaurant chain have been compromised in a breach of tax documents. 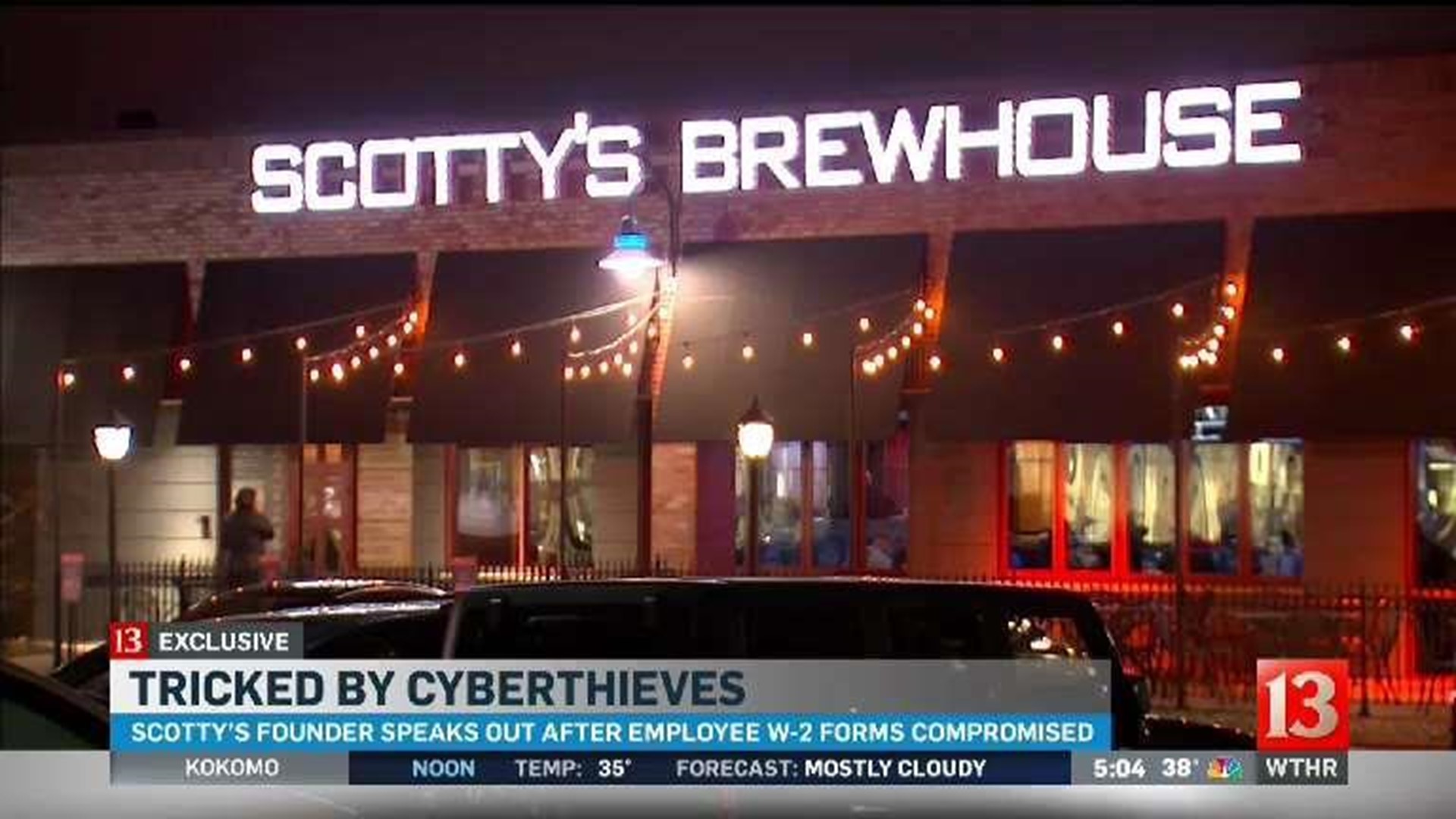 INDIANAPOLIS (WTHR) - Thousands of employees of a popular Indiana-based restaurant chain have been compromised in a breach of tax documents.

Metro police say someone posing as Scott Wise, the founder of Scotty's Brewhouse, now has W-2 data for all 4,000 of its employees. The suspect used the false identity to trick the restaurant's payroll manager into emailing them the paperwork.

Just last week, the IRS sent out a warning about the same scam, which is targeting payroll and HR departments nationwide.

Scotty's has confirmed that no customer information was obtained by the scammers in Monday's scam, but all workers were affected.

Wise, founder of Scotty's Brewhouse, spoke exclusively with Eyewitness News about the data breach and how the company is now trying to help its workers recover. He says he was sickened when he learned that scammers violating the work family he's worked so hard to build and protect.

"You just never think it's going to happen to you and then it does," Wise said. "It feels like someone has broken into your home and exploited you and it's not just my home and me but my literal Brewhouse of thousands of employees. Every single person in our company has been affected."

That totals 4,000 employees across 19 restaurants and four different states. Their social security numbers and other personal data is now in the hands of criminals.

Scott Wise's data is out there too.

The FBI, IRS and state and local police are all on the case, investigating who's behind the scam.

"It makes me sad. It really just makes you question how somebody out there can profit from so many people that work so hard in a day-to-day business and it just takes one thing like this to shake people...including myself," Wise said. "We jumped on it with the FBI and police right away. The message went out to our employees a little over 24 hours from the minute we knew about the situation."

Investigators call it a "spoofing" scam.

It tricks workers into giving up personal information by using a corporate officer’s name to request W-2 forms from payroll or human resources departments.

In this case, on Monday afternoon, the scammers used Scott Wise's name as bait. Wise learned of the breach while finalizing plans for the company's Employee Appreciation Week.

His Human Resources director came into his office with a question:

"Why'd you want all the employees W-2s? And I said, 'I didn't request any W-2s'," Wise explained. "He immediately went to the IT and said 'Code Red'."

Police say a payroll manager got duped into sending W-2 information for all employees to an email address very similar to Scott's, one she thought was Scott.

"It was similar enough that she felt comfortable sending the information out. That person...is beating themselves up now," Wise said.

This email scam requesting W-2 information is actually making the rounds across the country. The IRS recently sent out a warning.

"The average person really needs to take special precautions on those types of requests," Hill said. "You have scams that really take advantage of people."

Hill says once information is compromised, his office can help those who are affected.

"We can help them with credit freezes and take those types of safety precautions to try to get out in front of whomever might have the information and whatever their ill-gotten purpose may be," he said.

As a company, Scotty's is now taking extra security steps. Wise says they're working to strengthen firewalls on computer systems and get better training for workers.

"We're going to go through additional training within our own team to make sure that everyone understands proper protocols for requested information," Wise said.

They're also offering help for workers whose data is exposed.

"We've set up an 800 number for all our employees to contact me personally. The phone is on my desk so I'll be answering questions from all my associates. We are going to pay for every single employee's credit monitoring services for the next year. We're trying to do everything we can to make it right with them."

The hope is to minimize damage from a major breach.