The USDA is now investigating because suspicious packets of seeds from China and the Solomon Islands have shown up in people's mail recently in all 50 states. 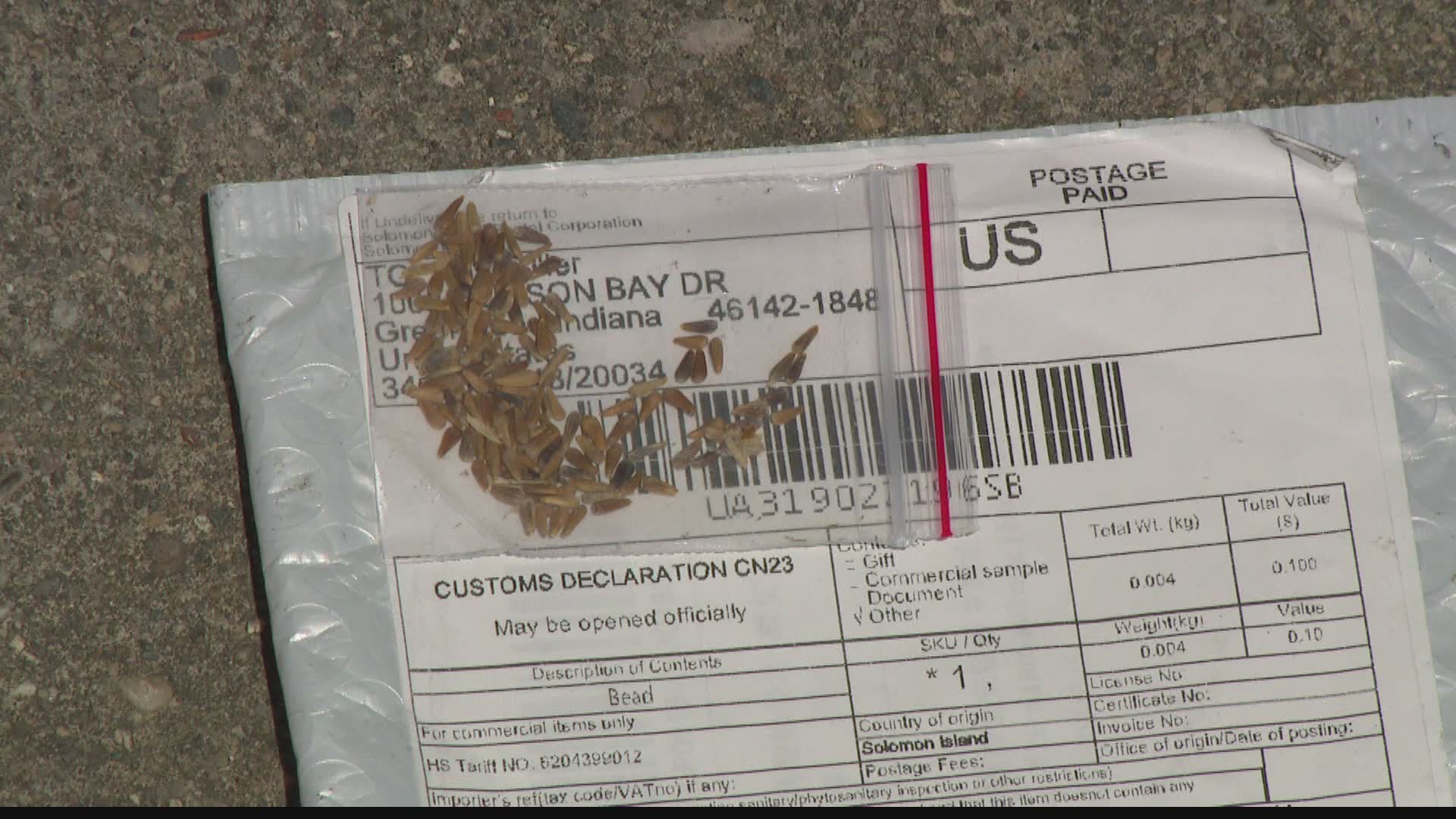 Lots of Hoosiers are getting unsolicited packages of seeds in the mail from China. It's something happening all across the country right now.

The USDA and the Indiana State Seed Lab is warning not to plant them -- or even throw them away. Instead, they want people to send the seeds in for testing.

Cathi Fuller got the mysterious mailing Friday at her home in Greenwood.

"My husband brought it in with all the mail, and I looked at it, and I thought my son had ordered something from one of the websites again, so I just opened it," Fuller said.

The label claimed it contained jewelry and beads, shipped from the Solomon Islands. But inside was a small bag of seeds no one in her family had ordered.

"When I saw it was a seed packet, I immediately recalled that I had seen different posts on Facebook about the fact that these packets were showing up specifically in Virginia, Georgia, Utah," Fuller said, "and I told my husband 'there's something weird going on.'"

Her inner alarm was right.

The USDA is now investigating because suspicious packets of seeds from China and the Solomon Islands have shown up in people's mail recently in all 50 states. As of Tuesday, there were 80 reports filed in Indiana.

"It's just ominous," Fuller said. "It's creepy. Why did this get mailed?"

We took her questions to Don Robison, the Seed Administrator for the Office of Indiana State Chemist.

"We don't know. And that's part of the danger here. Danger with a small "d" — I'll say that," Robison said. "We think that they're probably just flower seeds and vegetable seeds; however, we don't know that."

Robison said the seeds may look harmless, but the plants they produce could be noxious weeds, invasive species or come with diseases that might damage crops, soil and water.

Credit: Cathi Fuller
A closer look at the seeds reportedly shipped from China.

"Because China would have different diseases, different invasive species than we do," Robison explained, "we want to make sure this doesn't get planted and doesn't go to the landfill either, which is the same as planting it."

So if you get unsolicited seeds in the mail, Robison says don't plant them. Don't throw them away. Instead, send the seeds and all packaging or drop them off at the local USDA APHIS branch in Franklin:

APHIS stands for Animal Plant Health Inspection Service. They're taking the lead on testing and investigating the seeds locally.

Cathi Fuller dropped hers off on Tuesday afternoon, in hopes that experts solve the mystery.

"I just know this needs to get to somebody's hands besides mine," Fuller said.

The USDA said in its release on the seeds that it believes they are part of a “brushing scam.” That's where people receive unsolicited items from a seller who then posts false customer reviews to boost sales.

RELATED: People are getting mysterious seeds in the mail from China; states warn you should report them, not plant them