How bald eagles returned to Indiana

In the late 1970s and early 1980s, you'd be hard-pressed to find one bald eagle anywhere in Indiana. 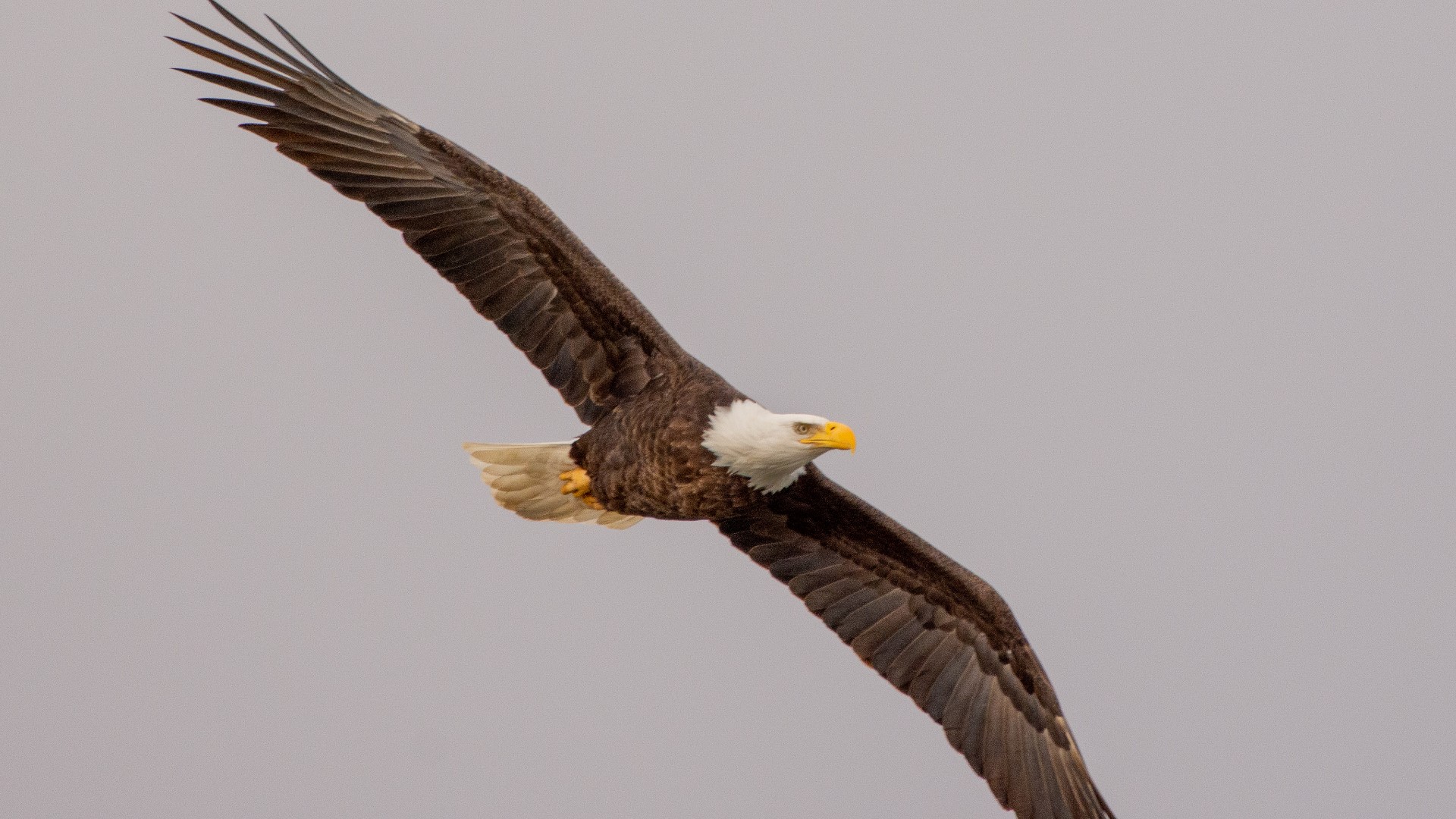 INDIANAPOLIS — You might just call it one of Indiana’s greatest comeback stories — and it has nothing to do with athletes, business or wealth.

“It is truly beautiful,” said Bob Burchfield, as he peered through his telephoto lens to capture a picture of a pair of bald eagles in flight near their rural Greenfield nest.

“The first time those eagles fly over your head and you see that huge wing span, you don't know whether to keep shooting photos or run for your life,” he laughed.

Burchfield is among a number of bird-watchers who can be found every morning and afternoon gazing at the birds as they soar around the countryside and grab fish in nearby waterways.

They never imagined the pair would live down the road from them, especially considering how close we came to never seeing one at all.

In the late 1970s and early 1980s, you'd be hard-pressed to find one bald eagle anywhere in Indiana. Ornithologists said they were “extirpated,” meaning they were no longer nesting in the state.

After pesticides and hunting nearly killed off America's symbol of long life and independence, Will Schaust, Director of the Ornithology Center at Eagle Creek Park, said the bald eagle was declared endangered, but work began to bring them back.

“The recovery of the bald eagle is one of the greatest conservation success stories in Indiana,” said the Indiana Department of Natural Resources in a statement.

A combination of legislative changes and conservation efforts put bald eagles on the road to recovery. The U.S. Congress passed the Bald Eagle Protection Act in 1940 to prevent the killing of bald eagles. DDT (Dichlorodiphenyltrichloroethane) was banned nationwide in 1972. In 1973, bald eagles were one of the first species listed as federally endangered under the Endangered Species Act. State agencies began restoration efforts to meet conservation goals for eagles as a result of this listing.

Between 1985 and 1988, 73 bald eagles from Alaska and Wisconsin were raised and released at Lake Monroe in Bloomington.

“A lot of hard work went into restoring eagle population,” Burchfield said. “[They were] released there, and nesting towers were used to promote their survival … and then just monitoring, preserving habitat and preserving food sources."

Today, the Indiana Department of Natural Resources reports nests in 88 of the state’s 92 counties.

In 2020, more than 350 nests were reported statewide. Soon after, the Natural Resources Commission removed the bald eagle from Indiana’s list of state endangered and special concern species.

Advocates say it's fitting as America's bird, that the bald eagle once again proves its strength to endure.

"And some people, what was it a turkey, was supposed to be the original one?” Burchfield asked. “No, I think they made exactly the right choice!"

Click here to learn where to find bald eagles in Indiana.

Bald eagles remain protected by federal law. If you see one, the DNR said it’s important to observe the birds and their nests from a distance of 330 feet.

Sometime later this year, you’ll be able to get up close with Eagle Creek Park’s newest addition – a bald eagle ambassador.

The eagle was born in April 2020, but fell from its nest in Mentor Marsh near Cleveland, Ohio. He was taken to a rehabilitation center and then picked up and moved to Eagle Creek late last year.

Schaust said the eagle has a permanently damaged left wing, so he can’t fly and wouldn’t be able to survive on his own. So Schaust is working with the eagle every day, training him to be a part of the park’s program to educate people about bald eagles.

And you can help name him! The park is trying to raise $5,000 for enclosure renovations, veterinary bills and fish for the eagle to eat.

You can vote for his name with your donation, choosing from the following options: Quill, Fisher, River, or Carson.