The slow-churning remnants of Tropical Storm Imelda flooded parts of Texas on Thursday, leaving at least two people dead and rescue crews with boats scrambling to reach stranded drivers and families trapped in their homes. 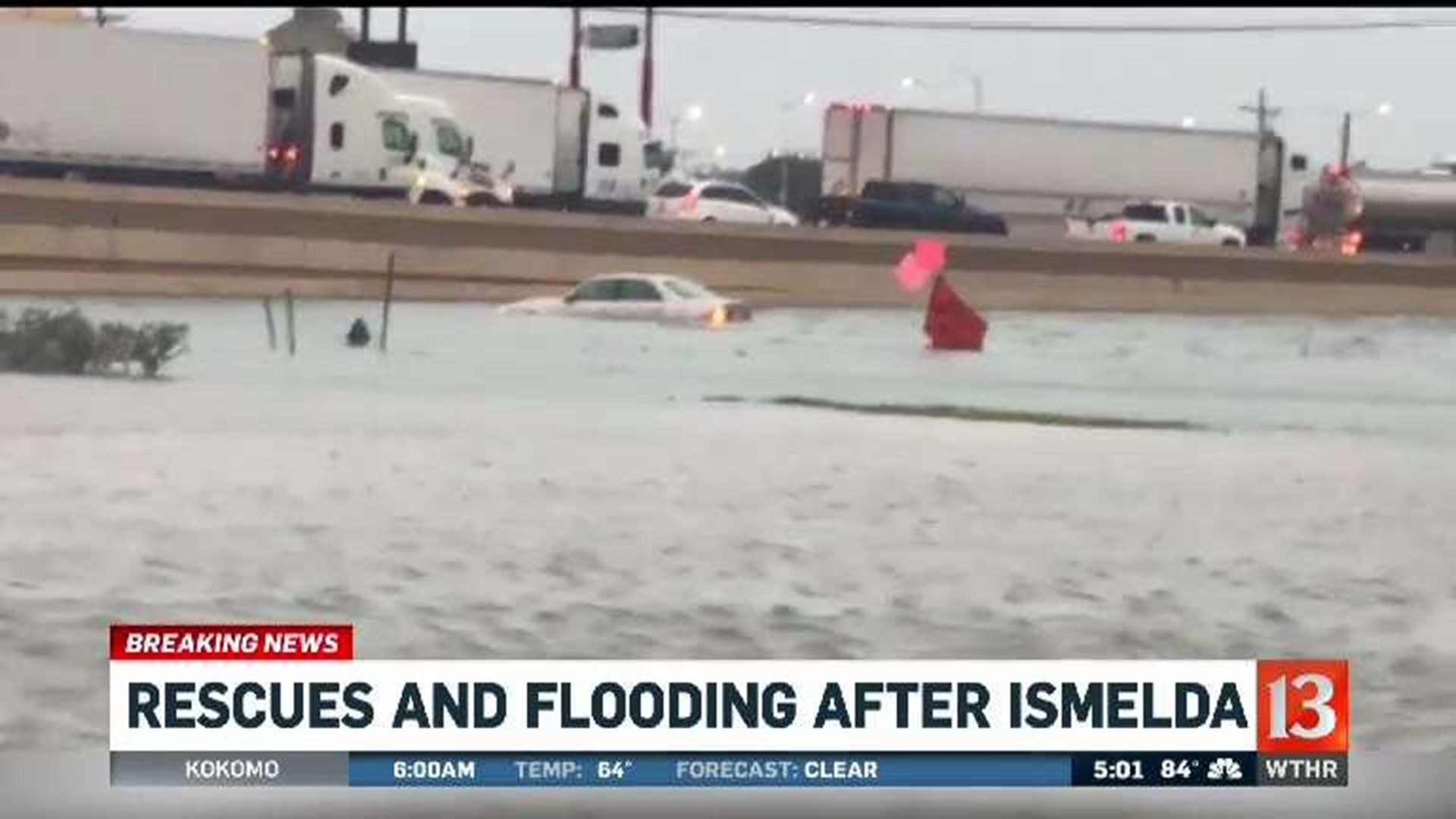 CHINA, Texas (AP) — The slow-churning remnants of Tropical Storm Imelda flooded parts of Texas on Thursday, leaving at least two people dead and rescue crews with boats scrambling to reach stranded drivers and families trapped in their homes during a relentless downpour that drew comparisons to Hurricane Harvey two years ago.

By Thursday night, floodwaters had started receding in most of the Houston area, said the city's mayor, Sylvester Turner. Law enforcement officers planned to work well into the night to clear freeways of vehicles stalled and abandoned because of flooding, Houston Police Chief Art Acevedo said.

Officials in Harris County, which includes Houston, said there had been a combination of at least 1,700 high-water rescues and evacuations to get people to shelter as the longevity and intensity of the rain quickly came to surprise even those who had been bracing for floods. The storm also flooded parts of southwestern Louisiana.

More than 900 flights were canceled or delayed in Houston. Further along the Texas Gulf Coast, authorities at one point warned that a levee could break near Beaumont in Jefferson County. During Harvey, Beaumont's only pump station was swamped by floodwaters, leaving residents without water service for more than a week.

Imelda's remnants Thursday led to the deaths of two men. Nineteen-year-old Hunter Morrison drowned and was electrocuted while trying to move his horse to safety, according to a message from his family shared by the Jefferson County Sheriff's Office. Crystal Holmes, a spokeswoman for the department, said the death occurred during a lightning storm.

Morrison's brother, Caleb, posted on Facebook describing what had happened. The post was then shared by the sheriff's office, according to KHOU:

"Hello everybody. Right now my family and I are going through one of the most horrific times in our lives with losing Hunter. Thank you for all the kind words and phone calls I have received over the past 8 hrs but I do want to clarify something...he wasn’t “saving” people. He was trying to move his horse, got electrocuted, and drowned. I wanted to make that known because I have had news people call me and want the story. I am not upset by any means but I just want the facts to be straight and not give him a sense of false heroism. Thank you for your kind words and if you hear the story being told wrong...please correct them. Thank you"

A man in his 40s or 50s drowned when he tried to drive a van through 8-foot-deep floodwaters near Bush Intercontinental Airport in Houston during the Thursday afternoon rush hour, Harris County Sheriff Ed Gonzalez said.

The National Weather Service said preliminary estimates suggested that Jefferson County was deluged with more than 40 inches (102 centimeters) of rain in a span of just 72 hours, which would make it the seventh wettest tropical cyclone in U.S. history.

Even when Houston was finally rid of the worst, downtown highways remained littered with abandoned cars submerged in water. Thousands of other drivers were at a practical standstill on narrowed lanes near flooded banks.

"The water kept rising. It kept rising. I couldn't believe it," said Ruby Trahan Robinson, 63. She uses a wheelchair and had a portable oxygen tank while getting settled into a shelter at City Hall in the small town of China, just outside Beaumont.

Turner evoked the memory of Harvey — which dumped more than 50 inches (127 centimeters) of rain on the nation's fourth-largest city in 2017 — while pleading with residents to stay put. City officials said they had received more than 1,500 high-water rescue calls to 911, most from drivers stuck on flooded roads, but authorities described a number of them as people who were inconvenienced and not in immediate danger.

Ahead of the evening rush hour, Houston officials urged commuters to stay in their offices for an extra three to four hours rather than embark on flooded and already jammed highways. Turner made a similar appeal to parents of schoolchildren as the Houston Independent School District — Texas' largest with more than 200,000 students — did not cancel classes or shorten the day unlike neighboring districts in the path of the storm. The district canceled Friday classes.

Imelda is the first named storm to impact the Houston area since Harvey hovered for days and inundated the flood-prone Gulf Coast. That storm dumped more than 5 feet (1.5 meters) of water near the Louisiana border, and two years later, it looked in some places like Harvey was playing out all over again.

Even as the intensity of the storm weakened, Harris County officials warned that some of their 4.7 million residents might not see high waters recede in their neighborhoods until the weekend.

In Winnie, a town of about 3,200 people 60 miles (95 kilometers) east of Houston, a hospital was evacuated. Chambers County Sheriff Brian Hawthorne said emergency workers completed more than 300 rescues overnight and some residents were up on their roofs because of rising floodwaters.

Albert Livings, 73, was rescued from his apartment and said at least half of the 116 units in his complex were flooded. Water started seeping into his place before sunrise.

"It came from the front door and it didn't stop rolling until it hit the back wall," Livings said.

Following Harvey, Texas Gov. Greg Abbott ordered a report warning that punishing storms would become more frequent because of a changing climate. Scientists say climate change is responsible for more intense and more frequent extreme weather such as storms, droughts, floods and fires, but without extensive study they cannot directly link a single weather event to the changing climate.

Climate change skepticism runs deep among Republican leaders in Texas, and Abbott has said it's "impossible" for him to say whether he believes manmade global warming is causing the kind of disasters the state is telling residents to get used to. Earlier this year, Abbott approved billions of new dollars to fortify the Texas coast and reduce catastrophic flooding.

The flooding from Imelda came as Hurricane Humberto blew off rooftops and toppled trees in the British Atlantic island of Bermuda, and Hurricane Jerry was expected to move to the northern Leeward Islands on Friday and north of Puerto Rico on Saturday.