From the ivy, planted by the late Bill Veeck from an idea taken from the Indy Indians old home on 16th street, to the green seats resembling a park atmosphere. 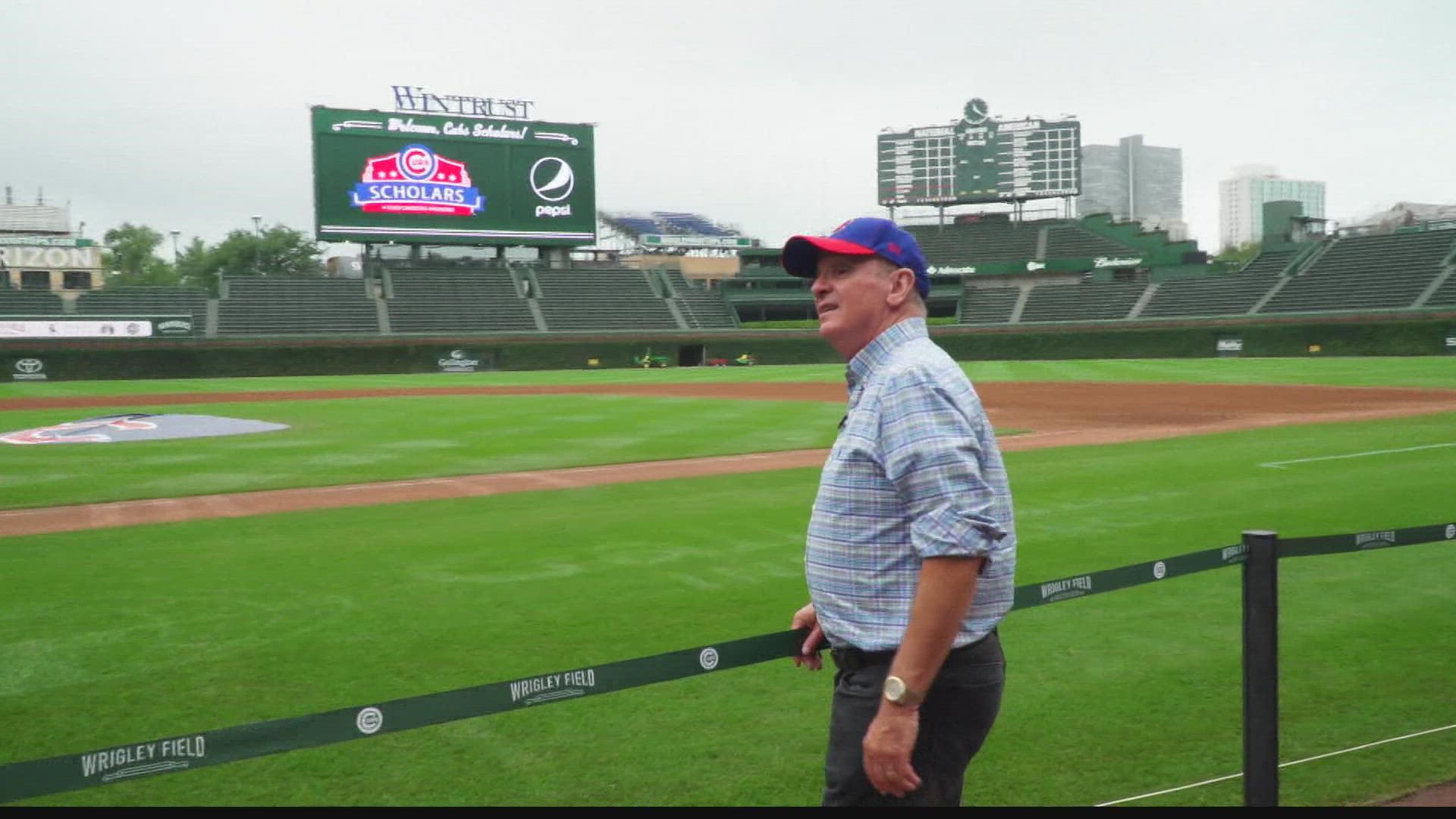 CHICAGO — For the latest Chuck's Big Adventure, we traveled to Chicago for a trip that took us to Wrigley Field, showed us super heroes and had us tasting the best pizza.

I grew up on the North Shore of Illinois, north of Chicago. My childhood memories always throw me back to riding my bike, playing on the beach, and cheering for my beloved Cubs. The payoff for years of suffering through many disappointing seasons came in November of 2016 when the Cubs won the World Series. I cried like a baby.

That win not only made people happy, but it brought the Cubs into a new season of existence and expansion. If you haven't been around the ballpark in a few years, you are in for a surprise. The neighborhood, usually quiet when the Cubs are on the road or off season is now prime for becoming a year-round dining and entertaining destination.

My crew and I were supposed to see a Cubs-Cardinals game, but it was rained out. Restaurants were still full, from the legendary Loukas family-owned Cubby Bear to new places that serve everything from Asian to Mexican to American bistro. The new Hotel Zachary, across the street from Wrigley Field is a quiet, classy respite dedicated to Zachary Taylor Davis, architect of the ballpark.

The next day we joined other Cub fans on a tour of the 100 plus year stadium. It's one of the many revenue streams the Cubs now have to make a dime or two but to also give fans a behind the scenes look at the park. I was thrilled. From seeing the ivy to sitting in the dugout to hearing a talk on the amazing history of the club, this was a bucket list venture.

Our guide, Brian Sellers, sat down and talked to me about the tour and the fact that you now need more than a good ball game to be successful in baseball. It's the reason Wrigley Field is modernized and why the tour exists.

"I think you have a different type of fan that comes to the game now, a fan that wants to be entertained, it’s more than just what’s on the field going on, they want that stimulation, you know, seeing stuff on the video boards and having places to visit around the neighborhood. I mean, the neighborhood really has seen just exponential change, not only that has been funded by the Ricketts family or the Cubs, but also by other private developers that put in beautiful condo buildings here on Addison Street, and a lot of businesses are going in. Because Addison Street was just an absolute eyesore and now you got a beautiful area,” Sellers said. “It just makes Wrigley Field even more inviting.”

1 / 9
WTHR
Chuck took a tour of Wrigley Field which gave him a chance to get down on the field.

For me, the tour brought me back to a time when I sat in the upper deck with my dad, cheering on the Cubs and making memories that are with me to this day. The subject of emotion and memories is not lost on Brian because he hears it every time he shows a guest the friendly confines of this historic ballpark.

I told Brian it seems like everybody's got a story, even the first timers who watched games with Harry Caray when he was on cable. He told me, “We have people that date back to the 40s, 50s and 60s that came in here and it’s like the ballpark has changed, but it hasn't changed. There is still that charm of the old ballpark that is encompassed, and the ballpark has seen a ton of renovation, but it is still Wrigley Field."

The charm is still there. From the ivy, planted by the late Bill Veeck from an idea taken from the Indy Indians old home on 16th street, to the green seats resembling a park atmosphere. From the statue of Mr. Cub in front of the park, to the look of wonder in a child’s eye when they see the field for the first time. Wrigley Field isn't just the home of the Cubs, it's the home of a generation of memories and good feelings.

Wrigleyville doesn’t really exist. It’s a brand, a name, a marketing tool for the businesses in this part of the Lakeview neighborhood of Chicago and it works.

Since the Ricketts family took over ownership of the Chicago Cubs, a lot has changed. Wrigley Field has been upgraded to be more modern. There are more suites, more gathering places, more amenities to the 107-year-old park. The fine line is there between updating the historic park and keeping its iconic charm.

Unlike many people my age, I like most of the changes to the area. I had envied the folks in St. Louis who had the Ballpark Village and could park their cars and enjoy a nice dinner and shopping with a few hotels right across the street. The Cubs now have that in Gallagher Way and the surrounding neighborhood. You can spend the night across the street, have breakfast, do some shopping, go to the game and have a nice dinner before heading home.

One of my lifetime thrills happened when Cubs executive Joe Rios arranged to have “Welcome Chuck’s Big Adventure” on the world-famous Wrigley Field marquee. All in all, Wrigleyville is more a state of mind than a place, but I’ll take it, even if the Cubs get rained out!