According to IMPD, two suspects ran away from the crash but are now in custody. 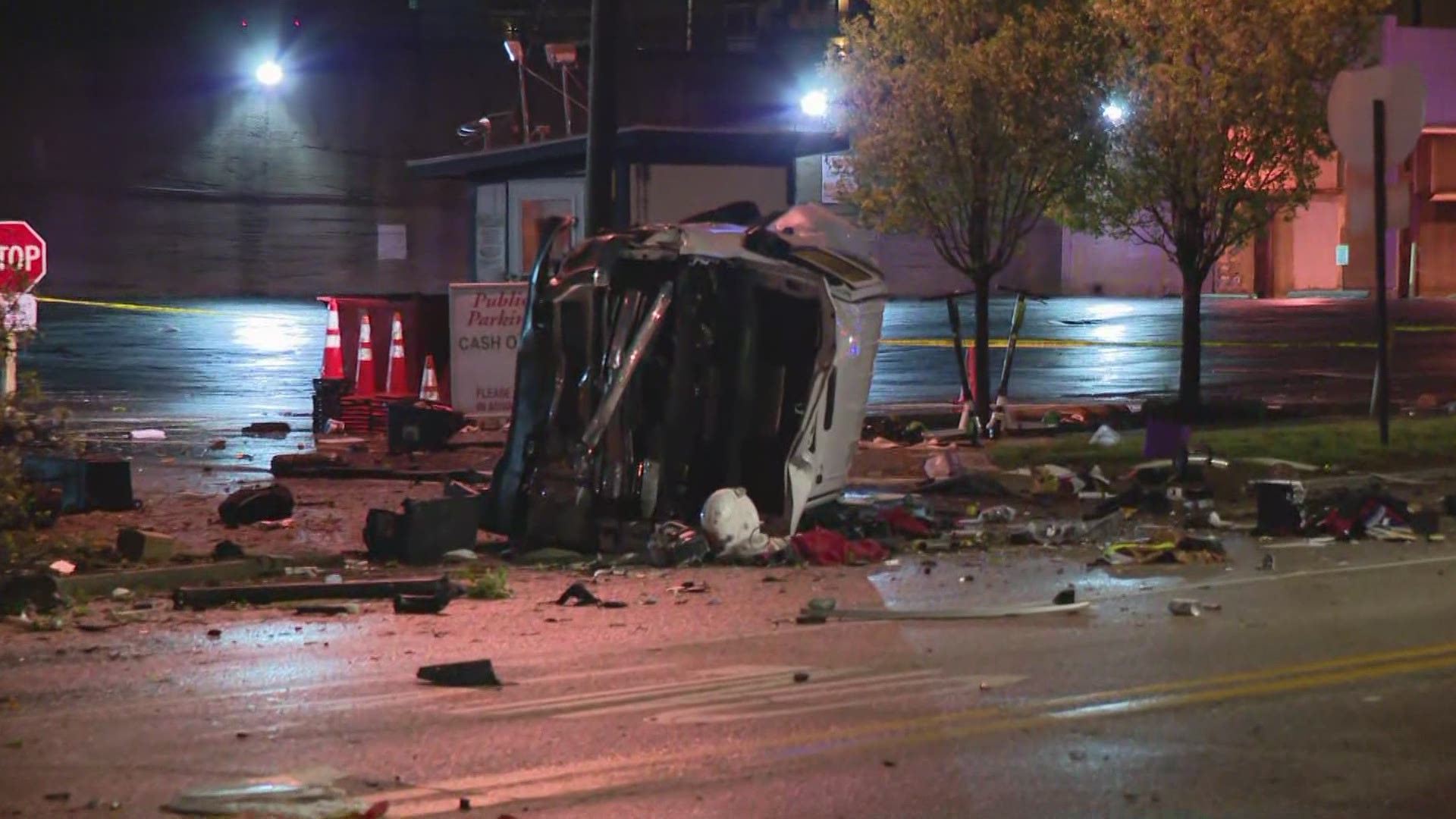 Police spotted the white 2018 Chevy Silverado just after 9:00 p.m. Sunday night near the intersection of Holt Road and Washington Street on the near westside. The truck had been reported stolen and police believe it may have been used in other trailer thefts. When an officer tried to pull over the truck, the driver fled south on Holt Road.

The truck entered Interstate 70 westbound going the wrong way. Police ended the pursuit at that point.

Credit: Jim Johnston/WTHR
A chase led to a serious crash on South Street between Pennsylvania and Meridian.

The truck and trailer sideswiped at least three vehicles on the interstate before exiting into downtown at West Street. The truck may have hit two more vehicles before turning east on South Street.

Police believe the truck ran a red light at Meridian Street and hit a 2015 silver Hyundai traveling northbound and attempting to turn left onto South Street, and also hitting a gray Lincoln MKX SUV traveling north in the right-hand lane. The collision caused the trailer to rotate and hit the Hyundai. The collision with the Lincoln caused the SUV to flip and roll onto the passenger side. The truck landed on its side while the trailer hit trees on the side of the street and shattered into pieces. Debris was spread for half a block in the street and along the sidewalk.

The man driving the Silverado, Clint Adams, and a female passenger, Amanda Watts, got out of the truck and tried to run but were caught and arrested within a few minutes. Adams was arrested for DUI. Watts was held on an unrelated arrest warrant.

Rescuers had to cut a woman from the Lincoln. She was with her husband, an off-duty Southport police officer. Both had injuries described as serious, but they were awake and alert when transported to a hospital.

“This vehicle, or one like it, has been suspected in a couple trailer thefts,” said Kerry Buckner, IMPD night watch commander. “When we had the Final Four here, somebody tried to stop it before and it fled, going the wrong way and we had to terminate it again. I think it figured out if we go the wrong way on the interstate, the police will quit chasing us. Unfortunately, tonight it hit some innocent civilians, which is always a bad thing.”

Buckner stressed that IMPD ended the pursuit when the truck got on the interstate, but the driver continued at high speeds into the downtown area.

“Pursuits are a double-edge sword,” Buckner said. “If you don’t chase them, it just keeps up. But if you chase them and something happens like this, it’s bad. It’s bad either way. These people were just minding their own business, having a good time downtown, and got hit by somebody that was running for no obvious reason other than property theft.”

The crash was cleared and streets reopened early Monday morning.