Before Riley Walker takes to the wrestling mat in the Speedway High School wrestling room, the 16-year-old sophomore takes off his leg. 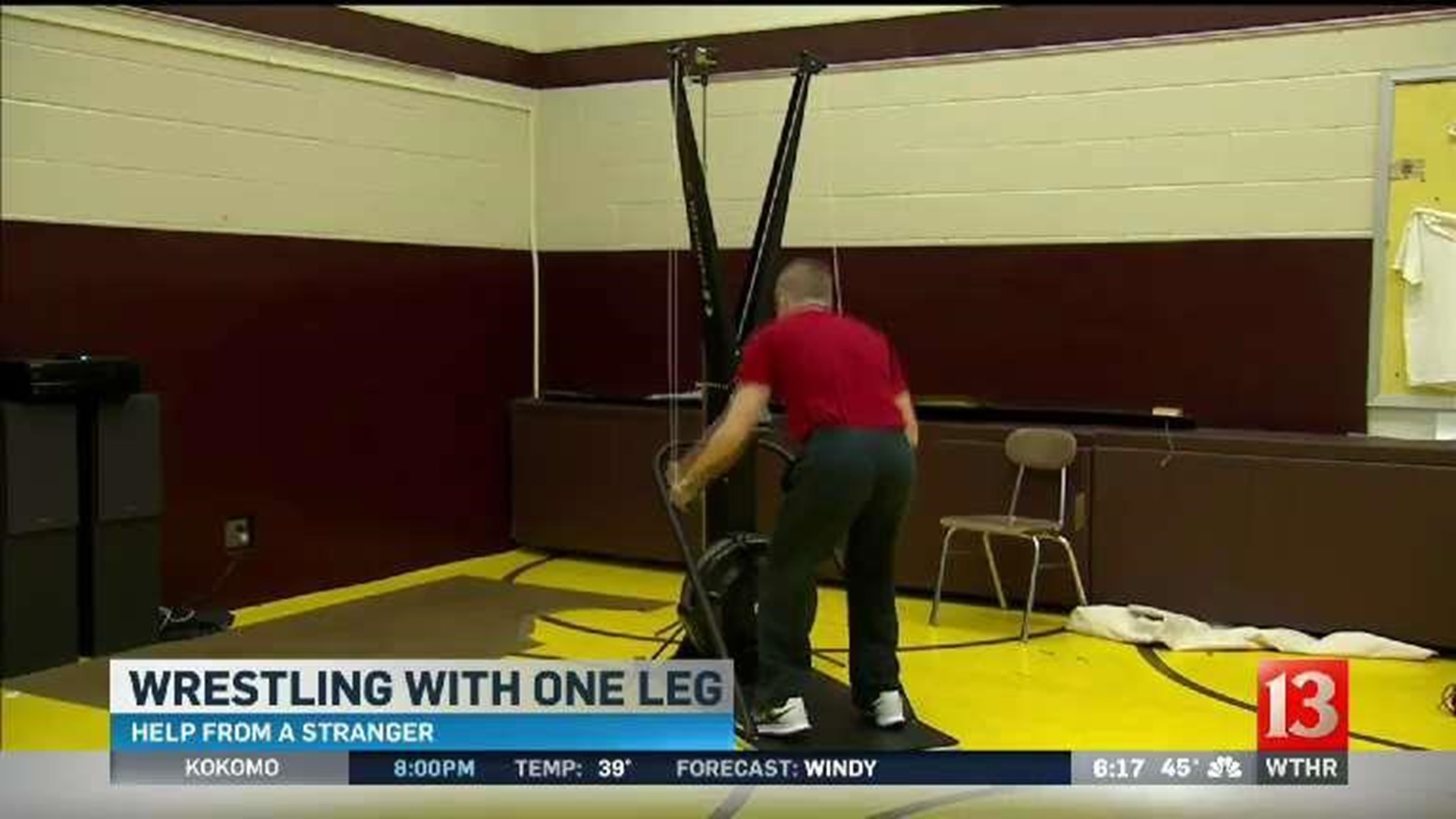 SPEEDWAY, Ind. (WTHR) - Before Riley Walker takes to the wrestling mat in the Speedway High School wrestling room, the 16-year-old sophomore takes off his leg. Walker’s left leg is amputated below the knee. He wears a prosthetic lower leg, but not while wrestling.

“I can't move very well with my leg on,” said Walker before a recent practice, “so it's actually beneficial to me to wrestle without my leg on because I feel like I'm faster and can move better. Wrestling was the thing that was great for me because I don't have any limitations when I'm out there wrestling. I'm never going to have to come out because my leg is falling off.”

Walker has won about half his matches this season in the 145 pound weight class.

"Don't look at him as a one legged wrestler,” said Jacob Beyer, Speedway wrestling coach. “Look at him as just a normal wrestler that will more than likely work harder than everybody else."

“Most kids wouldn't even dare to come out on the mat and wrestle,” said teammate Jaden Powell, Speedway’s state-ranked heavyweight, “but a kid like Riley is very self-determined and he'll do anything to deserve a spot on the team. He's done that and I'm very proud of him."

Walker started wrestling as an eighth grader, not too long after his left leg was amputated. He was born with fibular hemimelia, a birth defect where part or all of the fibular bone is missing. He also had ankle problems and club feet. More than a dozen major surgeries could not save his lower left leg. His right leg is stable for now.

Now Walker pushes his cardio endurance on a brand new Ski Erg, a skiing exercise machine. A total stranger bought and donated the $1,000 equipment over Christmas break. Diane Phillips read about Riley and his cardio challenge. She uses a Ski Erg herself and believed the machine could benefit Walker.

“There are very nice people out there who are willing to help other people out that they don't even know and have nothing to do with them,” said Walker. “I don't think she's related to wrestling or anything whatsoever. It kind of blew my mind."

“So many of us who don't have additional limitations on ourselves, we place limitations on ourselves,” said Phillips, who works at Eli Lilly. “So here's a guy who has what we would see as limitations and has such a positive attitude about life and maximizing what he can accomplish. I was really impressed with his work ethic and to see that this is something that's going to benefit him, and I think it's something that would benefit other athletes as well who have different physical challenges. Other athletes at the school could use it if they have knee surgeries and can't run.”

"I like putting on two or three sweatshirts and my t-shirt and come over here and sweat out a couple pounds after practice, so I can go home and eat some stuff that I probably shouldn't be eating,” Walker told Phillips with a chuckle as she watched him use the skiing machine. “I've tried elliptical and exercise bikes and everything. They don't work very well for me. It was great to find something that exhausts all my muscles. It is a great workout and I don't have to move my lower body much.”

Back on the wrestling mat, the biggest difference for Walker is starting the match on his knees while his opponent is standing.

“It's hard for me to pin people due to leverage problems and getting to different angles,” said Walker. “So my wrestling matches usually go the full three rounds. So I have to be able to last. My strategy is to make whoever I'm wrestling come down to my level, get the first takedown, get hold of their leg, get around them, and then just basically hold them down for the rest of the match."

“Don't underestimate him,” said Powell. “He's very strong, seriously. His arm length is like crazy. Watch out for him. He's very quick. He's very quick with his hands and he will make you look dumbfounded if he has your face on the mat.”

Walker wrestles with humility, not realizing just how inspiring he already is.

“I'd like to be able to achieve more in wrestling and sports and life basically to become more of an inspiration, because I think somebody who is an inspiration has achieved things and has things that people aspire to,” said Walker. “I don't know if I've reached that point yet.