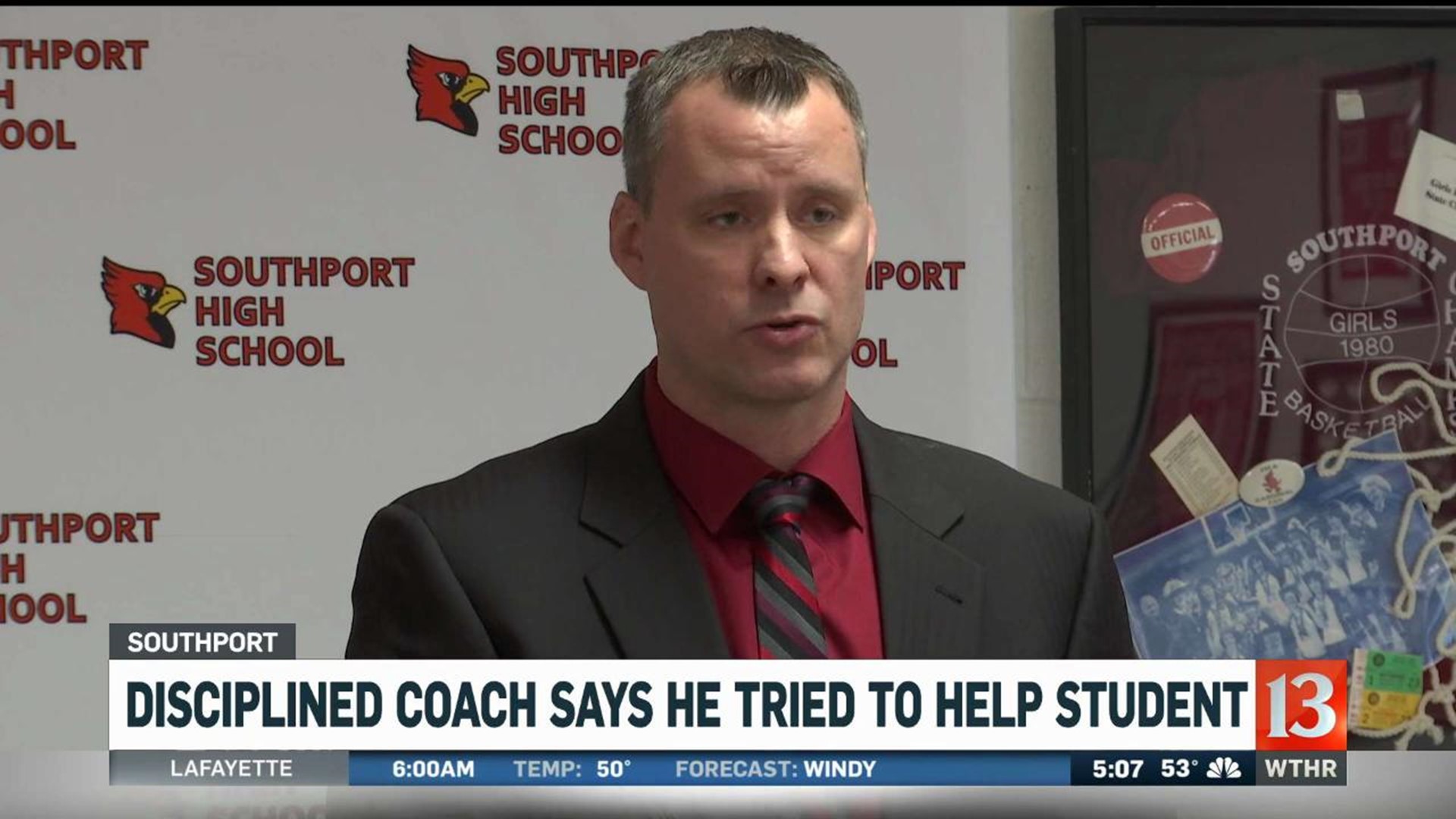 Brand signed the check for $5,548 from the Southport Basketball Boosters to pay non-resident tuition for 6’6” 15-year-old freshman Nickens Paul Lemba, who is from the Congo.

"This was all about me trying to protect a young man, give him a stable environment,” Brand said Tuesday at a news conference at Southport Fieldhouse.

School officials say Lemba was abandoned in their district by a previous guardian and was in crisis. Coach Brand stepped in to find a new guardian.

"I honestly did not know what I was doing was wrong,” said Brand. “I was transparent with my superiors the whole time. I felt like if I raised the money and the fact that this young man could not this year play varsity basketball, I still don't understand why we're being punished."

"Coach Brand would not benefit as a varsity basketball coach because this student athlete was never going to impact his varsity team," said Perry Township Schools Assistant Superintendent Robert Bohannon, the district’s designated immigration liaison with the U.S. Immigration Authority. "Even if it wasn't done correctly, it was done for the right reasons,” said Brand. “All my young men, they didn't benefit from the student being here and they wouldn't have benefited from the student athlete being here all year. So, I still don't understand why they are being punished."

The school suspended Brand for the first two games of the upcoming season. Punishment for coaches is up to the school system. But IHSAA Commissioner Bobby Cox said last week that the two-game suspension “falls woefully short” of expectations.

"I can't imagine allowing a basketball coach to continue by violating a rule of this magnitude,” said Cox. “Had it been my situation, had it been my call, I’d have fired the coach."

The IHSAA banned Southport from the 2020 state tournament and placed the entire athletic department on probation for a year. Lemba is ineligible to play for any IHSAA school during the 2019-20 school year.

Lemba came to Indiana this summer to play basketball and earn a college scholarship. Several major programs are already interested in his talents which were on display during AAU games.

"The kid, all he knows is basketball,” said Jake Hinson, who coached Lemba in AAU. “That’s his way of communication right now. That’s been taken from him due to the adults in a school system that’s unwilling to take measures necessary for the coach that’s involved in this." Brand is in his second season coaching at Southport. The Cardinals open their season tonight at Perry Meridian.

“I do feel badly for those seniors at Southport that this was their senior year and they’re not going to get to play in the tournament,” said Cox. “But the only people they can turn to, they need to look at their own coach and their own school administration, because they had an opportunity here to make this work a little differently than it came out.”

The IHSAA has received the appeal from Perry Township Schools through their legal counsel. The IHSAA review committee will hear the appeal on December 4, 2019 at 2:00 p.m. at the IHSAA office in Indianapolis.