Indianapolis recovered a fumble in the end zone to secure the win and move to 10-4 on the season. 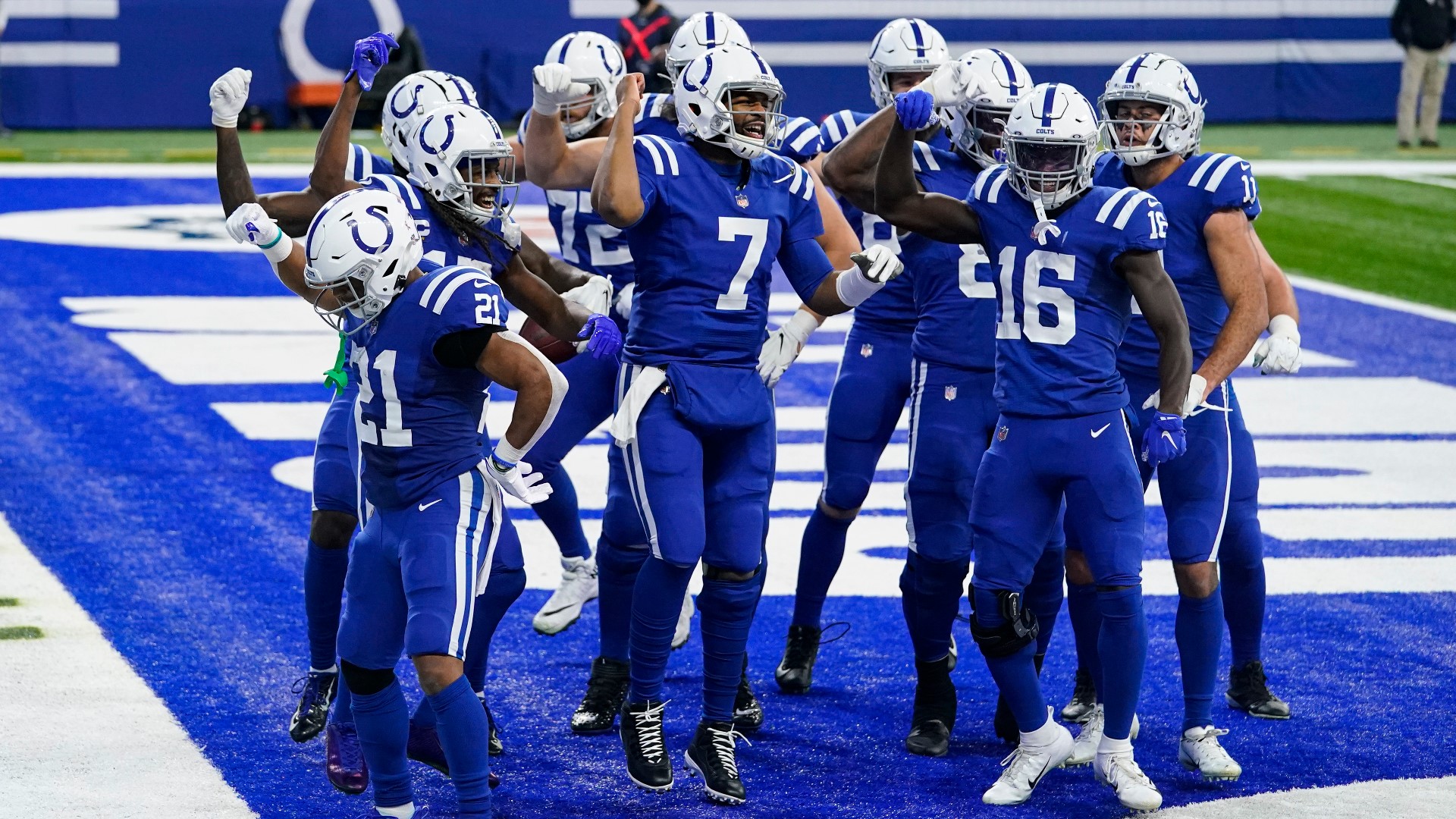 INDIANAPOLIS — Philip Rivers found Zach Pascal for a tiebreaking TD pass with 1:47 left and the Colts defense recovered a fumble in the end zone with 19 seconds remaining to seal a 27-20 victory over Houston.

It was almost the exact same scenario that played out when these teams met two weeks ago. Indy jumped on a bad snap to Texans quarterback Deshaun Watson to win that one.

Indy has now won three straight overall and remains tied atop the AFC South. Houston has lost three in a row.

4:03 p.m. - The Colts win allows them to keep pace with the Tennessee Titans for first place in the AFC South. Tennessee beat Detroit 46-25 Sunday to also move to 10-4 on the season.

The teams split their season series, but the Titans hold an advantage in the first tiebreaker, with a 4-1 record against AFC South opponents, compared to the Colts' 3-2 mark. Divisional record is the second tiebreaker to crown the AFC South champion.

Each team has one game left against an AFC South opponent. Indianapolis finishes the season at home against Jacksonville, while Tennessee will travel to Houston to play the Texans in Week 17.

Next week, the Colts are in Pittsburgh to face the Steelers, while the Titans are in Green Bay for a Sunday night game against the Packers.

In other games that could impact the Colts' playoff picture Sunday, Miami defeated New England and Baltimore routed Jacksonville. Cleveland, who is also looking to improve to 10-4, plays the New York Giants Sunday night on Channel 13.

Philip Rivers completed 22 of 28 passes for 228 yards and two touchdowns, both to Zach Pascal, who had 79 yards receiving on five catches. Jonathan Taylor ran for 83 yards and a touchdown for Indianapolis.

3:43 p.m. - Houston starts what will likely be their final drive from their own 25-yard line following a touchback.

Deshaun Watson threw incomplete on first down with 1:44 remaining, then ran near the first down marker on second down. A personal foul on Xavier Rhodes for a controversial late hit out of bounds moved the ball to the Texans 49-yard line with 1:35 left.

On first down at the Colts' 20-yard line, DeForest Buckner sacked for a third time and a six-yard loss with 56 seconds remaining. A false start on Houston moved it back five more yards, setting up second-and-21 for the Texans.

A pair of completions by Watson gained 16 yards to set up fourth and 5.

On fourth down, Keke Coutee caught a pass inside the five, but Darius Leonard knocked the ball loose near the goal line. Bobby Okereke recovered the fumble in the end zone for a touchback to seal the Colts win.

THE DEFENSE DID IT AGAIN!!!

THE MANIAC SAID NO. 😈

3:35 p.m. - Jonathan Taylor lost two yards on first down and Houston called their first timeout of the second half with 1:49 remaining.

After the timeout, Rivers found Zach Pascal, who dove over the pylon as he was hit for a touchdown and a 27-20 Indianapolis lead with 1:47 remaining.

Back in front. @ZachPascal6 with his second TD of the day!

3:32 p.m. - Philip Rivers took a deep shot on second-and-20 from the 45-yard line, finding T.Y. Hilton down the middle of the field, setting Indianapolis up with first and goal at the 3-yard line after the 41-yard completion.

The two-minute warning came before Indianapolis could run another play in the 20-20 game.

3:29 p.m. - Philip Rivers drove the Colts into Texans territory, then Jacoby Brissett came on to pick up a big fourth down conversion at the 35-yard line with 2:34 remaining.

3:15 p.m. - Deshaun Watson used his legs to pick up a fourth-and-1 near midfield to extend the ensuing drive for the Texans.

The next play, Watson found tight end Kahale Warring on a deep pass to the Colts' 30-yard line.

Watson finished the drive off with a nine-yard touchdown pass to Keke Coutee, which tied the score at 20-20 midway through the final quarter.

A career-high 27th TD pass of the season for @deshaunwatson and we’ve got a tie game in Indy! #WeAreTexans

3:09 p.m. - Rodrigo Blankenship kicked a career-long 53-yard field goal to give Indianapolis a 20-13 lead early in the fourth quarter.

3:04 p.m. - The Colts will head to the fourth quarter with the lead and some momentum after a 24-yard pass to Zach Pascal and an 11-yard run by Nyheim Hines to set them up with a first down at the Texans' 40-yard line and a 17-13 lead.

2:59 p.m. - The Texans appeared to get a first down inside the Colts' 10-yard line, but coach Frank Reich challenged the play and it was upheld, setting Houston up with third down and less than a yard inside the 7.

After a false start penalty, the Colts defense stuffed running back David Johnson on a pass from Deshaun Watson, forcing a field goal attempt.

2:37 p.m. - Jonathan Taylor picked up where he left off in the first half.

The Colts received the second half kickoff and Taylor picked up 28 yards on four carries, including a key third-down pickup near midfield.

Rodrigo Blankenship came on to kick a 35-yard field goal to push the Colts lead back to seven at 17-10 with 8:27 left in the third quarter.

2:19 p.m. - The Texans drove to the Indianapolis 5-yard line, but the Colts defense held and forced a field goal at the end of the half.

2:08 p.m. - After an incomplete pass to tight end Trey Burton, Houston takes over possession at their own 19-yard line with 1:43 remaining in the half. The Texans still have all three of their timeouts, as do the Colts.

2:05 p.m. - The Colts are facing a third-and-6 from their own 34-yard line when the game resumes after the two-minute warning in the first half.

1:59 p.m. - Houston cut the Colts lead in half on a 38-yard touchdown pass from Deshaun Watson to Chad Hansen late in the second quarter.

Hansen ran a crossing route and was wide open down the left sideline for the score to bring the Texans within 14-7 with 3:46 to play in the half.

1:50 p.m. - The Colts were finally stopped by the Texans defense, bringing Rigoberto Sanchez on to punt from the Indianapolis 35. His 44-yard punt was fair caught at the Houston 21-yard line.

Sanchez is playing in his first game in nearly three weeks after surgery to remove a cancerous tumor.

1:46 p.m. - The Texans moved the ball just across midfield, but the Colts defense forced another punt, taking over at their own 9-yard line following a punt.

1:30 p.m. - Indianapolis wasted no time getting back in the end zone.

Philip Rivers completed three passes in the four-play drive, including a pair to Zach Pascal for 26 and 11 yards and a touchdown for a 14-0 lead.

Let's do that dance again, shall we? 🙌@BudLight | #BudLightCelly

Pascal has three catches for 50 yards late in the first quarter.

1:25 p.m. - The Colts defense again allowed a single first down before stopping the Texans offense. DeForest Buckner again hit Deshaun Watson, who lost the ball as he fell to the ground. Justin Houston recovered the fumble, setting the Colts up in Houston territory.

1:16 p.m. - The Colts get on the board first with an 81-yard touchdown drive capped off by a 5-yard touchdown run by Jonathan Taylor to take a 7-0 lead.

Taylor ran for 24 yards and caught a 7-yard pass on the drive and Philip Rivers was 4-of-5 passing for 34 yards, including two completions to tight end Jack Doyle. Nyheim Hines had a 23-yard run deep into Houston territory.

1:10 p.m. - Indianapolis started their first series on offense at their own 19-yard line after a Nyheim Hines punt return.

1:05 p.m. - The Colts will go on defense to start the game, kicking off to the Texans to open the contest.

After Houston picked up a first down, DeForest Buckner tripped up Deshaun Watson on third-and-2 to force a punt.

12:50 p.m. - Mo-Alie Cox, Anthony Castonzo and DeForest Buckner, who had all been listed as questionable on the Colts latest injury report, are active for Sunday's game. Punter Rigoberto Sanchez also returns after missing two games following surgery to remove a cancerous tumor.

The Texans will be without running backs Duke Johnson and C.J. Prosise for the contest.