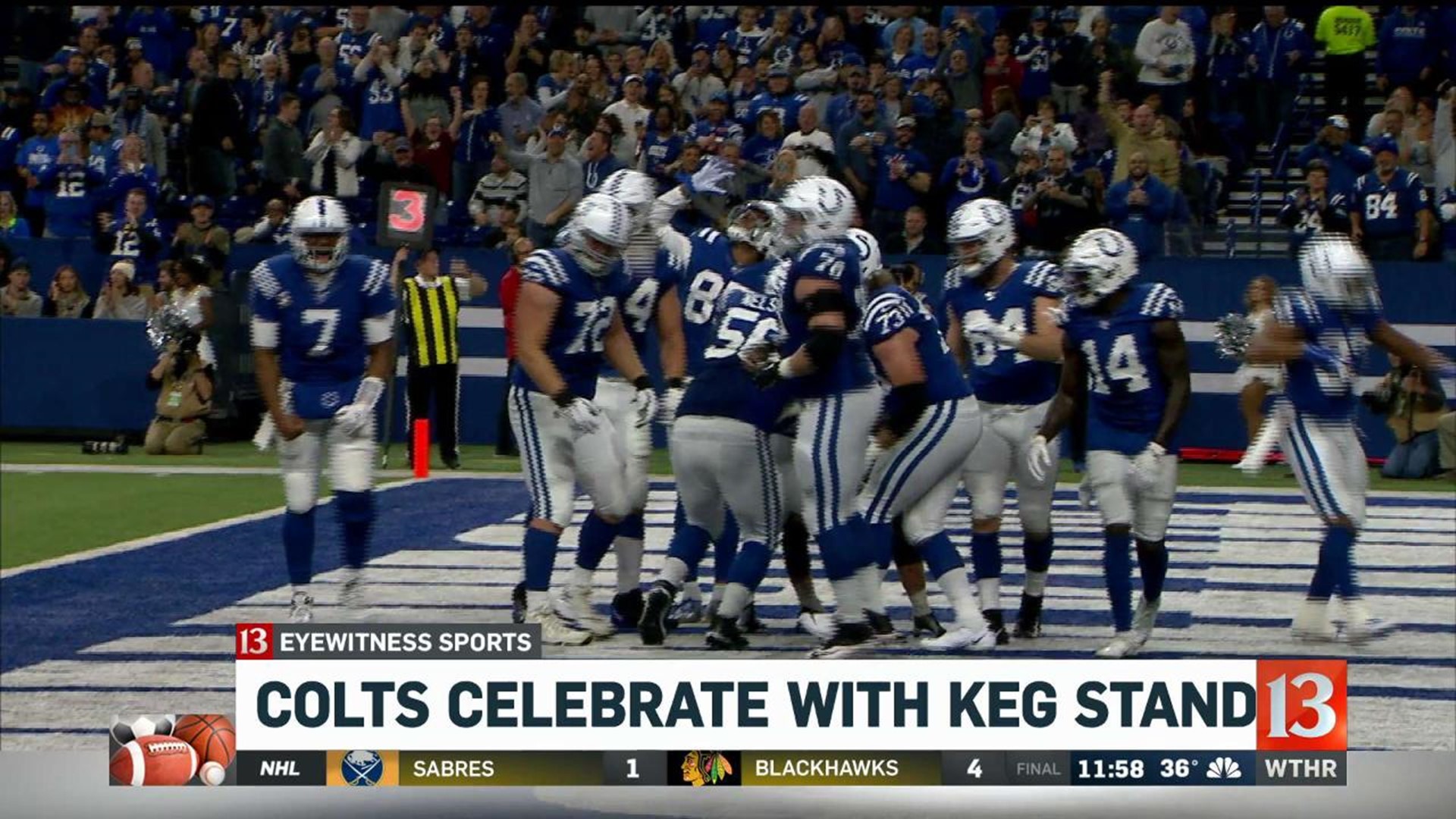 INDIANAPOLIS (WTHR) — The Indianapolis Colts took on the Jaguars at home Nov. 17, 2019.

4:02 p.m. — Colts win 33-13 and are tied with the Houston Texans for first in the AFC South. The Colts play Houston on Thursday.

It would be a shame if someone stole it. #JAXvsIND pic.twitter.com/R41vUNGNeP

3:48 p.m. — There was a lot of contact as Brissett tried to hit Zach Pascal and the Jaguars intercept at the 10.

3:41 p.m. — Jaguars offense makes some ground, but the Colts defense is able to hold them and force a punt. Colts get it on their own 13.

3:26 p.m. — Colts defense is able to hold the Jaguars who are forced to kick the field goal and miss. Colts still lead 24-7.

3:01 p.m. — The Jaguars pick up a first down and save their defense from heading back out onto the field.

RB Marlon Mack ruled OUT for the rest of the game with a hand injury.

He was rolling with 109 yards rushing and a TD. Now it’s up to Nyheim Hines and Jonathan Williams to carry the load.

The worst part about Quenton Nelson’s touchdown not being a touchdown is the fact that he wasted a perfectly good keg stand celebration.

2:51 p.m. — Third and goal from the 1 and the Colts Offensive Guard Quenton Nelson is able to push it in for a touchdown. It is being reviewed to see if he did get it across.

2:49 p.m. — The running game is working for the Colts as Marlon Mack takes it inside the Jaguars 10.

2:47 p.m. — Jonathan Williams takes it 31 yards to get the Colts a much needed first down.

Rock Ya-Sin will be keeping that ball.

2:12 p.m. — Colts manage to get a first down right before the two-minute warning.

2:11 p.m. — Brissett dodges a series of tackles to pick up several and make it 3rd and short.

1:51 p.m. — Adam Vinatieri is called out and puts it right through the center of the uprights for a 34-yard field goal. Colts lead the Jaguars 10-7.

1:48 p.m. — Brissett throws it towards the sideline under pressure and somehow Eric Ebron pulls it in for a first down.

1:40 p.m. — Leonard Fournette pushes the pack forward to pick up a first down for the Jaguars.

1:31: p.m. — Marlon Mack keeps spinning through the Jaguars defense and takes it in to put the Colts on the board. Vinatieri knocks down the extra point to tie things up 7-7.

Marlon Mack should save that one for his highlight reel. Spins off 2 defenders to score the 13-yard TD. #Colts and #DUUUVAL knotted at 7.
pic.twitter.com/CZIZwTmGlS

1:30 p.m. — Brissett connects with Chester Rogers to put the Colts inside the Jaguars 20.

1:28 p.m. — Brissett completes his first pass of the game for a first down.

1:18 p.m. — The Jaguars convert on third down to get into Colts territory.

With that sack, @JoshAllen41_ ties the franchise rookie sack record with 8.#DUUUVAL pic.twitter.com/Gh0QQPt1IU

1:04 p.m. — The Jacksonville Jaguars pick up 11 for a first down on their first play of the game.

12:43 — We are just minutes away from kickoff and the Colts are ready to go.

No yelling. No screaming.

12:10 p.m. — Quarterback Jacoby Brissett is suited up and ready to go.

QB1 back in uniform. @JBrissett12 is happy to get back at it after an unwanted two week break. #Colts @WTHRcom pic.twitter.com/nA4Dyvz2VR

12:00 p.m. — Jaguars are still without Josh Dobbs and several other players for today's game.

The following players are inactive today against the Colts ⤵️ pic.twitter.com/mc63ODOV6m