Game blog: Colts make the playoffs with 28-14 win over Jaguars

The Colts took full advantage by scoring the first 20 points against the reeling Jaguars. 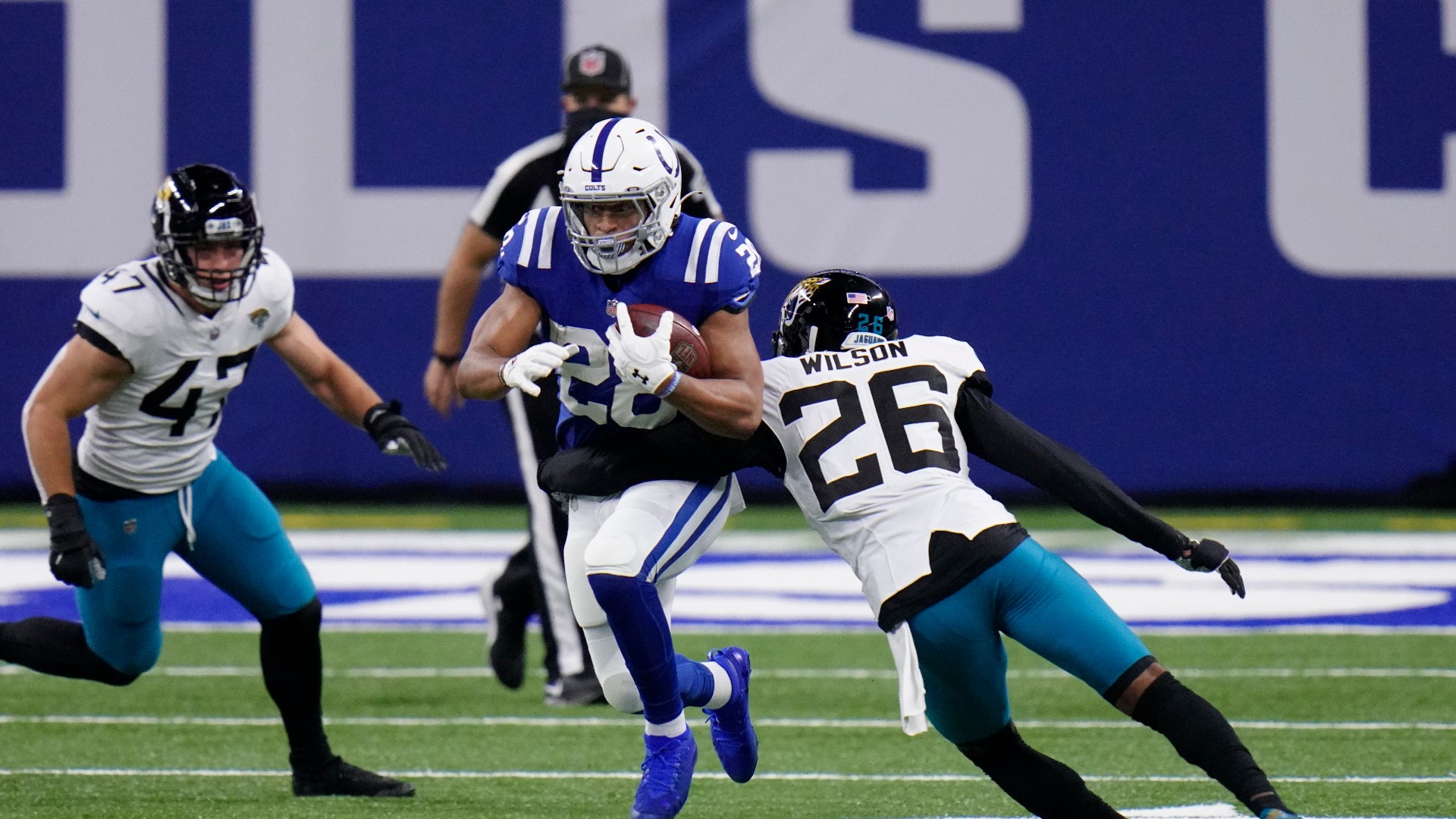 INDIANAPOLIS — The NFL announced that the Colts will play at 1:05 p.m. Saturday, Jan. 9 in Buffalo for the Wild Card round of the playoffs.

Jonathan Taylor rushed for a franchise-record 253 yards and two scores, Philip Rivers threw for another touchdown and the Indianapolis Colts clinched a playoff spot with a 28-14 victory over Jacksonville.

Indy started Sunday needing one of Baltimore, Cleveland, Miami or Tennessee to lose to have a chance at earning one of seven spots in the AFC field. The door opened when Buffalo blew out the Dolphins 56-26, and the Colts took full advantage by scoring the first 20 points against the reeling Jaguars before closing it out with Taylor's 45-yard TD run with 3:35 to play.

Jonathan Taylor—30 carries, 253 yards. Breaks franchise record for rushing yards in a single game (Edgerrin James had 219). 1,000 yard season for the rookie. A beast with a bright future.

This is great. Game is over at Lucas Oil but #Colts are staying put to watch the end of this Titans-Texans game. You can hear the cheers when Ka’imi Fairbairn just hit the game-tying field goal.

I literally sent a text in the last 60 seconds telling @calabro13sports and @TaylorTannebaum I was starting breathing exercises to get me thru this #Colts game, then Jonathan Taylor went and did Jonathan Taylor things. Horsies have some insurance. @WTHRcom

We have a ballgame again @LucasOilStadium

The #Colts w a solid first half. 20-7 and they get the ball to start the 2nd half. @WTHRcom

5:43 p.m. - Jaugars finally on the board just before the end of the first half.

The rookie puts points on the board!

Jacksonville players seem to have their minds elsewhere...like the offseason! No competitive fire so far

3 possessions and 3 scores. Taylor already has 120 rushing yards. The #Colts rolling 17-0 In the first half. @WTHRcom

Indianapolis has outscored opponents 146-130 in the second quarter this season.

4:18 p.m. - Buffalo Bills beat the Dolphins. Now, all the Colts need is beat the Jaguars.

Send your love to the @Buffalobills, #Colts fans.

Bills beat the Dolphins so allll the Colts need to do now is beat the Jags and they’re in.

Also keep an 👀 on the Titans-Texans game. Titans lose and Colts claim the AFC South. But again, they must win.

3:38 p.m. - 13News Sports' Dave Calabro and Taylor Tannebaum are at Lucas Oil Stadium ahead of the Colts home game against the Jacksonville Jaguars.

The Colts need a win today for a playoff spot.

Indianapolis Colts Frank Reich made one thing perfectly clear this week. No scoreboard watching allowed inside Lucas Oil Stadium. Instead he wants the Colts focused solely on beating Jacksonville — and letting the playoff picture take care of itself. Reich and general manager Chris Ballard have decided not to run scores of the four games that could impact their playoff hopes on the scoreboards Sunday. The Jaguars already have locked up the No. 1 overall draft pick and could be in for a major offseason overhaul.