NFL rushing leader Derrick Henry ran for 140 yards and three touchdowns in the first half and finished with 178 yards in the Titans' victory. 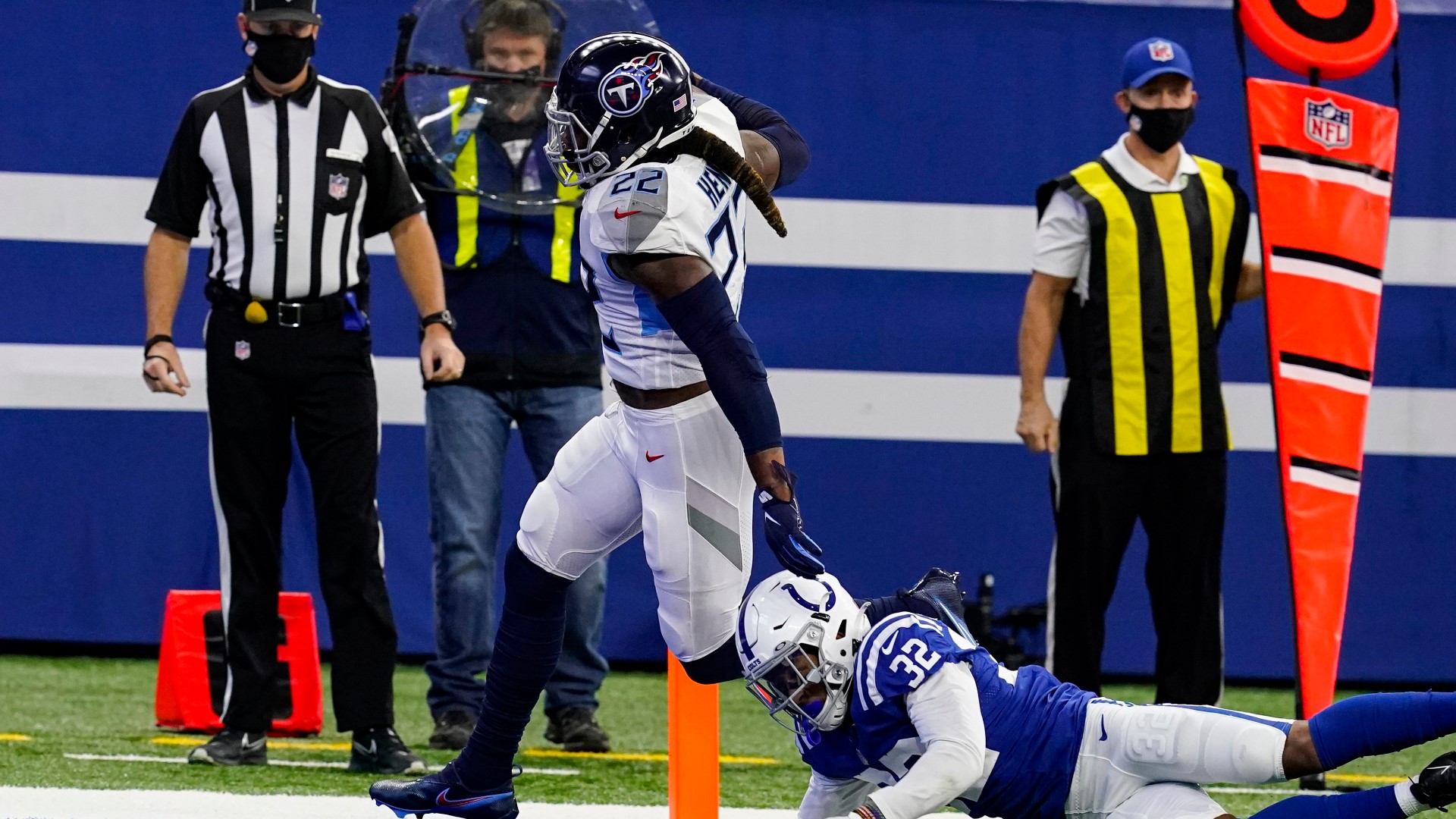 NFL rushing leader Derrick Henry ran for 140 yards and three touchdowns in the first half and finished with 178 yards in leading the Tennessee Titans to a 45-26 victory at Indianapolis.

The win breaks a tie atop the AFC South and gives the Titans a split in the two-game series. They have a tie-breaking advantage based on current division records.

Henry scored on runs of 12, 1 and 11 yards and served as a decoy on Ryan Tannehill's 1-yard TD run that gave Tennessee an insurmountable 35-14 halftime lead.

A disappointing home game for the Colts who are now 7-4 after falling to the Titans 45-26.

Losing by 19 at home in a game that would have given you a 2 game lead in the AFC South???? Ouch. The #Colts don’t have the roster depth they thought they had. @WTHRcom see you at 6

As exciting and encouraging as the TNF win was, today’s 45-28 loss at home is just as disappointing and ugly.#Titans manhandled the #Colts. No answer for Henry. Offense stagnant. 5 games left, there’s really no room for error down the stretch.

3:45 p.m. - T.Y. Hilton with the 50-yard reception. Still, no touchdown though. It does set up ANOTHER Jacoby Brissett rushing TD. That’s two now on the day for the backup quarterback.

Can the #Colts come back?

3:30 p.m. - Titans up 38-14 at the top of the third quarter. Colts defense has been better in the second half but it's still not looking good.

#Colts defense has been better in the 2nd half. But #Titans still averaging 6+ yards per run.

2:47 p.m. - Not something you typically see at a football game - a wedding at halftime!

Gift!! The Titans just dropped a pick six. Holy smokes, this game is getting uglier by the minute. @WTHRcom

Colts came back from 21 down vs. the Bengals so..?

2:05 p.m. - Two costly penalties on the Colts Rock Ya-Sin help the Titans drive for a go-ahead score 21-14. The first was a pass interference call on a third down pass, followed by a hands-to-the face call that nullified a Colts sack of Tannehill at the Indy 13. Derrick Henry scored his second touchdown of the game with 6:20 left in the half.

1:55 p.m. - Darius Leonard bats down a 3rd down pass, forcing a Titans punt. But the Colts cannot move from their own 12 yard line and punt it back to Tennessee.

1:38 p.m. - A pass interference call on Tennessee in the end zone sets up the Colts at the 1, and Jacoby Brissett runs it in from there to help the Colts tie the game at 14. Rivers passes to Burton, Himes and Pittman helped the Colts drive 66 yards in 6 plays.

.@JBrissett12 comes in at the goal line ... And he finds the end zone!

#Titans score easily and the #Colts do too. 7-7 early here at Lucas Oil.

1:17 p.m. - The Colts pick up a big first down at midfield to keep their first drive alive on backup quarterback Jacoby Brissett's 4th down scramble.

#Titans moving the ball with ease on that opening drive against the #Colts D without Deforest Buckner or Denico Autry up front.

Derrick Henry 4 carries for 30 yards. 2 catches for 16 and a touchdown.

Early 7-0 hole for Philip Rivers and the horseshoe to climb out of.

Credit: AP
Tennessee Titans running back Derrick Henry (22) gets past Indianapolis Colts free safety Julian Blackmon (32) for a touchdown in the first half of an NFL football game in Indianapolis, Sunday, Nov. 29, 2020. (AP Photo/Darron Cummings)

1:00 p.m. - Titans receive the opening kickoff and start at their own 25 after a touchback.

12:00 p.m. - Colts DT DeForest Buckner will be watching today's game on television as he sits out while on the Reserved/COVID-19 list.

Frustrated I can’t be out there with my brothers today! But I’ll be there in spirit and yelling at my tv! We built for this‼️ Go handle business today fellas 💪🏾 #BeatTheTitans #ForTheShoe

11:30 a.m. - The Colts listed their inactive players for today's game. Quarterback Philip Rivers is active after he was listed as questionable after limited work in Friday's practice.

10:30 a.m. - Injuries and COVID-19 protocols will leave the Colts missing key pieces of their offense and defense today.

The league's second-best defense will be playing without its top run stopper in defensive tackle DeForest Buckner, who was placed on the Reserve/COVID-19 list Wednesday.

The team announced Saturday that running back Jonathan Taylor was also placed on the Reserve/COVID-19 List, and center Ryan Kelly was downgraded from questionable to out for Sunday's game.

Starting quarterback Philip Rivers was limited in practice Friday by a toe injured against Green Bay last Sunday, and is listed as questionable for the Tennessee game.

The Colts elevated center Joey Hunt and defensive end Cassius Marsh to the active roster from the practice squad as COVID-19 replacements in corresponding moves.

The team also elevated defensive tackles Kameron Cline and Rob Windsor to the active roster from the practice squad and activated wide receiver Ashton Dulin from the Injured Reserve List.

We have downgraded C Ryan Kelly to OUT and downgraded CB Isaiah Rodgers to questionable for #TENvsIND.https://t.co/bX13yappaO