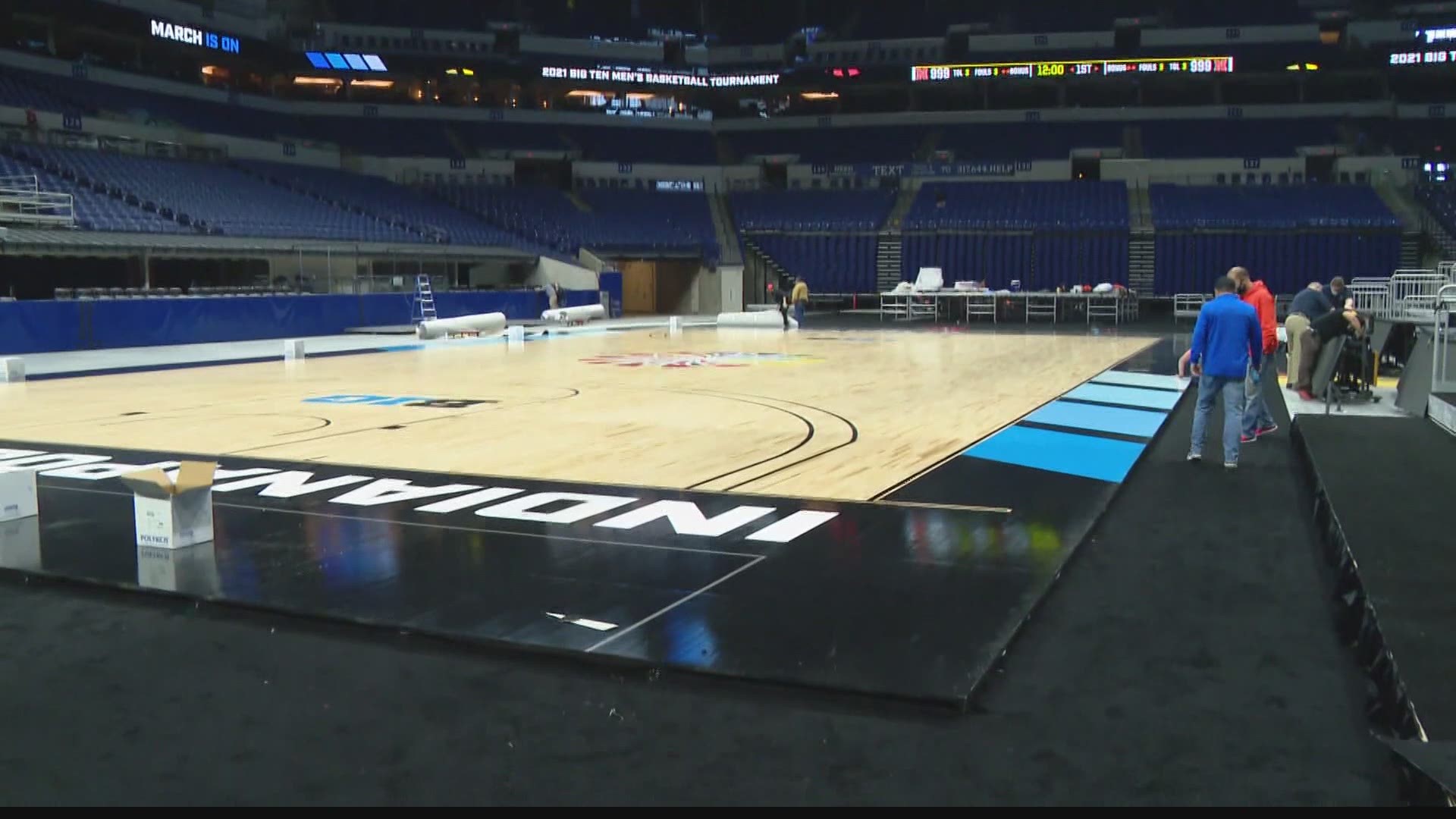 It had been scheduled to take place at the United Center in Chicago, but the Big Ten decided last month to move it to Indianapolis, in part, to permit at least some fans to attend.

To do so required submitting a detailed health and safety plan to the Marion County Health Department. Here are some of the measures in place to mitigate the spread of COVID among fans, teams and people working inside Lucas Oil Stadium during the five-day tournament:

The plan also outlines pre-game and game day testing for the players, coaches and anyone interacting with the teams and the protocols in place if someone tests positive.

The plan calls for public areas to be disinfected between sessions, with the court, benches and team areas cleaned between games. Additionally, teams will have staggered entry into and out of the stadium with post-game interviews all virtual.

The safety plan for the Big Ten Women's Tournament underway at Banker's Life Fieldhouse is nearly identical. Given that the fieldhouse is a smaller venue, capacity is capped at 14 percent, or 2,500 fans per session with pods ranging from two to four seats.

The NCAA will allow up to 25 percent capacity at games during the 2021 Division I Men’s Basketball Championship being held in Indiana. That capacity is for all rounds and the Final Four, and it includes all participants, essential staff and family members of each participating team’s student-athletes and coaches, and a reduced number of fans.

Tickets for each round of the tournament will become available on separate days, with the schedule operating as follows:

Attendance at each game will depend on the size of the venue. That 25 percent capacity is for all rounds and the Final Four, and it includes all participants, essential staff and family members of each participating team’s student-athletes and coaches, and a reduced number of fans.

You can get more information here, including a link to register and be notified if tickets are made available.

The Division I Men's Basketball Championship will tip off with First Four games Thursday, March 18. The entire tournament will be in Indiana, with 55 of the 67 games taking place in Indianapolis.

The NCAA and Marion County Public Health Department put together COVID-19 health and safety protocols to be used during the tournament. The protocols focus on testing, social distancing and contact tracing.

Before teams even step foot in Indianapolis, each participant is required to have seven consecutive negative COVID-19 tests. The NCAA will work with IU Health to provide “health-related support including administration of daily PCR tests for Tier 1 individuals upon arrival and throughout the tournament.”

Participants will also wear contact tracing devices from KINEXON during games and practices. NCAA said the devices will provide data that helps them track if someone was in close contact with an individual who tested positive.

People that had both doses of the vaccine at least two weeks before the tournament and haven’t tested positive for COVID-19 in 90 days will not have to undergo testing.

NCAA said teams will stay in a “controlled environment” similar to what we saw during the NBA. Marriott properties will house most of the participants.

"The number one priority for decisions around the tournament continues to be the safety and well-being of everyone participating in the event," said NCAA Chief Medical Officer Dr. Brian Hainline. "We have been in regular conversations with the NCAA COVID-19 Medical Advisory Group and local health officials to make sure we have the right protocols in place to provide a safe environment. Additionally, IU Health is providing critical testing and monitoring services enabling us to safely conduct the tournament."

The NCAA released contingency plans for teams in the 2021 Division I Men’s and Women’s Basketball Championships if they have COVID-19-related issues.

The NCAA first laid out four key points about the tournaments:

If a team is forced to withdraw, replacement teams will only be introduced into the championship within 48 hours after the announcement of the field, and at no time thereafter.