Indiana native Ryan Newman has officially been released from the hospital. 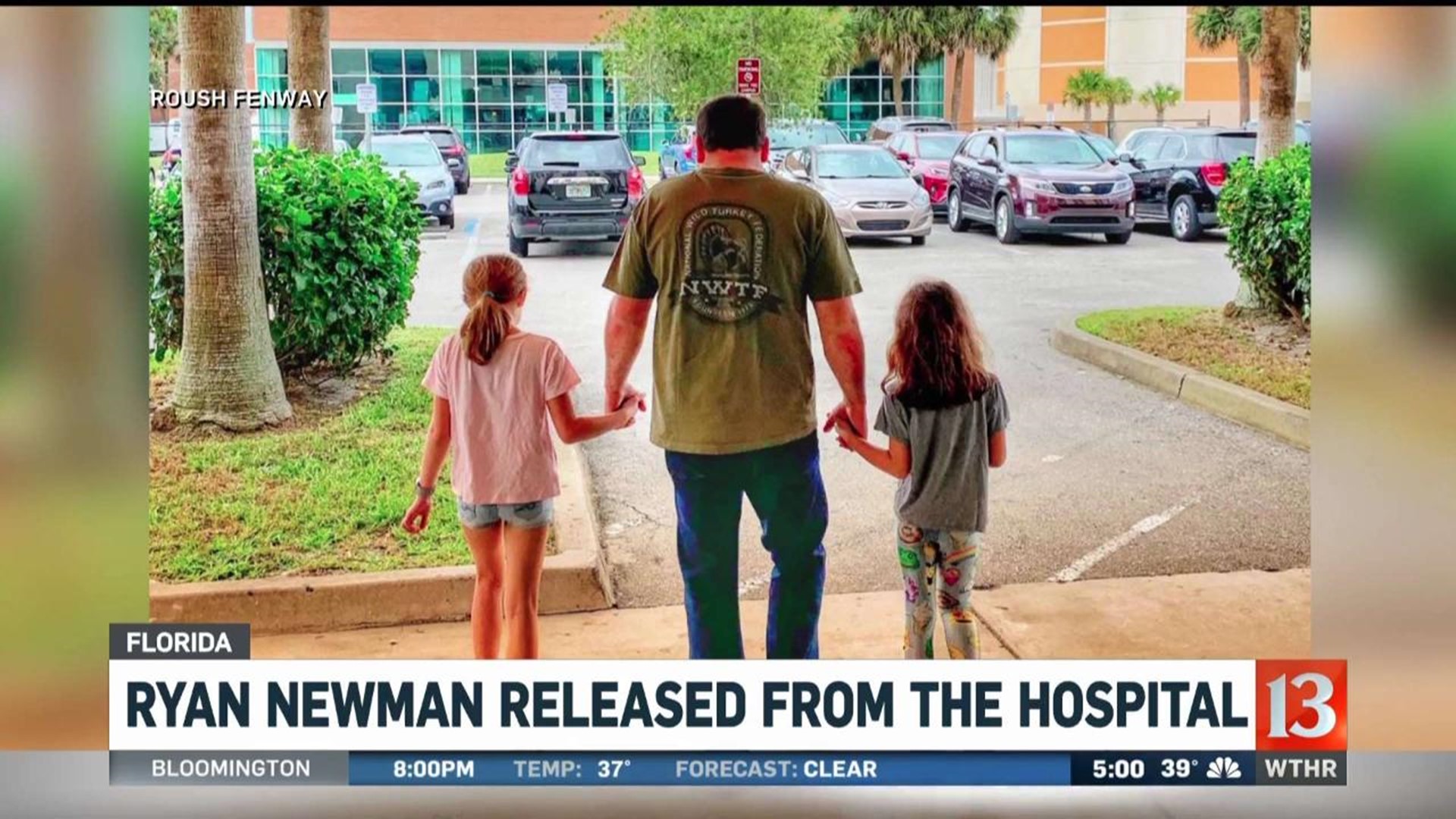 DAYTONA BEACH, Fla. (TEGNA/WTHR/AP) — Indiana native Ryan Newman has officially been released from the hospital following a terrifying crash at the end of Monday's rain-delayed Daytona 500.

Roush Fenway tweeted that Newman had been "treated and released from Halifax Medical Center" on Wednesday afternoon.

His wife, Krissie Newman, tweeted video of him walking out with his daughters saying, "Best sight ever!!!"

Earlier Wednesday, Roush Fenway shared a photo of Newman with his two daughters in the hospital.

An earlier tweet in the thread reads: "Ryan Newman continues to show great improvement ... The veteran driver is fully alert and walking around Halifax Medical Center."

Roush Fenway said there is no timetable for Newman's return to racing as they announced Ross Chastain will be filling in at this weekend's race in Las Vegas.

The nature of Newman's injuries have not been disclosed.

Newman, who is from South Bend, spun then flipped in a frightening crash in the final yards of the race.​ As Newman rolled onto the hood of his car, he was struck in the driver's side by the car driven by Corey LaJoie.

"Dang I hope Newman is ok. That is worst case scenerio [sic] and I had nowhere to go but smoke," LaJoie tweeted after the race.

He continued to tumble in a shower of sparks before flames shot from his car as it came to rest. Emergency crews rushed to his race car to extinguish the flames.

The track safety team had to roll Newman's car onto its tires before they could work to get him out of the vehicle. Several minutes later, they got him onto a stretcher and into a waiting ambulance behind the shroud of black screens.

About three hours later, a NASCAR spokesperson read a statement from Newman's Roush Fenway race team that said the driver was in serious condition with what doctors described as non-life-threatening injuries.

President Donald Trump, who was at the race when it started on Sunday, tweeted support for Newman shortly after the NASCAR update came out about his injuries.

Members of the racing community and others immediately took to social media to offer their thoughts and prayers to Newman as they waited for word on his condition.

Please Pray for @RyanJNewman. The wait is brutal.

Can’t pray enough for Ryan Newman. The angle of the car hitting him once he flipped over is frightening. We can only pray to God that he is ok, and all our fears will go away. 🙏🏼

I hope Newman is ok. It look nasty to me. Praying for him

Not the 1st time we’ve seen Ryan Newman upside down at a superspeedway. But I don’t like the driver’s side damage to his car at all. #Daytona500

Just hoping for good news as I constantly refresh all my social media feeds...

Newman, a graduate of Purdue University, won the Daytona 500 in 2008. He also won the Brickyard 400 at the Indianapolis Motor Speedway in 2013.

As Hamlin and his team celebrated the win, some viewers questioned their enthusiasm with Newman still trapped in his car. After the race, team owner Joe Gibbs reportedly apologized to the crowd, saying the team did not see the severity of Newman's accident.

Odd feel in a very subdued Victory Lane after the #Daytona500

Joe Gibbs immediately addressed the celebration from the FedEx team.

I also asked Denny Hamlin how safe he felt in the driver's seat at a super speedway. He described Ryan Newman's wreck as "worst case scenario" pic.twitter.com/L3YZFLKz59

Joe Gibbs issues an apology for the Denny Hamlin team celebrating winning the #Daytona500 after the Ryan Newman wreck. Says they did not see the severity of it and are praying for him. Somber. pic.twitter.com/sjqf8SkNvQ

“I think we take for granted sometimes how safe the cars are and number one, we are praying for Ryan,” Hamlin said.​

The race on Sunday was postponed a day for just the second time in 62 years after it rained moments following after President Donald Trump's ceremonial pace lap. The rain dampened a hyped season opener with a visit from Trump that energized the sold-out crowd.

The #DAYTONA500 has been rescheduled for 4pm tomorrow due to weather. Gates open at 1 p.m. and parking opens at 11 a.m.

For information about the NASCAR Weather Protection Plan, visit https://t.co/Q5eVTUjrlF. Thank you for your patience and we'll see you tomorrow! pic.twitter.com/VLTzKtrhCl

Several NASCAR executives were stationed at entrances around Daytona International Speedway to welcome fans back to the track Monday.

It was a clear attempt at apologizing a day after rain dampened the 62nd running of “The Great American Race.” The last time the 500 was postponed was 2012 and the bulk of fans tend not to return after postponements.

As the Associated Press reported Sunday, Trump made an historic visit to the race track in Daytona, becoming the second president ever to attend the Daytona 500. Trump was given the honor of commanding drivers to start their engines. Trump made a grand entrance before the start of the race.

Hundreds waited up to three hours to get through gates because of heightened security measures. Daytona 500 pole-sitter Ricky Stenhouse Jr. signed autographs and mingled with fans while they waited in long lines. 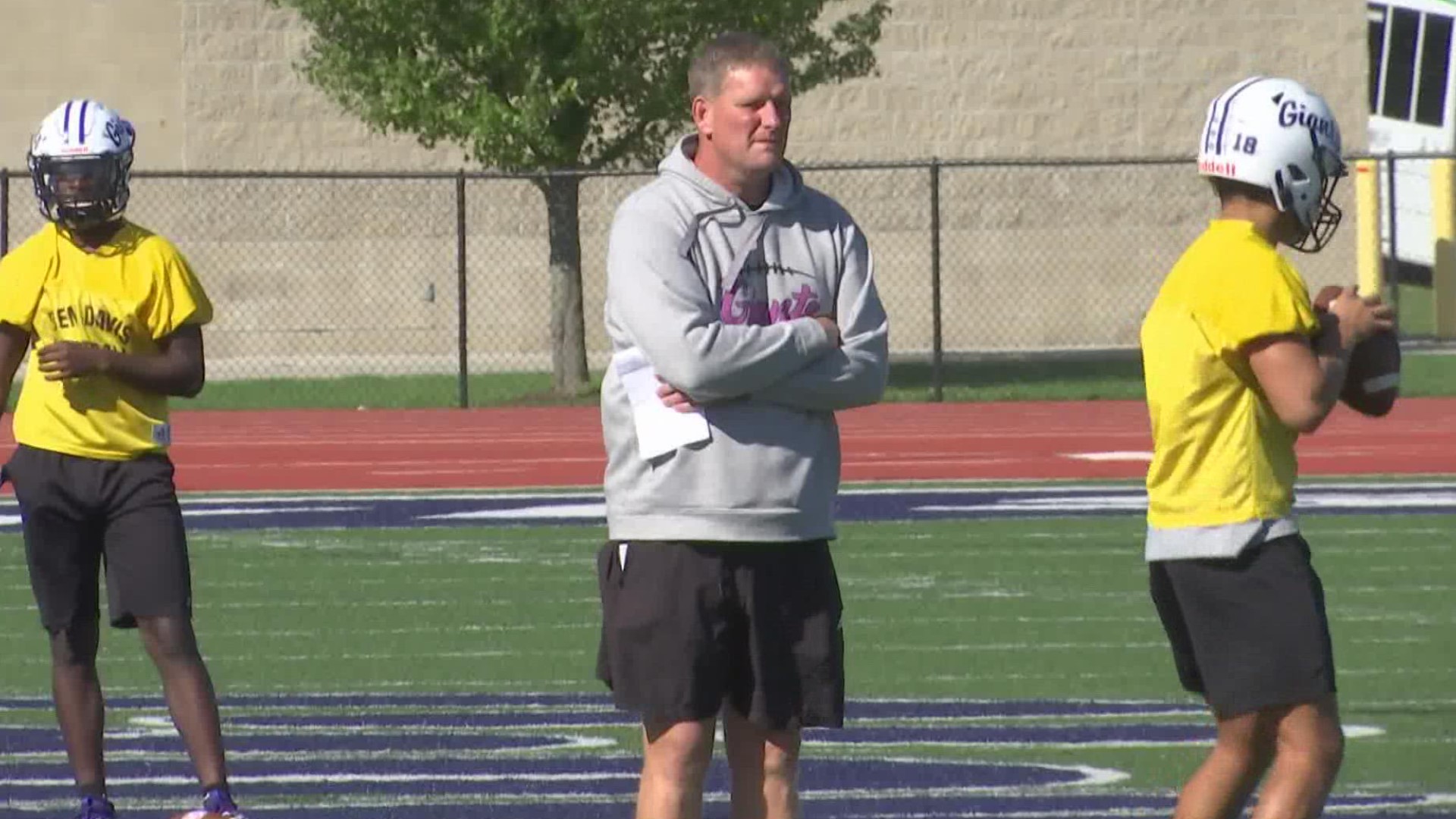