Marco Andretti posted the fastest lap practice Friday, getting around the 2.5-mile oval at 231.802 mph after drivers were given a boost of roughly 50 horsepower. 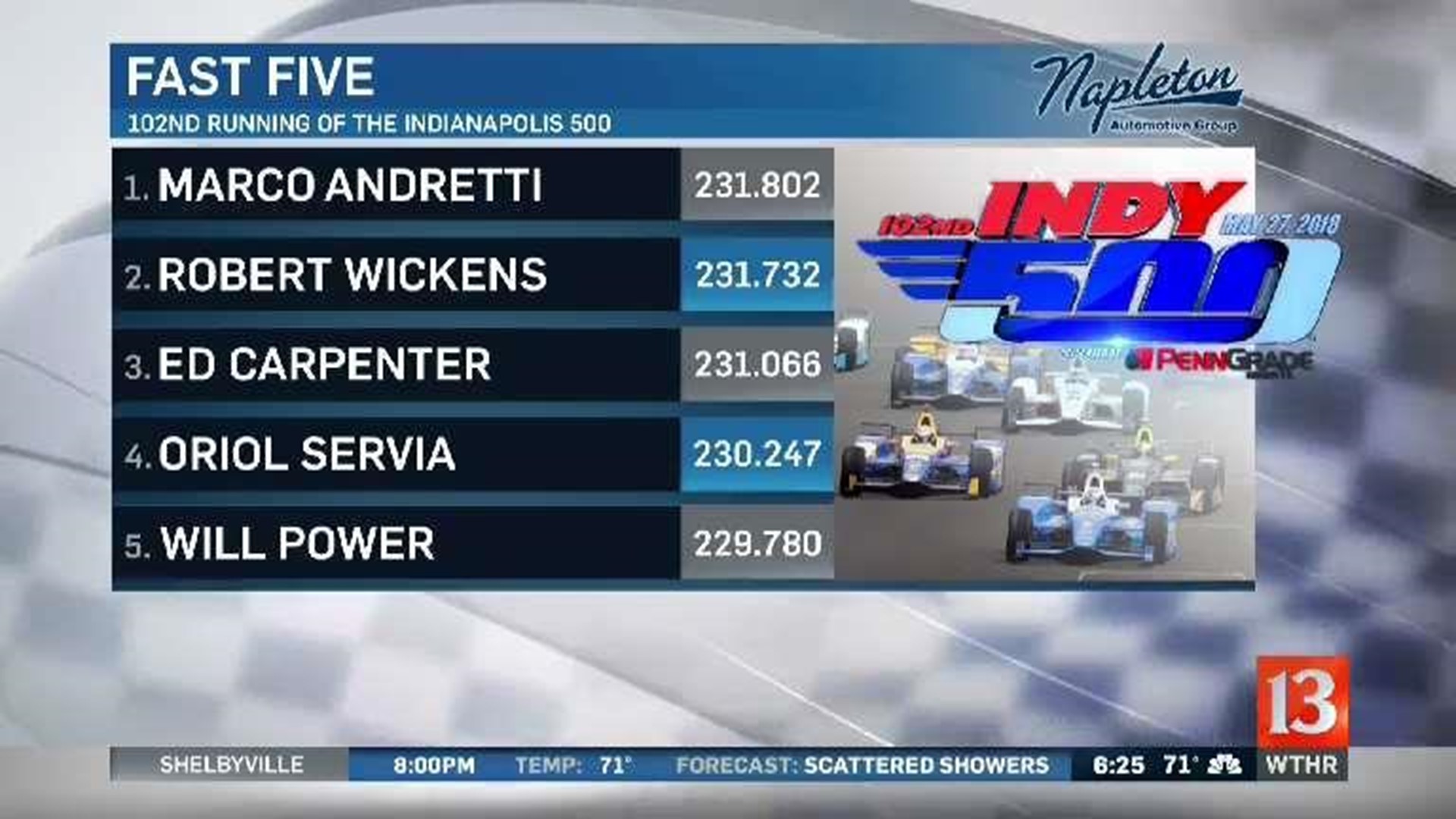 INDIANAPOLIS (AP) — Marco Andretti could be the pole favorite for the Indianapolis 500. He's certainly been the most consistently fast driver all week in practice.

Then again, nobody's really sure what to expect when the new IndyCars start qualifying Saturday.

Andretti posted the fastest lap practice Friday, getting around the 2.5-mile oval at 231.802 mph after drivers were given a boost of roughly 50 horsepower.

Andretti also had the fastest car Wednesday and third-fastest Thursday.

Those speeds might not be reflective of just where the son of team owner Michael Andretti and the grandson of 1969 race winner Mario Andretti fits into the 33-car lineup.

And because Andretti's big numbers have all come with a tow, even he's not sure.

All week drivers have been trying to solve problems: tire wear, handling in traffic and drafting from back in the field. So far Andretti thinks he has a car that will work on race day.

The question is whether it's good enough to make Sunday's nine-car pole shootout.

Rookie Robert Wickens, of Schmidt Peterson Motorsports, was No. 2 in practice with a speed of 231.732. Two-time Indy pole winner and driver-owner Ed Carpenter was third at 231.066. Oriol Servia, who is back with Rahal Letterman Lanigan Racing, was fourth at 230.247.

But it was Team Penske's Will Power, who had the fastest non-tow lap of the day at 229.780. He won last Saturday's IndyCar Grand Prix from the pole.

"I think results don't lie, right? So they (the Penske drivers) definitely did a very good job today," Wickens said. "I think they're top 3 no-tows, but there's some Hondas in there, there's the Carpenter team that is good with all three of its drivers. Tony Kanaan jumped in there at the end when the track actually wasn't that good in my opinion. So honestly, I think Tony could be a sleeper."

Danica Patrick was 20th on Friday with a top speed of 228.284 and Honda claimed three of the top four spots with Andretti, Wickens and Servia.

If trying to figure out these new cars wasn't tough enough, drivers will face even more obstacles Saturday.

While the expected rain stayed away most of the day and most of the week, the track was saturated shortly after the qualifying draw ended, forcing drivers to work on a mostly green track.

The forecast also calls for rain Saturday and Sunday, when the field is set and the pole shootout is held.

"Got to nail it on the first one, especially with — I think there's weather tomorrow, so at best one attempt tomorrow," Andretti said. "I think we're just going to have to play whatever hand we're dealt and wring it out."

Two teams will be scrambling overnight.

Australian driver James Davison hit the wall hard exiting the second turn Friday and tough he was released from the Indianapolis Motor Speedway infield medical center and cleared to drive, he's still not sure what to expect from A.J. Foyt's struggling No. 33 car.

"We'll be on track, just not sure how fast we're going to be with backup parts and so on," Davison said.

He wound up hanging around his favorite track for nearly an hour, making an impromptu stroll through Gasoline Alley to the pit wall where he was cheered.

He didn't even make it in time for Chip Ganassi Racing's annual pre-qualifying news conference.

The reason: A migraine headache.