When 54-year old racer, John Andretti, went to a doctor's appointment for a "routine" colonoscopy, he was given a diagnosis he hadn't prepared for: Stage 3 colon cancer. 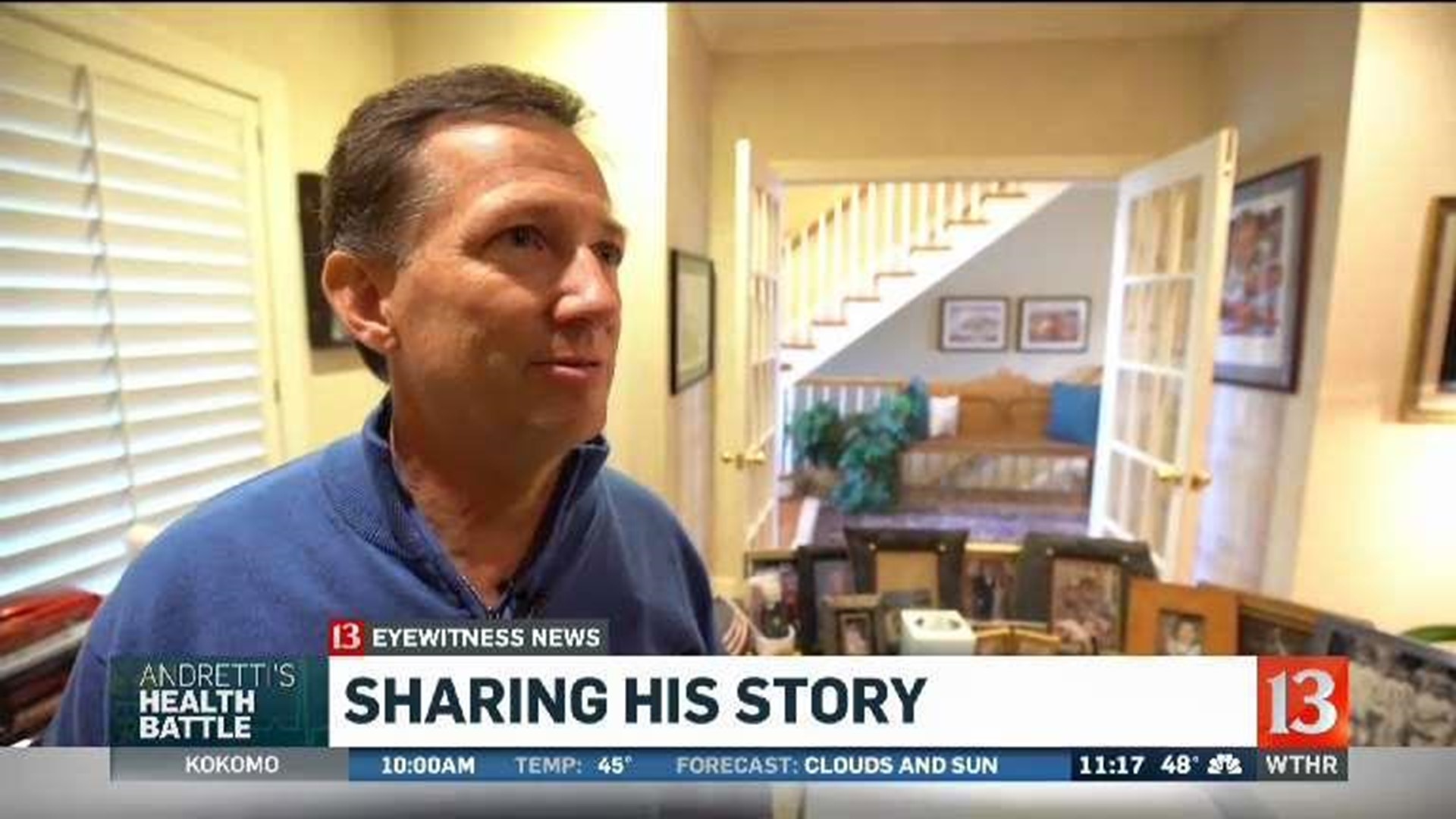 CONCORD, N.C. (WTHR) — Nothing is probably "routine" for a race car driver - especially for an Andretti. They spend their lives preparing for any kind of scenario.

But when 54-year old race car driver John Andretti went to a doctor's appointment for a "routine" colonoscopy, doctors gave him a diagnosis he hadn't prepared for.

During that January visit, doctors told John he had Stage 3 colon cancer. They quickly scheduled a surgery to remove 12-14 inches of his colon. As he healed from that surgery and went back for check-ups – he told doctors about a pain in his side. Doctors discovered the cancer had spread to his liver.

"Now I'm a Stage 4A. There is only a stage 4B from my understanding, so I'm not really excited about that. But the good news is that we are still on the side that has a good chance of being cured," Andretti explained.

"It's Just The Way Life Is"

Andretti is always an optimist. He's a giver, he's a helper, he's a rock-solid friend, a loving father and husband and certainly a fierce competitor. All of those qualities will help him in this race.

John raced in 12 Indianapolis 500s and spent 17 years in NASCAR. He had an amazing career. He has a wife of 30 years and 3 children. Now he's reflecting back all that as he looks ahead to chemotherapy treatments and another surgery.

Andretti and his wife, Nancy, now spend hours in the Levine Cancer Institute in Concord, North Carolina where John gets chemotherapy. He invited Dave Calabro to go with him to one of those treatments.

"Do you get mad at God?" Calabro asked, "Are you at a point where you're frustrated, why me? You do so much good, I'm wondering how you're processing this," Calabro asked as he watch the chemo pump into Andretti's body.

Andretti had a matter-of-fact answer, "I'm an older guy. This stage of my life it's, if it was going to happen, now is better. You look at these kids... I've done all my stuff. I've got a lot of things I love to do."

The "kids" Andretti is talking about are the children who he has spent years bringing smiles to their faces in Riley Hospital for Children and St Jude Children's Research Hospital. John has seen what they go through.

That's why he dedicated so much of his own personal time and money over the years – to raise their spirits with visits, and raise money to help find ways to heal them.

"When you see them, it tears you apart. And it also motivates you and inspires you because of the attitude they have. You know, I can't be down or resentful. It's just the way life is," said Andretti.

Andretti told Calabro he is scared of what's happening to his body. He will have surgery in June to remove the cancerous portion of his liver. But first, he will walk his daughter, Olivia, down the aisle for her June wedding.

The Andretti Sense of Humor

The chemo isn't killing Andretti's playful sense of humor. "Chemo sucks a lot," Andretti says honestly with a laugh, "I don't think anybody walks out saying 'Man this is great. Give me more!'"

His body is feeling the effects of the treatments. And he thinks about the future.

"Are you scared," Calabro asked him.

"Initially when it happened, no," Andretti reflected, "But as thing shave progressively gotten worse, yeah. To be honest it's out of my control."

The diagnosis weighs on his mind, but he finds ways to lighten spirits, "I'm gonna have skinny arms, skinny legs and be bald. I'll be perfect!" he laughs.

A Message for others - #CheckIt4Andretti

As Andretti openly talks about his cancer for the first time, he has a powerful, personal message for others who may also be putting off a colonoscopy: "Don't wait!"

"You know how much I really didn't want to talk about this or do this, because I don't want it to be a story about me. I'm more worried about Riley and St Jude and other kids and helping them. But the way to help your family is if you don't do it for you, do it for your family. Because everybody's life that you affect, that you're a part of, I think is really important," said Andretti.

John wants to help save lives and raise awareness. If his story convinces you to get a screening or learn more about colonoscopy health guidelines, let him and us know. Use the hashtag #CheckIt4Andretti.

John encouraged Dave Calabro to get a colonoscopy. Calabro is the same age as Andretti, 54.

Both men put their routine screening off 4 years from the recommended age of 50.

Calabro is glad he finally got a colonoscopy. Doctors found and removed two pre-cancerous polyps.

Andretti is one of an estimated 135,430 people who will be diagnosed with colorectal cancer this year, according to the National Cancer Institute. Colon and rectum cancers are the fourth most common cancer diagnosed, but it is the second leading cause of cancer death in the United States.

If it is caught early, colon cancer is very survivable.

Colorectal cancer is cancer of the large intestine, or colon, which is the lower part of the digestive system.

Image courtesy of Centers for Disease Control and Prevention

Most cases of colon cancer start as small, noncancerous polys in the intestine. Eventually, some of the growths become cancerous.

Doctors recommend both men and women begin screening for colorectal cancer at age 50. Statistics from the CDC show Hoosiers get those screenings much less frequently than is recommended. Based on 2014 data, Indiana ranks 42nd in the percentage of adults over 50 who've been screened according to the recommendations. That's just 62.5% of Indiana's over 50 population. Massachusetts ranks number one, with 76% of people age 50 and old getting the recommended screening.

Often, there are no symptoms for colorectal cancer, which is another reason doctors say the screenings are crucial.

If there are symptoms, they can include some of the following:

You can also use the National Cancer Institute's Colorectal Cancer Risk Calculator.

Andretti is sharing his story to help encourage others to get screened regularly, something he did not do.