Long before James Hinchcliffe was racing around the Indianapolis Motor Speedway, he was a Canadian teenager looking for a prom date. 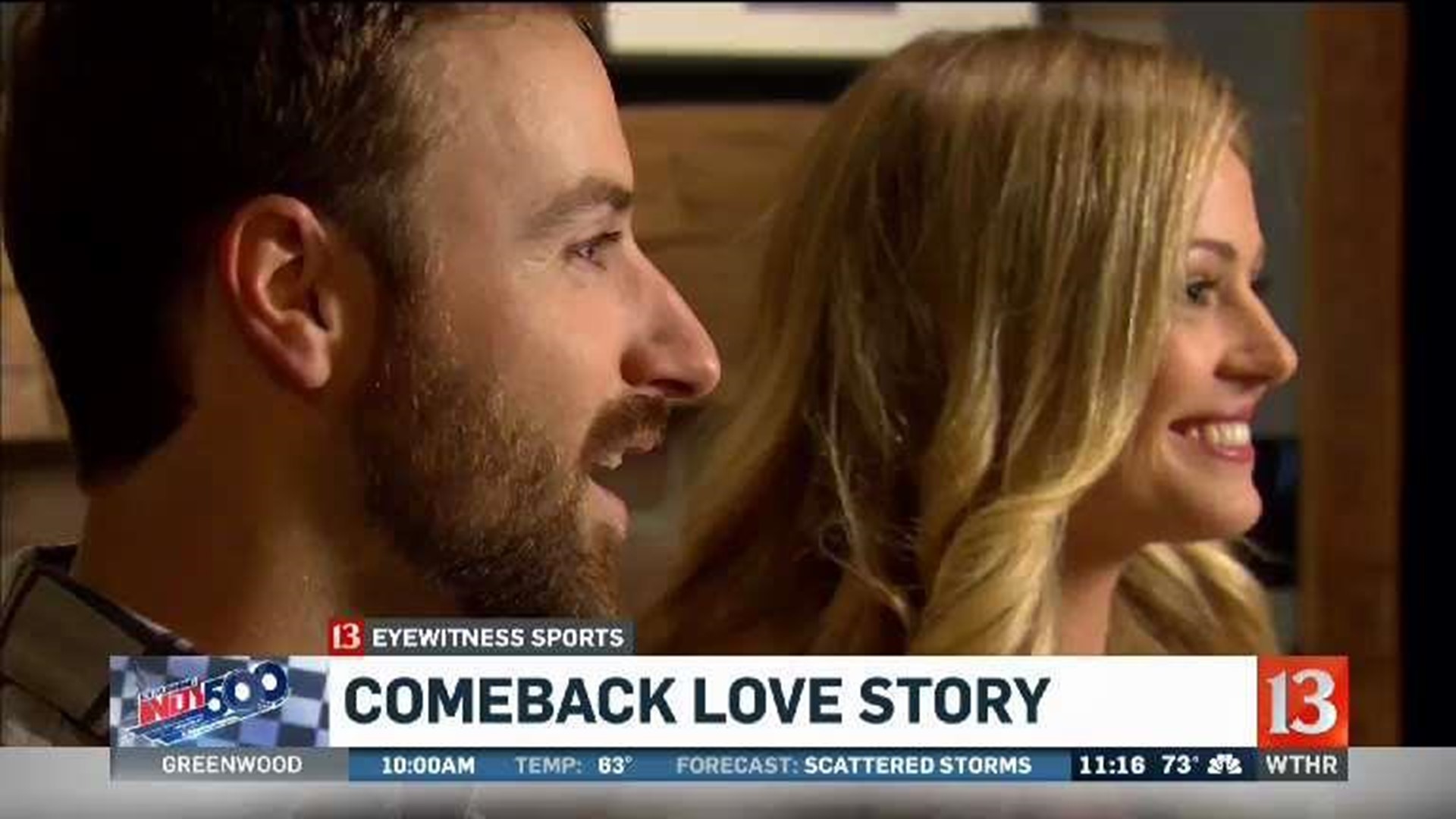 In 12th grade, Hinchcliffe was also chasing a date to the 2004 Oakville Trafalgar High School prom after he broke up with his girlfriend a few days before the event. Desperate, he asked the friend of a friend from an acting class they all took together. Her name is Rebecca Dalton, a Canadian actress.

Rebecca Dalton and James Hinchcliffe before prom in 2004.

"I asked Becky to come with me as a friend because I would never have had the guts to ask her as a date," said Hinchcliffe. "Out of my league, so that was a foolish proposition."

Hinchcliffe and Dalton, who now is his girlfriend, don't agree on the timing of the late invitation.

"She thinks that it was much closer to the actual date," said Hinchcliffe during an interview in the basement of his home in Indianapolis.

"Oh yeah, I remember it being the morning of," said Dalton.

"There's no way. I wouldn't do that to you," said Hinchcliffe.

"You remember me on the phone saying, 'How am I going to get a dress in time?'" said Dalton.

"And I remember thinking, 'What a ridiculous statement. You have like three days'," said Hinchcliffe.

Dalton found a dress. The aspiring race car driver arrived to pick up his date, two years his younger, in a red Mini Cooper S. Rebecca's father was watching.

"Apparently, the way he tells the story, maybe I drove a little spiritedly on to the street and into the driveway," said Hinchcliffe. "And I get out of the car having never met him before and he just happens to be outside to witness this entry. I get out of the car and the first thing he says is, 'I hope you're not going to drive like that with my daughter in the car' - great first impression."

Hinchcliffe and Dalton at the 2016 Indianapolis 500.

"It was a strictly platonic date because, frankly, I was terrified of her," said Hinchcliffe. "She was pretty much the prettiest girl in school. I got to rock up with her on my arm. And that was awesome for a nerd like me."

Hinchliffe graduated a few weeks later and went on to fulfill his dream to race IndyCars.

Dalton graduated two years later and fulfilled her dream to be an actress. Her many credits include the current series Good Witch on the Hallmark Channel.

The rising stars in two different worlds of entertainment did not see or talk to each other after high school for almost 12 years.

"When you try to kill yourself at the Indianapolis Motor Speedway, it brings a lot of unexpected attention on to you," said Hinchcliffe.

Hinchcliffe's serious accident in 2015 was big news in Toronto. Dalton followed the reports, but several months passed before she reached out through their mutual friend from high school. A FaceTime conversation in September 2015 led to Facebook messages, then text messages. They finally got together for a first date dinner in February 2016. Hinchcliffe was testing his IndyCar in Fontana, California. Dalton was working on a project in Los Angeles.

"Our first date, 12-13 years after we met or whatever, literally we were like crying laughing for half the dinner," said Hinchcliffe.

"Were we asked to leave the restaurant?" asked Dalton.

"Not quite, but I'm fairly certain we offended the couple next to us," said Hinchcliffe. "It was just the most fun I've ever had."

"People love this story," said Dalton. "I mean everyone loves one of those reconnecting stories. I'm sure there's a script in there somewhere. Maybe one day I'll write it."

Dalton actually once portrayed the girlfriend of a seriously injured race car driver in an episode of the CTV medical drama Saving Hope, which Hinchcliffe watched with his girlfriend.

"The guy was bleeding to death," said Hinchcliffe. "It was all these kind of freaky coincidences."

"And the first thing he said when he woke up?" said Dalton

"When can I drive again," said Hinchcliffe, the same thing he asked after his accident.

"There was a very dramatic scene with me running in with him on the stretcher bleeding and I'm crying," said Dalton. "The first thought was, I would never be able to ever do this."

"Here we are," said Dalton.

"I know her as one thing," said Hinchcliffe. "And then she's obviously on the screen portraying someone else, this completely different character. We'll sometimes talk about it and refer to that person as the character's name. It's weird having a conversation with her about her, but it's not her. It's someone else. But I love watching her perform. I think it's really cool."

"Honestly, every time I see him on track I'm so proud," said Dalton. "I really am. It's incredible because acting is one thing, but I'm not out there risking my life when I'm in front of the camera."

Dalton still splits time between Toronto and Los Angeles for acting roles, but she has moved to Indianapolis with her three-year-old cockapoo, Lucy.

"Sometimes I think we reconnected just so these two could find each other," said Dalton, looking at her dog in her boyfriend's lap.

"It's true. She and I, Lucy and I, have a pretty special bond," said Hinchcliffe while kissing Lucy, then looking at Dalton. "You're great too."

Dalton recently moved to Indianapolis with her cockapoo, "Lucy."

"Just getting through life with him is awesome because you meet every conflict with this really light attitude," said Dalton. "He can get through anything."

"You're so sweet," said Hinchcliffe, stopping her mid-sentence with a kiss.

"He's just this bright, funny, intelligent, light person to be around," said Dalton. "You can make a joke about anything. We honestly spend all day, every day laughing. It's just one big joke."

"You make that sound bad," said Hinchcliffe. "But you're right. I know what you mean."

The Indy 500 is no joke. Hinchcliffe wants to impress his prom date with a win in the Greatest Spectacle in Racing.