IndyCar driver John Andretti has died at the age of 56 after a long battle with cancer. 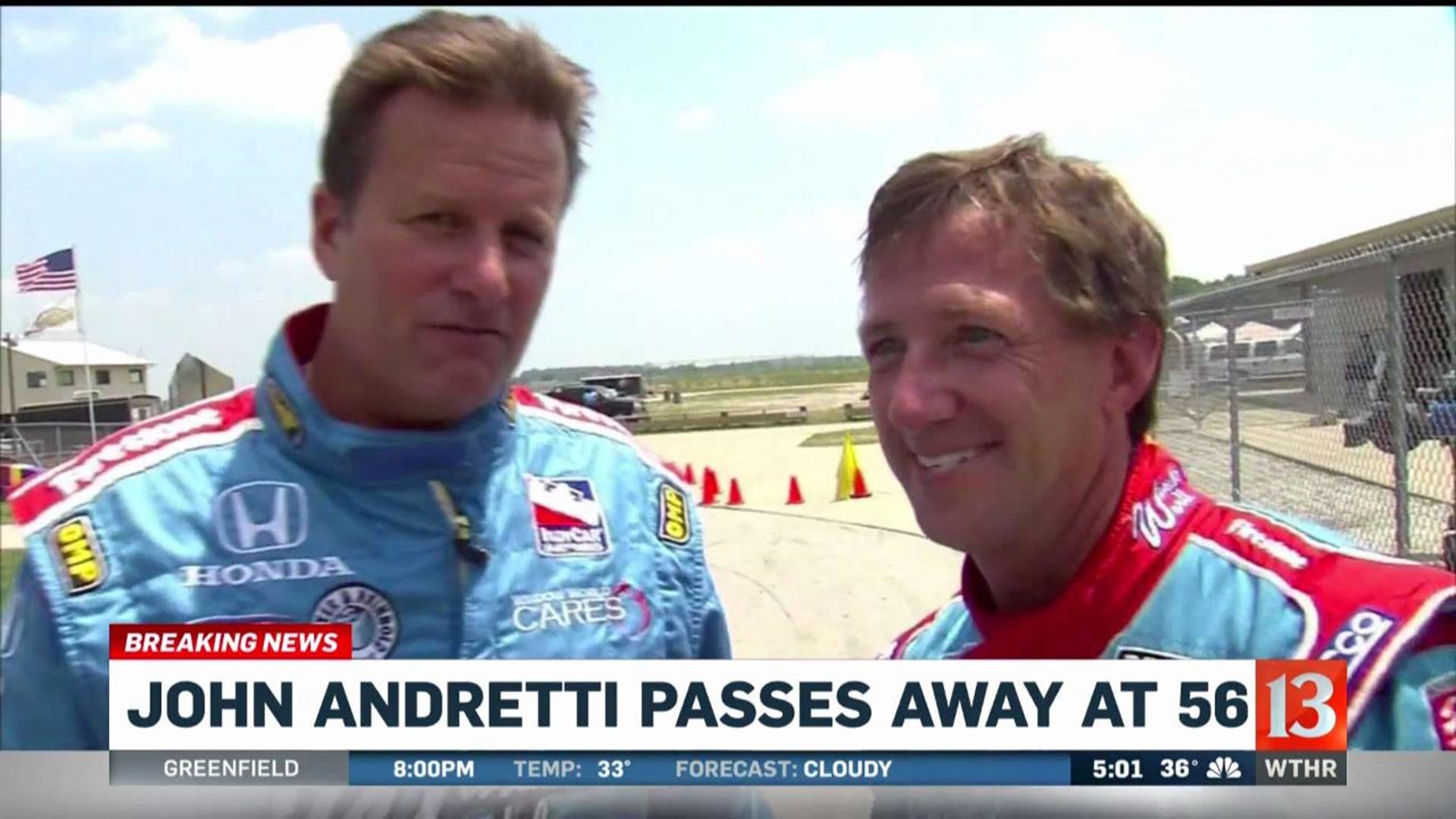 INDIANAPOLIS (WTHR) — IndyCar driver John Andretti has died at the age of 56 after a long battle with cancer.

Andretti carried on the family racing tradition with a long career in both NASCAR, IndyCar, sports cars and even NHRA drag racing. John was the nephew of racing legend Mario Andretti, cousin to current IndyCar team owner Michael.

Sandwiched between his early and late IndyCar career was the meat of his racing in the NASCAR Cup series. John drove in nearly 400 races over 17 years, most of them for the legendary Richard Petty, winning twice.

Andretti raced in the inaugural Brickyard 400 in 1994 and 10 more after that.

As John's racing career slowed down, his community service only sped up. He founded the Race4Riley in 1997. The annual go kart race in New Castle and the surrounding events have raised over $4 million for Riley Hospital.

In April 2017, Andretti revealed that he was battling stage four colon cancer. He became an advocate for colonoscopy screening with the "Check It For Andretti" campaign.

During a routine check up back in January 2017, doctors told Andretti he had Stage 3 colon cancer. He had a relapse of the cancer in 2018 and Andretti announced his cancer had returned again in April of last year.

Andretti Autosport posted a message on twitter about John's passing saying in part:

"When first diagnosed with colon cancer in 2017, John vowed to fight back and use his voice to help spread the word of prevention and early detection. He fought hard and stole back days the disease vowed to take away. He helped countless others undergo proper screening, and in doing so, saved lives."

"He's used his platform to really give back and I think that's what has endeared him to most of us," Boles said.

Immediately after news of his death came out, people began posting about John Andretti, their love for him and all he did.

Godspeed John Andretti. My first IndyCar teammate. A true racer and great human. I am heartbroken for Nancy, Jarett, Olivia, Amelia, and the entire Andretti family. I will miss your sense of humor the most. Please #checkitforAndretti https://t.co/t7mXYnbaqk

It’s with heavy hearts that we say Rest In Peace to John today. Thinking of the whole Andretti family as they go through this tough time. pic.twitter.com/yxAkCFsw6T

Rest In Peace #JohnAndretti. The best godfather. Your passion for Motorsport was admirable. Always the good ones we lose too soon. 🙏🏽 #checkit4andretti pic.twitter.com/WtpSPDzdsV

John was truly one of the nicest and caring people you could ever associate with. I can't say he was a friend, but he made you feel like one. His work for Riley Hospital, and more recently, colon cancer awareness was incredible. He was also a versatile, fine race car driver. https://t.co/bxKYNykzaM

We are saddened to report John Andretti has died after his battle with colon cancer. pic.twitter.com/sQmdlVM5Q4

Oh man. I knew this day was coming but feeling heartbroken. John Andretti was an incredible human being. He was passionate and humble. A friend to many. He could drive any type of race car and make every person feel special. #CheckitForAndretti

Our condolences go out to the Andretti family on the passing of John Andretti. 🙏 John was the first driver to pull "Double Duty" in May of 1994. #CheckItForAndretti pic.twitter.com/uVk9j0zzz9

John Andretti passes away at the age of 56 after battle with colon cancer: https://t.co/Ac8gHk4Qxm pic.twitter.com/AXxhXHloBa

Andretti is survived by his wife Nancy and three children.