Colts QB Carson Wentz turned in solid numbers in a season-opening 28-16 loss to the Seattle Seahawks but was sacked three times and couldn't finish promising drives. 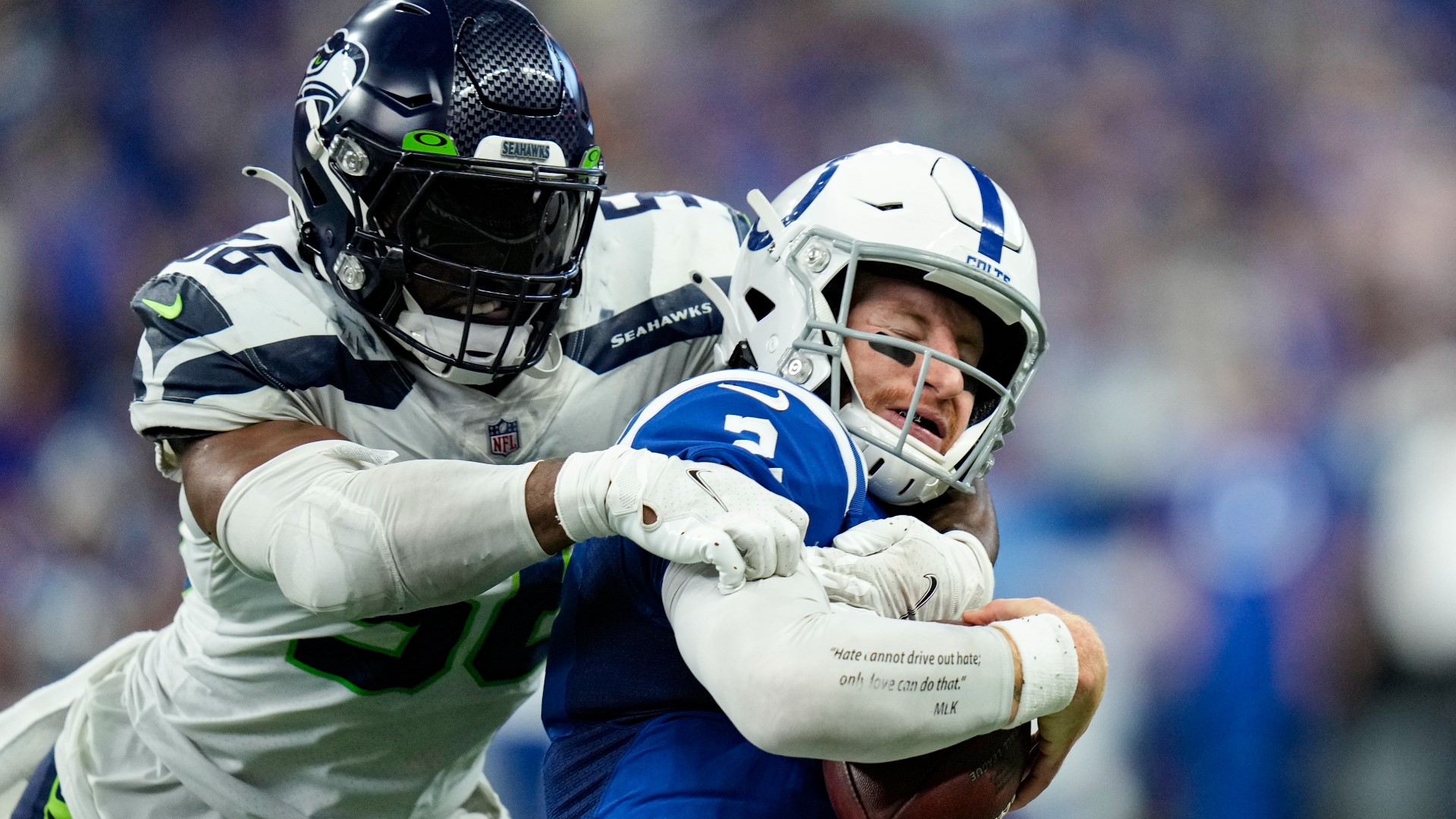 Wentz turned in solid numbers in a season-opening 28-16 loss to the Seattle Seahawks but was sacked three times, harassed many more times and couldn't finish promising drives.

He was 25 of 38 with 251 yards, two touchdowns and no interceptions, but the Colts still lost their eighth straight season opener.

4:04 p.m.: The Seattle Seahawks have defeated the Indianapolis Colts 28-16 to open the NFL season.

Carson Wentz completed 25-of-38 passes for 251 yards and two touchdowns in his Indianapolis debut. He was sacked three times.

Jonathan Taylor led Indianapolis in both rushing and receiving, carrying the ball 17 times for 56 yards and catching six passes for 60 yards. Fellow running back Nyheim Hines also caught six passes, totaling 48 yards receiving to go with 34 yards on the ground.

Coach says This one hurts. They really wanted to give the fans a win to start the season. @WTHRcom pic.twitter.com/0h7WUMs1Fe

Russell Wilson was 18-of-23 for 254 yards and four touchdowns for Seattle. Chris Carson had 91 yards rushing on 16 carries.

Tyler Lockett led all receivers with 100 yards and two touchdowns.

The Colts will host the Los Angeles Rams next Sunday at Lucas Oil Stadium.

4:02 p.m.: The Seahawks played conservatively on their next possession punting to the Colts with 1:40 to play. Michael Dickson's punt was downed at the Colts' 10-yard line.

3:55 p.m.: The Seahawks pulled in an onside kick to take possession just before the two-minute warning with a 12-point lead.

3:51 p.m.: Jonathan Taylor appeared to get into the end zone for a Colts touchdown, but a holding penalty on wide receiver Zach Pascal backed Indianapolis up to the Seattle 11-yard line with 2:12 to play.

One play later, Carson Wentz hit Pascal for his second touchdown of the game.

Wentz was sacked by Carlos Dunlap on the two-point conversion attempt, leaving the score at 28-16 Seattle with 2:08 remaining.

3:30 p.m.: Indianapolis moved into the red zone, but faced 4th and a long yard from the Seattle 18-yard line and went for it. Wentz was sacked by Darrell Taylor to turn the ball over on downs with 9:56 to play in the game.

3:20 p.m.: Carson Wentz converted a 3rd and 13 play with a pass to Mike Strachan one play after taking a big hit on a sack deep in Colts territory.

After a penalty, the third quarter ended with the Colts having 1st and 5 from their own 33.

3:16 p.m.: The Colts defense forced another Seattle punt before the end of the quarter, taking over on offense at their own 14-yard line with 1:22 remaining in the third quarter.

3:12 p.m.: Facing 4th and 1, Carson Wentz fumbled the snap on a quarterback sneak. The ball was recovered by Seattle's D.J. Reed, turning possession over to the Seahawks with just over three minutes left in the quarter.

3:08 p.m.: On the second play of the Seahawks' ensuing drive, Darius Leonard punched the ball free from Seattle running back Chris Carson's grasp near midfield.

Kwity Paye recovered the fumble for Indianapolis to bring the offense back out on the field.

3:05 p.m.: The Colts went backward on their next drive, including a 10-yard sack of Carson Wentz. Freddie Swain fair caught Rigoberto Sanchez's punt at the Colts 49-yard line with 6:16 left in the third quarter and Seattle holding onto a 21-10 lead.

2:46 p.m.: The Colts forced a Seattle punt, which Nyheim Hines fielded at the 5-yard line and returned to the 12 to start Indianapolis' first drive of the second half.

Wentz scrambled on a third down play, but threw incomplete, bringing Rigoberto Sanchez on for his third punt of the game.

2:41 p.m.: The Seattle Seahawks received the second half kickoff with a 21-10 lead at Lucas Oil Stadium.

Rigoberto Sanchez's kick went through the end zone for a touchback, setting the Seahawks up at their own 25-yard line to start the half.

Seattle picked up one first down, but sacks by Kenny Moore and DeForest Buckner forced the Seahawks' second punt of the game.

1 / 9
AP
Fans in the stand during a 9/11 tribute video before an NFL football game between the Seattle Seahawks and Indianapolis Colts in Indianapolis, Sunday, Sept. 12, 2021. (AP Photo/AJ Mast)

Carson Wentz is 12-of-15 passing for 114 yards and a touchdown in his Indianapolis debut. He completed passes to seven different receivers in the half.

Man. That was a rough first half. Wilson is amazing but the #Colts defense giving up 257 yards in the first half? Colts down 21-10. @WTHRcom

Seattle will receive the second half kickoff.

2:20 p.m.: After a penalty and a sack put the Seahawks in 2nd and 20, Russell Wilson connected with Tyler Lockett for a 69-yard touchdown with 41 seconds remaining in the half and a 21-10 lead.

Lockett has three catches, including two touchdowns, and 96 yards receiving in the first half.

2:11 p.m.: The Colts appeared to have converted on third down, but a penalty pushed them back. Carson Wentz's second incompletion of the day, as he tried to find tight end Mo Alie-Cox down the right sideline, forced a Rigoberto Sanchez punt.

2:08 p.m.: The Colts forced a quick punt from the Seahawks, getting the ball back at their own 33-yard line with just over five minutes left in the half.

2:00 p.m.: Indianapolis got back into the game quickly with a 7-play, 68-yard drive that took just over four minutes off the clock.

Carson Wentz, who has completed nine straight passes since missing on his first attempt, hit Zach Pascal for a 10-yard touchdown to pull Indianapolis within 14-10 with 7:04 left in the second quarter.

1:52 p.m.: Isaiah Rodgers, who was injured earlier in the game, was back in the game to return the kickoff following the Seahawks' touchdown. He brought the ball back to the Colts' 32-yard line.

Russell Wilson threw a nine-yard touchdown to Gerald Everett to cap off the scoring drive.

Wilson has all day to throw. The #Colts getting owned on the front line. Too easy ..pitch and catch. 14-3 @WTHRcom

1:37 p.m.: The Colts ended the first quarter with a three-and-out, finishing with a sack of Carson Wentz on 3rd and 4. Wentz lost nine yards on the play, setting up a punt to open the second quarter.

1:31 p.m.: Facing 3rd and 6 at the Colts 23-yard line, Russell Wilson connected with Tyler Lockett, who made an over-the-shoulder catch for a touchdown and a 7-3 Seattle lead.

1:27 p.m.: Colts cornerback Isaiah Rodgers left the game on Seattle's first possession of the game. There is no word yet on his status.

1:07 p.m.: The Colts received the opening kickoff, which went through the end zone for a touchback.

After continuing the drive deep into Seattle territory, the Colts stalled at the 3-yard line and called on Rodrigo Blankenship, who connected on a 21-yard field goal for a 3-0 Indianapolis lead.

11:37 a.m. Dave Calabro and Taylor Tannebaum will be covering the game today at Lucas Oil Stadium.

Opening day!! #Colts fans how you feeling about this one??? Join us on @WTHRcom Facebook at 1215! pic.twitter.com/lnGRWRYBrP

11:30 a.m. The Colts listed their inactive players for today's game.