The Colts legends were presented with their rings during halftime of the Colts vs. Rams game. 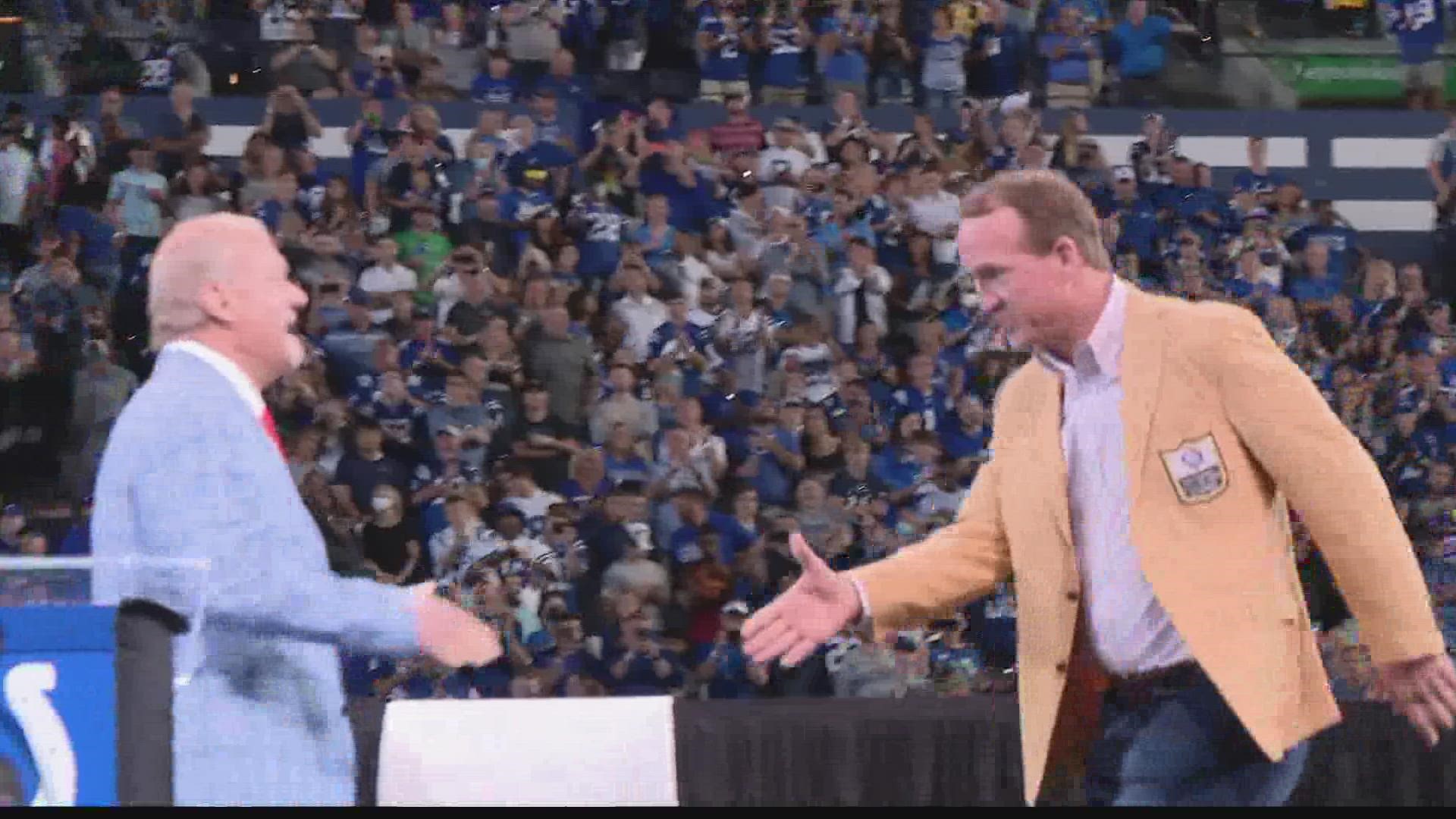 INDIANAPOLIS — The Indianapolis Colts lost to the Los Angeles Rams on Sunday but there was some good news out of Lucas Oil Stadium. Peyton Manning and Edgerrin "Edge" James were back in Indy to get their Hall of Fame rings.

Edge was part of the class of 2020 but because of the pandemic, he got enshrined during a ceremony in Canton, Ohio in August. Peyton was inducted into the class of 2021 just one night later.

Sunday was a very special day for that duo who had so much success together on the field.

It was also a special day for fans who cheered as their heroes returned to the field where it all started.

Good to have you home, 1️⃣8️⃣. pic.twitter.com/ZistjC9c91

The Colts legends were presented with their rings during halftime of the Colts vs. Rams game. Hall of Fame President David Baker also attended the ceremony.

Look at these beauties 😍

An up close look at the Hall of Fame rings Peyton Manning and Edgerrin James will receive at halftime today. pic.twitter.com/3jKPQ1lM47

Manning and James officially joined the exclusive club Friday, Aug. 6, when they received their gold jackets with Baker and NFL Commissioner Roger Goddell on stage.

Manning's dad, Archie, presented him with his jacket, while Irsay did the honors for James.

"(He) never was my coach, but always was my mentor. I can only think of about two or three games that he missed since I was in high school or college and in the NFL," Manning said. "Just a no-brainer as far as picking him to present me and just couldn't have a more appropriate person to do that."

James said Irsay had always taken care of him since his start with the Colts.

"The relationship we built over the years, I have so much respect for Mr. Irsay and the organization. I thought it would only be right," James said.

James is the Colts franchise leader in rushing yards (9,226 yards) and touchdowns (64), dating back to the team's first season in Baltimore in 1953. His yards per game average of 96.1 is 11 yards more than fellow Hall of Famer Eric Dickerson, who played four years in Indianapolis toward the end of his career.

Edge is back in the building. #Colts pic.twitter.com/VmTRjyd1U9

Manning was selected for enshrinement in his first year of eligibility. He threw for nearly 72,000 yards and 539 touchdowns in his career, which included a pair of Super Bowl wins. He brought the Lombardi Trophy to Indianapolis with a win in Super Bowl XLI in 2007, then closed his career by winning Super Bowl 50 in 2016 for the Denver Broncos.

WATCH: Dave Calabro's exclusive interview with Peyton Manning as he reflects on his Colts career