High school cheer during basketball postponed due to the pandemic 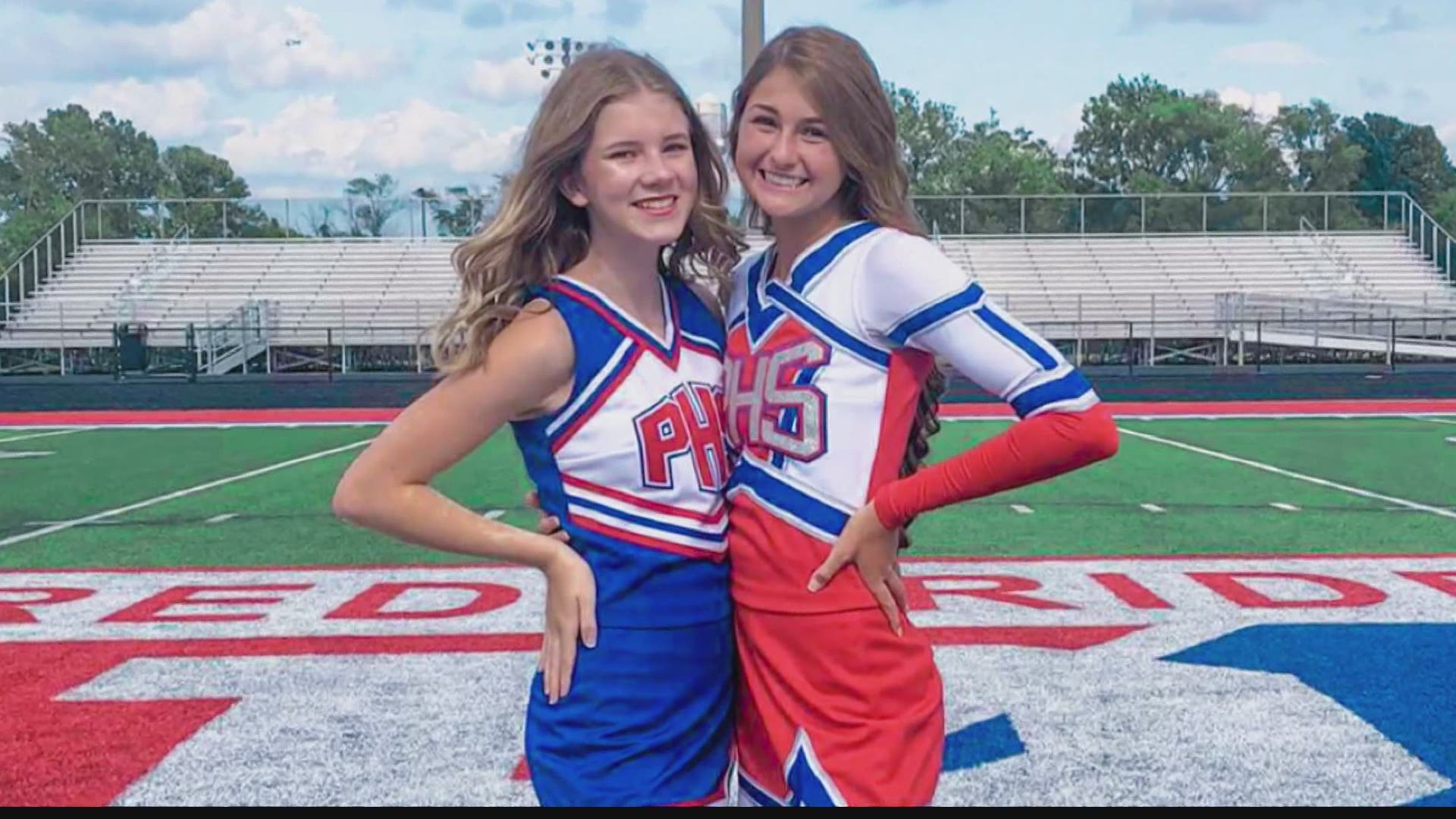 PLAINFIELD, Ind. — Cheerleaders at Plainfield High School tell 13News it feels as though “no one is fighting for us.”

They're frustrated after their school told them they were not allowed to cheer at basketball games until further notice due to the pandemic.

“If they say that they’re only letting the sports that are competitive do their sport, then that isn’t really the same for cheerleading," said Grace Blacketer, a senior and varsity cheerleader.

Cheerleaders at some schools are still allowed to cheer at in-person games this season, while other area schools have made a call similar Plainfield's.

Cheerleaders are often thought to be synonymous with school spirit.

But Moon and Blacketer will tell you being a cheerleader isn’t easy.

Blacketer said she hasn’t broken anything, but she has sprained her wrists and ankles.

Both have been cheering since they were toddlers. They’ve competed on cheer teams outside of school, and Blacketer has also competed as a member of Plainfield’s competitive cheer team.

“When I put on my uniform, I literally feel like a walking representation of the school. And wearing it on Friday is the highlight of my week,” Blacketer said.

“I felt so proud to be a Quaker. This was going to my first year on varsity,” Moon said.

“We were sat down at the beginning of practice and (the coach) went through a paper and talked about it. And then a lot of us started crying,” Moon said.

“We still practice. We wore our masks from the beginning. We lettered for varsity during football season, anyone who qualified. I don’t think we should have to practice and not be allowed to do our sport,” Blacketer said. “I’m still really emotional about it. It feels like, I feel like they have to decide if we’re going to be a sport or not."

For some cheerleaders, that decision will mean them getting to cheer at all.

"Not everyone who is on the competition routine is also a basketball cheerleader,” Blacketer said. “Like Emma said, it doesn’t feel like there’s anyone fighting for us.”

Why they can't cheer

Plainfield Community School Corporation officials declined a Zoom interview when 13News spoke with them via phone, but said they could answer questions via email. 13News provided the below list of questions regarding the schools' decision to postpone cheering during basketball games:

Plainfield Community School Corporation did not answer 13News’ questions but provided this statement.

“As I explained during our call, our goal is to keep students safe, healthy and in school, and to allow those students who compete to be able to continue competing. With that in mind, we are limiting student attendance to the extra-curricular events they are competing or performing in themselves.

For example, our drama students are performing the Fall play this weekend. Our cheer and dance teams are competing at cheer and dance competitions. Our basketball teams are playing basketball games. We also have academic teams, fine arts and many other groups who will compete or perform in their own events, we hope, as the school year continues.

But for now, and especially as the positivity rates are increasing at significant rates, we are limiting attendance at school events for the safety and protection of everyone involved. Only those students competing in the events may attend. The only adults allowed to attend are two parents/family members per athlete, or in the case of the play, performers.

School administrators are constantly evaluating the data and just as soon as they feel it is appropriate to make changes, they will.”

Is cheerleading recognized as a sport?

The National Collegiate Athletic Association (NCAA) does not recognize cheerleading as a sport. But as a member lead organization, that decision is really up to the colleges.

According to the NCAA’s website, “NCAA legislation allows a National Collegiate Championship or a division championship to be established in an emerging sport if at least 40 NCAA institutions sponsor the sport at the varsity level.”

The National Federation of State High School Associations (NFSH) is the “national leader and advocate for high school athletics as well as fine and performing art programs.”

NFSH writes the playing rules for high school sports, and cheerleading is not listed as a sport on their website.

13News is looking into what it would take for the NFSH to add cheerleading to their list of sports.

The Indiana High School Athletic Association does not have cheerleading listed as a sport on its website.

IHSAA told 13News that cheerleading falls under the Indiana Association of School Principals (IASP). When asked what it would take for IHSAA to recognize cheerleading as a sport, IHSAA said it would require a conversation between IASP and IHSAA.

The Indiana Association of School Principals (IASP) told 13News that as an association, they do not govern high school cheerleading in Indiana, but they are one of the organizations sponsoring cheer events and provide coaches with an opportunity to attend an annual conference.

“We do have guidelines in place for our competitions, but those then only apply to those teams that choose to compete with us during those competitions. We will continue to sponsor events for cheer squads so they can showcase their talents," said Todd Bess, executive director of IASP.

IASP said they are not involved in any discussion regarding what activities fall under IHSAA's guidance and parameters. But they are "happy to provide input to the IHSAA with regard to high school cheerleading activities if requested.”

IHSAA does have principals serving on its board of directors.

Blacketer and Moon said the school told them it will re-evaluate the decision and circumstances surrounding high school cheer during Thanksgiving break.

“The last time I put on my uniform was when we had pictures for basketball,” Blacketer said. “It was really heartbreaking that we were taking pictures for something we didn’t get to do.”

Moon said she doesn’t have any “resentment towards anyone. It’s just now every time I (wear the Quaker uniform) it makes me really sad. It used to make me really happy and I just hope it can make me happy again,” she added.

Both Blacketer and Moon said they wish there had been more transparency on who made the decision to postpone in person cheer, a question 13News posed to the school corporation but the school did not answer. The students also said they wish they had been given an opportunity to offer possible solutions for how to cheer while still prioritizing the health and safety of everyone in attendance.