Butler has a new live mascot and while we don't want to start any fights, he looks like the goodest boy of them all! 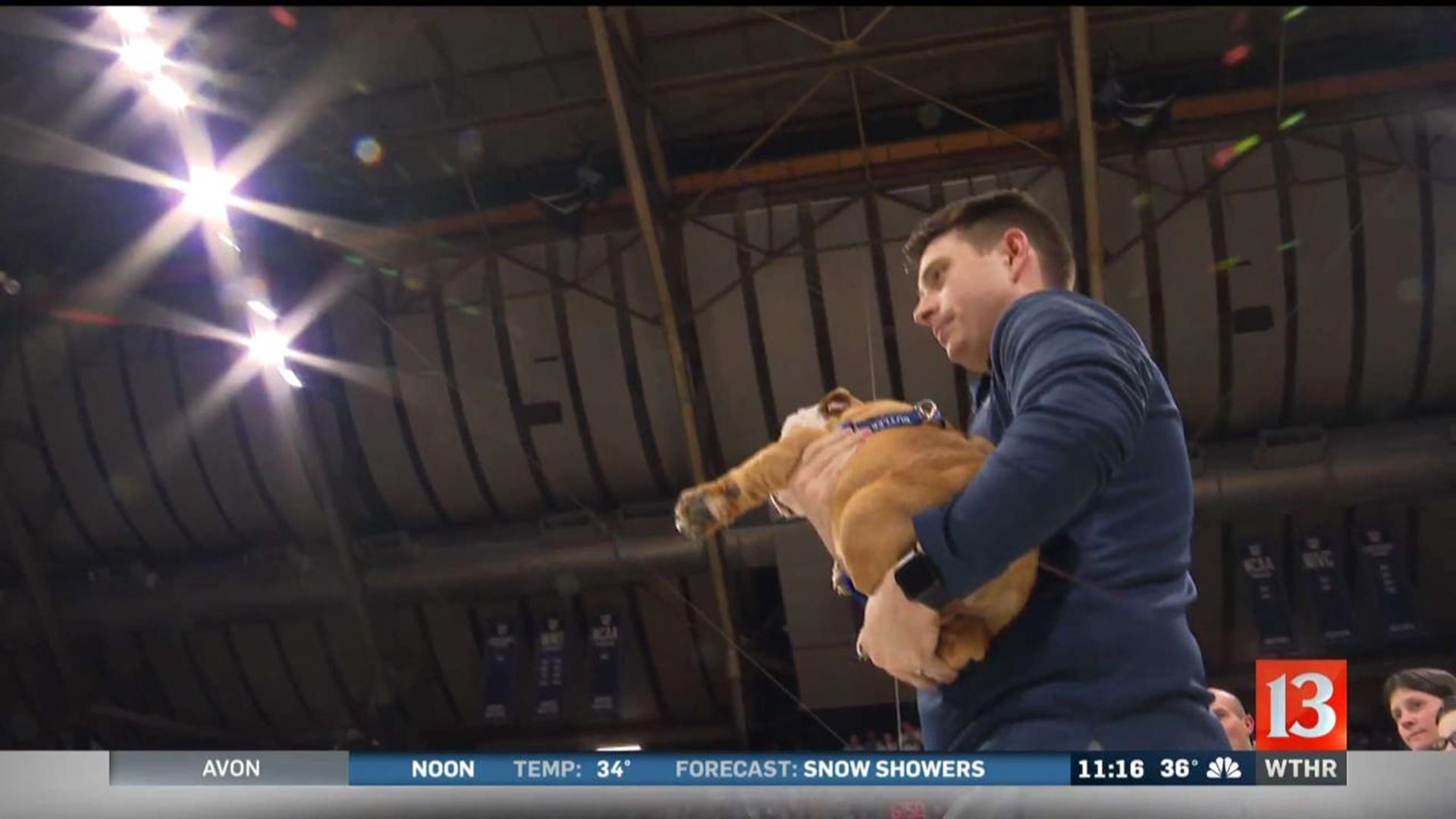 INDIANAPOLIS (WTHR) — Butler has a new live mascot and while we don't want to start any fights, he looks like the goodest boy of them all!

Butler Blue IV is a 12-week-old English bulldog. He had his first assignment in Hinkle Fieldhouse Friday against Marquette.

I’ve just been given my first assignment. I’ll see you all at Hinkle Fieldhouse on Friday! pic.twitter.com/MS2v2XBO6w

The new mascot received a loud ovation from the sell-out crowd before the Bulldogs faced Marquette. He even got the "Simba" treatment, with his handler Evan Krauss holding him up just like that moment from "The Lion King."

Blue IV is a local pup who was the only male in a litter of three at Fall Creek Place Animal Clinic. He may still be only a few pounds of brown and white rolls, but he's already a Butler fan.

"He is 12 weeks old and I got him about six days ago. So he's learning a lot but he's learning quick. And he's already 20 pounds. Yes, he's a big guy. He'll grow about a pound a pound-and-a-half a week until he gets full grown around 8-10 months from now," said Krauss.

In his introductory letter, he said he stuck his head out of his incubator at just 2 weeks old to watch the Bulldogs play on TV, and when the opposing team was announced, he started barking.

"He's a little feisty as you want a mascot and a bulldog to be, but he's also really sweet, loving and kind," Krauss said. "So when we have him on the sofa at home, he's not going to be next to you. He's going to be on top of you."

Students, staff and faculty will have the chance to met Butler Blue IV on campus Friday prior to the Marquette game.

Training for the games as the official mascot is already underway.

"First off, we do the puppy socialization that all dogs should go through - get him used to other pups and people and situations. But his is just a little bit more amplified so, we've been playing the Butler War Song in our apartment pretty loud," Krauss said. "We've been dribbling basketballs and getting him used to a bunch of the different smells and things he might run into in a game day situation."

Blue IV will train under Trip (Blue III, the current mascot) until he retires at the end of the academic year. Trip's handler, Michael Kaltenmark, helped get Krauss and Blue IV ready for the job.

Kaltenmark recently received a kidney transplant, but made sure he was there when Blue IV was introduced.

"I feel really good. I think probably better than expected, this soon since my procedure. But I feel great," he said at the game. "The doctors probably aren't going to be happy that I'm here right now and I'm trying to stay away from the crowds. It's slip in and slip out, sort of deal. But I want to be here for this night, this moment."