KRAVITZ: Who inspired whom? Purdue pens a fairy tale, throttles Ohio State with Trent in the stadium

On Friday, Tyler Trent, the bespectacled Boilermaker sophomore who is fighting terminal cancer, thought there was no way he would make it to Saturday's Purdue-Ohio State game. 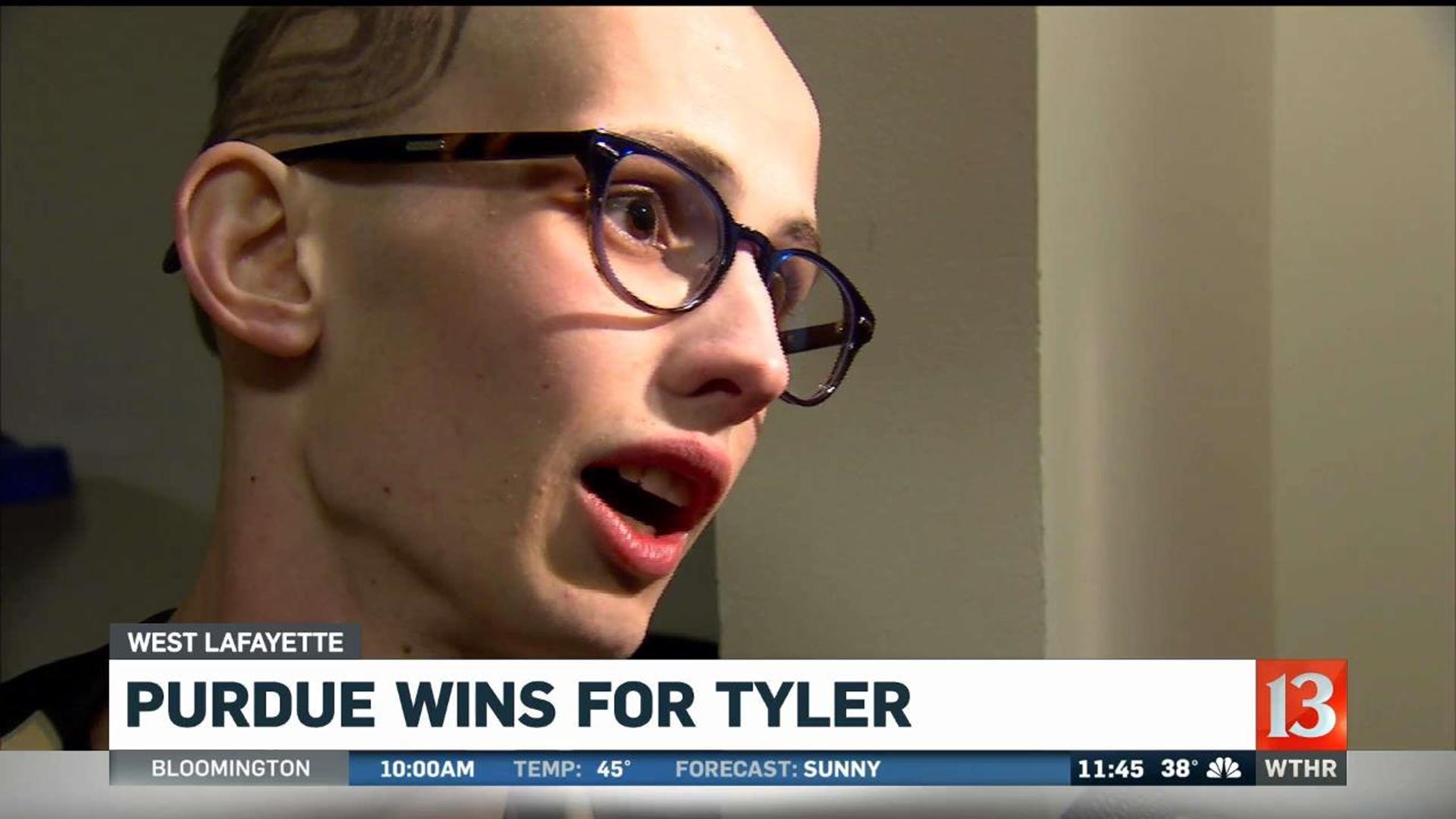 WEST LAFAYETTE, Ind. (WTHR) - The Friday before the big game between Purdue and Ohio State, Tyler Trent, the bespectacled Boilermaker sophomore who is fighting terminal cancer thought there was no way he would make it to Saturday's game. He was back in his Carmel home, under hospice care, and everything was going wrong.

"Throwing up all day,'' he was saying late Saturday night. "And earlier in the week, I had surgery to repair my nephrostomy tubes (which help him get rid of bodily waste). All I kept thinking was, `No way. There's no way I'm going to make the game.' ''

Nearby, his mother, Kelly, is nodding in agreement.

"It's a miracle he's here,'' she said, acknowledging her brave son.

Then Saturday rolled around, and incredibly, Tyler felt strong. The nausea was gone. The debilitating headache was gone. He had strength and energy, which is a rare and wonderful thing for a young man who is in the throes of a bout with bone cancer. "Good to go,'' he texted some friends the afternoon of the game.

Now, it was more than an hour after the game, an epic 49-20 Purdue upset over No. 2 Ohio State, and he is telling me how good he is feeling. He is in his wheelchair, sitting in the post-game press-conference room, posing for pictures and talking to the assembled media, and he feels normal. "Honestly, I know it's been a crazy day, but I really feel fine right now,'' he said. "I think just being here and being around so many people who've shown me so much love, that helps a lot, and then to see what my Boilers did tonight…''

Ah yes, what the Boilers did tonight (well, actually, last night): It was inspired. It was brilliant. And, like Trent himself, they got off the mat after three opening-season losses and won their fourth straight with a beat down of No. 2 Ohio State.

There was nothing fluky about it, no use of smoke and mirrors or sleight of hand involved in Purdue's emphatic 49-20 takedown of No. 2 Ohio State Saturday night at Ross-Ade Stadium. Sure, there was a fake field goal call by Purdue's bloodless head coach, Jeff Brohm, a call that resulted in a first down and ultimately a touchdown. But look at the score, the one-sided nature of this game, the way the Boilers controlled things until a late Ohio State flurry, and you'll see that on this night, Purdue was the vastly better team.

Understand what I just wrote: Purdue, 3-3 coming into the game, losers to Eastern Michigan at home Sept. 8, they throttled the second-best team in the nation. No funny bounces, no game-altering officials' calls, none of that. This was a butt kicking of a team that came into the game with the No. 2 offense in the nation and a quarterback, Dwayne Haskins, who was in the top five in nine of 11 statistical categories. Ohio State had the nation's No. 2 offense, averaging 556.0 yards per game and had amassed north of 500 yards of offense in six of seven games.

Nobody had stopped the Buckeyes; nobody had come close.

Until Purdue and Tyler Trent showed up.

“I’m not sure I’m qualified to make the opening statement.” pic.twitter.com/doW8RPTtjY

Until a late Buckeyes' flurry of two relatively meaningless touchdowns, they throttled the Bucks.

Maybe it is and maybe it isn't, but what we know for sure is this: It was a whole lot of fun. And beyond that, it was moving, the fact Trent was able to fight through the pain and the fatigue and watch his beloved Boilers pull off one of the program's biggest upsets ever, and surely the greatest upset of the Jeff Brohm Era.

How much has Trent meant to this campus? During the game, fans usually scream "IU Sucks!'' but with the aid of a social media campaign, they screamed instead, "Cancer sucks.'' Up in his private suite, Trent smiled. Just as the Carmel sophomore has supported his school these past few years, this time, they had his back. "That was cool,'' Trent said. "We heard that and it was awesome.''

Kelly, his mom, called the game "medicine'' for her son. For just less than four hours, Purdue's football team captivated and inspired him and the sellout crowd, playing the game of their lives against a team that was favored by 13 ½ points.

It was David Blough, who replaced Elijah Sindelar early in the season, playing flawlessly once again, getting the ball into the hands of his play-makers all evening. "I want him to be great,'' Brohm said later with a smile. "And he's almost great.'' On that score, Brohm is wrong. On this night, Blough was great.

It was Rondale Moore, the electric true freshman who drove Ohio State to distraction, producing a litany of game-wrecking plays, again, that made you wonder if a Heisman Trophy is in his long-range plans. "Wow,'' Blough said of Moore after the game. "That guy is special. I mean, really special.''

It was Antonio Blackmon, the Purdue cornerback, who broke up three would-be touchdown passes in the end zone. Understand, this is a defense that came into the game ranked 92nd among 129 teams, and while Ohio State did move the ball with some alacrity, they stiffened in the red zone. Four times Ohio State moved deep into Purdue territory; they came away with six points.

It was Brohm, who decided after three losses to start the season that he would return to his aggressive roots and has generally done a masterful job of getting his team up off the mat. Faced with a chip shot field goal that would have put the Boilers up 10-3, Brohm dialed up a fake, and holder Joe Schopper ran around the left end for a massive first down that would ultimately end in a Purdue touchdown. "We knew we needed more than field goals to beat this team,'' Brohm said.

It was Markus Bailey, the Columbus, Ohio born-and-bred linebacker, who intercepted a late Haskins pass and ran it back for the touchdown. Think that didn't mean a whole lot for a young man who couldn't get a sniff from his hometown team?

It was D.J. Knox, who runs so violently and passionately, you wonder if it's against the law. Twice, he took handoffs and exploded through the line, going the distance on two long touchdowns.

It was, well, everybody, including the crowd and more specifically, Tyler Trent.

Now, he was sitting in the press conference room, surrounded by his family, Trent wearing a Purdue blazer – "I got it at the Purdue book store, actually'' – and a Purdue ski hat, and he looked and sounded like he had no desire to return home to Carmel. Before the press conference, Blough walked over to Trent and embraced him. "I love you, brother,'' he told Trent. Later, when everybody was breaking up to go their own way, Blough reached out again to Trent. "You have no idea how big an impact you had on us tonight,'' he said. "No idea.''

Fairy tales, by their nature, aren't true. But this one was. A young man, fighting what the battle of his life against this pernicious cancer, finds the strength to support his team on a night when they are playing one of the best teams in the nation. And that team responds with its greatest performance since they beat another No. 2 Ohio State team in 1984.

More, they did it on national TV with millions of eyes glued to the set. Think that will help recruiting? You'd better believe it. "We've shown people you can come to Purdue and win football games like this,'' Brohm said.

This game also continued Purdue's mysterious mastery of Ohio State in Ross-Ade Stadium, where the Boilers have beaten the Buckeyes five out the last eight times they've made the trip here from Columbus.

I asked Trent, a former writer for the school newspaper, the Exponent, what he might write off this game if he was still a journalist.

"I don't know, I would have been too excited to write,'' he said, smiling. "Maybe just dot, dot, dot and leave it there.''

Now Trent will return to Carmel, where he is in hospice care, fighting the good fight every day. He's got an entire community rooting for him, just as he rooted his Boilermakers on to victory Saturday night. Hard to believe, earlier in the week, he had surgery to repair some nephrostomy tubes, and Friday, he was throwing up all day. But now he was here, and he was looking as good as he's looked in a very long time.

His brothers had just pulled off the epic upset.

"I feel really good,'' he said at the end of a very long and trying day. "Best I've felt in a while. I think the guys (the Purdue football team) had something to do with that.''

There will be better days for Purdue, a team that has gotten off the mat and is now poised to reach a second straight bowl game under Brohm. The hope, the prayer, is that there will be more good days now for Trent. He didn't throw or catch a pass, make a block, make a tackle, but on this day, Trent was Purdue's most valuable player.