KRAVITZ: Former Hoosier Todd Jadlow tells his story of Knight’s abuse and his road back from addiction 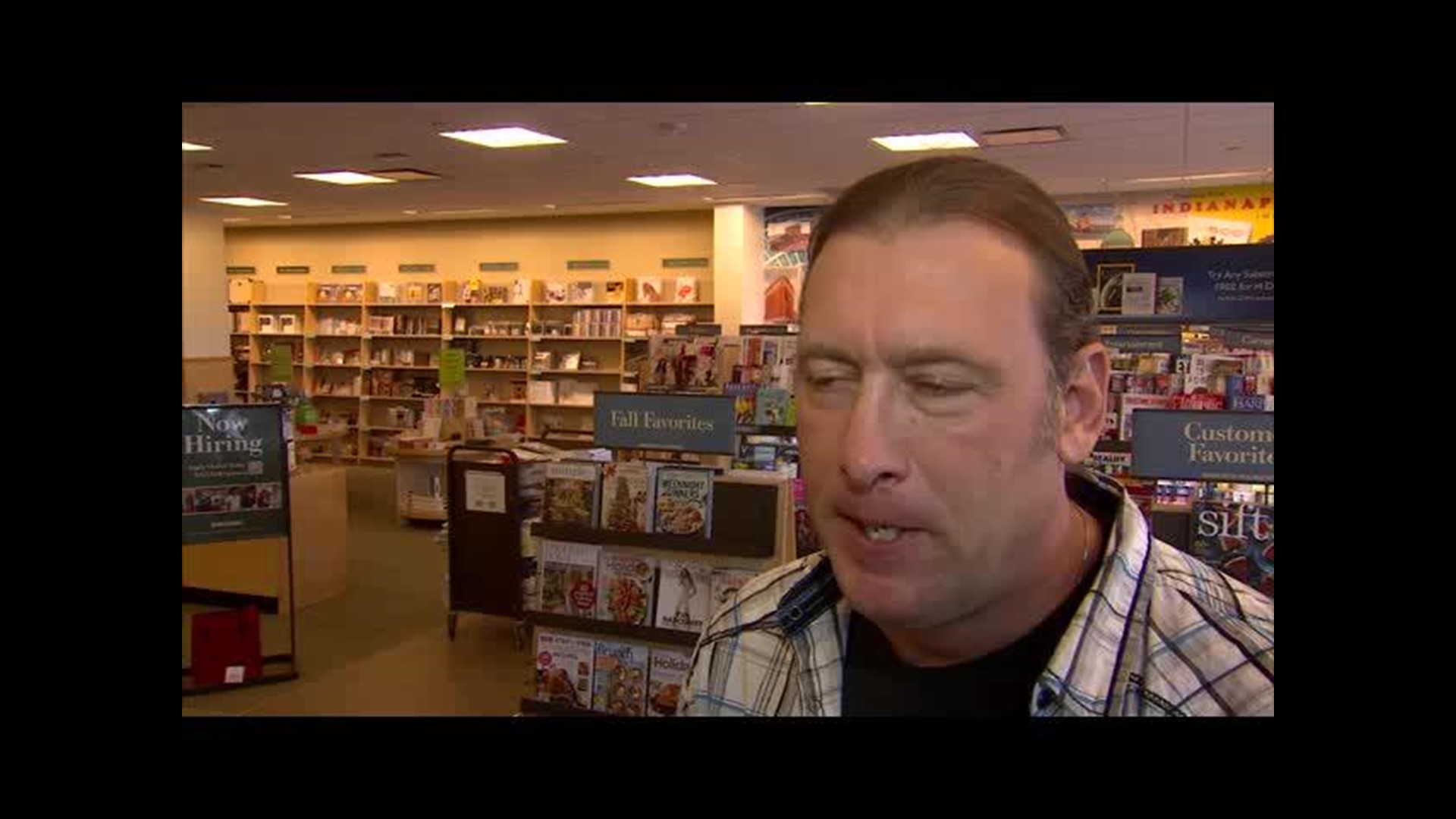 BLOOMINGTON, Ind. (WTHR) — Most of Todd Jadlow's new book, "Jadlow: On The Rebound," is about the former IU basketball player's horrifying and ultimately redemptive journey, about his headlong descent into a life of drugs, alcohol and finally incarceration. It shares, in stark and shocking detail, how far the former Hoosier fell, losing everything including his freedom, how his downward spiral had him thinking about suicide and praying every night that he wouldn't wake up the next morning.

That's not the headline, though, in the recently-released book he co-wrote with former Indianapolis journalist Tom Brew.

This is the headline: Jadlow alleges that former IU basketball coach Bob Knight physically and emotionally abused him and other players.

And that, Jadlow said recently, was just a partial accounting of Knight's excesses.

"If he did those things today," Jadlow said, "he (Knight) would be in jail."

“I wanted to be honest about all of it, my time at Indiana, everything”

Now, sitting here at Nick's with his daughter, Adriana, and a reporter, Jadlow knows there's going to be significant backlash. The Knight true believers will not accept Jadlow's version of events, or they will demean him as a recovering alcoholic and drug addict who is merely telling lies in order to sell a book. They will criticize him for lifting the curtain on Knight and life inside the IU program. He knows all of this. And he's ready.

"It's definitely going to be interesting," he said. "But the reason for this book was to be completely honest and transparent. I wanted to tell the whole story of my life, tell people all the worst things I've done in my life and how I've hurt people, especially the ones I love. I wanted to be honest about all of it, my time at Indiana, everything."

And yet, he still reveres Knight. After all of that, he still sees Knight as a father figure. It's complicated, to say the least.

"I'm a Knight guy, I'm proud to have played for him and love him like a father; let's not mistake that," Jadlow said. "But this was the life we led when we were playing for him."

"A lot of who he is, I took a lot from. Right or wrong, I took a lot from him. Some aren't good, like holding resentments, like if you've done me wrong once, I'm done with you. That's not right. Loyalty? You can be loyal to a fault. It's misguided, like me not coming back to the (1987) championship reunion (in 2011) out of loyalty to Coach Knight. In hindsight, I deeply regret that decision."

During the writing of the book, Jadlow and Brew attempted to reach out to Knight to give him the opportunity to respond, but they were told by an intermediary that he was not interested. WTHR also called and e-mailed a Knight confidante to offer a chance to share his side of the story. We were told that Knight would not be offering a response.

Again, though, the Knight material is the headline, the stuff that will end up making national news. The greater story, the one Jadlow hopes won't get lost in the Knight conversation, is the one about his decline into alcoholism, drug addiction and incarceration.

This is the CliffsNotes version of that story.

Adriana Jadlow, Todd's 20-year-old daughter and a sophomore at Kansas State, is picking at a turkey burger, and the memory comes out of thin air.

"You know what I remember?" she said, speaking to her father. "The plate. Dad, remember that plate with the big chip in it that was always around the house? I never knew what was on that plate; I thought maybe it was flour or something. I had no idea. But then one day, I figured out that it was cocaine and a straw. I remember going near it one time to look at it, and you went crazy telling me to leave it alone. That's when it all started to make sense to me."

Todd looked up from his food and looked horrified, mortified. What have I done to my children?

Jadlow was a relatively straight laced kid growing up in Salina, Kansas. But he didn't live in a happy home, where he said his parents, his teachers, everybody told him he'd never amount to much of anything. He was also hazed and bullied unmercifully, largely because of a facial tic that had him wondering if he was suffering from Tourette's Syndrome.

He tried alcohol once when he was 14 – "It made the pain go away," he said – and he tried marijuana once, although the latter did nothing for him. While at IU, he largely behaved himself, in great part because Knight had no tolerance for that sort of thing.

But after his senior year, he was preparing for the NBA Draft when a teammate at the time called him. "Come by my apartment," he told Jadlow. "I've got something for you."

In fact, while driving to Bloomington North High School Friday morning to speak to a class, Jadlow stopped by that old teammate's apartment and pointed it out to Adriana. "That's where it all began," he told her.

“I felt like I could jump out of the gym”

Jadlow saw the cocaine, a drug he'd never seen before, then told himself, "This is going to be a one-time thing. Just once. Never again." So he snorted a line. He snorted more lines. He loved the euphoria, the sense of invincibility, the way the pain seemed to dissipate. Later that night, he walked to Assembly Hall, where he had a key to the building and the bank of lights, then started shooting hoops with a fraternity buddy. "I felt like I could jump out of the gym," Jadlow said.

"Man, I liked it. Something about the euphoria. It was 'Todd's secret.' A walk on the wild side, and that fascinated me. It enticed me and drew me in."

Now, talking to the high school students this past Friday, Jadlow was illustrating how that one-time-thing became his life – and his ultimate downfall:

Jadlow went on to play professionally overseas for 12 years, and despite his lifestyle, he had plenty of personal and team success. But the drinking was worsening. The cocaine use was completely out of control. "It got to the point where I cared more about the party afterwards than I did the actual game," Jadlow said. "Cocaine was my prize. How crazy is that?"

During his time playing basketball in Argentina, he befriended a man who happened to be a general in the Bolivian cocaine cartel.

"At one time, I had 20 kilos in my apartment, 20 bricks of coke," he said. "That scared me. It was the first time I ever thought that I'm in over my head. This guy starts telling me stories, tells me, 'If you need anybody taken care of, don't worry, we'll take care of it.' I'm thinking, 'What am I doing? This is total lunacy.'"

It didn't diminish his taste for the drug, or for alcohol, or for the lifestyle that he had created. By 2013, he was completely out of control, then finally hit rock bottom.

"The judge told me if I'd gotten four DUI's in six months, it meant I'd probably driven drunk 4000 times," Jadlow said. "But my luck ran out and it was time to pay."

"I lived with my dad my sophomore year of high school," Adriana said. "I didn't understand what was happening, why he was starting to take things out on me, why he would say, 'I want to kill myself.' I was oblivious to the fact he was drinking until it got really bad and I moved out. After that, I hated him, didn't want to talk to him, wanted nothing to do with him. Then Dec. 11, 2013, the day he got arrested, I had just finished a big rivalry basketball game, and I looked at my phone and saw all these messages. 'Are you related to Todd Jadlow? Is Todd Jadlow your dad?' And then one of my best friends sent me a picture of him on the news with him being arrested."

It still kills Jadlow that on senior night, all the parents accompanied their daughters on the court to be celebrated. All the parents, except one. Jadlow was in jail. Even recounting it now, in front of the Bloomington North students, his voice cracks with emotion.

Remember that 2-year old who was in the back seat when Jadlow was popped for going 121 miles per hour while intoxicated?

"I didn't see her for 15 months, and then I'll never forget this, I finally got to see her under a supervised setting," Jadlow said. "As my daughter walked in, she hid behind the lady who was proctoring the visit and I heard her say, 'No Dad, no Dad.' She didn't even want to see me. I could see this look in her eyes -- 'What did you do? How could you abandon me like that?'"

Even still, it took Jadlow time to look in the mirror and see who he had truly become. For months, he denied that he had a significant problem that was going to someday kill him and cause more pain for his family. He was still Todd Jadlow, the pro basketball player – not one of these losers who end up behind bars.

Over time, though, he began to see the light.

"I'll never forget sitting in jail and I got down on my knees," he said. "I grew up in a Catholic family, but somewhere I lost my way, lost my higher power. I said, 'God, either show me a better way to live or take me the hell out of here.' At almost the same time, I got a letter from Adriana, saying, 'God never gives his soldiers battles that they can't handle; he saves his toughest battles for his warriors.' That's when I started my relationship back with Christ, and started to understand what I'd done and the damage I had caused. And I knew there was a way to recover."

Jadlow did a year in jail, then spent three months in a work-release program and three months in a halfway house, all while being under probation. He said he has been sober for three years, and now wants to dedicate all his time and efforts to speaking to groups, to schools especially, all in the hope that those kids don't make the same mistakes he did.

And yes, there's something selfish about that undertaking, too, which he acknowledges.

"It's very therapeutic for me to tell my story," he said. "I get as much out of it as they do. Talking about it keeps me on the right path. If I'm going to talk the talk, I've got to walk the walk. I don't want to be a hypocrite or a fraud.

"I hate the word relapse, man, hate it. In my mind, I still have that thought that there's nothing I can't do if I just put my mind to it. They say that on average, it takes seven rehabs before you actually get sober. But I'm not going to do it (relapse). I know how one decision to do one thing will lead to the next and the next and the next, and next thing I'll be right back to where I was and I'll lose everything."

He smiled. It was a peaceful smile.

"I'm never going back to that place."