KRAVITZ: After almost 19 months, Ballard says the magic words with respect to Luck: 'Good to go'

Get ready for Luck-a-palooza, also known as Colts training camp, which will be held at the brand-spanking-new Grand Park facility here in Westfield starting next week. 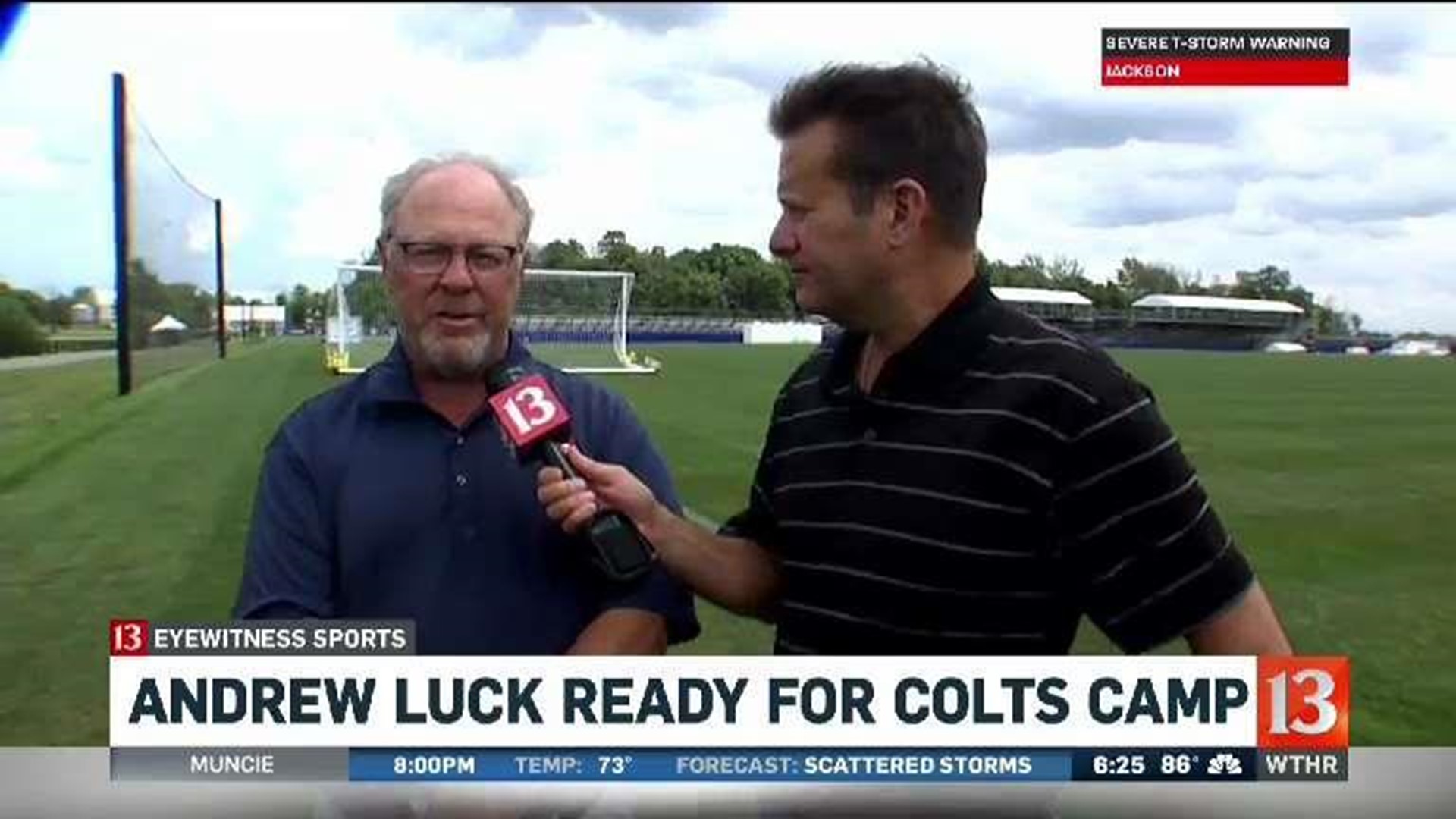 WESTFIELD, Ind. (WTHR) — Get ready. Get ready for Luck-a-palooza, also known as Colts training camp, which will be held at the brand-spanking-new Grand Park facility here in Westfield. Get ready for breathless daily updates – Andrew underthrew a receiver on an out route…Andrew's ball wobbled on the way to Jack Doyle on a seam route…Andrew looked like the 2012-2014 Andrew…Andrew sneezed, but it didn't appear to impact his right shoulder.

Chris Ballard, the Colts general manager, is ready, but how could he be anything but ready? He's been living this Luck psychodrama, day in and day out, for the entirety of his young tenure in Indianapolis. He's been answering question after question after question, and to his credit, he's been one of the few Colts in a leadership position who has never misled the media or, by extension, the public, on the state of Luck's much-discussed right shoulder. While owner Jim Irsay was insisting Luck would be back sooner rather than later – I believe he was misinformed, but did not purposely misinform the public – Ballard has remained patient and consistent, telling everybody not to get too excited or ahead of themselves until Luck was fully healed.

He made it clear, though, on Friday, that Luck is completely ready to go, completely healthy, and will take all the first-team quarterback reps at training camp, which will open here Thursday. Luck is scheduled to take some days off during camp – it sounds like one day a week – but when he's out there, there will be no limitations, no governors, no pitch counts.

What began at June minicamp with a limited number of soft tosses has morphed into full throwing sessions recently with Colts receivers out in Palo Alto, Calif., and Ballard has liked what he has seen.

"I've seen enough throws that I know he's throwing the ball pretty well," Ballard said after the Colts gave the media a tour of its sprawling new training-camp facility. "I thought the first day (of June minicamp), there was one ball on the swing pass, 'OK, there you go, he really let it go.' The next day, there were four to five balls he really let go. I think that'll be the case when you get to camp."

The next step – his biggest step to date – comes Thursday, when the team has its first camp practice. In theory, he's not completely out of the woods physically; what happens when he ramps up his workload? Will there be soreness? Will there be pain or inflammation? Some of us won't buy in completely until he plays some regular-season games and performs the way he did when he came out of the gate looking like the NFL's next generational quarterback. For now, though, it feels like our nearly 19-month-long civic nightmare is over.

"I think we'll get questions until he lines up and plays again and plays high-level football again," Ballard said. He smiled. "I can see the panic the first time he throws an interception. I can see it. It's just part of what we do. He understands it. He gets it. (You) know what's been fun and neat is watching his growth as a man and who he is. I've watched his confidence grow…"

For now, Ballard and head coach Frank Reich aren't quite sure how much Luck will play in the preseason, although it seems to me it makes perfect sense to get him preseason reps in each of the first three games, including the preseason opener at Seattle. He hasn't played the game in nearly 19 months. He needs to knock off the rust, needs to see and feel the game once again. We saw this in 2008 when Peyton Manning came back from a knee infection and missed some of the summer and all of the preseason. It wasn't until almost midway through the year that Manning found his game, and went on to have an MVP season.

If Luck is healthy, there's no reason to baby him now. Time to jump into the deep end.

How fine, that will be determined as camp moves on.

"Andrew is an elite competitor and a pretty rare one," Ballard continued. "I think we've seen that during his career. I think it's more of playing live football again. I don't think there's any mental restrictions. It's more of getting the live reps versus live people. That's the thing, getting used to moving in the pocket. All those are thing you have got get used to."

When Luck and his teammates report Wednesday, they will be greeted by a training-camp Taj Mahal. Grand Park has three outdoor fields and a huge indoor facility should weather become an issue. Players and staff will stay in a nearby hotel, so the Colts will get the experience of having camp out of town while still being close to home. Best yet, fans will once again have a chance to rub elbows with the players, get autographs and the like, something they didn't experience last year when the Colts had camp at the West 56th Street facility.

It's a new era for the Colts, who are signed to train at Grand Park for the next decade. And it's a re-start on the Luck Era, which started with such fanfare and promise, only to be derailed by injuries. He's missed 26 games since 2015. Ballard said Wednesday he is especially bullish on the offensive and defensive lines, but there are lots of questions – questions at running back, at wide receiver, at linebacker (like, who's going to play?), in the secondary. There's a reason at least one national publication, USA Today, whose writer, Nate Davis, pick the Colts to be the worst team in the league at 2-14.

Listen, if Luck stays healthy and returns part-way back to form, this team will win six games by showing up. But there are holes, massive holes, and Ballard can only hope that some of his young players will grow into their new responsibilities. This is a team that needs a whole lot to go right to be competitive in the rapidly improving AFC South but having Luck back is a massive start.

It's all anybody needed to hear.

Some other Colts notes:

I asked Ballard if the Colts have decided yet whether to fine or suspend any player who stages a protest during the national anthem. This comes one day after the Dolphins' plans to fine and/or suspend a player for four games was leaked.

"We've had internal meetings, discussions with our players, and I'll tell you, I love to listen; everybody sees the world through a different lens, all different backgrounds and we all see the world differently," he said. "And it's been exciting and interesting to talk through this with our players and ownership and getting on the same page. We're going to wait. Our players want to do the right thing. I thought last year, we stood (arm in arm) together and went into the community, started up the (community) fund, steps in the right direction.

"Look, we want to stand and honor the flag and what it stands for. But we're going to wait for the league and the PA (Players Association) and see what the final resolution is and make a decision internally."

Want more Kravitz? Subscribe to The Bob Kravitz Podcast on iTunes, Google Play,Stitcher or TuneIn. If you have a good story idea that's worth writing, feel free to send it to bkravitz@wthr.com.