VERIFY: Has the NAACP received reports of White nationalists planning to kidnap Black males this weekend?

For the second time in a few months, warnings of violence against Black males by white supremacist groups are circulating social media. 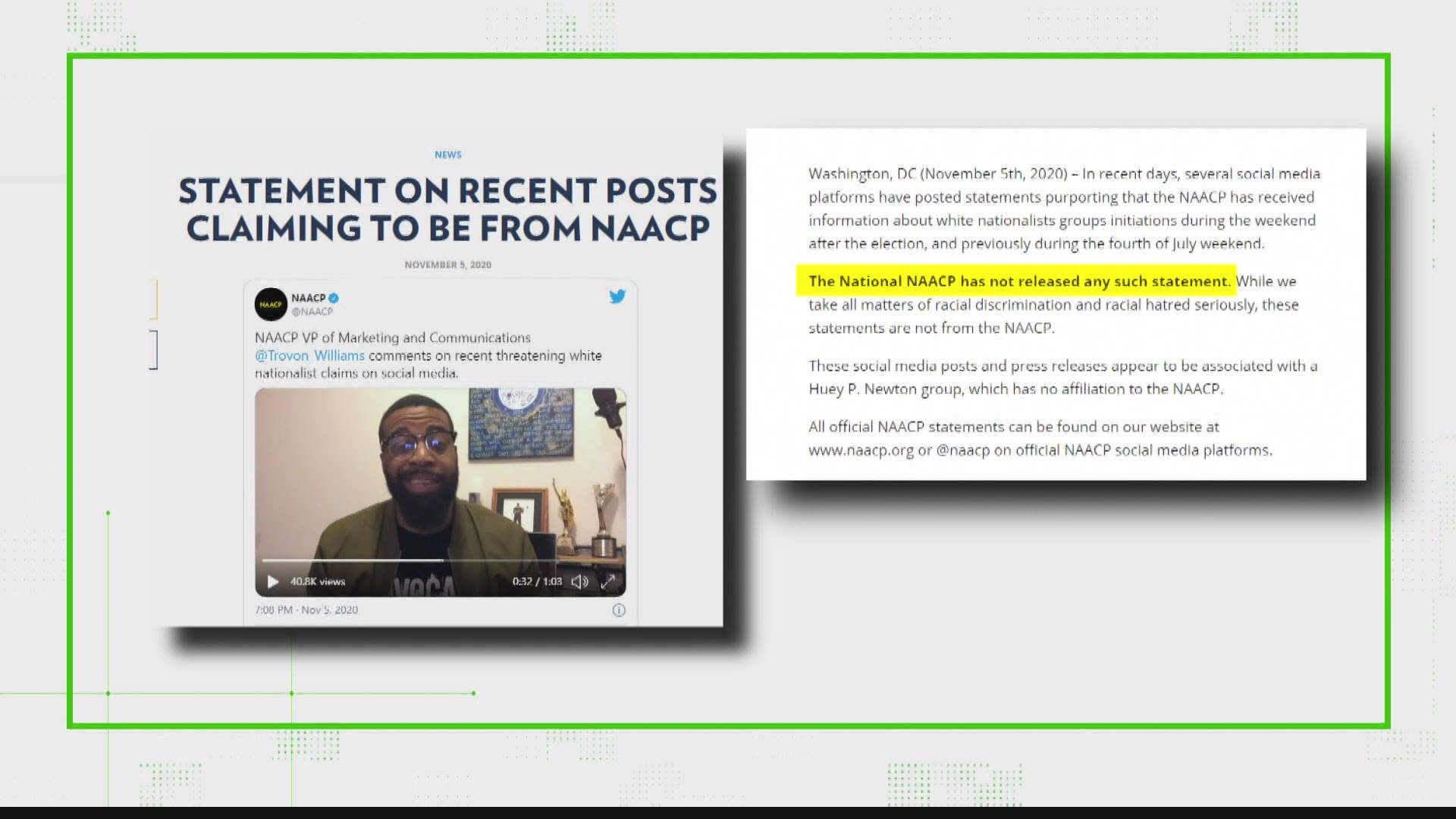 INDIANAPOLIS — In the wake of mob violence by supporters of President Trump at the U.S. Capitol, 13News viewers are sharing concerns about a social media post that claims more violence – specifically against Black males – is imminent.

The online claim states the NAACP has received "credible information" that some white nationalist groups have initiations this weekend and will be looking to snatch Black men and boys to harm or kill them. The claim, which is circulating widely on social media, warns "Do not let your sons go out alone." It urges caution and diligence due to the threat.

13News has verified the information is NOT true. Our sources are the local and national chapters of the NAACP, Indiana State Police and the Indianapolis Metropolitan Police Department.

The online claim first appeared on Facebook this fall, and it quickly caught the attention of the NAACP. On Nov. 5, its national office issued a statement saying the NAACP does not have credible evidence about this type of threat.

"In recent days, several social media platforms have posted statements purporting that the NAACP has received information about white nationalists groups initiations during the weekend after the election, and previously during the fourth of July weekend. The National NAACP has not released any such statement," the statement said. "While we take all matters of racial discrimination and racial hatred seriously, these statements are not from the NAACP. These social media posts and press releases appear to be associated with a Huey P. Newton group, which has no affiliation to the NAACP."

This month, after thousands of people stormed the U.S. Capitol, the same claim of violence resurfaced online. In response, the NAACP's national headquarters posted a video, reiterating the organization is not warning about a specific threat involving white nationalists targeting Black men and boys.

"The NAACP has not been afforded any such information at this time," said NAACP vice president of communication Trovon Williams. "The NAACP's position is very, very clear. We will not be divided. We will not be fearful. Stay home. Stay safe. Take care of you and your family."

VERIFY also spoke with a vice president of the NAACP's Indianapolis chapter. Tyjuan Garrett told 13News the local office has not received any specific threat toward the organization or its members. He also encouraged the public to check directly with the sources cited in online posts when in doubt about the message being shared.

"If there's an alert that's coming from the NAACP, it will generally come from our national branch. So we always suggest going to the NAACP.org national website and checking for any statements we have there," Garrett said.

13News also checked with Indiana State Police and IMPD. Both law enforcement agencies are watching for potential post-election-related violence over the next week, and both urge the public to contact police to report possible threats. But both agencies say they have received no information to suggest white nationalist groups will be targeting Black males this weekend as part of initiations.

"We are monitoring intelligence about anything coming up, especially as the inauguration approaches. But as far as we know, there is nothing on our radar about that," said IMPD spokeswoman Samone Burris.

To report a crime or a plot to commit a crime, IMPD encourages the public to call Crime Stoppers at 317-262-TIPS.

If you hear or see something you'd like the 13News VERIFY team to fact check, send us an email at VERIFY@wthr.com.