VERIFY: Did Nancy Pelosi file a lawsuit against Americans?

A viral photo shows a lawsuit supposedly filed by Rep. Nancy Pelosi against American citizens, allegedly found on her stolen laptop during the U.S. Capitol riot. 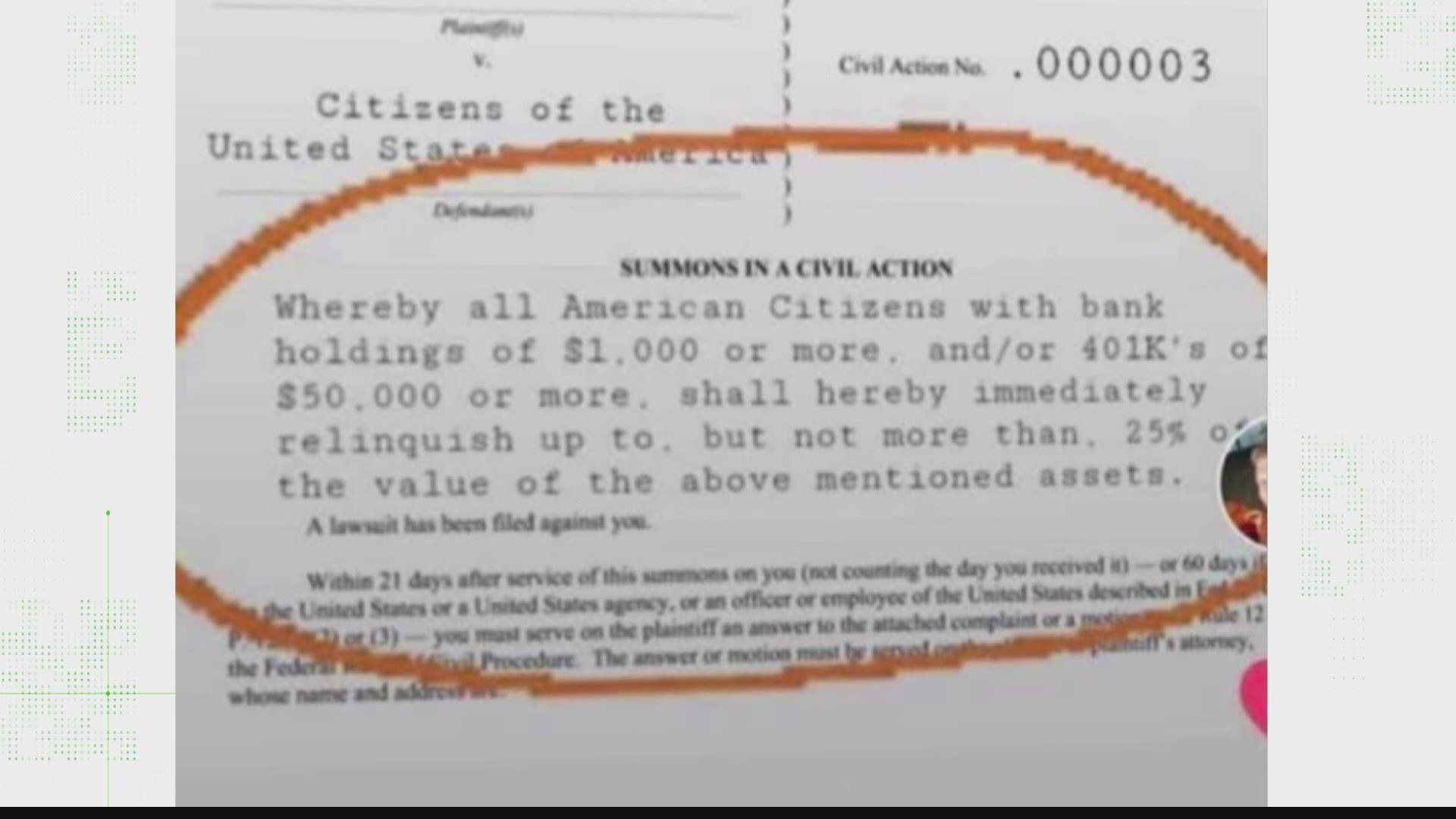 INDIANAPOLIS — Posts across social media claim to show one page of a lawsuit found on the laptop stolen from the office of House Speaker Nancy Pelosi during the January riot at the U.S. Capitol.

The image purports to show a lawsuit filed by Pelosi (D-CA) against the American people and demands they relinquish up to a quarter of bank accounts and retirement accounts that meet certain financial requirements.

Several posts of the image also include a message that says, “This is what happens in Communist countries. They come for your bank accounts.”

Is the lawsuit real?

No. There is no such lawsuit. The image is fake.

This image, and sometimes the message with it, appeared on many platforms and was seen by thousands of people. Our VERIFY team noticed that occasionally other people would comment on that the image was fake and would offer reasons why. In some of those cases, the account that made post commented that even if this image is fake, it is what could happen or that they were scared it might be real some day if not now.

The key text in the image indicates that Pelosi is trying to force American citizens to turn over their money to the government. It reads, “Whereby all American Citizens with bank holdings of $1,000 or more, and/or 401K's of $50,000 or more, shall hereby immediately relinquish up to, but not more than, 25% of the value of the above mentioned assets.”

The message text that sometimes goes with the image reads, “This was found on Nancy Pelosi’s laptop. Do you understand the magnitude of what is going on?! This is what happens in communist countries. They come for your bank account. The financial system at hand currently will collapse and cryptocurrency will become the new currency. #facts – these people will not win. Only #GODWINS.”

VERIFY searched the indexes of all federal court filings in the United States. We used the Court’s PACER service (Public Access to Court Electronic Records) to check federal district and appeals courts and the search function on the U.S. Supreme Court site to search those cases.

Neither index listed a case by this name.

There are also several clues that the image is fake in the way the form is filled out.

Credit: Facebook
A photo circulating on social media allegedly shows a lawsuit filed by House Speaker Nancy Pelosi against the American people. It's not true.

The page does appear to be based on a standard Summons in a Civil Action that is used in federal courts. It is form AO 440, and a blank version with boxes to fill in is readily available online.

There is no court known as the “United States District Court of the Supreme Court.” There are many federal district and bankruptcy courts, as well as appeals courts. The U.S. Supreme Court is typically written as “Supreme Court of the United States” at the top of court documents, as seen on this order issued in a case in February. The federal court system has a full list of courts online.

The case number listed is not in the format the federal court system uses for civil cases. Case numbers for district courts include a series of numbers and letters. A civil case would look something like this - 2:14-cv-123456-VZM – and include the letters ‘cv’ to denote a civil case. The Supreme Court and the appellate courts use a different format of numbers that looks more like this – 12-34567. The Loyola Law School at Loyola Marymount University has a page that describes how to understand the case numbers.

RELATED: VERIFY: Has the US Capitol ever been attacked before?

The posts claim that this is a screenshot from a computer stolen from the office of the Speaker of the House in the U. S. Capitol during the Jan. 6 riot. The date on this document is listed as Jan. 22, which is 16 days later.

In the lower right corner of the photo, it shows Pelosi’s name in the space that is supposed to be for the Clerk of the Court, who works for the court, not for the plaintiff in the case.

The VERIFY team can confirm there is no such lawsuit in the federal court system.