While 13News can verify some elements of the social media post are true, the meme lacks important context that renders its overall conclusion misleading. 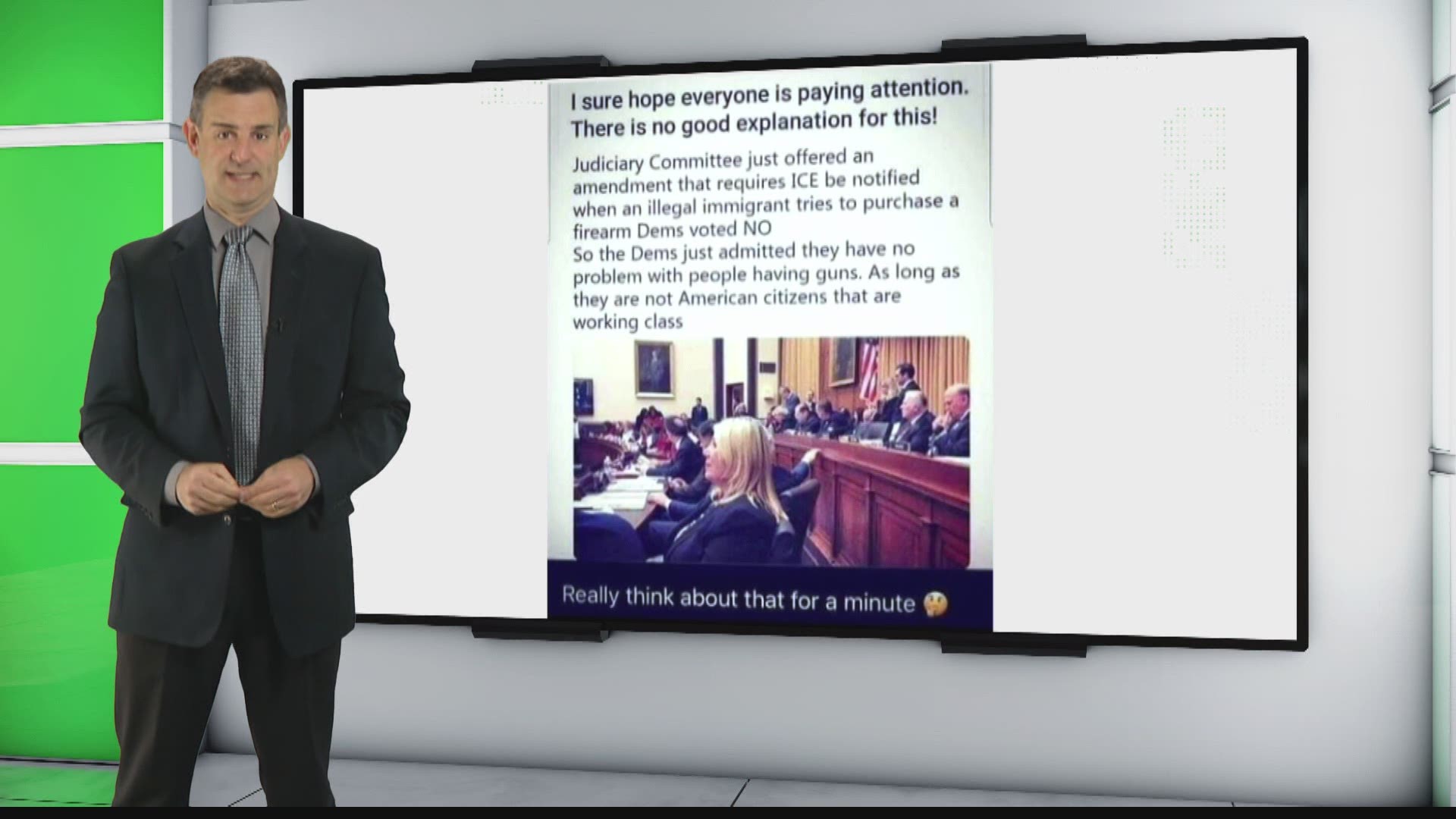 WASHINGTON, D.C., USA — Following mass shootings in Colorado and Georgia, many Democratic lawmakers are once again calling for tighter gun regulations. But did Democrats vote against a regulation to notify law enforcement when undocumented immigrants fail a background check?

Charles sent 13News a screenshot of a meme that has been circulating widely on social media. It states:

“Judiciary Committee just offered an amendment that requires ICE be notified when an illegal immigrant tries to purchase a firearm Dems voted NO So the Dems just admitted they have no problem with people having guns. As long as they are not American citizens that are working class” [sic]

13News VERIFY researched the meme to determine if the claim is true.

H.R. 8 (2019), debate in the House Judiciary Committee, and the House of Representatives Roll Call.

The meme, which has spread widely on social media and via email in March 2021, did not originate during the current gun control debate in Congress. It was first posted online two years ago, in February 2019, when Republican congressmen offered several amendment to House Resolution 8. That bill, introduced by Democrats, would have required tighter background checks on gun sales.

According to research by fact check website Snopes.com, the meme was originally posted by a Twitter user known for promoting unfounded conspiracy theories and whose account has since been suspended by Twitter. The photo used in the meme matches one used in a Feb 2019 post by Republican U.S. Rep Ben Cline (VA), who wrote:

"I just offered an amendment in the Judiciary Committee that requires ICE be notified when an illegal immigrant tries to illegally purchase a firearm. Dems voted to kill it. This gun control bill #HR8 is not about public safety. It's about taking away the rights of law abiding citizens."

13News confirmed several amendments introduced by Cline and other Republicans would have required Immigration and Customs Enforcement (ICE), the FBI and state and local police be notified when an undocumented immigrant failed a firearms background check. We can also verify Democrats on the House Judiciary Committee did vote against those amendments.

But there is lots of important context missing.

First, Democrats who voted against the Republican amendments said they did so on procedural grounds and because one of the amendments was offered too late to be fully studied before taking a vote. Rep. Jerry Nadler (NY), the Democratic chairman of the House Judiciary Committee, said he was not opposed to the content of the amendments.

“I am not opposed to it at this point. I may not be opposed to it. We may support it, but we do want to take a hard look at it,” he said during debate of the bill’s markup hearing.

Ultimately, Democrats did vote against the amendments. But a few weeks later, when Republicans again proposed inserting the ICE notification requirement back into HR 8, that proposal was adopted by Democrats.

And when the House voted on the full bill to enact more background check requirements for purchasing firearms — including the language to require ICE and other law enforcement agencies be notified when an undocumented immigrant fails a background check — nearly all Democrats supported the legislation and nearly all House Republicans voted against it. The "Bipartisan Background Checks Act" passed the House, but certainly not with bipartisan support. It later died in the Republican-controlled Senate.

So while 13News can verify some elements of the social media post are true, the meme lacks important context that renders its overall conclusion misleading. There is no evidence to support the statement "[Democrats] just admitted they have no problem with people having guns [as] long as they are not American citizens."

If you see a social media post you’d like us to VERIFY, send 13News an email at VERIFY@wthr.com.