No, Afghan refugees are not disappearing, and the FBI has not found and removed Taliban members from Camp Atterbury

Dozens of 13News viewers have emailed VERIFY to ask if the information reported by WIBC “Hammer & Nigel” host Jason Hammer is accurate. 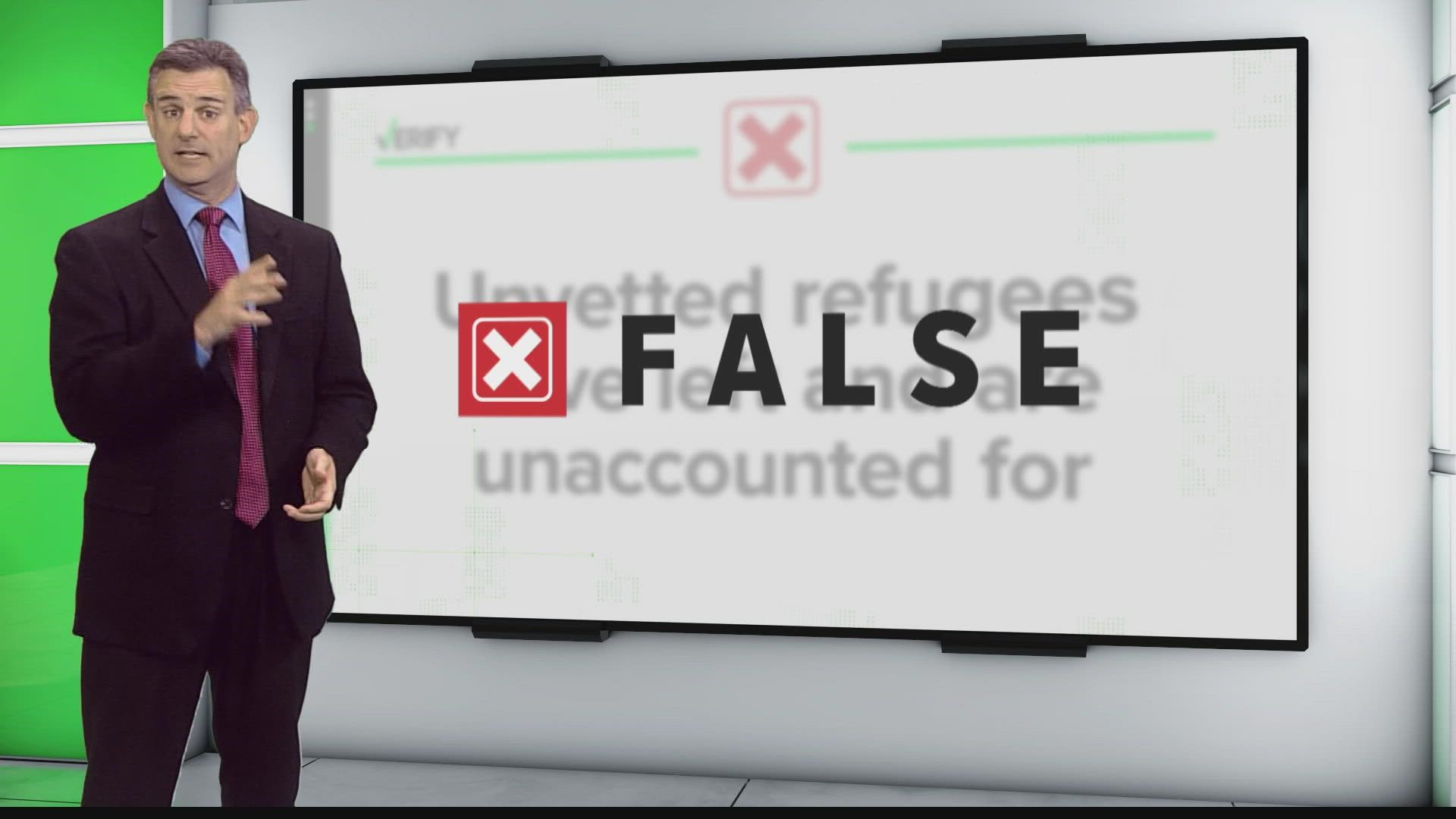 CAMP ATTERBURY, Ind. — A local radio talk show host said he received a firsthand report of shocking conditions at Indiana’s Camp Atterbury, a relocation site for more than 6,600 refugees that the American government recently evacuated from Afghanistan. WIBC “Hammer & Nigel” host Jason Hammer said earlier this week that a member of the Indiana National Guard texted him to say:

Hammer said his National Guard source is “someone I trust” but chose to keep the soldier’s name confidential for fear that the service member would lose his job. The information discussed Monday afternoon on the talk show was then posted on the Hammer & Nigel page of WIBC’s website in a story titled “National guard member makes shocking claims about conditions at Camp Atterbury.” The report includes an acknowledgment that “WIBC has not independently verified the source’s claims.”

The claims have not been posted or referenced in any way by WIBC’s news department, which updates the WIBC website throughout the day with news reports that have been factually checked by its journalists. 13News contacted WIBC’s news director to ask if anyone in the WIBC news department had been able to verify the accuracy of the “shocking claims about conditions at Camp Atterbury.” WIBC news director Chris Davis referred VERIFY’s inquiry to the radio station’s program director David Wood, who has not returned several email and phone messages from 13News.

A day after reporting the original claims, Hammer seemed to walk back some of the allegations. He said he had been contacted by other people at Camp Atterbury. Some of them backed the controversial claims but others emailed to say “none of that’s true.”

Dozens of 13News viewers have emailed VERIFY to ask if the information reported by Hammer during his talk show is accurate. Many of those viewers have expressed concerns about public safety -- both at Camp Atterbury and the surrounding community.

The Department of Homeland Security and Indiana National Guard have not permitted media, including WTHR, to tour Camp Atterbury since refugees first arrived earlier this month, so we cannot report on conditions we have seen firsthand. However, 13News VERIFY has researched the claims by talking to individuals who are currently at Camp Atterbury and who receive security updates about activities there. Based on information from those sources, VERIFY will address each claim individually:

Is it true that 47 Afghan refugees left Camp Atterbury without a trace and their whereabouts are unknown?

Lorie Dankers, a spokeswoman for the US Department of Homeland Security, says the allegation that 47 unvetted refugees left the base without a trace is simply not true.

“There are individuals who have departed Camp Atterbury due to eligibility or completion of on-site processing. Some individuals have decided to continue to resettlement process outside of Camp Atterbury. Intelligence, law enforcement, and counterterrorism professionals conduct screening and security vetting before the Afghan guests are allowed into the United States. This includes reviews of both biographic and biometric data,” she told VERIFY.

Dankers said a very small number of refugees – fewer than 47 – have left the base to resettle on their own, which they are allowed to do.

Credit: WTHR
Some of the dorms at Camp Atterbury will temporarily house Afghan refugees.

Refugees are not detained at Camp Atterbury. They are allowed to live there with free housing, food and medical care while they are going through a resettlement process. They may leave the National Guard base any time they wish, but they may not freely come and go. If they decide to leave Camp Atterbury, refugees are then responsible for their own housing, food and resettlement expenses, according to Dankers. Those who have left the camp have done so with the knowledge of the National Guard.

“As far as accountability, our military personnel do provide checks to monitor the guests, but that is for the guests’ safety and security. If someone chooses to continue the resettlement process away from Camp Atterbury, we are aware of that and it is communicated to those who monitor the housing areas,” Dankers said.

That information is consistent with details provided by Dan Cartwright, the town manager of Edinburgh, which is just outside Camp Atterbury. Cartwright attends detailed security briefings several times each week from the National Guard and Homeland Security, and he said he was disappointed to hear incorrect information reported on a local radio station.

“99.9% of what was reported on WIBC is untrue. There’s been no knife fights. No people escaped. Everyone is accounted for. A few people have left, but those people were picked up by family and have been vetted and had all their vaccinations and medical exams,” he told VERIFY.

Is it true that the FBI has picked up Taliban members at Camp Atterbury and taken them away?

Dankers said claims that the FBI have discovered Taliban members at Camp Atterbury and removed them is false.

FBI Indianapolis public affairs officer Chris Bavender said the FBI is ready to assist with Operation Allies Welcome as requested and needed, but the federal agency has not been at Camp Atterbury to remove suspected Taliban.

Is it true that Afghan refugees at Camp Atterbury have defecated on dining room tables and in other public spaces?

US Department of Homeland Security spokesperson Lorie Dankers has been assigned to work at Camp Atterbury and has been there for the past seven days. Wednesday morning, she told 13News she has been in all areas of the camp – including dining areas, common areas and housing areas used by the refugees – and has not personally seen any defecation in public areas.

Dan Cartwright, the town manager of Edinburgh, which is located just outside Camp Atterbury, said he attends several Camp Atterbury security briefings each week that are hosted by the Department of Homeland Security and the Indiana National Guard post commander. He told 13News that he has heard of several incidents related to human feces during recent security briefings.

“There is a cultural difference when it comes to bathroom habits. Some of the people are going to the bathroom right out in the open, and that is being addressed through education,” Cartwright told 13News. He said the issue has been identified as a problem, but not one that is widespread. “Anything in a dining room would be an isolated incident involving a child,” he added.

Is it true that refugees at Camp Atterbury have been stealing license plates and antennas from soldiers’ cars and using them to make weapons and to engage in fights?

US Department of Homeland Security spokeswoman Lorie Dankers said any reports or insinuation of rampant vandalism and fighting at Camp Atterbury are untrue. While she did not rule out the possibility of minor, isolated incidents, Dankers said she is not aware of any malicious activity involving vandalism to cars at Camp Atterbury during the week she has been at the facility.

Edinburgh town manager Dan Cartwright, who attends regularly security briefings about what is taking place at Camp Atterbury, said there have been no reported incidents of fights using knives or shanks. Following his Wednesday morning briefing, Cartwright told VERIFY that the refugees have been polite and well mannered.

“Our police department has never been called in for any disturbance,” he said. “If there were fights and violence, we’d be hearing about that.”

Is it true that only 25 of the 6,600 Afghan refugees at Camp Atterbury have identifying documents?

During his talk show, WIBC host Jason Hammer cited information from Indiana Congresswoman Victoria Spartz (R-District 5), who made another shocking claim about Camp Atterbury refugees during an appearance on NewsMax. While talking to talk show host Sean Spicer, Spartz stated, “From over 6,600 people [at Camp Atterbury], only 25 had actual documents.” Spartz then posted the claim on her social media sites and WIBC quoted her on the Hammer & Nigel talk show web page.

It is not clear where Spartz got her information, but the data is not accurate, according to the Department of Homeland Security.

“There is some confusion regarding the number of Afghan guests who arrived with government-issued identification. The vast majority of arrivals present some form of identification or documentation demonstrating their identity,” said Homeland Security spokeswoman Lori Dankers. “Approximately 76% of guests at Camp Atterbury have presented some form of documentation or identification. It is important to note more than 22% of our guests are age nine and younger, suggesting that many of those may not have government-issued IDs.”

NOTE: 13News has spoken to other individuals and organizations that have recently worked with Afghan refugees on the grounds of Camp Atterbury. They either dispute the claims raised during WIBC’s Hammer & Nigel talk show or say they did not see any activity that supports those allegations. Because those individuals have requested anonymity and it is VERIFY’s practice to include only named sources in our fact-checking, 13News is not including comments from those individuals in this report.