Donnie Wahlberg loves his Waffle House and also loves taking care of his servers, as an Indianapolis waitress found out this weekend. 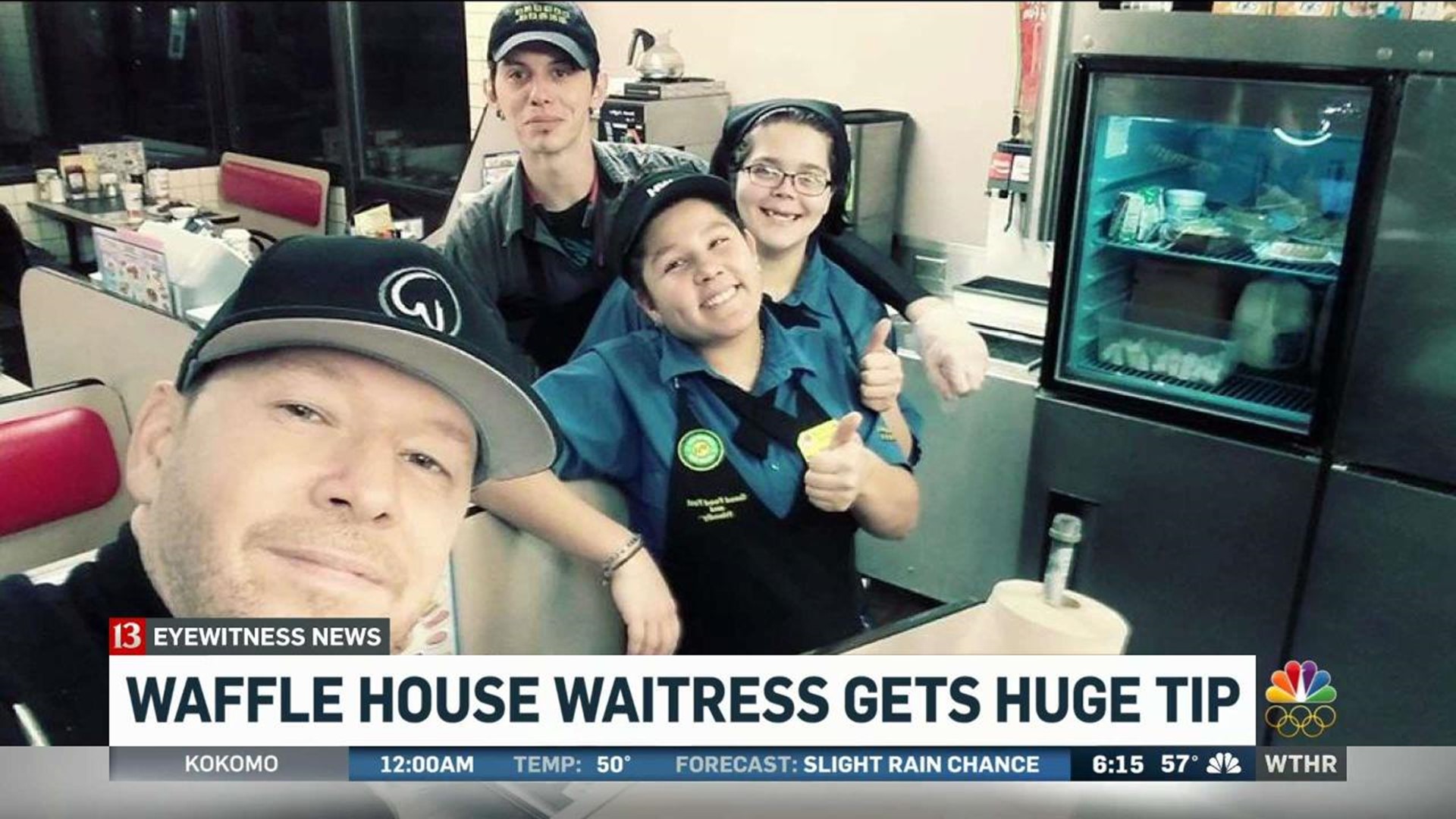 INDIANAPOLIS (WTHR) - A waitress can work a lifetime and never see this.

On the job at Waffle House for just three months, Kassie Rhea just got the tip of a lifetime. It came at just the right time.

The restaurant hardly looks like a Hollywood hangout, but for a couple of hours last Saturday night it was just that.

No one noticed when he walked in.

"I am not going to lie, I had absolutely no idea," Rhea admitted.

Rhea was working at the Waffle House on Lynhurst when someone else did notice the "Blue Bloods" star.

"She was like, ‘That's Donnie Wahlberg!’ and I was, like, ‘Awesome.’ He was in town for the game and decided to do a surprise pop-up at Waffle House, so lucky me," she said.

It comes three months after Bruno Mars stopped by an east side location after a concert at Bankers Life Fieldhouse.

A @celtics win and a post game @WaffleHouse stop?! Thanks Indiana, for one heck of a father son #RoadTrip! #Celtics @KyrieIrving ☘️ pic.twitter.com/C5VvlJkRpy

Rhea had no idea how lucky she would be.

A Celtics fan, the former New Kids on the Block star decided to bring his son to Indy to see his Boston play the Pacers.

"I just treated him like a normal, everyday person because that is what he is. He just has a big name," Kassie said.

The biggest surprise came when he paid the check and she saw the $1,000 tip.

"On a $48 check I did not think it would be that big. I almost had a heart attack, I am not going to lie. It took me completely by surprise," Rhea said.

Wahlberg only had one request, that she give $200 to the other server and $200 to the cook. He even posed for pictures.

"He was spreading the love. It was pretty awesome," she said.

She also admitted it came at the perfect time. Rhea will celebrate her 21st birthday in a couple of weeks.

"I am so glad she got the $1,000 tip because she really needed it. It was perfect timing. She was struggling for a while," said co-worker Gayla Foley.

"I called my mom,” Rhea said. “I called her right after and I told her everything. She was like ‘that is so cool.’ It was pretty awesome. I had a whole conversation with her about it. It was a good five minute conversation because I was so excited. I met the other Wahlberg. Not Mark, the other one. The cool one and he was super sweet," she said.

She has a picture to prove it.

"Met a celebrity who is down to earth and really nice. That made it a pretty awesome experience because he wasn't rude or anything. It was like awesome," she said.

It's not the first time Wahlberg has shown his appreciation for a Waffle House crew. In July, he left a $2,000 tip and gave concert tickets to the workers at a restaurant in Charlotte. the star said on Facebook that his mother waited tables and his father tended bar, so he knows how hard people in the food service industry work.