A letter from local union leaders to their members shows there's more to the story about 1,100 jobs staying at Carrier's Indianapolis plant. 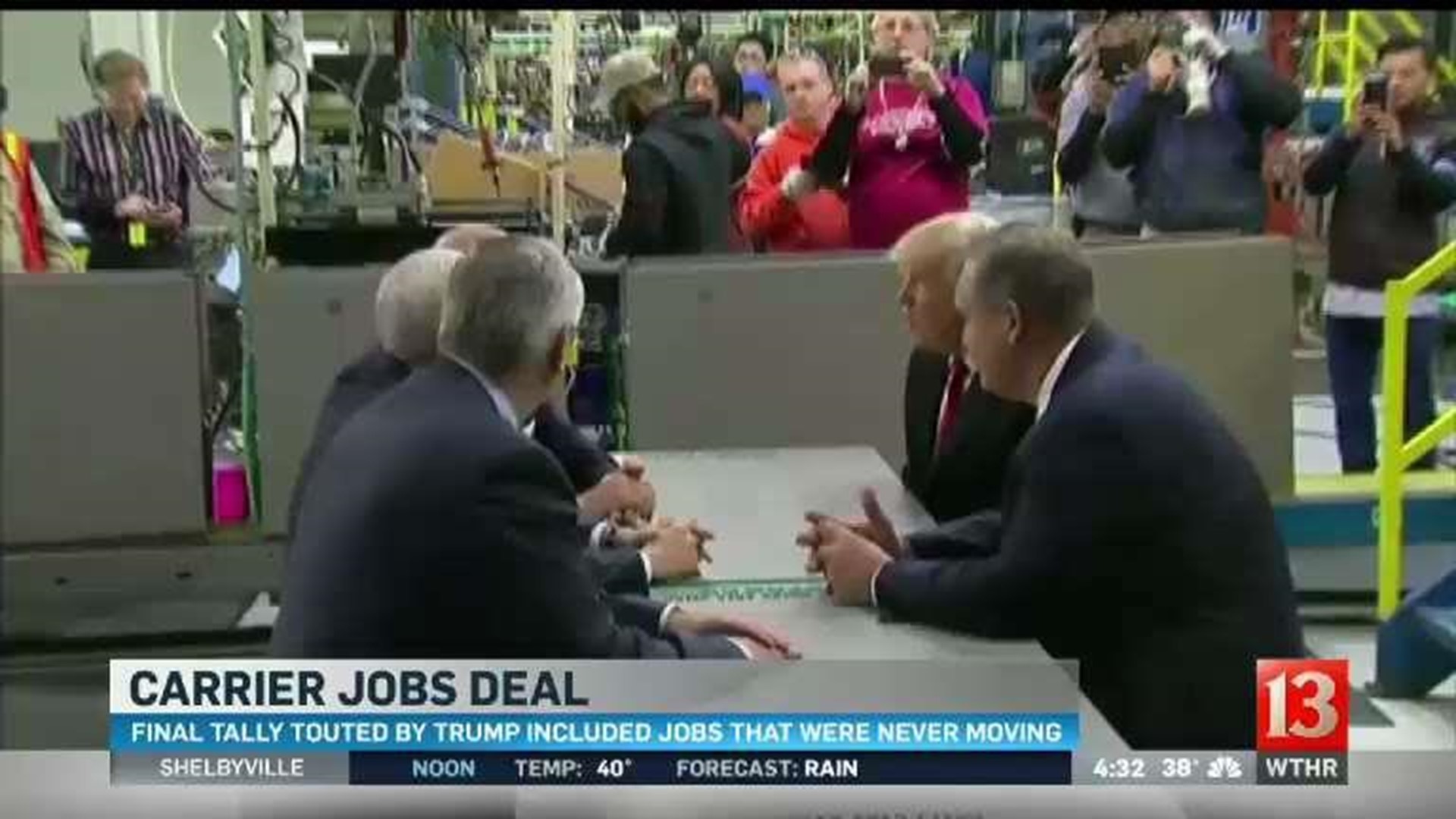 INDIANAPOLIS (WTHR) - The Carrier deal, brokered by President-elect Donald Trump, may not have saved as many factory jobs as was presented at the plant last week in Indianapolis.

Carrier workers received a flyer from the United Steelworkers, Local Union 1999. It details which jobs are staying here in Indy and which are going to Mexico. The numbers are a bit different from last week's big announcement.

Last Thursday, amid much fanfare, President-elect Trump spent time on the factory floor and talked with union workers at the westside Indianapolis Carrier plant.

He also made a big announcement about a big deal reached with United Technologies, Carrier's parent company, to save 1,100 American jobs that were going to be moved to Mexico.

Carrier worker T.J. Bray, who's also a communications rep for the union, told reporters across the country he was thrilled. His phone rang again while we talked with him Monday afternoon.

"I've been getting non-stop phone calls. Non-stop media. It's been a wild, wild week," Bray said.

But Bray and other union workers just learned some new numbers about the actual number of production jobs saved by the Trump-Pence deal.

"We didn't know the breakdown before because no one would give us any information," Union President Chuck Jones told Eyewitness News by phone Monday. "Now what we're losing is 550 member jobs."

"We found out today that more jobs are leaving than what we originally thought," Bray said. "It seemed like since Thursday, it was 1,100 then it was maybe 900 and then now we're at 700. So I'm hoping it doesn't go any lower than that."

Union workers got a letter at the plant saying Trump's deal with Carrier will save only 730 factory jobs in Indianapolis, plus 70 salaried positions - 553 jobs in the plant's fan coil lines are still moving to Monterrey, Mexico.

All 700 workers at Carrier's Huntington plant will also lose their jobs.

"We are happy that Carrier Corp. has decided to retain a portion of the manufacturing jobs that it planned to move from Indianapolis to Mexico beginning in 2017," United Steelworkers, Local Union 1999 said in a letter to members. Union leaders thanked both President-elect Donald Trump and Sen. Bernie Sanders, I-Vt., for bringing so much attention to their efforts during and after the 2016 campaign.

So how did the president-elect get to that 1,100 number last week?

"It's the R&D jobs that were already slated to stay," Bray explained.

Trump was including 350 research and development jobs that were never going to move to Mexico in the first place. Those were jobs that Carrier said all along would stay in Indianapolis.

"It appears they may have hyped that number (1,100) a little bit and then once the company and everything settled down we started seeing the real numbers and started getting a little discouraged about how many jobs," Bray said.

As a 14-year employee, Bray knows his job is safe. Seniority will decide who's in and who's out.

The bait and switch presidency https://t.co/QIOwLSW9vZ

Workers in danger of losing their jobs to Mexico were hired after February 2005. The union hopes retirements at the plant may help lessen the hit and reduce the number of layoffs.

"We had the seniority list going around today," Bray said. "Everybody wants to know, you know, where they're at - do they meet that cut or not."

Bray says he's still thrilled that many jobs are staying in Indy. But he says last week, it seemed like a lot more co-workers and friends would be safe.

"That's the hardest part about it is we're happy the jobs are saved, but at the same time, we're discouraged and upset we can't save all of them," Bray said.

Eyewitness News reached out to Vice President-elect Gov. Mike Pence's team asking specifically for clarification about the number of factory jobs saved in this deal.

In response, Pence spokesperson Matthew Lloyd said, "More than 1,000 jobs for hard working Hoosiers were going to leave Indiana for Mexico. Those jobs are now staying right here in Indiana thanks to the efforts of President-elect Trump and Vice President-elect Pence."

USW Local 1999 had a brief meeting with Carrier on Thursday to discuss severance packages for those who will still be affected by Carrier's outsourcing. Those discussions will continue over the next few weeks.

The union was not involved in any discussions with President-elect Trump.