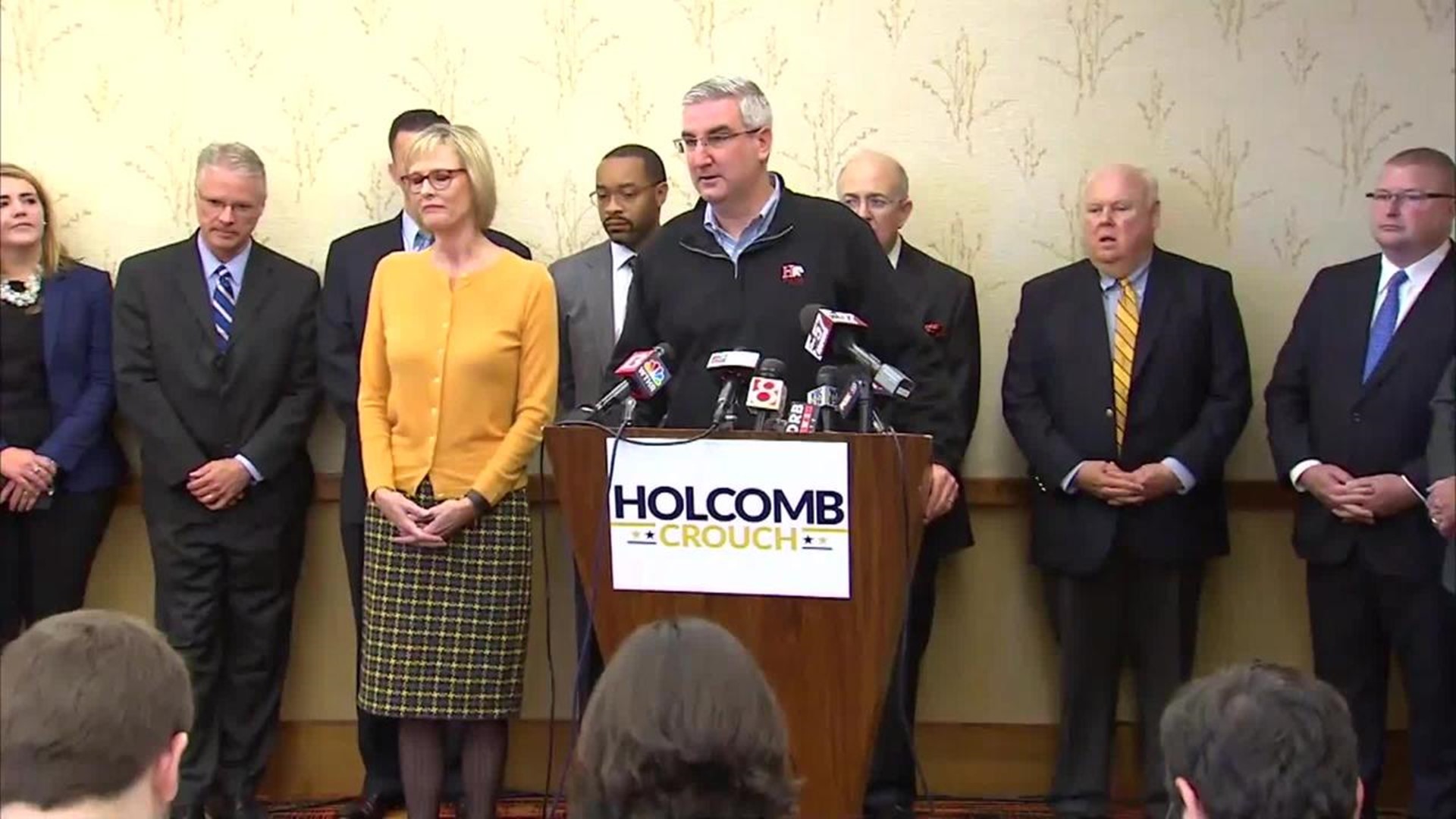 "You can all expect to have regular updates as we meet," Holcomb told reporters at a news conference Wednesday. "Our state government will reflect and reach out to every corner of the state - all walks, cities large and small, all communities."

Holcomb is once again on the fast track as he gets ready to take over as governor in two months, just nine months after he assumed the office of lieutenant governor.

At Wednesday's news conference, he laid out his vision for his first days in office.

"We're going to make sure that we pass an honestly balanced budget that we protect our fiscal integrity as a state. Again, we're focused on people, people, people. That's pre-K through all the way to making sure that veterans are receiving the benefits that they've earned," Holcomb said.

The governor-elect says he'll be looking to pass a long-term infrastructure program, and running all agencies of state government. Holcomb says it's unclear how large a role Governor Mike Pence will play in finishing out his term at the Statehouse, considering Pence will be occupied becoming the nation's next vice president.

As for Holcomb's transition team lined up behind him today, he calls them Next Level Indiana, Inc.

"They are talented, experienced and a diverse group of individuals who I know are up to the tall order; the task," Holcomb said.

Holcomb's win extends the Republican Party's twelve-year hold on the state's top office, the first office he has ever been elected to.

Holcomb says his staff will be drawn from those he has been involved with over the past 12 years, but he will include new faces some who he has met over the last 106 days.

"We'll evaluate every agency starting today. That's what this first huddle was all about," he said.

Holcomb was little known around the state when he became the Republican candidate in July, about five months after Pence appointed the former state GOP chairman as lieutenant governor.

In his speech Holcomb said, "Governor Mitch Daniels built a foundation, Governor Mike Pence added a few stories, and Suzanne Crouch and I are going to add story after story after we take Indiana to the next level"."No corner of our state will be ignored and no Hoosier will be left unclear on our focus of economical development, community development, excellence in education, and providing good state government and a great tax payer value," said Holcomb.

Gregg's campaign aimed to link Holcomb to controversies during Pence's term such as Indiana's 2015 religious-objections law that sparked a national uproar from gay-rights supporters.

The Latest on Election Day 2016 in Indiana (all times local):

McCormick is now superintendent of the Yorktown Community Schools near Muncie. She ran a campaign critical of Ritz's management of the Education Department and maintained she could work better with the Republican-dominated Legislature.

Ritz was the only Democrat among Indiana's elected state officeholders for the past four years. She clashed frequently with Republican Gov. Mike Pence and GOP lawmakers over issues such as administration of the A-F school ratings system and expansion of the state's private school voucher and charter school programs.

McCormick will be involved in upcoming debates over the state's selection of a new standardized exam to replace the much-maligned ISTEP and the push for expansion of state-funded preschool programs.

Republican Trey Hollingsworth has won election in southern Indiana's 9th Congressional District, overcoming campaign attacks labeling him a carpetbagger from Tennessee who used his family's fortune to buy the seat.

Hollingsworth spent more than $2.5 million of his own money and a political group funded by his father pumped in about $1 million more to win the seat Republican Rep. Todd Young gave up to run for U.S. Senate.

Democratic candidate Shelli Yoder got support from national Democratic groups as she criticized Hollingsworth for running for Congress after just moving to Indiana last year. Hollingsworth overcame similar attacks during the Republican primary, winning a five-candidate race with about a third of the vote.

Hollingsworth's television commercial-heavy campaign presented him as a political outsider with business experience.

Hollingsworth and his father own several companies, including one that constructs industrial parks and has substantial holdings across the South.
___

The two men sought to succeed Attorney General Greg Zoeller, who did not seek a third term after losing May's Republican primary for a U.S. House seat.

Republicans have held the statewide post since 2001. The duties of the state attorney general's office include defending Indiana when it's sued, serving as the legal adviser to state agencies and approving state contracts.

Hill will be the first African-American man to serve as Indiana's attorney general.

Two black women, both Democrats, have previously held the post.

Indiana voters have approved a constitutional amendment to protect the right to hunt and fish.

The amendment states that the right to hunt, fish, and harvest wildlife shall be forever preserved for the public good, subject only to laws prescribed by the General Assembly. Hunting and fishing are popular in Indiana. The U.S. Fish and Wildlife Service estimates Indiana has about 392,000 hunters and about 801,000 anglers.

The amendment's author, Republican Sen. Brent Steele, says he wants to ensure those rights are not endangered by animal rights groups. The measure was backed by the National Rifle Association.

The Humane Society of the United States said the amendment was unnecessary because those rights weren't under attack.

Indiana joins 19 other states that had previously adopted constitutional amendments to protect those rights.

Young, a three-term congressman from southeastern Indiana, will succeed retiring Republican Sen. Dan Coats, who won the seat six years ago after Bayh said he decided not to seek re-election because he was tired of Washington partisanship and gridlock. Young was the heavy favorite to keep the seat in GOP hands in the reliably red state until Bayh's surprise announcement July 13 he would run. He made the decision following a recruitment push by national Democrats to help in the effort to try to regain control of the Senate.

Banks won a tightly contested, six-candidate primary in the heavily GOP district for the seat that Republican Rep. Marlin Stutzman gave up for an unsuccessful run for the party's U.S. Senate nomination.

Republican Donald Trump has won the presidential contest in Indiana, with home-state Gov. Mike Pence on the ticket as his running mate.

Neither candidate paid much attention to Indiana during the campaign. Trump essentially clinched the Republican nomination with his victory in Indiana's May primary.

Trump was heavily favored to win Indiana even before he picked Pence as his vice presidential candidate just before the GOP convention in July.

Polls are closing across much of Indiana.

Polls in counties on Eastern time were due to close at 6 p.m. local time Tuesday, but voters in line at that time were expected to be allowed to cast their ballots in national, state and local contests.

Polls in 12 northwestern and southwestern counties on Central time will remain open an hour later.

In the U.S. Senate race, Democrat Evan Bayh is trying to return to the seat he gave up six years ago. He's battling Republican U.S. Rep Todd Young for the seat being vacated by Sen. Dan Coats.

State election officials say nearly 900,000 Indiana voters cast early ballots for Tuesday's election and that could mean a late night in some counties tallying those ballots.

Indiana Election Division co-director Brad King says that as Monday's deadline for early voting, county clerks had received more than 896,000 ballots cast in person and through other methods.

King says mailed-in absentee ballots and overseas ballots from members of the military and Americans working overseas are still arriving at clerk's offices.

Election officials say some of Indiana's polling places are seeing long lines and a few equipment glitches but Election Day has generally gone smoothly across the state.

Indiana Election Division co-director Angie Nussmeyer says long lines are an issue in several Indiana counties but that was expected because of strong voter interest in Tuesday's election.

Valerie Warycha (WOR'-eh-chuh), the spokeswoman for the Indiana Secretary of State's office, says she's heard of long lines at polling places "but nothing out of the ordinary."

It was a quick trip to the voting booth for Donald Trump's running mate on Tuesday.

Indiana Governor Mike Pence was joined by his wife, Karen, as they voted in Indianapolis. The couple encountered no lines and spent about five minutes filling out their ballots.

Pence told a small crowd afterward that he was grateful for the "support and prayers of people all across the United States" and he pledged a more prosperous America with the Trump-Pence ticket.

The Republican governor and his wife voted in a precinct that has leaned liberal in past elections.

As voters cast their ballots for president, some are convinced, while others are holding their breath.

In Indianapolis, 50-year old homemaker Ranita Wires said she voted for Hillary Clinton because she trusts her, but said "this has been the worst," and she's "so glad it's over."

Craig Bernheimer voted for Donald Trump at his local polling station in Tulsa, Oklahoma early Tuesday, saying it has more to do with "what the other didn't bring."

He said, "I wanted to go with Gary but he failed me." Grasmick voted for Donald Trump instead.

A record number of Indiana voters cast their ballots before Election Day.

Among them was Sandy Shoff, a retired principal from South Bend, who says she voted Monday for Donald Trump even though she isn't an enthusiastic supporter. She says she likes that he speaks for the people and she's ready for a major change. She also says she doesn't like corruption in government.

Ester Escobedo, another retiree from South Bend, says she had a special feeling casting a vote for on Monday for Hillary Clinton, who could be the first woman president.

Kim Morton, a 44-year-old stay-at-home mother from South Bend who usually leans Republican, says she couldn't vote for Trump because of his negative comments during the campaign.

Polls are opening across Indiana as voters cast ballots in national, state and local contests.

In Indiana on Tuesday, voters will decide who will replace Republican Gov. Mike Pence, who is the vice presidential candidate on the national ballot with Donald Trump. Democrat John Gregg is facing off against Lt. Gov. Eric Holcomb.

In the U.S. Senate race, Democrat Evan Bayh is trying to return to the Senate seat he gave up six years ago citing Washington partisanship and gridlock. He is battling Republican Congressman Todd Young for the seat being vacated by Sen. Dan Coats.

Indiana voters will also decide whether Democrats have a bigger stake in the General Assembly.

Republican presidential nominee Donald Trump is favored to win Indiana's 11 electoral votes but races for governor and U.S. Senate are expected to be close.

Election officials say a record number of at least 880,000 Indiana ballots were cast before Tuesday.

Indiana has drawn extra attention this year, with Republican Gov. Mike Pence on the national ticket as Trump's running mate.

Democrat John Gregg could end a 12-year Republican hold on the governor's office if he beats Eric Holcomb. Democrat Evan Bayh has never lost an election dating back to 1986 but faces a fierce challenge from Republican Rep. Todd Young. The outcome could help decide which party controls the U.S. Senate.