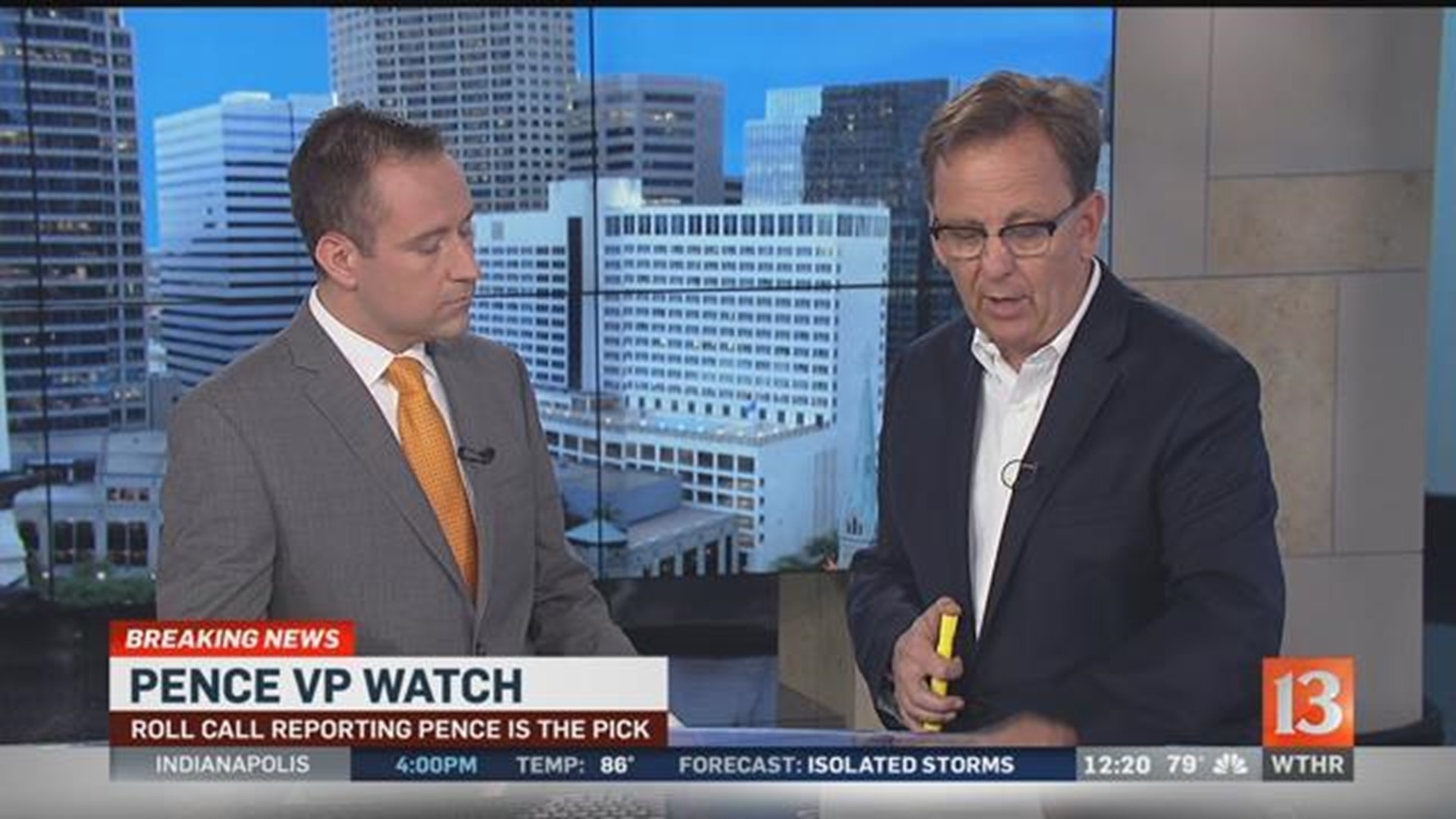 Trump had planned to introduce his new running mate at a public event Friday morning, but tweeted late Thursday he is postponing that announcement following the attack in Nice, France that reportedly killed at least 70 people.

In light of the horrible attack in Nice, France, I have postponed tomorrow's news conference concerning my Vice Presidential announcement.

Thanks to a tip from Eyewitness News, WNBC captured video of Pence landing on a private jet in New Jersey Thursday evening.

Earlier that morning, Gov. Pence's campaign manager, Marc Lotter, was spotted boarding a flight from Indianapolis to New York. Lotter told an NBC News reporter that he's headed there for "some meetings."

Sources confirm to me IN Gov #MikePence is Donald Trump's pick to be #VP.

Earlier Thursday, POLITICO reported Gov. Pence had been left off of the RNC speaker list, while Newt Gingrich and New Jersey Gov. Chris Christie were listed as speakers. Analysts say this could be a sign Pence is being saved for the VP speaking slot.

"Ultimately this is a decision that our nominee will make and I'm confident that he'll make a great decision and I look forward to supporting that decision in every way," Pence told reporters Wednesday.

Despite the reports that Pence is his guy, the presumptive Republican presidential nominee says in an interview on Fox News Channel, "I haven't made a final, final decision."

Pence has emerged as a late favorite for the job, but Trump advisers caution that the businessman had not made a final decision and could still change his mind.

Pence's people have until noon tomorrow to come to the Indiana Statehouse and file paperwork, withdrawing him from the governor's race here in Indiana.

Now that Donald Trump has postponed his announcement on who his vice presidential pick will be, it may be the paperwork filed at the Statehouse that does the talking for him.

Trump was set to make his vice presidential announcement tomorrow morning at 11, but has now postponed that because of the attack in France.

"It's wonderful to be respectful of another country and the tragic circumstances, but at the same time, when are you going to make this announcement to the American people, and particularly the Republican Party and the state of Indiana, who may or may not have to fill a void for the gubernatorial race?" asked Dr. Laura Albright, a political science professor at the University of Indianapolis.

Albright said announcement or not, if Pence is going to withdraw from the governor's race, a noon deadline to file paperwork to withdraw is looming.

"The paperwork will tell the story. I'm sure Pence already has things filled out and people have them in their briefcases and the moment it's announced, are ready to turn it in to the secretary of state's office," said Albright.

Another sign, Politico is reporting Pence is not on the speakers list for the Republican National Convention. Newt Gingrich and New Jersey Governor Chris Christie are listed as speakers, though.

"It seems very obvious that you wouldn't have a speaker who would then be announced as vice president and you would just want to save that and the fact that that is indicated there, seems like a really strong indication in fact, that he is the pick," said Albright.

Still, when it comes to Donald Trump, says Albright, all bets are off.

"Donald Trump has proven in this campaign that anything can happen at the last minute," she said.

If Pence would withdraw from the governor's race, Republicans will have 30 days to pick a replacement.

Meanwhile, Trump tells Fox that Pence has done a wonderful job in Indiana, but adds that fellow finalists Christie and Gingrich as "fantastic" people.

Gingrich says that Trump's impending vice presidential decision ultimately comes down to whether he wants a fellow "pirate" or a "relatively stable, more normal person." The former House Speaker is one of the three finalists the presumptive GOP nominee is considering for his running mate.

He's speaking on Facebook live about the intricacies of the vetting process and sharing his thoughts on the two other finalists.

Gingrich suggests that he has yet to hear from Trump about his decision.

He says, "We'll find out what Donald Trump decides to do."

Mike Pence was born in Columbus, Ind. He attended Hanover College and graduated in 1981 before continuing on to his Jurisprudence Doctorate in 1986 from Indiana University School of Law.

Mike Pence has been one of the most successful Indiana politicians in recent years, but his career started with a couple of early setbacks. He lost congressional elections in 1988 and 1990, and then worked as an attorney and radio talk show host for a few years.

He took another shot at Congress in 2000 when David McIntosh gave up his sat to run for Governor. Pence won that year - and then won five more times - representing District 6 in eastern Indiana through 2012, when he chose to leave Congress and run for governor. He won by a slim margin and was running for re-election to a second term when Donald Trump came calling.

It appears gov pence left the residence. He joined the security detail out of sight of cameras #wthr pic.twitter.com/JUfeKqMnrK

Trump and his adult children spent time with Gov. Pence at the governor's residence on Wednesday. Trump also reportedly met with Gingrich and Sen. Jeff Sessions (R-Ala.) in Indianapolis as he mulled over who to put on his ticket.

Trump's campaign confirmed they will make the formal announcement about his VP pick at an event Friday morning in Manhattan.

I will be making the announcement of my Vice Presidential pick on Friday at 11am in Manhattan. Details to follow.

Eyewitness News will continue to follow any developments on this situation.