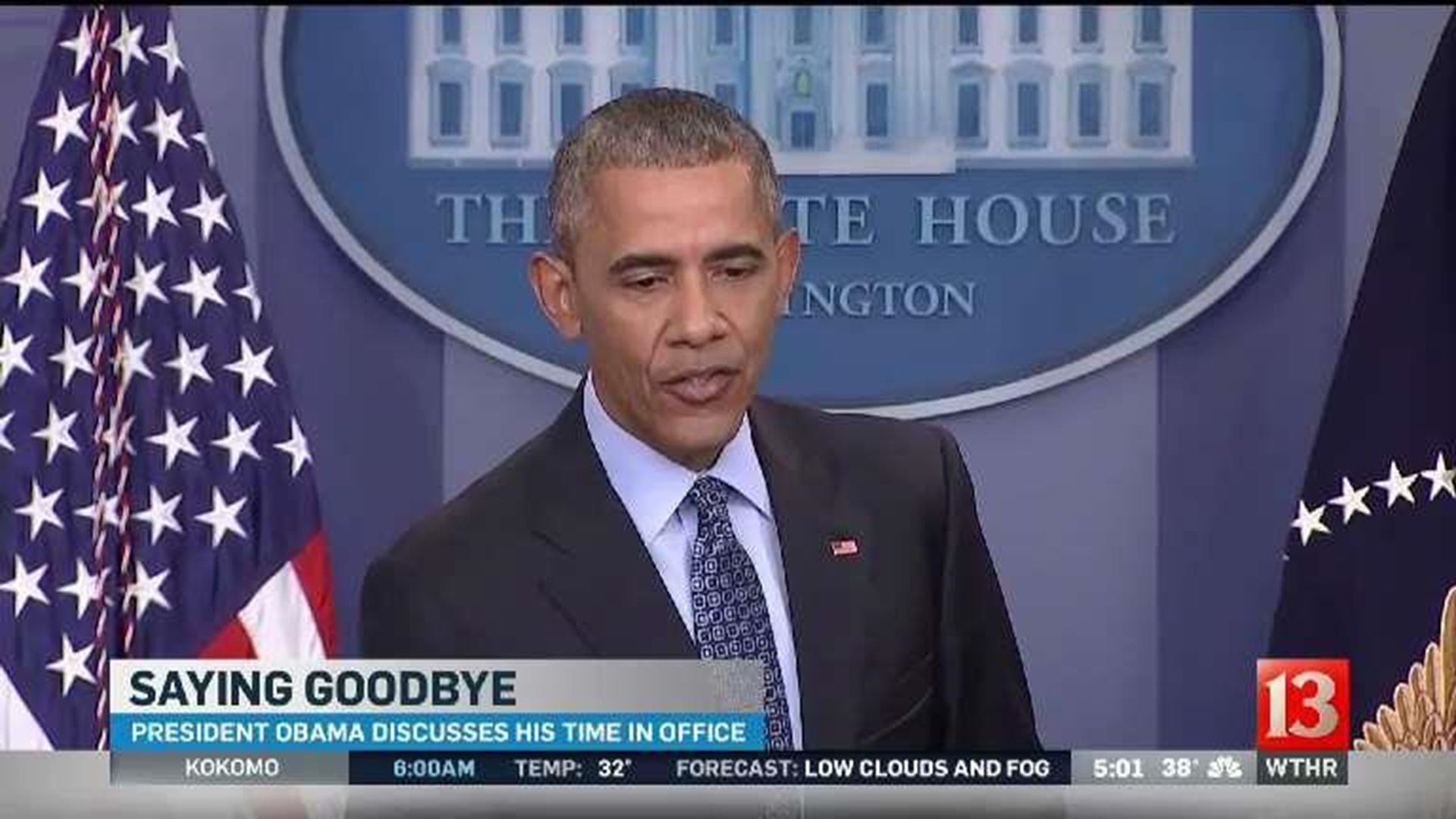 President Barack Obama is warning that the "moment may be passing" for a two-state solution to the Israeli and Palestinian conflict.

Obama says in his final White House news conference that he continues to be worried that the "status quo is unsustainable" in Israel. He says his administration has tried to preserve the possibility of a two-state solution because he does not "see an alternative to it."

The United States decision to allow the United Nation's most powerful body to condemn Israeli settlements in the West Bank and east Jerusalem has been condemned by President-elect Donald Trump and Israeli Prime Minster Benjamin Netanyahu.

Obama says the president-elect "will have his own policy" and that is his administration's prerogative. The president calls the situation in Israel "a volatile environment."

President Barack Obama says that United States underwent "a fundamental shift" in its relationship with Cuba.

But in his final press conference as president Wednesday, Obama adds that treating Cuban migrants differently "didn't make sense" in this day and age, saying it shouldn't make a difference whether migrants come to the U.S. by land or by foot.

Obama announced last week that he is ending a longstanding immigration policy that allows any Cuban who makes it to U.S. soil to stay and become a legal resident.

President Barack Obama says that after he leaves office on Friday he wants to take time to process the "amazing experience" his family has gone through.

Addressing reporters at his final news conference, Obama says he wants to make sure that Michelle Obama, his wife of 24 years, is willing to "re-up" and put up with him a little bit longer.

He wants to write, be quiet a little bit and "not hear myself talk so darn much." He also wants to spend time with daughters Malia and Sasha.

Obama and his family will head for vacation in Palm Springs, California, after Donald Trump is sworn in as president.

The White House has not said how long they will stay in California before they return to a rented home in Washington.

President Barack Obama says he has had "cordial" talks with President-elect Donald Trump but he's under no illusions that they share many policy goals.

Obama says in his final White House news conference that Trump won the election opposed to many of his initiatives during the past eight years. The outgoing president says it's appropriate for Trump to move forward with his own vision and values.

Obama says, "I don't expect that there is going to be enormous overlap."

Obama is avoiding a question on whether he supports about 50 House Democrats planning to boycott Trump's inauguration. He says he'll be there along with outgoing first lady Michelle Obama.

President Barack Obama is calling on President-elect Donald Trump to continue trying to persuade Russia to reduce its nuclear stockpiles.

In his final press conference as president Wednesday, Obama said that he tried to negotiate further reducing nuclear arsenals with Russian President Vladimir Putin, but he says Putin was reluctant.

Obama is also calling on the next administration to lead by example and work to prevent big countries from "bullying" smaller countries.

He says that implementing sanctions on Russia following its incursion of Ukraine is a "good example of the vital role" America must play in advocating for and enforcing basic rights around the world.

President Barack Obama says the WikiLeaks website was not a factor in his decision to grant clemency to Chelsea Manning.

Obama on Tuesday commuted the 35-year sentenced given to the former Army intelligence analyst for leaking more than 700,000 classified and military documents to the anti-secrecy website. The website's founder, Julian Assange, had recently said he would agree to U.S. extradition if Obama granted clemency to Manning.

Obama said at the final news conference of his presidency that he examined Manning's case and thought that commuting her sentence was "entirely appropriate."

Manning is more than six years into her 35-year sentence. She is set to be released from prison in May.

President Barack Obama is defending his decision to commute convicted leaker Chelsea Manning's prison sentence, telling reporters that "justice has been served" in her case.

Obama says in his final news conference as president that Manning has already served a "tough prison sentence" and it will not make people think that they won't face punishment if they disclose vital classified information.

Republicans have assailed the decision, saying it sets a dangerous precedent for national security.

The former Army intelligence analyst asked Obama to commute her 35-year sentence for giving classified government and military documents to the WikiLeaks website.

Manning was known as Bradley Manning at the time of her 2010 arrest and is more than six years into the sentence. She is set to be released from prison in May.

President Barack Obama is thanking the journalists who have covered him in the White House, saying that "having you in this building has made this place work better."

President-elect Donald Trump's transition team is considering holding briefings outside the White House briefing room, a proposal that is raising concern over whether it could result in limited White House access.

President Barack Obama is opening his final news conference by sending his thoughts and prayers to former President George H.W. Bush and his wife, Barbara.

Both Bushes are hospitalized in Houston. The 92-year-old former president was admitted for a pneumonia-related respiratory problem. His wife was hospitalized as a precaution.

Obama says the White House reached out to the Bush family after learning of the hospitalizations.

He says the Bushes have not only dedicated their lives to country, but have been a constant source of friendship, support and good counsel for him and first lady Michelle Obama.

Obama adds that "they are as fine a couple as we know."

President Barack Obama is expected to defend his decision to shorten the sentence of convicted leaker Chelsea Manning when he holds his final news conference on Wednesday.

Obama plans to answer reporters' questions at the White House, two days before he leaves office.

Manning, who was known as Bradley Manning at the time of her arrest, is more than six years into the sentence. She will be released from prison in May.

Republicans have blasted the decision, with House Speaker Paul Ryan calling it "outrageous."

Ryan says Obama has set a "dangerous precedent" that anyone guilty of who compromises U.S. national security won't have to pay for their crimes.