Now that the primary election is behind us, we are now getting our first glimpse of how tight the race for Indiana governor may really turn out to be in November. 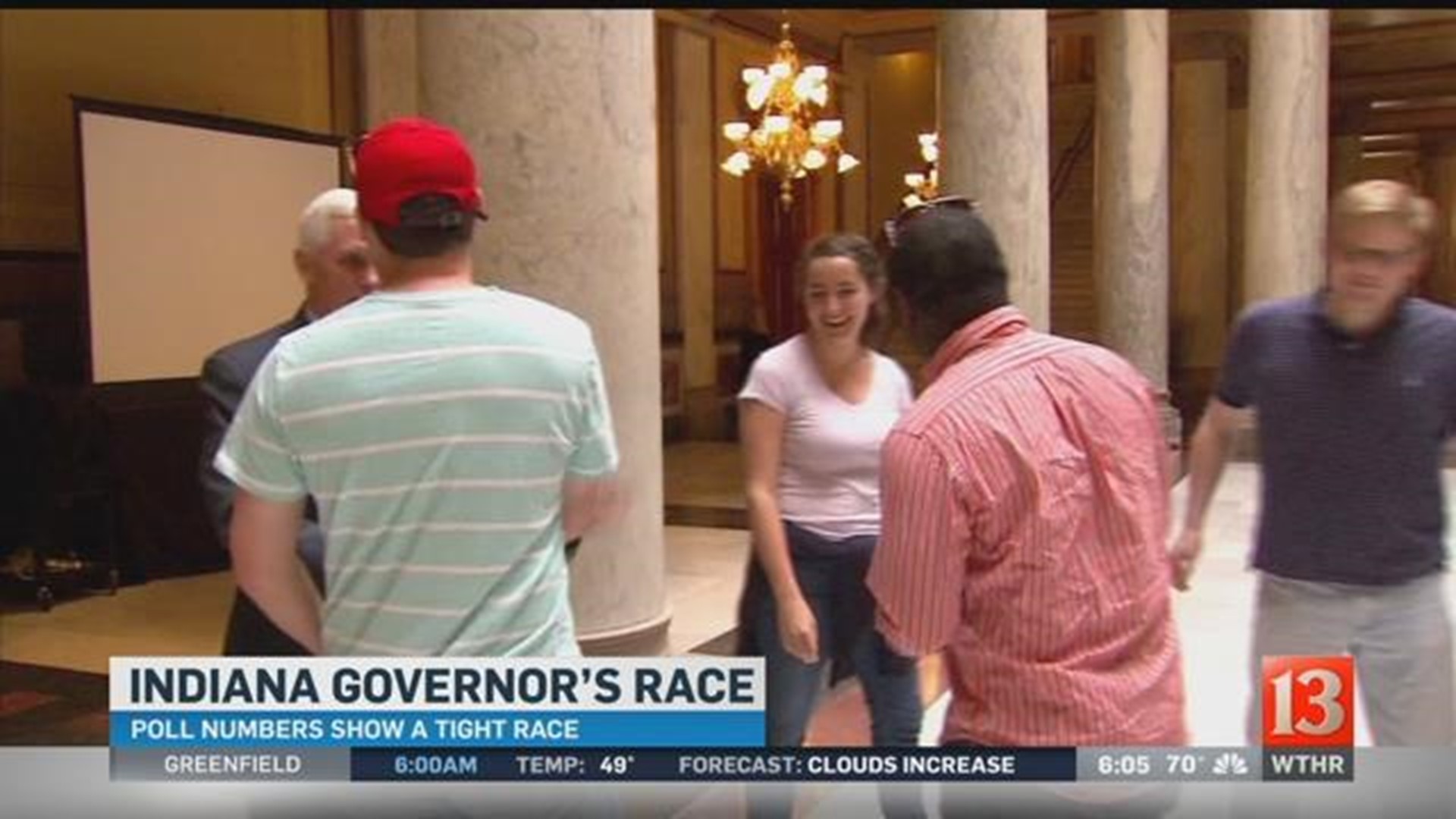 The first post-primary, statewide poll in the Indiana governor’s race has the incumbent with a 40-36 percent lead. At first blush, that would seem to be a positive for Governor Mike Pence until you realize 12 percent more Republicans were sampled than Democrats, which means this could be a horse race.

Pence started his day in Shelby County, but the Bellwether Research Poll results followed him there.

"I understand we have an election ahead of us," Pence responded when asked if he had seen the poll results Thursday morning.

If he had, he would now know he has his work cut out for him - especially with women. The Free Enterprise PAC poll shows women under the age of 45 want a new governor by a margin of 59-21 percent.

"Ultimately, the poll that matters is the one that is on Election Day and I am just determined to do my part to make sure Hoosiers understand how far we have come, but my vision for forward in the future," the governor said.

John Gregg believes that number is the governor's Achilles heel.

"He wants to tell people who they can love. He's wanted to go to the doctor's offices with all the women in Indiana and now he's wanting to be bathroom monitor," Gregg reacted during an afternoon interview outside the Indiana Statehouse.

The poll put the governor's re-elect number at 36 percent, with 49 percent wanting a new person in office and 15 percent undecided.

"Yes, he is upside-down with regard to approval and that's with the 36 percent re-elect number. If you are on the governor's team, you will be looking really hard to figure out a way to indicate to voters the job you've done is not the job...is not what you are going to do moving forward," said Megan Robertson from Free Enterprise PAC, the group that sanctioned the poll.

College-educated voters disapprove of Pence's performance. Thirty-six percent approve, while 50 percent disapprove. However, the governor fares much better with non-college voters who approve of the job he's doing by a 42-38 percent margin. He also tails with Independents under the age of 45.

"I'm focused on governing. I am focused on making sure we keep the Indiana economy growing and that we continue to promote the kind of policies and education and infrastructure that really got our state setting the pace and opening doors of opportunity for Hoosiers," Pence responded.

Now he has six months to make his case to the voters.

The poll also showed the governor besting Gregg on issues like attracting jobs and managing the budget, but Gregg topped Pence on improving education and representing Indiana better nationally.

This poll, which was sanctioned by Republican Bill Oesterle, who has long argued his party was out of step with mainstream Hoosiers, has to be a reality check. If women are the deciding factor in this race, the governor has his work cut out for him.

The flash poll of 600 likely voters conducted May 11-15 has a margin of error of plus or minus four percent, but the most interesting element is that the poll had a +12 percent Republican makeup, which means it was basically a Republican sample.

On the question of job approval, 40 percent approved of the governor's performance in office while 42 percent disapproved.

The poll had Pence's reelect number at 36 percent, with 49 percent wanting a new person as governor and 15 percent saying they didn't know.

That undecided group may turn out to be the political battleground for Gregg and Pence. Women under age 45 want a new governor by a 59-21 percent margin. Thirty-six percent of college-educated Hoosiers approve of the job Gov. Pence has done in his first term. Fifty percent disapprove.

On attracting jobs, the poll shows Pence at 39 percent and Gregg at 38 percent.

On who represents Indiana better nationally: Gregg had 39 percent and Pence was at 37 percent.

On the question of who could a better job improving education, 42 percent said John Gregg to 32 percent for Mike Pence.

- Thanks to Brian Howey