More perilous phase ahead for Biden after his 1st 100 days

Biden is racing against the calendar while governing with the most slender of congressional majorities. 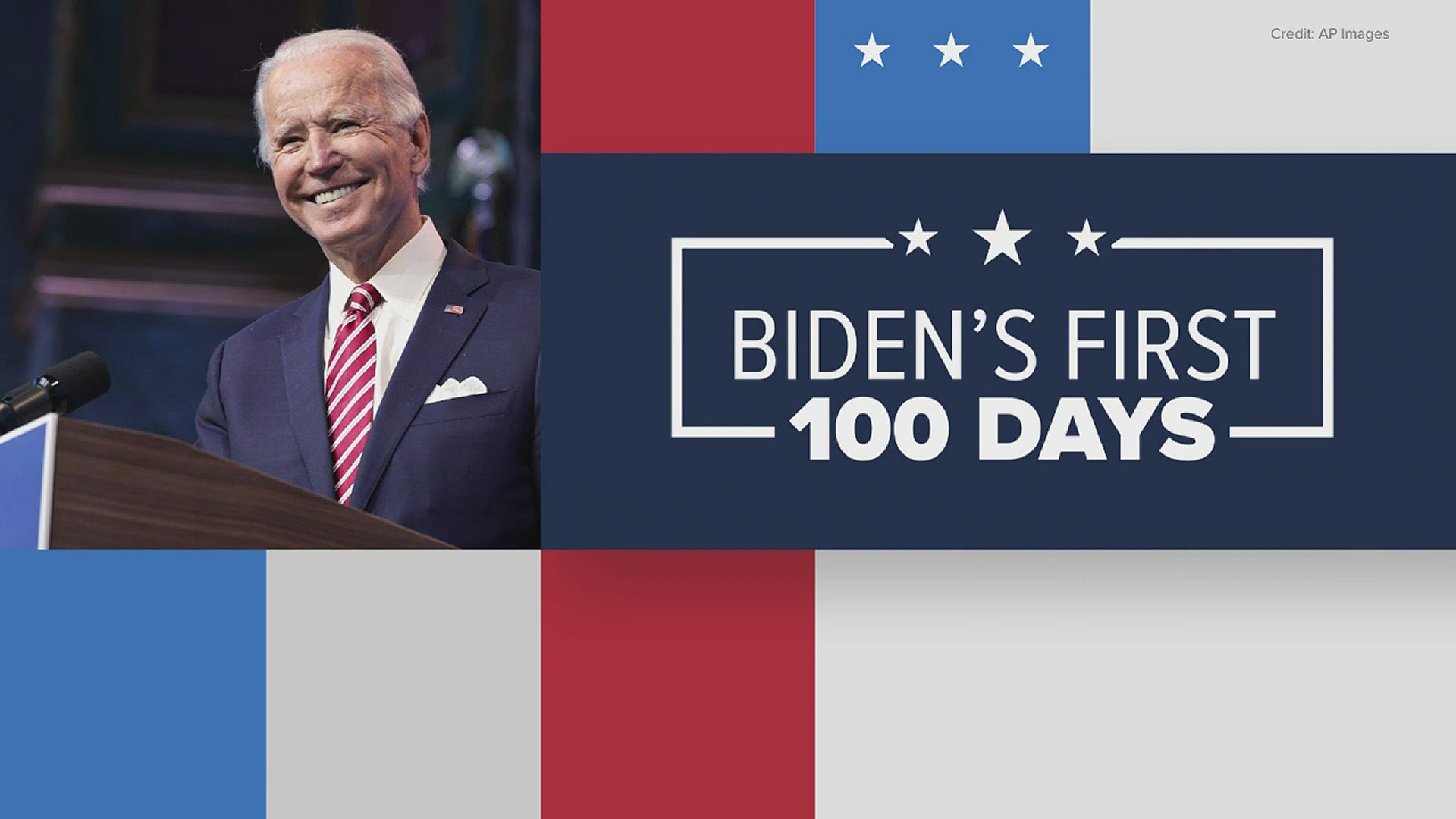 Joe Biden's presidency is entering a new and more perilous phase where he is almost certain to face stiffer Republican opposition and also have difficulty keeping Democrats united as he pushes for $4 trillion in additional spending on programs that have echoes of the New Deal and the Great Society.

Past the 100-day mark, with positive approval ratings and a far-reaching, nearly $2 trillion COVID-19 relief bill to show for it, Biden is now facing far more uncertain terrain. The president is racing against the calendar, governing with the most slender of majorities on Capitol Hill while knowing that historically the party that holds the White House loses seats in midterm elections, which would cost Democrats control of Congress after the 2022 vote.

His next 100 days will feature his first foreign trip but will be dominated by his push to pass his expansive plans on infrastructure and children, families and education, which would expand the social safety net for children, increase taxes on the wealthy and fund projects that his critics say are infrastructure in name only.

An ABC News/Ipsos poll showed Sunday that the country was, though, showing signs of optimism after the president's first 100 days in office. The poll showed that almost two-thirds of Americans, which comes out to about 64%, expressed optimism regarding the direction the U.S. is going, when polled.

Overall, Biden's approach is less about stimulating the economy than stabilizing it over the long term with middle-class jobs, and proving that a democracy, even a bitterly divided one, remains capable of doing big things.

"In another era when our democracy was tested, Franklin Roosevelt reminded us: In America, we do our part," Biden said in his address to Congress on Wednesday night. "That's all I'm asking. That we all do our part. And if we do, then we will meet the central challenge of the age by proving that democracy is durable and strong."

Biden has made personal overtures to Republicans in Congress, but the efforts were aimed at least as much at Republican voters, who have been far more supportive of his plans. A nod to bipartisanship is also important to reassure moderate Democrats such as Sen. Joe Manchin of West Virginia that the president is at least trying to win over Republicans, even if in the end he might push ahead without them.

His task may be easier given the hopeful signs of a strong economic recovery, with an annualized growth rate of 6.4% during the first three months of the year. With the relief bill passed, Biden's economic team is now able to focus on structural issues such as income inequality, systemic racism and shortfalls in public investment.

"These were ideas that were germinating pre-pandemic," said Heather Boushey, a member of the White House Council of Economic Advisers. "It feels like these are things that we've known we needed to do."

Several aides are now focused on distributing billions of dollars from the relief package for housing assistance, school upgrades and state and local government aid.

The administration also wants to measure the results of the spending to show Congress that its relief programs are succeeding.

One example: The expanded child tax credit is of critical importance because Biden has proposed extending the one-year increase through 2025 as part of his families plan.

"We know that implementing the enhanced child tax credit right is critical not just to cutting child poverty this year but to showing it can be done well so that it builds support for extending it on and on," said Gene Sperling, named by Biden to oversee the relief programs.

With such expensive and wide-ranging programs, Biden has not shied away from comparisons between his own ambitious legislative agenda and those championed by a pair of his Democratic predecessors, Franklin D. Roosevelt and Lyndon B. Johnson. When the $1.9 trillion COVID relief bill was passed in March, Biden gathered with Harris and a few senior staff members in the Roosevelt Room to watch the vote.

Biden recalled that it was in that room where, as vice president, he and President Barack Obama watched the final passage of the Affordable Care Act some 11 years earlier. But he remembered that room being packed with people, something impossible to do during the pandemic.

"If we didn't have COVID, we'd probably all be raising a glass together but instead this is what we are doing," Biden said, according to two White House officials who were not authorized to speak publicly about private moments.

The meaning was clear: Even in a moment of triumph, the pandemic was ever-present. But now, with virus cases falling and vaccinations spreading, Biden must guide the nation toward reopening from COVID-19 lockdowns.

He took a cautious step Tuesday by highlighting changing guidance from the Centers for Disease Control and Prevention on outdoor mask-wearing. More fundamental steps are ahead as Biden tries to guide the country toward resuming normal activities, fully reopening offices and schools and safely fulfilling pent-up demand for travel, dining and entertainment.

To this point,  the public has largely gone along. Gallup polling shows Biden's average approval rating over his first three months in office is 56%, higher than Donald Trump's at 41% but slightly lower than Obama's at 63%.

But Biden fares less well on some specific issues such as immigration and the border. West Wing officials were caught off guard by the rise in the number of migrants, many of them children, streaming across the U.S.-Mexico border, creating a humanitarian upheaval and handing Republicans a political cudgel.

"The border and immigration has been a huge challenge, and it will continue to be in the next 100 days and beyond," said David Axelrod, who was a senior advisor to Obama. "The president's desire to confront issues like gun violence and voting rights may continue to outstrip the capacity a bare Senate majority allows, which may anger his progressive base."

Biden has counseled patience to some of the left, stressing the importance of sequencing legislation, prioritizing the infrastructure plan before turning to thornier issues such as immigration, voting rights, guns and policing. The president blitzed through executive actions on those issues but will likely need cooperation with Congress for any meaningful action.

That won't be easy. The Senate Republican leader, Mitch McConnell of Kentucky, derided Biden's agenda as a "multitrillion-dollar shopping list that was neither designed nor intended to earn bipartisan buy-in, a blueprint for giving Washington even more money and even more power to micromanage American families."

There has been some bipartisan momentum on policing after the guilty verdict in the killing of George Floyd, a Black Man, who died under the knee of Derek Chauvin, a former Minneapolis police officer. But gridlock threatens other issues, with rising chatter from Democrats on Capitol Hill that a change to the filibuster may be needed.

"Things will begin to percolate on parallel tracks," said White House senior adviser Steve Ricchetti. "There is a lot of work on immigration and police reform and criminal justice reform being done in the committees and in the White House, we're engaged in serious, healthy dialogue. And then we'll see what's ready to go and when."

But Biden will also have to turn his focus to international affairs.

The defining relationship will be with China, which Biden invokes as an economic rival that can only be defeated if democracy is repaired at home. He has so far largely continued Trump's tough approach and maintained most tariffs.

He has ordered urgent help to India, a nation reeling from COVID-19. In a jam on Iran sanctions, the president will be forced to choose which Trump-era sanctions to lift in a bid to coax Tehran back into compliance with the its nuclear deal.

In June, he is scheduled to make his first trip overseas as commander in chief, heading to Britain for an economic summit and then to Brussels to pledge support to NATO, the military alliance built as a bulwark to Moscow's aggression.

And, while not finalized, negotiations are being held to add a third stop: a summit, elsewhere in Europe, with Russia's Vladimir Putin.